Without South Pass, the entire history of the United States’ expansion west of the Mississippi would have been different. South Pass got its name to distinguish it from the tedious and difficult northern route through the Rocky Mountains taken in 1805 and 1806 by Lewis and Clark through the Bitterroot Mountains.

As any aficionado of the Corps of Discovery knows, the Bitterroots nearly destroyed the dreams of that expedition. By the time the Corps stumbled out of the mountains, they were frozen and near death from starvation. Even today, few roads cross the Bitterroots, and the country between the great Missouri River and the mighty Columbia remains as topographically complicated as it was when Lewis and Clark crossed it. 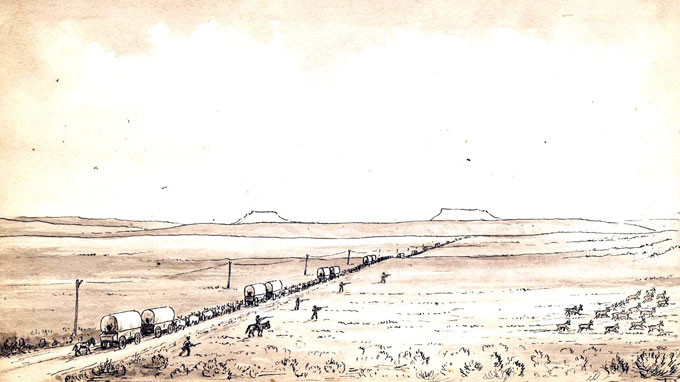 Thus, the discovery of a direct land route across the Continental Divide with a relatively easy grade was a godsend to those who hoped to see the United States of America stretch from the Atlantic to the Pacific. Without South Pass, it is almost certain that the Pacific Northwest would have been permanently claimed by the British and the southern part of the continent would have remained part of Mexico. South Pass, the isolated little saddle that straddles the Continental Divide in the midst of Wyoming, still the least populated state in the nation, truly provided the key to today's United States.

While the pass had been used by American Indians for millennia, the first known usage by white men occurred in 1812 when Robert Stuart and six companions crossed the mountains on their return to the East from Astoria at the mouth of the Columbia, on the Oregon coast. In 1832, Capt. Benjamin Bonneville and a caravan of 110 men and 20 wagons became the first group to take wagons over the pass.

This tiny trickle of white people would become a stream in the 1840s and a river in the 1850s and 1860s. Between 1841, when the first Oregon-bound wagon train was organized, and 1869 when the transcontinental railroad was completed, somewhere between 350,000 and 500,000 emigrants crossed South Pass on the trails bound for Oregon, California or Utah’s valley of the Great Salt Lake. Their multiple routes converged to form a common trail corridor near Fort Kearny in what’s now central Nebraska before parting again beyond Dry Sandy, a short way west of South Pass.

The Pony Express was established in the spring of 1860, and at its inception could carry a letter from St. Joseph, Missouri via South Pass to Sacramento, California in just two weeks. Construction of a transcontinental telegraph line began about the same time along the same route; by the fall of 1861 the line was finished and the Pony Express disbanded.

After 1862, much of the commercial traffic moved south to the Overland Trail, which crossed what’s now southern Wyoming by a more direct route, most of which later became the route of the Union Pacific Railroad and Interstate 80. The telegraph continued to follow the South Pass route until the late 1860s, when it was moved south to the railroad line. 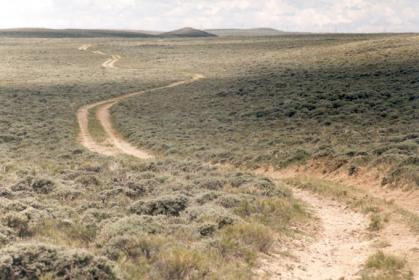 For westbound travelers, the push to the South Pass crossing started at Independence Rock, where their slow, steady climb over the Continental Divide began. Many didn't even realize the backbone of the Rockies had been conquered until they reached Pacific Springs west of the pass, so gradual was the incline.

And the exact elevation of that backbone has been disputed throughout modern times. Today, it is fairly well established that the crest of South Pass is situated on the Continental Divide in Fremont County, Wyo., about 10 miles southwest of South Pass City, at 42 degrees 21 minutes north latitude and 108 degrees 53 minutes west longitude, at an elevation of 7,440 feet above sea level, or 2,267.712 meters.

Until recently, however, there was a surprising amount of confusion about the elevation. The noted historian, Dale L. Morgan, gave its elevation as 7,550 feet above sea level, a figure that has often been cited though it actually reflects the elevation of the Continental Divide to the north of the pass. The U.S. Geological Survey’s Pacific Springs 7.5 minute quadrangle gives the elevation as 7,412 feet, as do many other reference works.

During a June 2006 field survey, Colleen Sievers of the U.S. Bureau of Land Management’s Rock Springs office took a Global Positioning System reading at the Meeker and Whitman monuments, normally considered to be "the summit," that produced a reading of 7,440 feet above average mean sea level, with an error factor of plus or minus three feet. 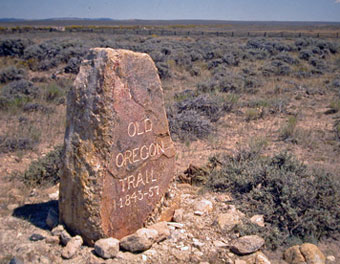 Trail expert Paul Henderson wrote of the Meeker marker, "This monument stands twenty feet west of the actual culminating height of the Pass where the old trail crossed the divide line," but did not explain how he determined that location. According to another well-known trail expert, Gregory Franzwa, the U.S. Geological Survey engineers surveying the Continental Divide in 1946 determined that Ezra Meeker--the pioneer promoter of preserving Oregon Trail history— missed "the precise location of the divide . . . by less than fifty feet."

Today, most people view the pass from the BLM's roadside exhibit, situated just off state Route 28. From there, it is possible to follow the old trail ruts next to the exhibit parking area to the actual summit which you will know you have reached, even without a GPS unit, by the two markers you will find there.

In 2014, the Lander Field Office of the BLM issued its Resource Management Plan covering its part of South Pass. The RMP limits rights of way to designated corridors, oil and gas development, and mining. It closes the area to phosphate mining, wind energy development, and limits sand and gravel quarries to spots not visible from the trails. It protects the existing character of the landscape and will keep future impacts low.

The West opens up for anyone who stands on South Pass.

WyoHistory.org thanks the Alliance for Historic Wyoming, which published an earlier version of this article. 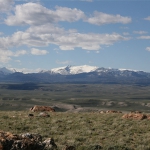 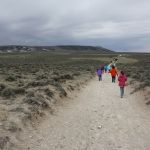 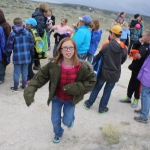 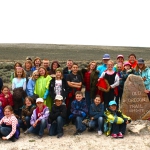