A love of adventure may have drawn many of the young men attracted to the fur trade and "a life more wild and perilous," as Francis Parkman put it, but the driving force behind the first American presence in the Rocky Mountains was purely economic: Without the fortunes that could be made in the fur trade, there was nothing to attract Americans to such a strange, distant and dangerous country. Once the mountaineers and the fur companies eliminated the region’s beaver population, there appeared to be nothing left to induce any rational person to live there. 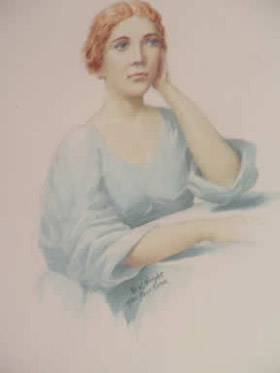 Mapmakers labeled the region "the great American desert." Americans who had seen the Rocky Mountains expressed an even lower opinion of the region’s potential. After a hard march to the fur-trade rendezvous in 1834, William Marshall Anderson found the face of the country from the North Platte River at the Red Buttes to his camp on the Big Sandy west of South Pass "barren in the extreme; it is sand and nothing but sand." It was one immense desert, "a true American 'Sahara,'"

Only something as unexpected as the discovery of a new source of wealth or as compelling as economics seemed capable of altering this reality. That force was power of religious faith, and it ultimately inspired more enduring consequences than the struggle to control the fur trade in the Rocky Mountains.

That transformative power arrived in the form of three missionaries who set out for Oregon in 1834 under the command of a broad-shouldered former Yankee lumberjack. Ironically, it was a request from natives of the Pacific Northwest that set these events in motion. In October 1831, fur trader Lucien Fontenelle brought four Salish and Nez Percé emissaries from the Oregon Country to meet with Indian Superintendent William Clark in St. Louis, who had first seen their country when he crossed the Rocky Mountains with Meriwether Lewis and the Corps of Discovery, decades before.

Clark understood that they had come to ask for someone to teach their people about the white man’s powerful book, which Clark interpreted as a request for a minister to explain the Bible. An account of the request appeared in the Methodist Christian Advocate in March 1833, which issued the call, "Let the Church awake from her slumbers and go forth in her strength to the salvation of these wandering sons of our native forests." Dr. Wilbur Fisk asked the Methodist Mission Board to send missionaries to answer the request, and the board provided $3,000 to fund the effort. Fisk recommended a former pupil at the Wilbraham Academy to lead the effort, and the Rev. Jason Lee was called to Oregon.

Along with several naturalists and adventurers, Lee, two more missionaries, and two hired hands joined Massachusetts fur trader Nathaniel Wyeth’s second venture to the West to deliver supplies to the Rocky Mountain Fur Company in spring 1834. Lee and his companions were the vanguard of a small but devoted band of Christian evangelists who accomplished something that had seemed entirely impossible. 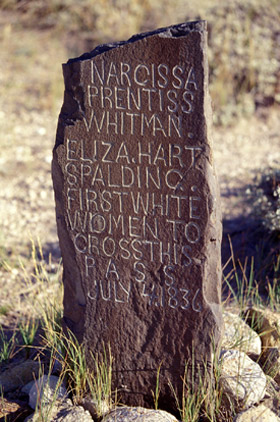 In 1835, the American Board of Commissioners for Foreign Missions (ABCFM) sent the Rev. Samuel Parker on what he called "an exploring mission" to Oregon to evaluate "the condition and character of the Indian nations and tribes, and the facilities for introducing the gospel and civilization among them." Parker set out for the far West on 22 June 22 with the American Fur Company’s supply caravan.

Assisting Parker was his young associate, Dr. Marcus Whitman, a man "of easy, don’t care habits, that could become all things to all men, and yet a sincere and earnest man, speaking his mind before he thought about it the second time," as William H. Gray, a carpenter Whitman hired to go west with him in 1836, recalled years later. As Gray observed, when he set his mind to doing something, Whitman was capable of unflinching tenacity. When Whitman made the journey again, in 1836, he was accompanied by his new bride, Narcissa Prentiss.

They crossed South Pass on July 3, 1836. The next day, July 4, the group stopped near Pacific Springs, knelt down, and with Bible and the American flag in hand, claimed the Pacific coast for their native country. Henry Spalding recorded: "The moral and physical scene was grand and thrilling. Hope and joy beamed on the face of my dear wife, though pains racked her frame. She seemed to receive new strength. 'Is it reality or a dream,' she exclaimed, 'that after four months of hard and painful journeyings I am alive, and actually standing on the summit of the Rocky Mountains, where yet the foot of white woman has never trod?'"

When they crossed South Pass, the missionaries Eliza Spalding and Narcissa Whitman "were in the vanguard of a great procession of men, women and children, who were to travel that same way" over the next three decades, wrote historian Clifford M. Drury. "They proved it was possible for women to cross the Rockies."

Whitman and Spalding showed that women could meet whatever challenges the West could throw at them, and if there were any remaining doubts, the next four American women to ride to Oregon on horseback—missionaries Myra Fairbanks Eells, Mary Richardson Walker, Mary Augusta Dix Gray and Sarah Gilbert White Smith—dispelled them in 1838.