Published:
Whether Oregon Trail emigrants took the westbound Sublette Cutoff at Parting of the Ways or the more southerly route toward Fort Bridger, the next water they had to cross was at Little Sandy Creek, running south through the sandy, sagebrush plains west of the Continental Divide.

The Sublette Cutoff crossed at a place where the creek was in a deep draw requiring a steep climb out of the valley on the west side. Five miles downstream, the Fort Bridger route crossing was an easy one, not very wide and with low banks on both sides.

Joel Palmer’s party took the Fort Bridger trail. “The road was over a barren plain of light sand, and was very dusty. … There is no vegetation but the wild sage, and it had a withered appearance. The night was cold, freezing quite hard,” Palmer wrote on July 19, 1845.

“Along this stream is a narrow bottom, covered with grass and willows,” Palmer wrote. “We are now out of the range of the buffalo, and although not often mentioned, we have seen thousands of these huge animals.” 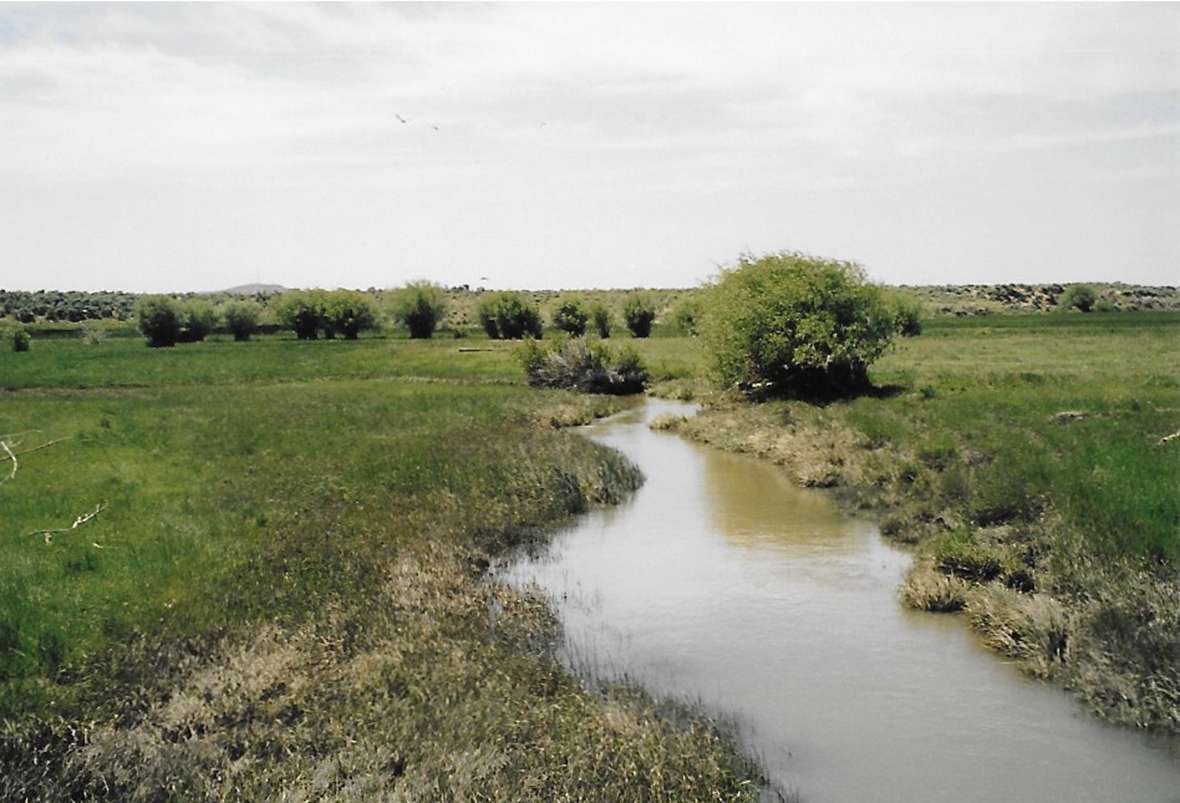 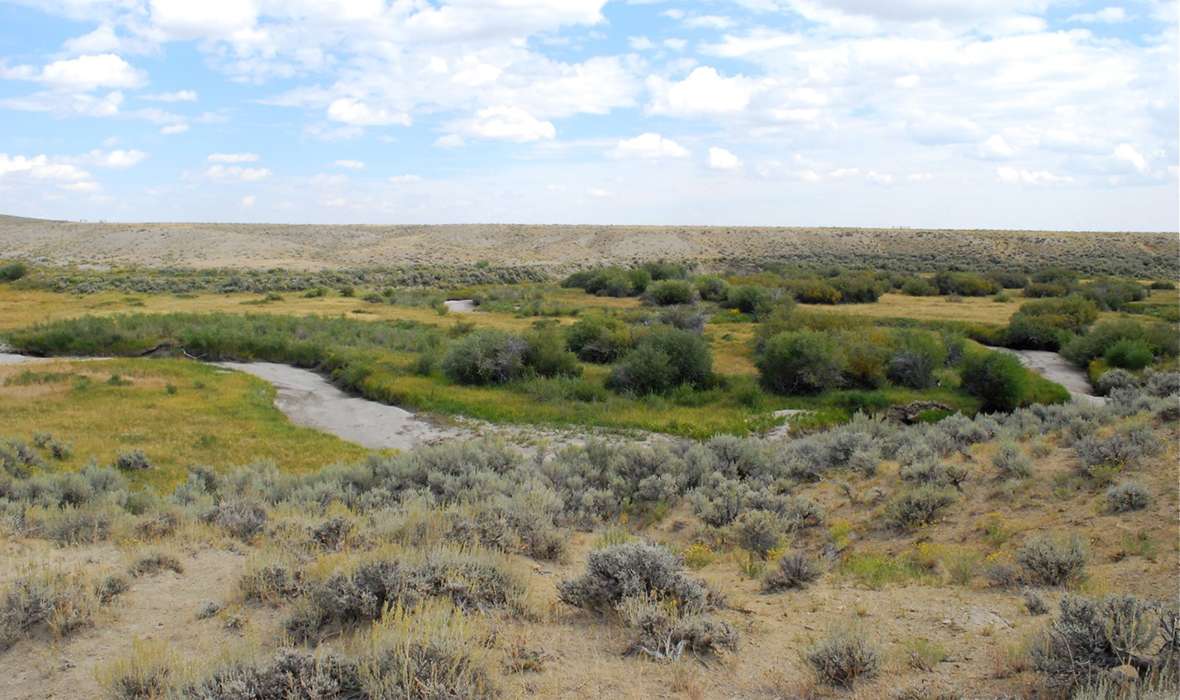 William Clayton, diarist with the first company of Mormon emigrants, reported the same barren landscape on June 28, 1847, traveling “over a desert land yielding nothing but wild sage and occasionally a grass root and weeds.” Clayton’s party had gone “thirteen and a half miles without signs of wood, water, or feed for our teams. This stream [the Little Sandy] is about twenty feet wide on an average but at the fording place over three rods, two and a half feet deep, muddy water and swift current.”

In the first year of the California Gold Rush, 1849, the passage of tens of thousands of emigrants and their livestock heavily impacted resources along the trails.. “Game, which before had been plenty, now entirely disappeared,” Forty-niner Alonzo Delano wrote June 30, after crossing South Pass. “On arriving at the creek, men and animals rushed to the water to quench their raging thirst.”

A week later, H.C. St. Clair’s party chose the Sublette Cutoff, on which “[t]he wind blowed from the west a gale. The dust was so thick a man could not see ten feet ahead. The land was so barren that nothing but moss would grow on it, of which I saw three kinds.”

“We camped on Little Sandy. Poor grass,” St. Clair added. “Willows for fuel. The creek is about 20 feet wide, 2 feet deep. The water is much like the Sweetwater.”

Plaintively, he added, “A gentleman whom visited the peaks told me that their base & sides was covered with luxuriant grass, pine trees & shrubs.” Grass all along the Oregon Trail, by contrast, was badly overgrazed.

“Can find no good grass,” commented Joseph Middleton on July 30, 1849. However, he continued, “This is a fine large creek. I bathed in it & changed my shirt. Very confined banks.” These high banks were characteristic of the Sublette Cutoff’s crossing at Little Sandy.

Though there was no forage where Middleton’s party crossed, “Goose berry bushes grow here as rank and thick as large berries among the long spindling clumps of willows that are plentiful.” The bushes had some fruit, “the color of huckleberries such as I saw on the devil’s den [Devil’s Gate]—but much larger.”

Despite berries in season, emigrants coming through the following year endured just as many hardships as those who had come before.

“Have been greatly disturbed by the sand & dirt,” William Rothwell wrote of the Sublette Cutoff on June 28, 1850.

Allen McClure’s party also followed the Sublette Cutoff. On July 8, 1853, McClure wrote that at Little Sandy “our half-perished animals got water. They have traveled since leaving Pacific Creek, yesterday evening, more than twenty miles without water and with but little grass. This country begins to assume the character of a desert.”

Six years later, travelers were still coming through. On July 5, 1859, Thomas Cramer wrote, “[N]o game here except a few sage hens, a splendid cock bird of which species was shot by Joe Smith. It is as large as a well grown turkey and nearly as beautiful as a golden pheasant.”

A Pony Express and stage station was established on the west side of the Sublette Cutoff crossing by 1860. Thirteen emigrant graves are located nearby. The line of the transcontinental telegraph, which put the Pony Express out of business, followed the Fort Bridger route. On July 1, 1862, diarist James Yager found that the telegraph station at the Fort Bridger crossing of the Little Sandy included “squad of soldiers” posted there to guard it.

Two of the most famous of all the emigrant parties to come west saw iconic moments near the Fort Bridger crossing of the Little Sandy. In 1846, about five miles downstream, George Donner was elected captain of the party that met a tragic end months later in the Sierras of California.

Late in June 1847 mountain man, guide and trapper Jim Bridger camped with Brigham Young and the first of party of the Church of Jesus Christ of Latter-day Saints—the Mormons—about two miles west of the Fort Bridger crossing. Deeply skeptical of their enterprise, Bridger supposedly offered the Saints $1,000 for the first bushel of corn grown in the Salt Lake Valley.

A marker for the Little Sandy Crossing, erected by the Utah Pioneer Trails and Landmarks Association, is located about 8 miles southwest of the actual crossing on the west side of U.S. Highway 191, 50 yards north of its intersection with state Route 28 in Farson.

Jim Bridger meets Brigham Young and the first Mormon emigrant party a mile and a half west of the Little Sandy crossing.