The Ninth and Last Crossing of the Sweetwater

The Ninth and Last Crossing of the Sweetwater

The ninth and final crossing of the Sweetwater River was variously called Gilbert’s Station, Upper Sweetwater Station and South Pass Station. In 1849, travelers who had reached this point found traders, including Jim Bridger, ready to sell them horses, oxen, bacon and buffalo robes.

The Sweetwater here is a fast-rushing mountain creek, thickly bordered with willows but very few trees. Many diarists noted the beauty of the place. On June 26, 1847, Orson Pratt, diarist with the first Mormon company to cross the mountains, wrote “It was quite interesting to see an abundance of good grass intermixed with various plants and flowers upon the bottom of this stream, while upon the same [creek] bottoms, and only a few yards distant, were large banks of snow several feet in depth.” 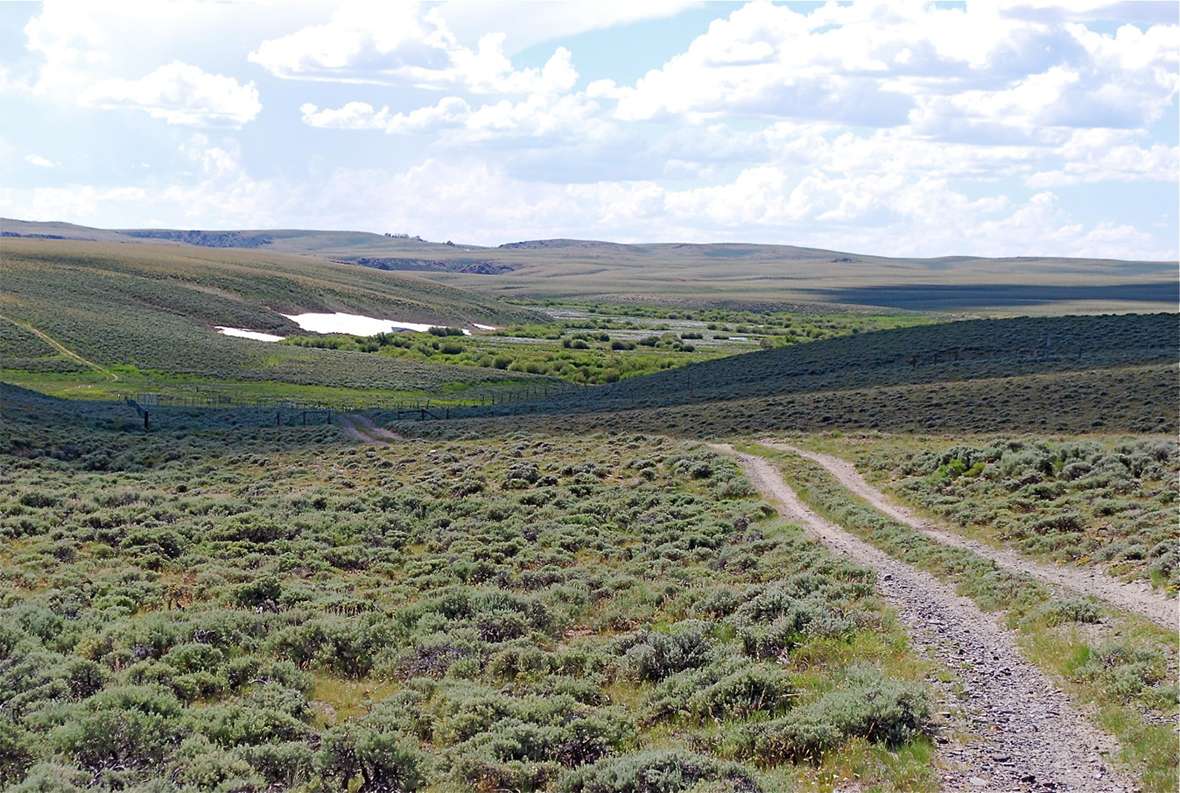 On July 1, 1849, Thomas J. Van Dorn’s party camped at the crossing. “The Sweetwater is clear as crystal here and deep and very rapid. Turned out at noon. Saw a kind of long leafed clover on the bottoms – not plenty. Snow lays along all the ravines bordering the river. To our right some 15 miles the snow capped mountains of the Wind River range are in view. Evening cool and overcoats are not uncomfortable.”

Van Dorn concluded, “The clear, cool atmosphere we experienced in this mountain range is bracing and pleasant.”

Not all the travelers felt so refreshed. On the same day, H. C. Mann commented, “We are now on the banks of the Sweetwater for the last time and shall not camp again on this side of the Rocky Mountains and we are not sorry for it.”

Some emigrants had an eye for rocks and minerals as well as plants. In an undated entry, possibly from 1850, Dr. Carmi Garlick noted, “Many of the emigrants were much deceived by the yellow mica in the river, supposing they had found gold. It really makes a beautiful appearance, flashing in the sunlight.”

Like others before him, Garlick “found flowers within 10 feet of the snow. In passing up the river today, I found many such banks on the north sides of the hills. I gathered strawberries within one hundred yards of them. The rocks of the ridges are of the argillaceous schist and shale.”

John Riker gave an account of one party’s crossing, on June 11, 1852. “Here we find hundreds preparing to cross. The emigrants have here constructed a temporary ferry of logs and poles, pinned together.” The river, he noted “is very high; consequently crossing in this way is attended with considerable danger.”

“Here is a severe trial to the ladies,” Riker’s account continues, “who are accompanying their husbands, fathers, or brothers to the far-off west. Some of them bear all with fortitude, while others give expression to their feelings by tears and wringing of their hands. Many gazing upon these angry waters would fain turn back—would return to meet their friends at home; but by reflections we know that even in this there is danger. The destroyer, cholera, is in our rear and is fast gaining upon us.” Cholera did in fact take a great many lives on the trail that year.

About a month later, on July 7, Richard Keen reported his company’s safe crossing without a raft. Others, he noted, were not so fortunate. “Another train then undertook to ford after us upset one of their wagons and lost all their provisions. The brandy keg was then brought forth and all indulged more or less.” 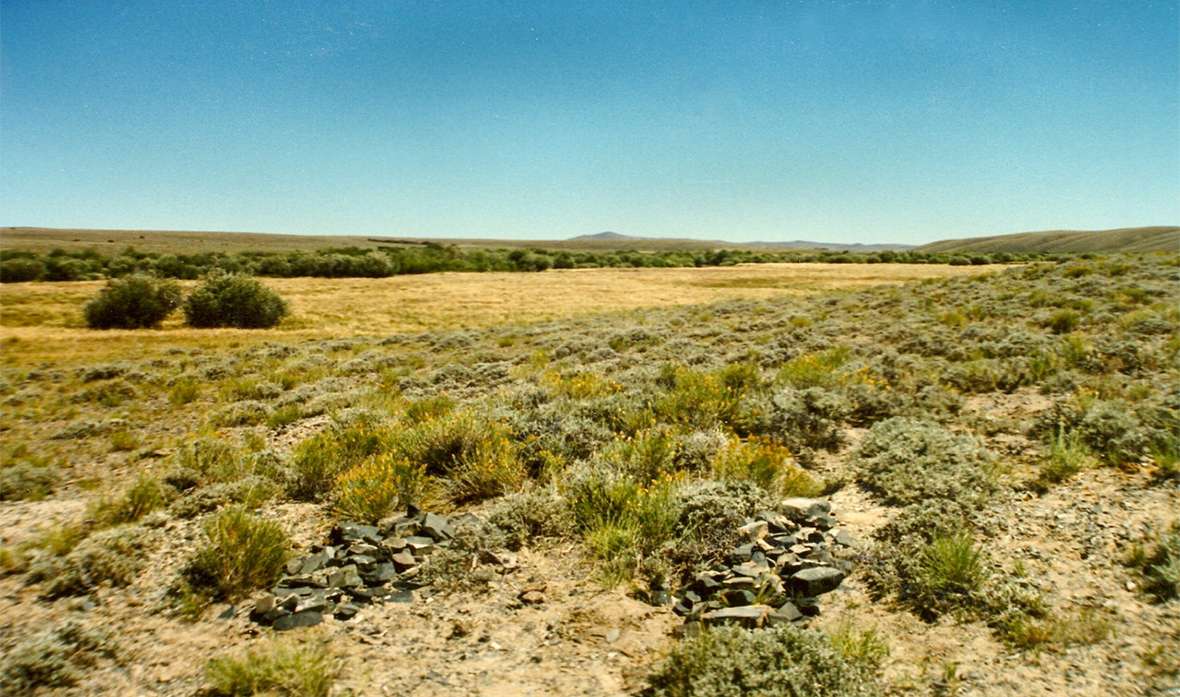 By 1859, emigrants were mentioning the Lander Route. This was a government-built road that bypassed Salt Lake City, routing travelers straighter west from South Pass and ending up in Fort Hall in present southern Idaho.

On July 5, 1860, Allen Tyrrell observed signs of a new civility at the crossing. “There was a trading post and mail-station here. A couple of white women lived here … One of them is the trader’s wife, the other is not married. There was an air of taste and neatness about the premises and the occupants seemed to live comfortably.” 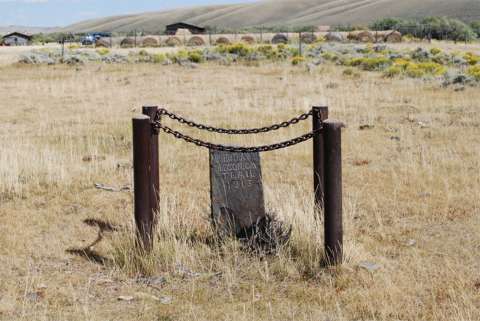 Later that summer, and with an unmistakable tone of nostalgia, British adventurer and travel writer Richard Burton wrote on Aug. 20, “At Ford No. 9. We bade adieu to the Sweetwater with that natural regret which one feels when losing sight of the only pretty face and pleasant person in the neighborhood; and we heard with a melancholy satisfaction the driver’s tribute to departing worth, viz. that its upper course is the ‘healthiest water in the world.’”

Almost two years later, on July 29, 1862, John Clark wrote, “At the Sweetwater Crossing is the headquarters of the soldiers stationed along here for two hundred miles.” Units of the Sixth Ohio Volunteer Cavalry, later reconstituted as the 11th Ohio, were stationed there until 1868 when they abandoned the post. Soon after, the Indians burned it, and the place became known as Burnt Ranch.

A number of emigrants are known to have been buried in this area, including Charles Miller, Joe Barnette, and a Mrs. Bryan. Unfortunately, several of the graves have been vandalized.

The land is now privately owned.

Waiting to cross the Sweetwater at Ninth Crossing, diarist John Riker writes, “The destroyer, cholera, is in our rear and is fast gaining upon us.”

At Ice Slough, not far from the Sweetwater River on the Oregon, California and Mormon trails, covered-wagon emigrants were often surprised to find a thick layer of clear ice buried 8 or 10 inches under a layer of boggy turf. A historical marker on the north side of U.S. Highway 287/Wyoming 789, nine miles west of Jeffrey City and 10 miles east of Sweetwater Station, commemorates the spot.