Dry Sandy Crossing, about 10 miles southwest of Pacific Springs, was a creek in early summer and a dry, sandy bed later in the season. When it was dry, Oregon Trail emigrants often dug shallow pits or "wells" in the ground to reach the water below—usually brackish and alkali. As a result, few people camped there.

During the later years of the emigration, according to some accounts, Mormons camped here throughout the season, maintaining the wells and selling the water to the passing emigrants. This gave rise to the name Mormon Wells. There was also a stage station here, which during in 1860 and 1861 served briefly as a Pony Express relay station. Traces of it remained into the 1940s, but are now gone.

“[B]y digging to the depth of one foot we procured water,” Oregon-bound Joel Palmer wrote on July 19, 1845. “[B]ut it was brackish. … A white sediment, such as we had noticed elsewhere on the road, covered the surface of the ground.” 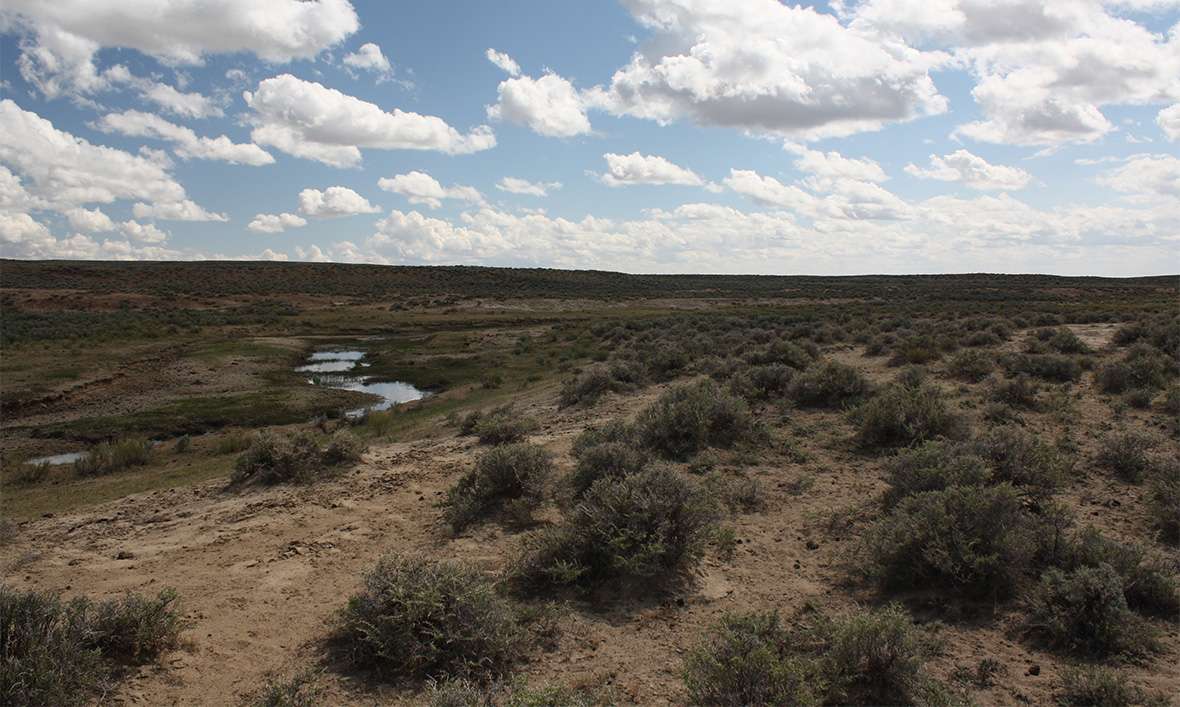 Four years later, on June 30, 1849, California-bound Alonzo Delano captured the ambiance of the place. “Once in every mile, at least, we saw the carcass of a dead ox, having closed his career of patient toil in this land of desolation in the service of his gold-seeking master, to become the prey of ravenous wolves, or food for croaking ravens, which covered his dead body, screaming at our approach.”

Wakeman Bryarly’s party, passing on the same day, must have arrived in time to benefit from the spring runoff. “Dry Sandy river ... has no water in it in the dry seasons, but now it is quite a stream,” he wrote. Despite warnings that the water was bad, Bryarly and his guide “allowed our horses, which were quite thirsty, to drink freely. We have not yet seen any bad effect from it.”

Just four days later, on July 4, Patrick McLeod found the water “unfit to use,” and reported another adversity as well. “Such a swarm of gnats assailed both men and animals, that we were forced to march off in double grand time and leave them master of the field.”

“They seemed to rise in black clouds from the sandy surface of the earth,” McLeod continues, “insinuating their tiny bills at all vulnerable points—neither blankets, or coats could defend the unfortunate victims of their attacks. Nothing but a speedy retreat could the sojourner make.”

“A miserable excuse for a creek, ” Forty-niner Israel Lord wrote on July 22 of that same summer.

Maj. Osborne Cross, in an undated entry, possibly from 1849, described the terrain just east of Dry Sandy. “We passed through a barren, sandy waste, slightly rolling in places, extensive plains in other parts of it, until we were compelled to stop on the banks of Dry Sandy in consequence of several of the mules giving out.” Cross adds, “At this place water and grass were very scarce, and both men and animals fared badly.”

On Aug. 3, 1849, J. Goldsborough Bruff found an unexpected source of good water. “Crossed 4 dry sandy ravines, and reached a tank [a well dug by emigrants], within 10 paces of the trail, on the right;—It was dug square, containing good cool water, with probably a fine clay held in suspension. …”

Other diarists seem not to have found this well. The next summer, on June 4, 1850, after arriving at “Dry Sandy Creek,” Mendal Jewett commented, “Water good when running snow water.”

That year, the water apparently became unpalatable by June 16, when James Shields wrote, “The water is neither good for man or beast. … It is very strongly impregnated with alkali.”

Poor water was not the only problem, as John Steele noticed on July 14, 1850. “[A]bout midnight we crossed Dry Sandy, the channel containing only some ponds of stagnant water, and the wagons sinking deep in the soft sand.”

Ten days later, on July 24, Henry Puckett commented with obvious distaste, “[W]e came to the Dry Sandy River—correctly so called, for we found it simply a dry, sandy ravine, where a river might have been but for the absence of water, except a little sluggish branch of strongly alkaline water, tasting very much like weak lye.”

Not much had changed by July 8, 1853, when Andrew S. McClure wrote, “Dry Sandy is the bed of a wet weather stream, which during the dry months contains a little water which is strongly impregnated with alkali and kills much stock—the emigrant should avoid it.”

“There is little growing here except sagebrush,” George McCowan noted on June 25, 1854. “The sandy ground is thickly inhabited by little animals similar to prairie dogs but not quite half as large. Their cry is like that of a small bird. We are beginning to pass dead cattle quite frequently and occasionally some that have been left to die. Sore feet and alkali the prevailing trouble.”

The Dry Sandy Swale is one of the most pristine remnants of the westward trails. The heavy Dry Sandy Swale pull required by the sandy landscape left a groove in the ground that is approximately 100 feet wide and six feet deep.

Unlike so many other stops on the road to Oregon, California and Utah, the  Dry Sandy Crossing did not lose its importance once most east-west traffic stopped on the historic trails. After the transcontinental railroad was completed in 1869, Dry Sandy Station became a regular stop on the stage route from the Union Pacific at Bryan and later Green River, Wyoming Territory, over South Pass to the Wind River country and beyond. Stages ran daily, from 1869 to 1885; the 145-mile ride from Green River to Camp Brown, at present Fort Washakie in the Wind River Valley, took 36 hours. 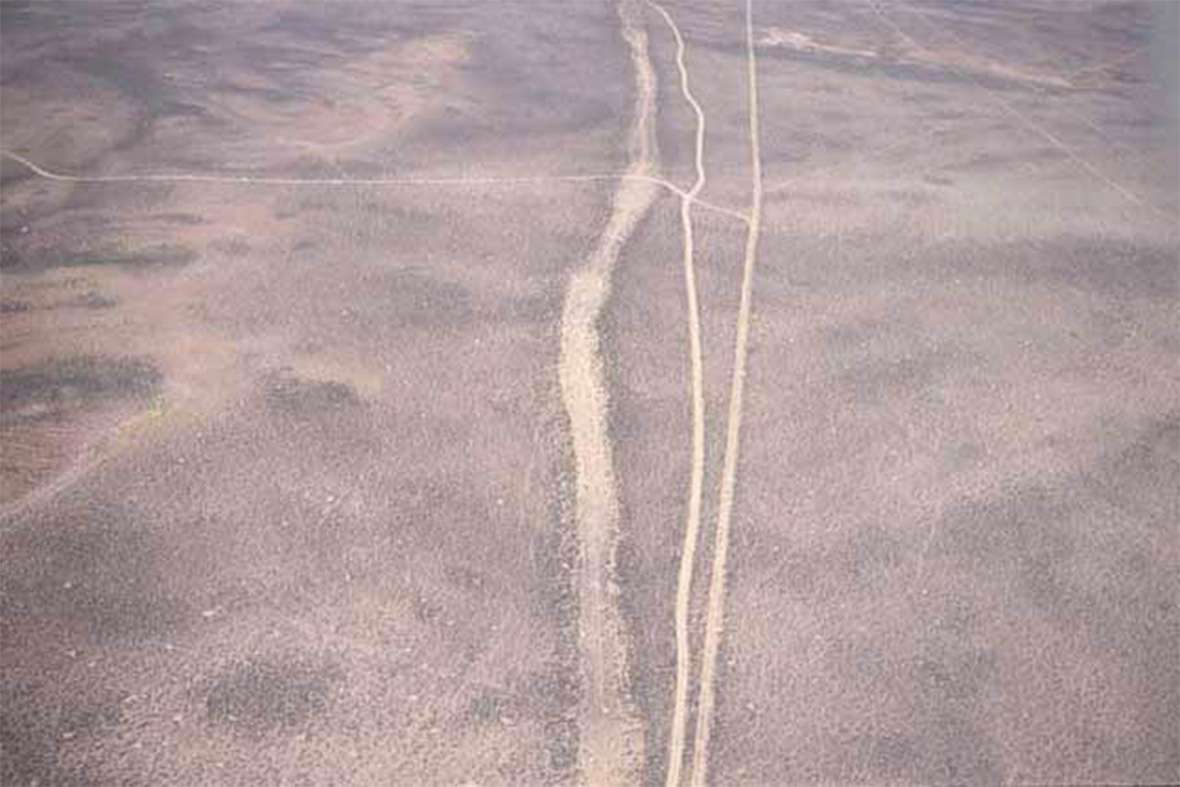 Forty-niner Israel Lord describes the Dry Sandy as “a miserable excuse for a creek.”