Just beyond the wide, low summit of South Pass stand the Oregon Buttes—two flat-topped hills and a smaller, conical one. To Oregon Trail travelers coming from the east, the buttes dominated the horizon for a day’s travel or more as they crossed Rock Creek, then Willow Creek and, for a ninth and final time, the Sweetwater River.

Standing as they do just beyond the pass, these buttes marked the earliest pioneers’ crossing from the United States into the Oregon country, claimed jointly by the United States and Great Britain until the United States acquired it by treaty 1846. West of the pass, travelers were in what soon became Oregon Territory. The name “Oregon Buttes” remains on maps to remind us of these shifting claims. 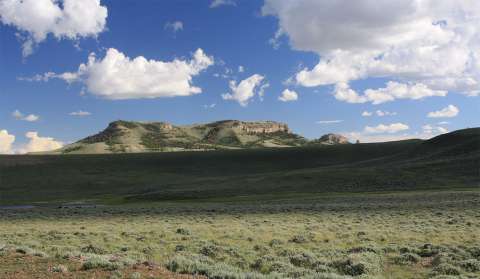 “Today we set foot in the Oregon Territory, the land of promise,” Theodore Talbot wrote in 1843. But his journey had made him wary, and thinking perhaps of previous weeks’ hard travel, he added, “As of yet it only promises an increased supply of sage and sand.”

Most early travelers on the trails, however, appear to have used a more physically descriptive name for the buttes: Table Rock, or Table Rocks.

“In the afternoon came in sight of three buttes … to the left,” California-bound Thomas Evershed wrote in June 1849. In that high, wide-open country, the road was smooth and hard and made for easy traveling. “With the exception of some sharp hills & the rocky ridges the road has been for the last two days superior to any McAdamized road I ever saw & composed of fine gravel hard & firm & altogether from the states I doubt if taking away the bridges there could be so good a road found of equal length.”

Joseph Warren Wood turned his journey into a nature walk on July 3 of that year. “We are now in Oregon,” he wrote. “At noon I started in co[mpany] with Allan for the Table rock on the south side of the pass. We passed over 4 or 5 miles of arid plain when we came to a steep high bluff with snow on one side, a small cool stream of water ran from it, through a grove of poplar. The birds were singing in the branches, the grass was green & it was a beautiful spot to spend a little time. … We climbed the snow bank & hill with considerable difficulty—went down into another valley & in 4 or 5 miles came to the foot of the rock. It was higher than I had anticipated finding it & after an hour’s severe toil we found ourselves upon the top. It was clad with pines & the ground was covered with cones. The area of the top would amount to several acres. It was connected by an isthmus with another still higher elevation on the south. … The views from it was grand & imposing. It seemed as though we could see 200 miles in almost any direction, on the W & S & North the view was bounded by Mts. On the east by distance.”

Near the end of July 1849, Joseph Middleton tried out a new name for the hills. “About 7 miles from the river we come opposite the two insulate truncated hills with horizontal tops which I mentioned far ahead yesterday afternoon. They are a few miles south of the road. ... I call these flat top’d hills M’s [Middleton’s] tables.”

Emigrant diarist Byron McKinstry, always a careful observer, included the buttes as part of a clear description of South Pass topography July 9, 1850. “In 9 ½ miles from the Sweetwater [on a] gradual rise we came to South Pass of the Rocky Mountains, 7,085 ft. above the sea. I could hardly tell where the summit is. We rise gradually to a ridge, then flat for nearly a mile, then another slight elevation. It has nothing of a mountainous appearance, almost a plain, barren, the soil is decomposed granite from the size of a hens egg to the finest sand. The sage is small, the prickly pear has entirely disappeared, and all the beautiful flowers of the Platte. The Wind River Mts. Rear their hoary heads to the N. of the Pass – a singular kind of table hill to the S., leaving a pass 18 or 20 m. wide.”

Passing the same spot, John Steele was similarly impressed just three days later. He and a companion thought at first they would climb Fremont Peak in the Wind River Range to their north. That proved to be too much of an undertaking. Still, he noted, “[W]e obtained a grand view of the road, with its long lines of emigrant wagons, the valley of the Sweetwater, the South Pass and Table Rocks.” Thanks to the California gold rush, that year was one of the two most crowded ever on the emigrant trails; 50,000 made the trip, of whom 44,000 were bound for California. A few days later, Steele would find about 100 tents pitched at Pacific Springs, just west of South Pass.

First, however, he was struck by the look of the pass, which “instead of being a shadowy mountain gorge, is a broad and beautiful prairie, somewhat undulating, with here and there a snow bank glistening on its green surface. … The Table Rocks rise about twelve hundred feet above the South Pass, southward; the top is apparently miles in extent and level as a floor, supported by immense cliffs, and inaccessible from the west; but there are places toward the Pass where a person may climb to the summit.” 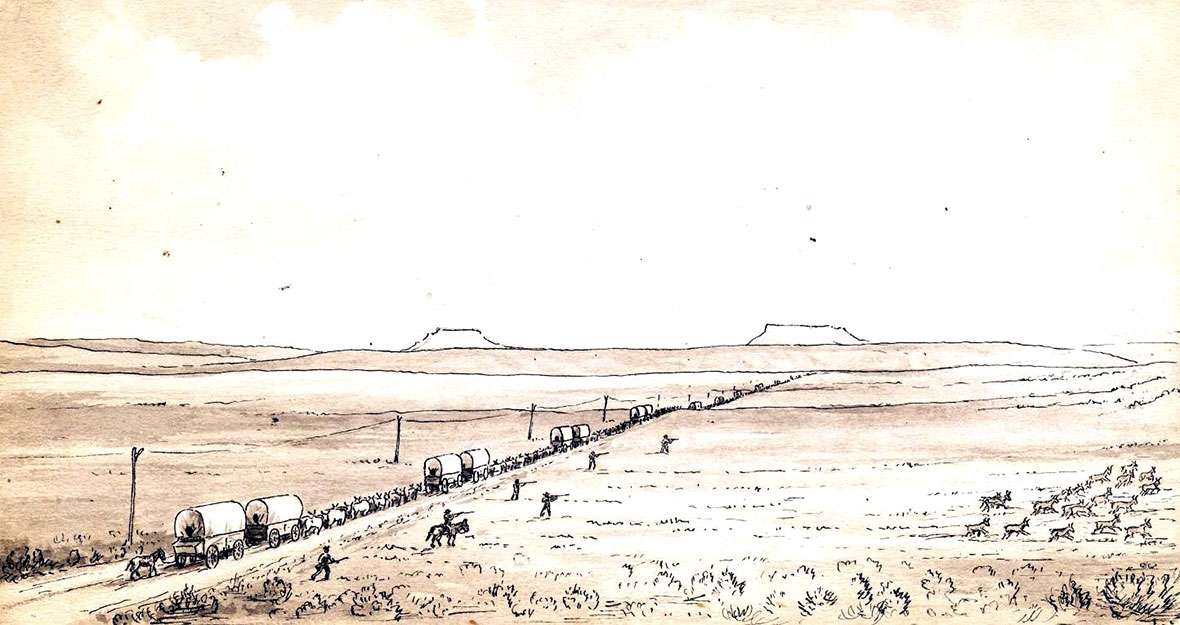 “I could hardly tell where the summit is,” Oregon Trail diarist Byron McKinstry writes as he crosses South Pass.