Beginning in the late 1840s, most westbound Oregon Trail travelers crossed the North Platte for a final time on a ferry or, later, a bridge, near where the present bridge between Casper and Mills, Wyo., spans the river now.

Others kept to an older pattern, staying on the south side 10 more miles to Red Buttes; some crossed several miles earlier and encountered sandy traveling along the river’s north side.

Those who crossed at present-day Mills found the road rose steeply, with laborious “wheeling,” as one put it, through deep sand. Soon the surface became hard and smooth, though often dusty, as the road headed southwest, away from the river and toward the Sweetwater and the Continental Divide. After about 10 miles, the road ran through a shallow pass in a ridge, now known as Emigrant Gap. Emigrants themselves do not appear to have used this name, however. 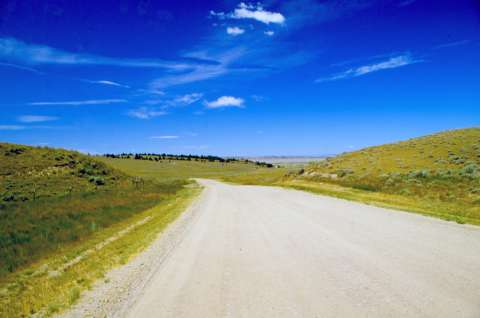 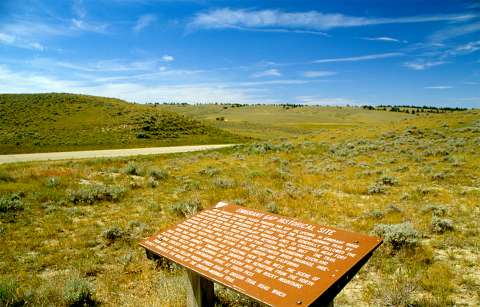 Shortly after passing through the gap, the road descended a short, rocky and difficult hill. At the bottom was Mineral Lake, a small pond with water reputed to be poisonous.

“The trail here finally leaves the Platte river,” diarist Edwin Bryant wrote July 6, 1846, after ascending the bluffs; perhaps he was glad, at first, of the change in scenery. But on top of the bluffs he found “an arid plain, the only vegetation upon which is the wild sage, grease-wood, and a few perishing plants,” along with “immense piles of rocks … These, with deep ravines, and chasms, and wide-spread sterility and desolation, are the distinguishing features of the landscape.”

Three years later, emigrant Peter Decker on June 9, 1849, noticed cactus in a crevice in the rocks. “Dust blown in road in places white like snow with Alkali,” he wrote. “Here is a very extensive & beautiful view of bluffs, hills, ravines & mountains rising one above the other until the view is lost in the vast space the eye discovers on either hand.”

Two weeks later, Byron Otis Smith found the scenery colored by loss. “We left the river with saddened hearts to see our friends of Ill [Illinois] repacking their loading and selling some of it a great sacrifice to obtain money to take them the rest of their journey as all their money was in the possession of one of the drowned men. … We saw no water fit to use today except a very strong mineral spring, but we past a number of alkali springs and ponds all of which were more or less encrusted with saleratus,” he concluded, referring to the white stuff like baking soda that rims shallow, alkaline ponds on the prairie and is often left when the water dries up.

A few days later, however, H.C. St. Clair and several others in his party ignored the warnings in the Mormon guidebook, “drank freely” from the mineral pond “and felt no bad affect of it. When it is rilled [perhaps “roiled”] it turns black.”

In account after account, diarists note similar features: a steep, sandy ascent, followed by a hard, smooth road, “as well beaten & traveled as the turnpike between London and Edinburgh,” Joseph Middleton wrote in July 1849. Seven or eight miles farther along, some unusual rocks came into view. John Barker in 1850 found them “like boulders standing on tiptoe points, upon high rocky columns.”

The diarists often remarked on the one changeable factor, the weather. “Several squalls of wind met us sweeping off some of our wagon covers and cleaning the roads,” Pusey Graves wrote July 4, 1850, “filling the air with a thick compound mixture of filth almost blinding and choking us with the clouds of dust. We passed the Mineral Spring and Lake a distance of 12 miles from the ferry.”

When there was time for a joke, it was a closed-mouth, dust-ridden kind. “[T]his is called “rattle-snake hill,” John Hawkins Clark wrote June 23, 1852, “but why so called I am unable to say; we saw none; it would be very hard on the snake if he was obliged to made this hill a home.”

Oregon Trail diarist John Hawkins Clark writes that Emigrant Gap was known as rattlesnake hill, “but why so called I am unable to say; we saw none; it would be very hard on the snake if he was obliged to made this hill a home.”