At Red Buttes, west of present Casper, Wyo., the North Platte River narrows, swings to the south and runs between thick, sandstone beds of a deep, brick red. Here, westbound travelers on the Oregon Trail left the Platte and struck out southwest for the Sweetwater River and the Continental Divide. This dramatic spot quickly became a well-known landmark both for its beauty and for the fact that it marked the end of one stage of the journey and the start of another.

Long before Euro-Americans had begun arriving, however, the buttes were an important boundary marker, dividing some tribes’ customary territories from others. 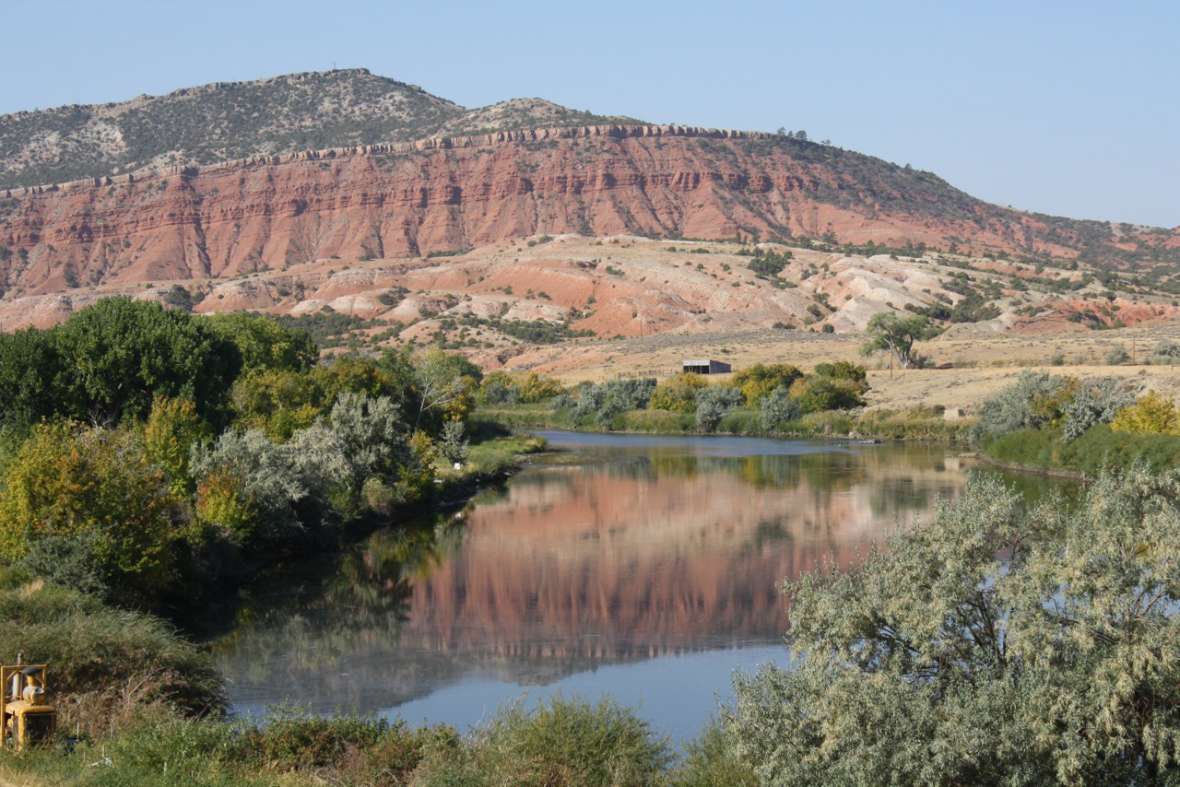 At the foot of the buttes the trail forded the river. This was the primary crossing point of the upper North Platte during the fur-trade era through the mid-1840s. High water came in late June. By late July, the river was much shallower and crossing was much easier.

“We recrossed the Platte again,” fur trapper and diarist Warren Ferris wrote in June 1830, “on the eleventh, at the Red Hills, —these are two high cherry-red points of rock, separated by the river, which here turns away to the southward. On the next day we left the Platte … and pursued our never-varying course, westward, through a sandy plain, covered with sage, and at evening encamped near a fine spring.”

Lt. John C. Frémont of the U.S. Corps of Topographical Engineers was more precise in his description than most travelers. “There was two hundred feet breadth of water at this time in the bed,” he wrote of his July 29, 1842, crossing, “which has a variable width of eight to fifteen hundred feet. The channels were generally three feet deep, and there were large angular rocks on the bottom, which made the ford in some places a little difficult. Even at its low stages this river can not be crossed at random, and this has always been used as the best ford.”

During those early years of trail travel, emigrants often noted the good grazing to be had nearby for their draft animals, and often reported big herds of bison as well.

Already by 1846, however, trails traffic was growing steadily.

Former mountain man Jim Clyman, a veteran traveler, was headed east on the trail in June 1846 when he found the Red Buttes crossing congested with emigrants: “[W]hen we came in sight of N. Platte we had the Pleasant sight of Beholding the valy to a greate distance dotted with Peopl Horses cattle wagons and Tents their being 30 wagons all Busily engaged in crossing the River which was found not to be fordable and with the poor material they had to make rafts of it took two trips to carry over one wagon with its lading we however ware not long in crossing as we threw our baggage on the returning rafts and swam our animals over and encamped once more in the Buisy humm of our own Language.”

As Clyman may be implying, Red Buttes was not just a river-crossing point for emigrants; it was already a crossroads for cultures. By Frémont’s time, the Buttes were well understood as a western boundary of Lakota Sioux power and an eastern boundary of Shoshone power.

William Carter, on his way to becoming sutler—head storekeeper—at Fort Bridger and later one of territorial Wyoming’s most prominent politicians and landowners, was more specific when he passed in 1857: “The Red Buttes … serve as the corner of the territories of several tribes of Indians who often meet here on their hunting expeditions,” he wrote. “The Cheyenne and the Arapahoes, a number of whom we saw at Reshaw’s [Bridge, 10 miles downstream], owning the south side of the river. The Sioux owning the north of the river up as high as the Red Buttes, and the Crow and Snakes [Shoshone] west of them.”

Few of the emigrants, however, were as aware as Carter of distinctions among the tribes. Many, when they got to Red Buttes, probably felt much like Rebecca Ketchum did in June 1853.

“I believe we have left the Platte River for good,” she wrote in her diary, “and I am glad indeed. We have been so long on it.” Most emigrants by this point had been following the Platte and the North Platte for 500 miles or more. “There is so little beauty about it, and we are so much afraid to drink it on account of its being unhealthy that I have grown heartily sick of it.” To the west, though, lay less water, lots more sagebrush, mountains, many more dangerous river crossings—and Oregon.

The Bureau of Land Management’s Red Buttes interpretive site is located on a picturesque bend of the North Platte River west Casper, Wyo. Follow CY Avenue west from Casper. From the intersection with Wyoming Boulevard, continue west on CY Avenue/Wyoming Highway 220 for 7.9 miles. Near mile marker 106, turn right on County Road 308/Bessemer Bend Road. In 1.5 miles, the road turns 90 degrees to the right onto “Bessemer Bend South.” Continue around the curve to the left and cross the river. The BLM interpretive site is on the right just after you cross the river.

The former site of Bessemer is located approximately 12 miles southwest of Casper. From Highway 220, turn west onto Natrona County Road 311 and head west toward the North Platte River. The town site was about half a mile west of the west end of the bridge. No original buildings remain, and most of the land is privately owned. An interpretive site at the Speck-Bessemer Float Access Area features a short trail and signs about the general history of the area.