Most travelers on the Oregon Trail never strayed from their route unless they had to. Some, however, made time for sightseeing.

Two miles south of the trail, about 12 miles southwest of present Douglas, in Converse County, Wyo., La Prele Creek flows under a large, natural arch of limestone. A dam was constructed a short way farther upstream in the early 1900s; around the same time a modern road was built to the site. Before that time, visitors to the natural bridge had to climb down steep canyon walls and fight their way through heavy brush on the canyon floor. Few bothered; there are only a handful of accounts—but from them it’s clear the place left a permanent impression. 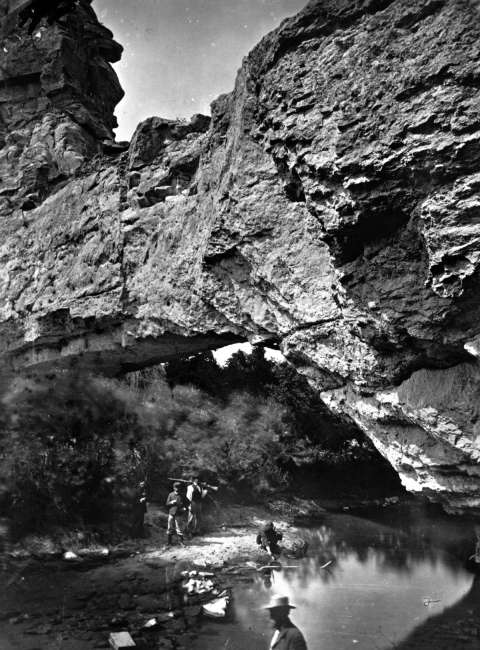 “Rode off in advance of the camp with Sir Wm [William Drummond Stewart], to visit a remarkable mountain gorge,” Matthew Field wrote July 13, 1843. Field, a reporter for the New Orleans Picayune, was traveling with the sporting expedition of the British army officer, adventurer and art patron Sir William Drummond Stewart on Stewart’s final trip to the Rocky Mountains.

In the gorge was “ a ‘natural bridge’ [italics and quotation marks in original] of solid rock, over a rapid torrent,” he wrote. The arch was “regular as tho’ shaped by art—30 feet from base to ceiling, and 50 to the top of the bridge—wild cliffs, 300 feet perpendicular beetled above us, and the noisy current swept along among huge fragments of rock at our feet. We had a dangerous descent, and forced our way through an almost impervious thicket, being compelled to take the bed of the stream in gaining a position below. We called the water ‘Bridge Creek.’”

Four years later, William Clayton was traveling with Brigham Young and the first party of Mormons to make the overland trek to the Salt Lake Valley. Clayton, official diarist for the group, recorded details of the journey that sometimes were reported to him from places he had not, himself, actually seen.

“The creek on which we are camped last night is named A La Pierre [La Prele] and about a mile from where the road crosses, it runs through a tunnel from ten to twenty rods under the high rocky bluffs,” he wrote June 10. “The tunnel is high enough for a man to stand upright in it, and when standing at the entrance one can see the light through on the other side. It seems as if this tunnel had been formed by some strange feat of nature. Several of the brethren went to see it.” Clayton himself clearly did not go to see it, as no one who has seen the arch would describe it as a tunnel.

California-bound Cephas Arms noted what he saw on July 4, 1849, and hinted at what he felt. “The bridge is just at the foot of the mountain through which the stream passes. The mountain is three or four hundred feet above the plain below, and the river rushes through a gorge in the mountain with perpendicular walls to the top of the hill, the whole forming one of the wildest scenes I ever beheld.”

In 1850, Isaac Starr took in the scene from horseback. “One & a half miles from here we crossed A La Prele River, one rod wide, 18 inches deep, water pure. Wood plenty, grass tolerably good 2 miles above the crossing. Up near the high bluff there is a cannon [canyon] or arch of solid stone over this river, 40 or 50 feet high. I passed up the river, rode through beneath the arch, and viewed with delight the grand works of Nature.”

In 1910, rancher Alvah Ayres won a patent on the land and in 1919, his son donated the land to Converse County. It remains a county park today. 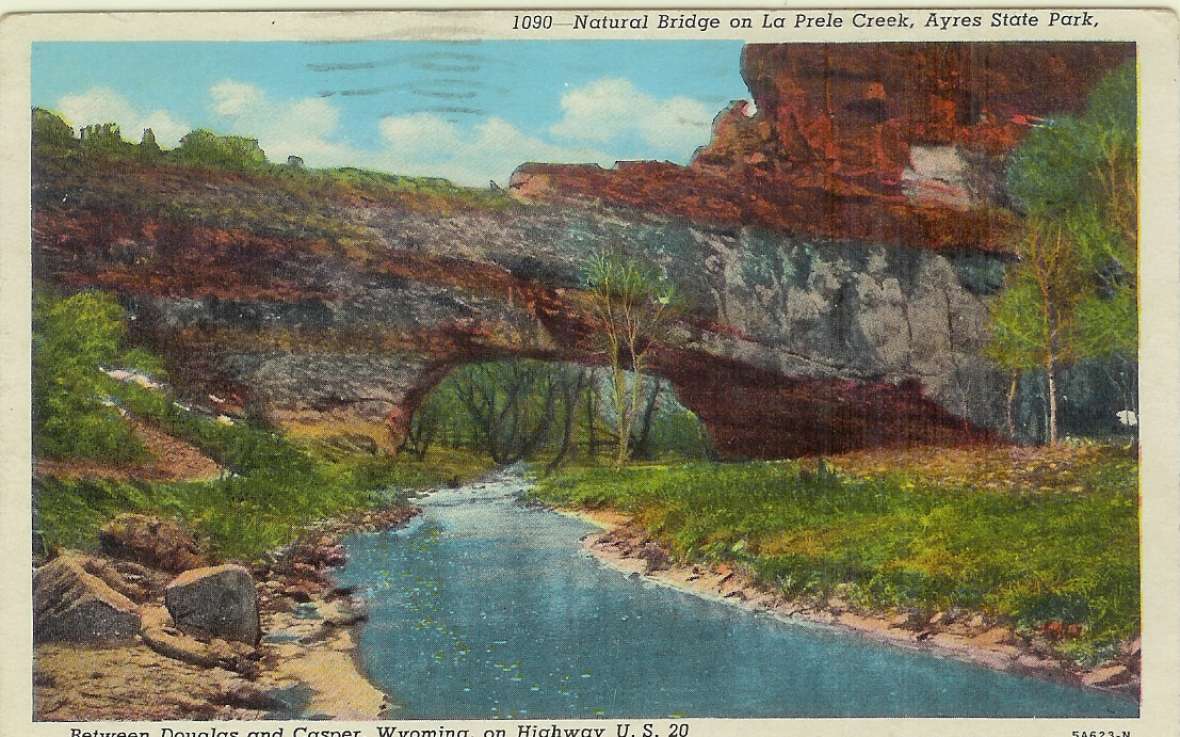 California-bound Cephas Arms called Ayres Natural Bridge “one of the wildest scenes I ever beheld.”

Wyoming Pioneer Memorial Museum, open all year on the state fair grounds in Douglas includes Indian, pioneer and military artifacts and one of Wyoming's first schoolhouses. For more information visit https://wyoparks.wyo.gov/index.php/places-to-go/wyoming-pioneer-museum or call (307) 358-9288.