Fifteen miles after their first glimpse of the Sweetwater country from the top of Prospect Hill, Oregon Trail emigrants began passing a series of playa, or soda lakes—shallow lakes often dried up and sometimes not. The rims of the lakes, or the lake floors themselves, if dry, were encrusted with snow-white alkali.

The travelers called the substance saleratus. It was, and is, a bicarbonate of soda, essentially baking soda. Some of it, light as ash, blew in the wind, irritating the eyes and nostrils of people and their animals. Some of it was crystallized and looked from a distance very much like ice. Many used saleratus to leaven their bread. Though it sometimes turned the dough a faint green, it worked well for baking over high heat—perfect for sagebrush-fueled campfires. 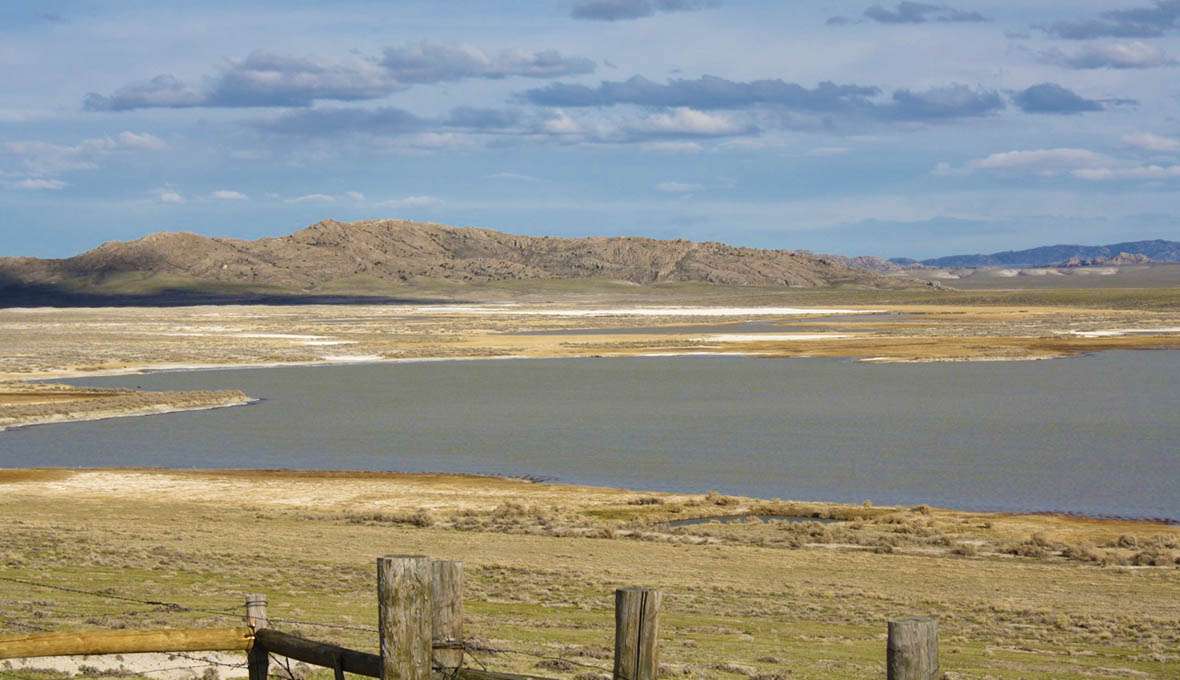 “I visited the Soda Spring while we were halted here a mile & a half below,” wrote Norton Jacob June 21, 1847, traveling with the first Mormon pioneer party. “This Spring or more properly a Pool, is a great natural curiosity. It is some 4 or 5 hundred yards in circumference, clear water without anny outlet & having the taste of Strong Lye, with a tincture of common Salt. as the water is diminished by evaporation, the sand on the shore is covered with a substance white as Snow & that answers every purpose of Saleratus. I found it lying from ½ to 3 inches thick & soon gathered up a Bucket full,” he concluded.

The odor was strong. Depending on the concentration of the sodium salts, the water could be poisonous. Animals who could not be kept from drinking the water might sicken and sometimes died.

“This place looks swampy and smells bad,” wrote William Clayton, principal diarist of the Mormon pioneer party. “The beds of saleratus smell like lime, but the saleratus itself is said to raise bread equal to the best bought in eastern markets. … Large quantities can gathered in a short time and when pulverized it looks clean and nice.”

Saleratus had been available in shops in towns and cities only since about 1840. Many immigrants filled cups, buckets and kegs with it at the playa lakes, delighted to find something of value so abundant and free for the taking. “As we passed along a little farther we saw another large lake to the left and one to the right of the same nature, their banks mostly white with saleratus.” Clayton concluded.” 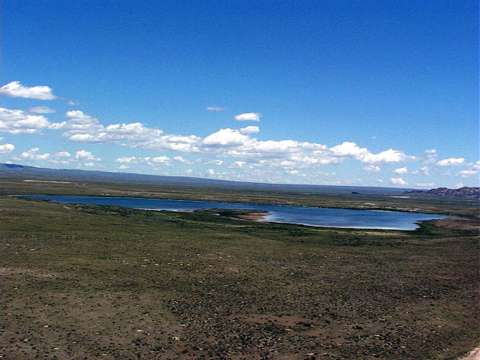 Sometimes the saleratus reminded travelers of ice. “[A]bout 4 we came to several large lakes of pure salaratus,” James Pritchard wrote on June 15, 1849. “I gathered several pounds & used it in bread—one of these lakes looked at a distance of 300 yards like a river disengorging its self of Ice & with its broken flakes upheaved in all manner of shapes. The water had dried away & the pure genuine double refined Salaratus as white as chalk was left on the ground from one to ten inches thick.”

Other travelers were struck by the commercial potential of the soda. “Here are acres by the hundred of this substance,” wrote Dr. Mendall Jewett on May 30, 1850, “one of nature’s grand laboratories for its manufactory, and if ever a railroad communication was established [would] furnish an inexhaustible quantity of this alkaly.”

One traveler, at least, took a lively scientific interest. “The face of the ground is rough from numerous Small Sand hills and ponds, which are dry, and their beds covered with pure bicarbonate of Soda, or Saleratus, from 1 to 6 inches deep, some of which was in a pure crystalline state,” wrote Dr. Carmi Garlick, when he passed the lakes on June 18, 1850.

Investigating closely, he found “[i]n some of these beds were holes from 3 inc. to 3 feet in diameter, down which I thrust my cane some 3 feet without finding bottom. These holes were filled with thick muddy water of an acrid caustic smell.” Then he got more active: “By jumping on the surrounding Crust, the water could be made to Spring up 3 or 4 inches above the Surface. Where these beds or ponds were perfectly dry, I could thrust a cane into them to the whole length. It resembled a bed of dry unleached ashes of a dark colour. This place is 45 miles from the ferry of Platte, in lat 41 ½ N.”

James W. Evans, just a few days later on June 23, 1850, was likewise compelled to satisfy his curiosity. “[W]e passed by a large pond completely sheeted over with crystallized Alkali. It was somewhat transparent and looked like ice. I walked out upon it as I would upon a frozen pond, and finally succeeded in breaking off a piece where some person had cut through it. This incrustation was about six inches thick, and under it was water that felt soft and greasy like soap! Some persons use this alkali in making bread, and found that it answered the same purpose as Soda or Saleratus; in fact it is the same thing as the latter.”

Within a few years, a few enterprising people, at least, seem to have been mining the saleratus, perhaps for resale. “Wagons come here from Salt Lake to collect it for use,” William Woodhams wrote June 1, 1854.

Just a mile and a half beyond the last of the lakes, the granite heap of Independence Rock rises out of the sagebrush plain. Just by it flows the clear, cold, smooth-running Sweetwater River.

“The pools stunk like stagnant soap suds,” Pusey Graves noted July 7, 1850. “Dead cattle marked the place and a sickening stench arose from every quarter inclining the traveler to hurry on, to reach the Sweetwater. Having reached the stream fatigued with trudging through heavy sand beds and very thirsty, I knelt at the edge of this Sweetwater River and for the first time slaked my thirst with pure water since I crossed the Big Blue River.” The Big Blue joins the Platte in eastern Nebraska, around 500 miles to the east of Independence Rock.

In 1862, the U.S. Army fortified and converted a former stage and Pony Express station on the bank of the Sweetwater into a post called Sweetwater Station, a mile or so east of Independence Rock. Young Lt. Caspar Collins made the post his headquarters; from it soldiers protected emigrants and the transcontinental telegraph line that followed the road from the North Platte to South Pass. The post was abandoned in 1866.

Emigrant Mendall Jewett describes alkali-encrusted Saleratus Lake near Independence Rock: “Here are acres by the hundred of this substance, one of nature’s grand laboratories for its manufactory ...”

Steamboat Lake, one of several so-called saleratus lakes where Oregon Trail pioneers often stopped to stock up on saleratus, a kind of natural baking soda, is the subject of an interpretive turnout off Wyoming Highway 220 about four miles west of the highway’s intersection with Natrona County Road 319 and five miles east of Independence Rock. The site, a joint project of the Pathfinder National Wildlife Refuge and the Audubon Society, features information on bird life and other wildlife.

Much closer to Independence Rock is Playa Lake, also called Saleratus Lake, a mile and a half northeast of the Rock. Playa Lake is easily visible from the top of Independence Rock. Like the other saleratus lakes, it is sometimes dry and sometimes not, depending on the season and on that year’s rainfall.

The Bureau of Land Management’s Prospect Hill Interpretive Area lies in a turnout off Natrona County Road 319 about eight miles southwest of Rock Avenue and 1.4 miles southwest of Willow Spring. To find the turnout, drive southwest a mile from the Willow Springs area. In 0.8 mile, about halfway up the hill is a pullout with a good view of the swales cutting the slope. Near the top of the ridge, 1.4 miles from Willow Springs, watch for a BLM directional sign and a gravel road on the right. Turn onto the road, which leads back about one quarter mile to the BLM interpretive site.