On private land next to the Oregon Trail a few miles southwest of present Douglas, Wyo., is a rocky, conical hill that many early travelers noted on their way past.

“Near our camp a perfect cone of fine-grained sandstone had been thrown up sixty or eighty feet high, which almost looked as if it had been formed by the hand of man, so regular and perfect was its shape,” Gold seeker Alonzo Delano wrote in 1849. The hill is around 70 feet high, though many diarists estimated it higher. 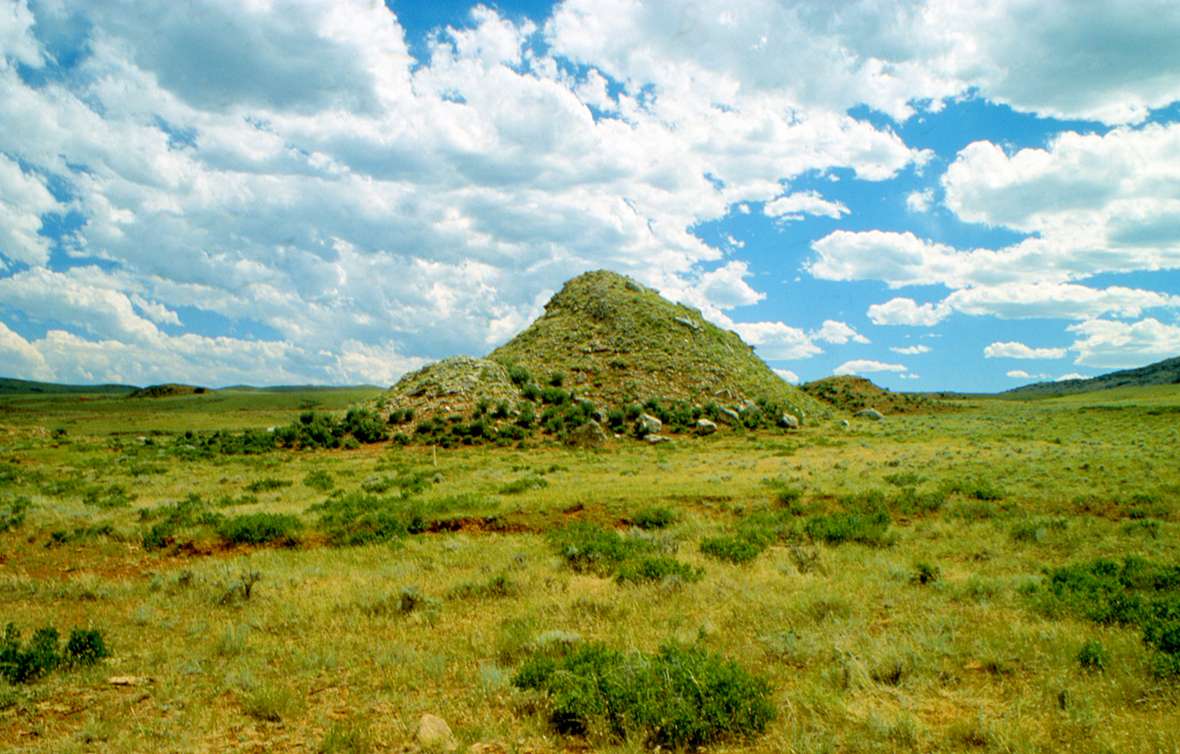 “The stone was of a beautiful kind—some of it much like the Missouri oil stone,” Delano continued, “and our men picked up some fine pocket whetstone, which gave a delicate edge to their knives. We encamped near this singular cone, the soil around being highly colored with ochre, but affording little grass and poor water.”

Since trail times, the cone has come to be called Knob Hill and sometimes Grindstone Butte, a reference to the good whetting characteristics of the stone that Delano refers to above.

However, many diarists compared the hill’s shape to a sugar loaf. Until the advent of granulated and cubed sugar late in the 1800s, sugar nearly always came in hard, steep-sided conical loaves with rounded tops, standing anywhere from five inches to three feet high. The better the sugar, the smaller the loaf.

William Woodhams, for example, noted in May 1854, “In one ravine we passed a pile of rocks in the shape of a sugar loaf 70 or 80 feet [high] looking precisely as though human agency had been employed to raise the pile, but hills of the most extraordinary shape are to be seen at every turn of the road along these black hills.”

The forested slopes of the Laramie Range of what’s now east central Wyoming were often called the Black Hills, before the hills of Dakota later earned that name.

At least one traveler did give this particular hill a name. British world traveler, explorer and author Richard Burton took the stagecoach to Salt Lake City in 1860 to interview Brigham Young. Burton never missed a chance to pass along a good story, especially if he could mention whiskey at the same time.

“After six miles we saw on the left of the path a huge natural pile or barrow of primitive boulders,” he wrote on August 15. The hill, he wrote, was “about 200 feet high and called ‘Brigham’s Peak,’ because according to Jehu’s [the stagecoach driver’s] whiskeyfied story, the prophet, revelator, and seer of the Latter Day Saints [Young] had there, in 1857(!), pronounced a 4th of July oration in the presence of 200 or 300 fair devotees.”

Young had actually crossed the trail twice in 1847, not 1857—a fact Burton’s exclamation point appears to show he was aware of. Westbound, Young and the first Mormon pioneer party of 147 people spent the Fourth of July beside the Green River. Eastbound, he was with a much smaller group and in a hurry to get back to Mormon settlements on the Missouri River before winter set in, and would have had no time for orations, notes Utah historian Will Bagley.

As recently as the late 1970s, at least a few pioneer names could still be seen carved into the rocks at Knob Hill. At one time there may have been many. “Probably a mile farther,” wrote James Yager in June 1862, “as we journeyed we came to a pile of hard sandstone about one hundred feet high, that appeared as if they were piled there as long as one rock would lay upon another tapering from the base to a point at the top, like a sugar loaf. I ascended to the summit of this pile. I found names on some of the rock.”

One isolated boulder at the foot of the hill contains a single pioneer inscription. No names remain on the top.

More about Douglas at Wyoming Places