Late in June 1864, the Oregon-bound Magill family of Brown County, Kan., found that their 3-year-old daughter, Ada, was sick with dysentery when they camped near Fort Laramie. After a short while the child’s health improved, and the family continued along the trail another 100 miles to a spot near present Glenrock, Wyo., in Converse County.

Fortunately for the Magills, they were traveling in advance of the troubles that would lead a few weeks later to the deaths on the trail of Mary Kelly and Martin Ringo. Long-simmering tensions along the trails broke out into sporadic warfare later that summer between emigrants and people of the Lakota Sioux, Cheyenne and Arapaho tribes. 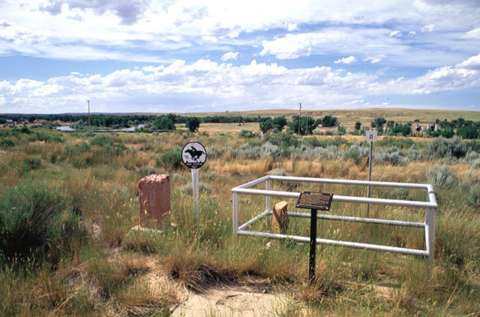 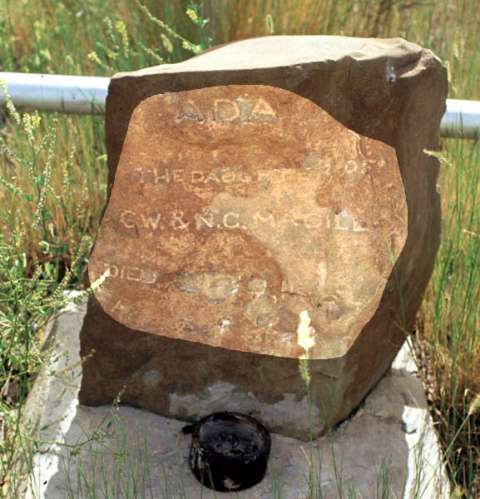 There were eight in the emigrant family—Nancy and Caleb Magill and their six children. Ada was the youngest child; Benjamin, the oldest, was 15. Caleb Magill had served in the Mexican War as a teamster hauling U.S. Army provisions in ox-drawn wagons. Later he worked as a freighter on the Oregon Trail between Missouri and Fort Laramie. Years later, he told of a two-day walk in bitter cold that he and a partner made to find strayed oxen. It was so cold that the men, on the return journey, would lie down at night beside the oxen for the extra warmth they offered.

In early July 1864, the family camped alongside Deer Creek, near present Glenrock. Ada again became sick, but next morning seemed better. The Magills continued on, but had gone only a few miles when she became very ill. They stopped and camped. That night, July 3, she died, as Caleb told the story years later.

From the boards of an abandoned wagon the Magills made a coffin and buried the girl in her “Sunday best calico dress,” as the family remembered it later. “They heaped stones on the grave to keep wolves and coyotes out and went on toward Oregon,” according to historian and retired schoolteacher Randy Brown.

In Oregon they settled in Polk County south of Portland in the Willamette Valley. Brown notes that most of the information on the Magill family came from W.W. Morrison of Cheyenne, a freight conductor on the Union Pacific in the 1940s. Morrison contacted Magill family members still living at that time in Oregon. No contemporary family letters or diaries have survived, so far as is known, and the grave is not mentioned in any other emigrant diaries that have so far turned up.

The Oregon Trail route remained an important transportation corridor long after the end of the covered wagon era. In 1888, a new railroad passed close to Ada’s grave but did not disturb it. In 1912, when engineers surveyed for a better road between Glenrock and Casper, they found that the Magill grave, on a knoll 20 feet north of the old trail and marked with a rough, inscribed headstone, would lie right in the centerline of the new road. Surveyor L.C. Bishop, who later would become Wyoming’s state engineer, or chief water officer, decided to move the grave 30 feet north to the edge of the new road.

Under a large stone slab about five feet down, according to Brown, Bishop and a shovel crew of convicts from the Converse County jail found “pieces of the little girl’s skull, a few small bones, some pearl buttons and a few cut nails.”

Bishop carved a new stone with the same inscription as the original, and buried the original about three feet deep in the new grave.

Later in the decade, oil was discovered in the nearby Big Muddy field, and the town of Parkerton sprang up. Chicago and Northwestern officials built the Parkerton passenger depot next to the grave. The station operated until about 1935. By the 1950s the town was mostly abandoned; the railroad line was abandoned and the tracks were removed in the 1980s.

Ada Magill’s grave survives, protected by a sturdy fence and marked with a plaque placed by the Oregon-California Trails Association.

Three-year-old Ada Magill dies of dysentery on the Oregon Trail and is buried west of present Glenrock, Wyo.