About nine miles west of Emigrant Gap, the Oregon Trail wound through a narrow gap between two ragged ridges of sandstone and shale rocks, upended strata we now would call hogbacks. 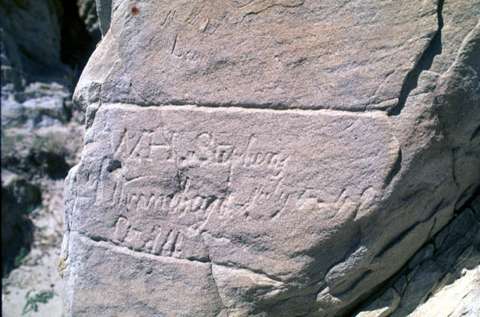 “It is a jagged, broken ridge,” Burton wrote, “of huge sandstone boulders, tilted up edgeways, and running in a line over the crest of a long roll of land … like the vertebrae of some great sea-serpent or other long crawling animal; and, on a nearer view, the several pieces resolve themselves into sphinxes, veiled nuns, Lot's pillars, and other freakish objects.”

More common were the names “Rock Avenue,” “Avenue of Rocks” and “Rock Lane.” The pioneer Mormon companies of 1847, first to make the trek to the Salt Lake Valley, seem to have been the ones who coined “Rock Avenue.”

“[T]here is a steep descent from a bluff and at the foot there is a high ridge of sharp pointed rocks running parallel with the road for near a quarter of a mile, leaving only sufficient space for wagons to pass,” official Mormon diarist William Clayton, traveling with the first of those companies, wrote June 19 of that year. “At the sought [south] point there is a very large rock lying close to where the road makes a bend, making it somewhat difficult to get by without striking it. The road is also very rough with cobble stones.”

The following year Clayton condensed his description when he published it in his guidebook: “Rock avenue and steep descent. The road here passes between high rocks, forming a kind of avenue or gateway, for a quarter of a mile.”

In these stretches, the road was generally good, “though rather too hard and gravelly for the cattle,” wrote another diarist, Israel Lord, in July 1849. The country was dry in all directions, and what little water the travelers found was potentially deadly.

“Passed through a very singular defile, called ‘Rock Avenue,’ wrote J. Goldsborough Bruff July 23, 1849. Bruff, with 25,000 other forty-niners, was headed to the gold fields of California that year of extremely heavy traffic on the trails. “After emerging from the Defile, the road descended a very steep hill (had to double lock the wheels), here a wagon broke the fore-axle, and 4 of the mules exhausted, so they had to camp on a barren waste until morning, without feed or water. At base of these hills was the ‘Alkali Swamp & Spring,’ 2 miles from the Defile, and 7 1/2 from the Mineral Spring.” Bruff here is using the place names from Clayton’s Mormon Guide, as it was generally known, thus his use of quotation marks. Its more formal title was The Latter-Day Saints' Emigrants' Guide.

“The water here—strong alkali was the color of coffee,” Bruff continued. “And piled around were hundreds of dead animals, chiefly oxen.”

A month earlier diarist Jonas Hittle had noted, “It is very warm. We moved on and passed several oxen given out. We passed through Rock Lane which is two lines of Rocks rising perpendicular out of the ground … They are about 40 yards apart. At the far end of this I cut my name dated June The 24th 1849.”

The Hittle inscription no longer exists, though his was one of a great many that once existed along this stretch of trail. Unfortunately, many were lost when portions of the rock formation were blasted away in the 1960s to upgrade the county road. The entire left-hand section of the ridge, or wall, was obliterated. Several miles of pristine trail ruts were destroyed by pipeline construction around the same time.

Trails historian Aubrey Haines called the destruction “calculated vandalism,” in a report he wrote for the National Park Service in 1972. More recently, road graders knocked off the end of the right-hand bluff near the road, taking most of the remaining inscriptions with it.

Nonetheless, sections of the county road, following closely the route of the older trail, still offer a glimpse into the past uncluttered by modern visual intrusions. 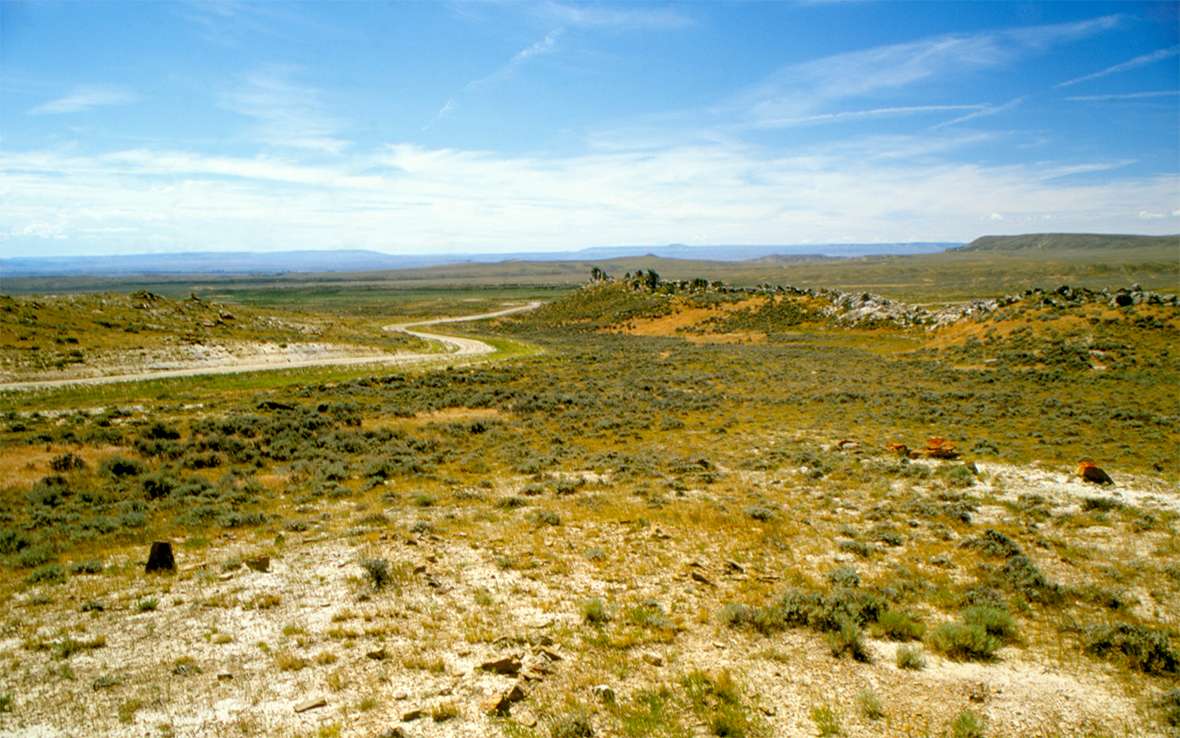