A short way west of Willow Spring, Oregon Trail travelers heading for Utah, Oregon or California came to a steep hill, where the road rose 400 feet in elevation in the space of a mile. “[A] pretty hard drag,” California-bound W.S. McBride called it in 1850. He was right; many emigrants had to double-team their oxen to make the grade. But at the top, he and all other travelers then and now were rewarded with a sweeping view of new country. Diarists remarked often on the sight, and on how it lifted their spirits. 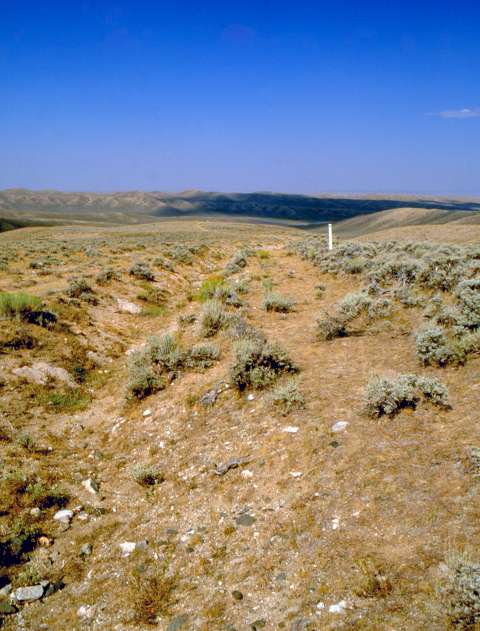 “From the top can be seen a vast extent of country to the south, west, and north. For about twenty or thirty miles to the south there appears to be a tolerably level bottom over which our future road runs. Beyond this there are vast ranges of high hills whose summits are spotted with snow,” wrote William Clayton, diarist for the first Mormon pioneer company, on June 20, 1847. The location was attractive enough that its commercial possibilities occurred to him as well: “The view from this hill is one of romantic beauty which cannot easily be surpassed and as [Mormon Church] President [Brigham] Young remarked, would be a splendid place for a summer mansion to keep tavern.”

From the top of the hill, emigrants looking from east to west along the southern horizon saw the Pedro, Shirley, Seminoe and Ferris mountains, as they are now named, and the Sweetwater Rocks to the southwest.

“Before us is stretched out the long ranges …” diarist John F. Snyder wrote on June 7, 1850. “Gazing on this scene,” he continued, “I was forcibly reminded of [poet Thomas] Campbell’s

‘As yon summits, soft and fair,
Clad in colors of the air;
But to those who journey near
Barren, brown and rough appear.’

… Descending ‘Prospect Hill’ by another long, inclined route,” he concluded, “we slowly continued our march through heavy sand.”

Poetry, shouts and song—year after year, reactions were similar. “As we reached the summit of Prospect Hill, the whole Sweetwater country broke upon our view, with mountains north and south, evergreen timber and snowbanks on their sides, land sage plains between,” wrote Elizur Shaw on July 20, 1862. “We could scarcely repress a shout at our first view of the mountains. The road was good and we camped at three o’clock on Greasewood Creek, at a deserted stage station.”

Prospect Hill is also known as Ryan Hill. Today, the U.S. Bureau of Land Management provides a hilltop viewing area with interpretive exhibits. Visitors can take in the landscape, virtually unchanged since covered wagon days, and walk wagon ruts and swales on public land. Swales have also been marked by white, 4-foot carsonite markers placed by the Oregon-California Trails Association.

Oregon Trail diarist Elizur Shaw, reaching the top of Prospect Hill, notes, “We could scarcely repress a shout at our first view of the mountains..”

The Bureau of Land Management’s Prospect Hill Interpretive Area lies in a turnout off Natrona County Road 319 about eight miles southwest of Rock Avenue and 1.4 miles southwest of Willow Spring. To find the turnout, drive southwest a mile from the Willow Springs area. In 0.8 mile, about halfway up the hill is a pullout with a good view of the swales cutting the slope. Near the top of the ridge, 1.4 miles from Willow Springs, watch for a BLM directional sign and a gravel road on the right. Turn onto the road, which leads back about one quarter mile to the BLM interpretive site.

Steamboat Lake, one of several so-called saleratus lakes where Oregon Trail pioneers often stopped to stock up on saleratus, a kind of natural baking soda, is the subject of an interpretive turnout off Wyoming Highway 220 about four miles west of the highway’s intersection with Natrona County Road 319 and five miles east of Independence Rock. The site, a joint project of the Pathfinder National Wildlife Refuge and the Audubon Society, features information on bird life and other wildlife.

Much closer to Independence Rock is Playa Lake, also called Saleratus Lake, a mile and a half northeast of the Rock. Playa Lake is easily visible from the top of Independence Rock. Like the other saleratus lakes, it is sometimes dry and sometimes not, depending on the season and on that year’s rainfall.