West of Rock Avenue on the Oregon Trail in what’s now central Wyoming, emigrants came to an odorous, swampy place where their livestock often got stuck in the mud and risked poisoning if they drank the alkaline water.

William Clayton, diarist for the first Mormon pioneer company in 1847 and author of a guidebook to the trail published a year later, called it Alkali Swamp; other travelers called it Alkali Spring. A more recent historian in Casper, Wyo., the late Lee Underbrink, amused by the disgust Clayton’s journal expressed for the site, dubbed it Clayton’s Slough. 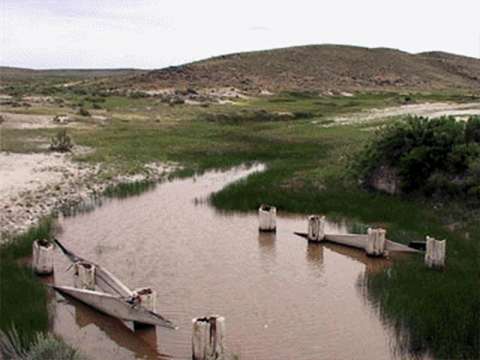 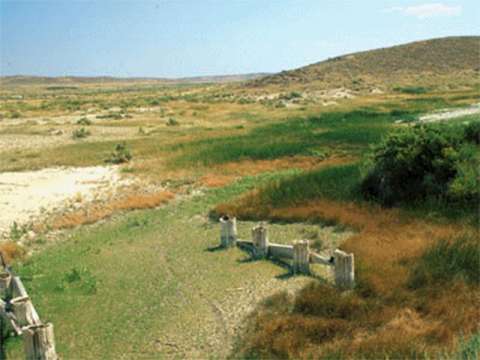 “It is strong of salt or rather saleratus and smells extremely filthy,” Clayton wrote June 19, 1847, of one of the two small streams that join at the place. “Its banks are so perfectly soft that a horse or ox cannot go down to drink without sinking immediately nearly overhead, in thick, filthy mud, and is one of the most horrid, swampy, stinking places I ever saw.”

So miry was the place that men, mules and oxen often got badly stuck.

August 13, 1843, was very hot, diarist Theodore Talbot wrote, and one man, leading a horse and mule and spying the little stream, turned off to give them a drink.

“We had hardly reached it,” wrote Talbot, “when he suddenly found the ground giving way under him, alarmed at so unusual an occurrence which appeared nothing less than a special and pressing invite to the company of his very Satanic Majesty, he retraced his steps pretty nimbly, once more reaching Terra Firma safe and sound.”

Not so the horse, Old John, nor Jane the big-headed mule, Talbot wrote. “On looking round he could see but the nose of the one, and the head of the other floating round in a sort of white, semi-fluid lake.” The man called for help, other men brought ropes and after much pulling and hauling, with some of the men partly sinking in as well, “forth came the two animals, looking exceedingly miserable and covered with a white coat, which grew hard very rapidly in the air. This little incident, together with [Thomas] Fitzpatrick’s heartfelt regrets that the trio, mule, horse and man, alike worthless, hadn’t gone to _____ in a family party, afforded much amusement to the rest of the men, at Sam Neal’s expense.”

On current maps the little creek of alkali water coming from the northwest is named Poison Spring Creek. Ironically, this is the creek that Clayton says was of “not very bad water,” while the much smaller stream, now unnamed, coming from the southwest, was much more alkali, so much so that according to Clayton, “the cattle wouldn’t drink it.”

Any parties unlucky enough to camp at the spot had to post guard at night to keep the animals away from the muck.

“The grass was tolerable but we had to keep a guard with the mules all the time to keep them from swamping in the spouty places,” James Pritchard wrote on June 13, 1849. “A man would sink to his neck instantly. Several of the men fell in during the night. I saw 5 head of Oxen sunk down to their hornes, and their owners had to extricate them by attaching ropes to their heads & pulling them out.

Some men and livestock did drink the water, as they had just come more than 20 miles from the last good water at the North Platte, and were very thirsty.

During the peak years of the California gold rush, 1849-1852, the water seems to have become entirely unfit for use. Emigrant accounts testify to the dozens of dead and dying animals around the slough and all along the road the next four miles to good water at Willow Spring—and beyond.

“All along the road lay ox after oxen dead,” wrote Patrick McLeod June 26, 1849. “Within a few miles of the spring lay dead 4 yoke of oxen killed by lightning. They lay as they stood in the yokes– two by two– twas a sorrowful sight.”

Eleven days later, emigrant Charles Darwin—no known relation to the famous naturalist—reported he “saw in one place where a whole team of eight had fallen in the yoke & died in their tracks,” apparently the same ones McLeod had seen earlier. But they were by no means the only ones. “Dead oxen marked all the road & no mile but offended the nostril with its effluvia. At one of those springs being very thirsty I was strongly tempted to drink but [it] seemed prudent to enquire of some wagon camped there who told me it was poison,” Darwin wrote.

The swamp itself is apparently much diminished since trail days. It is now partially filled in by road construction, and it’s likely that the two streams converging to form the swamp run far less water than they did during the trail era. An earlier road crossed directly over the slough where a few bridge pilings are still visible now.

William Clayton, diarist for the first Mormon pioneer company, described Alkali Swamp (now called Clayton’s Slough) as “one of the most horrid, swampy, stinking places I ever saw.”

Oregon Trail diarist Patrick McLeod noted in passing Clayton’s Slough: “All along the road lay ox after oxen dead. Within a few miles of the spring lay dead 4 yoke of oxen killed by lightning. They lay as they stood in the yokes– two by two– twas a sorrowful sight.”