An Artist and the Fur Trade: the Wyoming Paintings of Alfred Jacob Miller

An Artist and the Fur Trade: the Wyoming Paintings of Alfred Jacob Miller

In April 1837, a distinguished gentleman entered the newly opened studio of a young artist at 26 Chartres Street in New Orleans. He lingered over a large painting of the city of Baltimore—the artist’s hometown—and offered a scant compliment before leaving. A few days later, William Drummond Stewart, a wealthy Scot, returned to hire Alfred Jacob Miller as expedition artist for a journey into the Rocky Mountains of the vast American West. 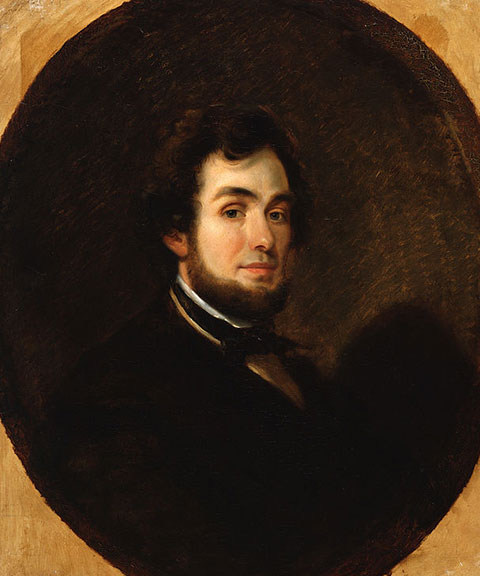 Their destination was the rendezvous of 1837. In a general sense, the French word rendezvous means “meeting.” The rendezvous was a three-week hook-up of fur trappers, Indians, fur company traders and a few opportunistic adventurers such as Stewart. At the confluence of the Green River and Horse Creek, near today’s town of Pinedale, Wyo., Indians and mountain men eagerly traded beaver pelts and buffalo robes for rifles and traps, blankets, trinkets, food and supplies, and spiced-up, watered-down alcohol.

Miller and Stewart traveled as part of a caravan led by Tom Fitzpatrick, mountain man and proprietor of the American Fur Company. Fitzpatrick guided the expedition across the Great Plains generally following the courses of the Kansas, Platte, North Platte and Sweetwater rivers. Fitzpatrick, Stewart and Miller traveled in front, followed by Stewart’s two wagons and the fur company’s 20 single-horse, two-wheeled carts, called charettes. These carried all the supplies the company’s trappers would need for the coming year in the mountains, as well as the whiskey and other trade goods needed for the rendezvous festivities and Indian trade.

The caravan also included hired men—perhaps nine of whom were other Stewart employees, extra horses and a contingent of Delaware Indians whose role included hunting bison for food along the way. The “hump rib” was a particular favorite, Miller noted. He documented all aspects of the hunt, the kill and roasting the meat over the campfire.

The annual rendezvous was a convergence of cultures and a time for horse racing, games, wagers and storytelling. Miller described it as “a grand carouse.” Bundles of 50 to 60 beaver pelts--worth as much as $2,500 per bundle in today’s dollars—were piled into the company’s carts for the return trip east, where they would be fashioned into tall, felted hats for men of high society. 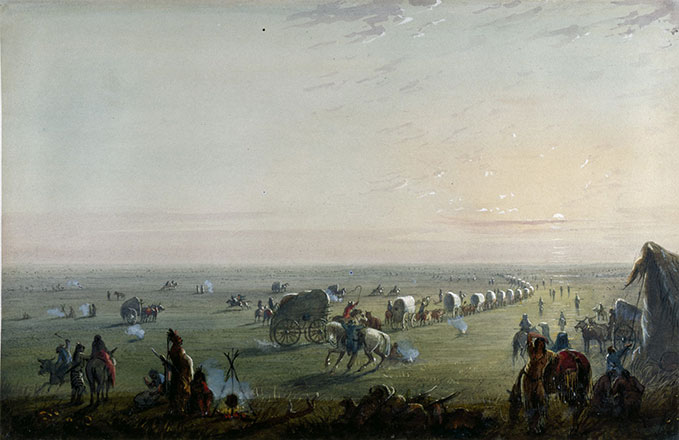 No fashion in New York or London, however, could top the fashion—or the society—of the buckskin- and fur-clad mountain men who hunted and trapped in the Rocky Mountains from the 1820s to the 1840s. At the rendezvous of 1837, the most famous mountain man of all, Jim Bridger, donned a suit of armor, a gift from William Drummond Stewart. “It created a sensation,” Miller reported.

The Snake Indians—the Shoshone—created their own sensation with a spectacle Miller said was staged in honor of their old friend Stewart. The cavalcade was a show of the Snakes’ magnificent dress, highly painted faces and bodies, their fine horses, horse tricks and gunfire. The Shoshone nation was at its height, and every detail of feather, claw, fringe and vermillion-painted skin proclaimed their greatness. As many as 2,000 Indians camped in the broad green valley. Members of the Bannock, Nez Perce, Flathead, Ute, Crow, Arapaho and Delaware tribes were also on hand, but the Shoshone would have been by far the largest group.

After about three weeks, “the grand carouse” began winding down, and the Stewart party and guests headed to the high country. On this excursion Miller documented the prominent features of the Wind River Mountains—sawtooth ridges, classic pointed peaks and valleys with glacial lakes in the foreground. “Under any light,” he noted, “[the mountains] are wondrous and sublime.”

Alfred Jacob Miller had begun painting at a young age and was fortunate that his father was a successful, well-connected business owner. In the early years of America’s nationhood, any artist with promise was encouraged to seek training in Europe. Miller pursued studies at the École des Beaux-Arts in Paris and the English Life School in Rome and also spent long hours in European museums copying masterworks by Dutch Masters such as Rembrandt and Italian greats such as Titian.

This was a time of fascination and wandering, with the young Miller absorbing European tastes and identifying himself with the sweep of Western civilization.

His training in Paris and Rome prepared him well. Miller’s style was warm and engaging, undeniably romantic, and most important, pleasing to Stewart, his Scottish patron. Over the course of the exotic journey to the “Shining Mountains,” as the Rockies were also known, Miller proved to be a keen observer and sensitive recorder of mountain landscapes, wildlife, scenes along the trail, Indian life and dramatic moments at camp. 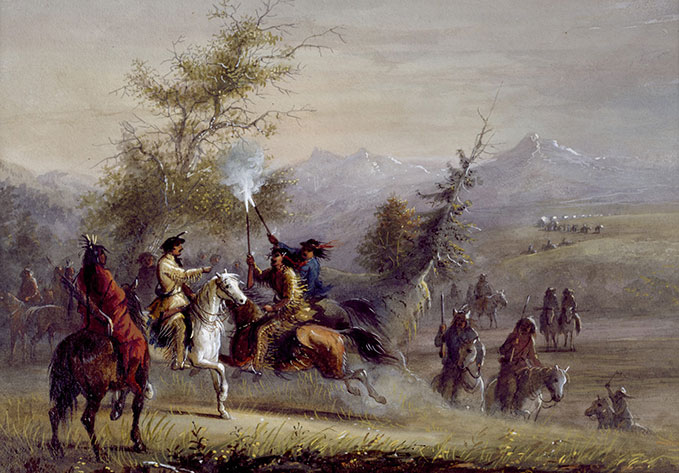 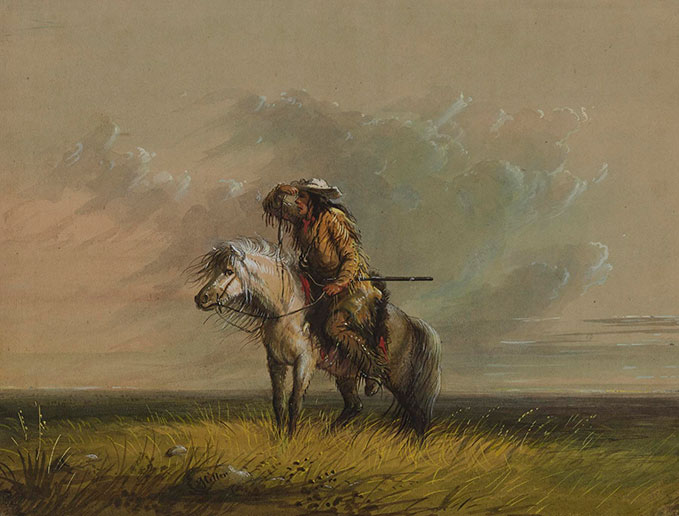 Miller completed more than 200 field sketches in pencil and watercolor. Besides scenes of the trip, Miller illustrated Stewart’s exploits, including some he didn’t witness and even some that undoubtedly never occurred. Capt. Stewart was a veteran of four previous rendezvous and the Napoleonic Wars. He is easily identified in Miller’s pictures by his hooked nose, fringed buckskin coat and magnificent white horse.

Upon Stewart’s return from the 1837 expedition, he learned that his older brother was seriously ill and he would become heir to the family estates. Stewart asked Miller to create a series of full-sized oil paintings for the walls of Murthly Castle, which lies on the edge of the Scottish highlands near the city of Perth.

The campfires of the Rocky Mountains provided Stewart with tales he would tell by the hearth-fires of Scottish manor houses. In an age before photography, Miller’s paintings provided the visual record.

Stewart asked Miller to join him in the mountains the next year when he traveled again to rendezvous, but Miller declined, citing ill health. Perhaps he had had enough of the hard life—struggling to keep up with camp chores, caring for the needs of a horse, and contending with the weather, hardships and dangers along the trail—with no letup of the pressure to produce drawings and water-color sketches with great haste at moments snatched from each day.

Perhaps too he was eager to translate the raw material of his adventure into finished paintings that would not only impress Stewart but also draw the attention of art critics and a wider audience. In fact, his work was lauded at a major exhibition in New York before being shipped to Scotland.

Alfred Jacob Miller never returned to the Wind River country nor witnessed another rendezvous. He completed the bulk of his assignment in 1841 as Stewart’s guest at Murthly.

Fame arrived more faintly than he might have hoped, but for most of his life, Miller made a living painting portraits and reproducing his vignettes and landscapes for a succession of wealthy patrons enthralled by his images of the Far West and trappers’ society. He never married or had children.

The motto of the Stewart lineage of “Sir William” is “Provyde.” The meeting of artist and Scotsman on Chartres Street in New Orleans provided a legacy of American art and history that continues to grow.

Miller’s images are significant for having been created by an artist who experienced rendezvous firsthand. His earliest paintings and sketches are a primary resource for details of dress and gear that only Miller can provide. (Historian Scott Walker points out that certain elements were reconfigured to “enhance” later works.)

Miller drafted his accompanying notes with the satisfaction of one who had emerged from his travails, a touch of bravado marking his tone, and lines of classical poetry punctuating his observations.

These written accounts add further perspective, detail and color to the visual record, as when he describes the habits of “buffaloes drinking and bathing at night,” the threat of prairie fire, the discovery of wild honey, “the great presence of mind, dexterity and courage” of Plains Indian women hunting bison on horseback, and the prospect of trains and tourists transforming the very wilderness he contemplates.

As historian Bernard DeVoto pointed out, the artist Alfred Jacob Miller secured William Drummond Stewart’s association with the Rocky Mountain fur trade. And Stewart, as patron, secured Miller’s reputation as an artist. Today, the rectangular borders of Wyoming frame the loftiest and most vivid settings for Miller’s and Stewart’s experiences in the West.

Upon Stewart’s death, his adopted son sent Murthly’s treasures to auction in Edinburgh, and there began the journey that ultimately brought the “Murthly Millers” to Wyoming and the place that first inspired them. Seventeen paintings are on display at the American Heritage Center in Laramie, Wyo., gifts of Everett D. Graff and his extended family. Also in Wyoming, an extensive collection of Miller’s work is held by the Whitney Gallery of Western Art at the Buffalo Bill Historical Center in Cody, Wyo. Significant collections of Miller’s work are also at the Walters Art Museum in Baltimore and the Amon Carter Museum in Fort Worth, Tex. 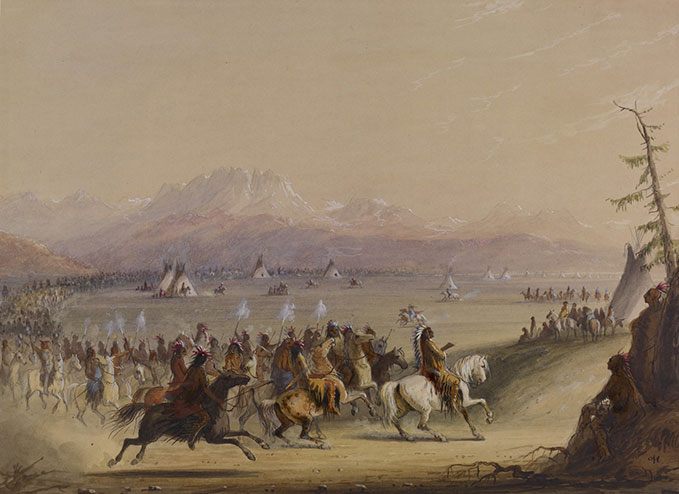 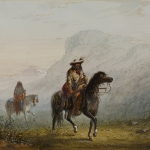 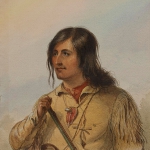 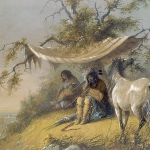 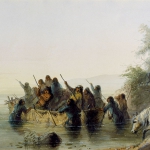 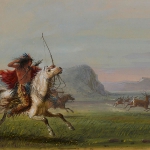 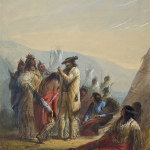 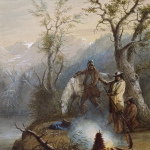 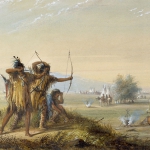 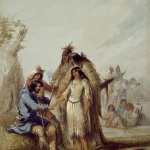 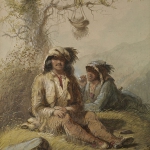 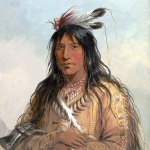 Chavawn Kelley earned her Master’s degree in American Studies at the University of Wyoming, where a telegram from Hemingway sits on the mantel at the Cooper House. She first read “The Snows of Kilimanjaro” while sitting by Fremont Lake near Pinedale. She has published more than 50 poems, essays, and short stories in journals and anthologies and is a writer and editor for the University of Wyoming Extension and the College of Agriculture and Natural Resources. 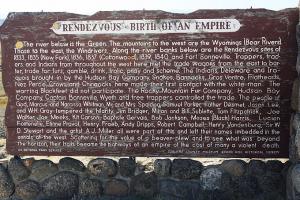