The Grave of Pvt. Ralston Baker

The Grave of Pvt. Ralston Baker

Military records show that Ralston Baker of Philadelphia enlisted in the 51st Pennsylvania Volunteer Infantry on Aug. 4, 1864, and served with that regiment during the last months of the Civil War. The regiment was part of the 9th Corps, Army of the Potomac. He was mustered out with his company on June 1, 1865.

Baker must have liked military life, however, for in October 1865, back in Philadelphia, he enlisted in the regular Army—the famous 2nd Cavalry, formerly the 2nd Dragoons—which was shortly to leave for service on the frontier. Baker’s enlistment papers reveal that he was then 19 years old, stood 5 feet, 6 and one-half inches tall, with gray eyes, light hair, and fair complexion. When asked his occupation, he replied, “Soldier.”

After reaching the frontier, Ralston Baker served with his regiment at and around Fort Laramie for about a year. His messmates called him Bill and nicknamed him “the philosopher” because of his thoughtful and cheerful nature. Late in 1866, Baker’s Company E was ordered to Fort Caspar. 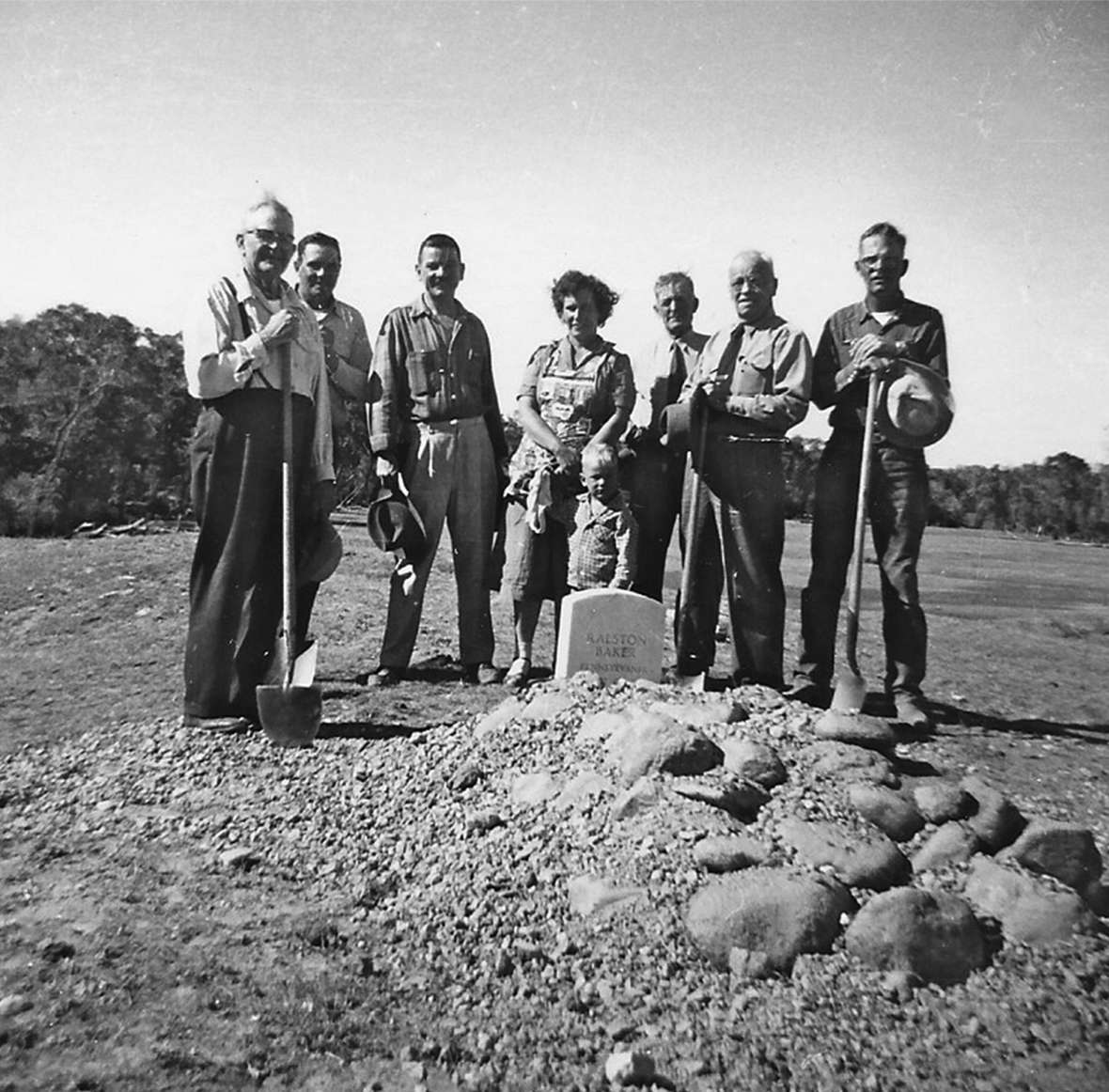 The winter of 1866-1867 was a severe one. Before settling into garrison life, members of Company E had to construct new quarters, which were not completed until mid-November. Despite the harsh weather, the winter was mostly uneventful, but the troops endured many a cold day patrolling the road and inspecting the telegraph line.

One exception to the routine occurred in December when a party of Arapaho managed to run off part of the fort’s mule herd.

A primary duty of the soldiers was to escort the mail between posts—hazardous duty during what came to be known as Red Cloud’s War, when Lakota, Cheyenne and Arapaho warriors were regularly attacking soldiers and freighters on the Bozeman Trail, which led from the Oregon Trail north to the Montana gold fields. On April 30, 1867, Baker was serving escort duty, accompanying the mail wagon to the post at Bridger’s Ferry on the North Platte River about 60 miles east of Fort Caspar.

The detachment consisted of eight members of Company E and six “doughboys,” infantrymen of the 18th Regiment, a company of which was also stationed at Fort Caspar. A six-mule team drew the mail wagon. Besides Baker, all but one of the eight-member cavalry escort can be named. They were Pvts. F.W. Mixer, William Hynes, Sam Jones, William Armitage, and a man whose first name is unknown and whose last name was Luck, all under the command of Cpl. Dolfer. The infantrymen cannot be identified.

According to a later recollection by Hynes, the night before their departure Baker cut his blond hair short saying, “No Injun will ever hang my scalp on his belt or in his tepee! I can see the disappointment of the mad Indian when he bares his knife.”

The standard route to Bridger’s Ferry, near present Orin, Wyo., was via the old Oregon Trail along the south bank of the North Platte River. A spring storm had left six inches of wet snow on the ground, so it must have been a miserable trip on a muddy trail. Despite the conditions, they traveled about 40 miles and camped at La Prele Creek the first night out. During the night, they were plagued by packs of hungry coyotes whose yips and howls made sleep difficult. After a late start the next morning the group had gone about three miles and reached a place where the road was intersected by two ravines, one on each side of the road. Without warning, they were attacked by about one hundred Indians from both sides.

When the first shots rang out, Baker was with the mail wagon conversing with the soldiers riding inside. The rest of the troopers were about two hundred yards in advance. Impulsively, Baker bolted from the wagon intending to join the other cavalrymen, but had not gone far when he received a shot through the neck. He died instantly.

The soldiers scattered in all directions. Some climbed the hills that surrounded the road while firing back at the Indians and injuring several. Armed with antique weapons, the Indians soon gave up the chase and returned to the wagon. They drove it back four hundred yards west to where the trail crosses Sand Creek, unloaded it, cut the mules loose, and set the wagon on fire.

The soldiers did not dare leave their hiding places until dark. When they had gathered together again, they found that Baker had been their only casualty. His badly mutilated body was discovered in the bed of Sand Creek. Still fearful of attack, the soldiers went on to the ferry without burying it.

When they arrived at Bridger’s Ferry, the news was telegraphed back to their company commander at Fort Caspar. In the meantime, Company E had been ordered “down the road—“east to Fort Laramie from where they would be sent to another posting. A few days later the entire company rode east from Fort Caspar to La Prele where they set up camp.

A detachment went ahead to Sand Creek to collect the body of Baker. He was buried near the creek in a coffin made of cracker (hardtack) boxes, “the burial place being a rocky hill not far from the road. Tons of boulders were placed over the grave to prevent the body from being disinterred by wolves or Indians,” wrote Pvt. Mixer in a newspaper account published decades later. Baker’s grave is not far from the site of La Prele Station and is now in an enclosure that also contains the grave of Joel Hembree, a young emigrant who died in 1843.

Pvt. Hynes seems to have been a particular friend of Baker’s. In his narrative, Hynes describes him with affection:

“With his death there perished as noble a heart as was ever inspired by the best of human feeling. His wit, humor and philosophies were natural and spontaneous, they were rarely studied. He was as free from egotism as he was of affectation; he was generous in his toleration of the errors of others, but wicked in a fight. His peculiar outlook on life first attracted my attention. His personality and character gave me a new viewpoint. He was always cheerful and difficult to quarrel with. He was an unusual if not an extraordinary type of that class of persons whom we sometimes meet, that accept life as it comes from day to day, making or fighting for things that should be, but buoyantly accepting the decision even if defeated, yet always ready to renew the struggle.”

Who was Ralston Baker?

Baker’s effects were searched to identify a next of kin, and according to F.W. Mixer, letters revealed that he had enlisted under an alias, his true name being Salter. An uncle was located in Philadelphia who stated that Salter was the only son of a widow living in that city. There is no reason to doubt Mixer’s belief in this story, but there may have been some confusion over what Ralston’s last name actually was.

A family named Baker can be found in the Philadelphia census of 1850 that includes “Ralston Baker, age 2,” son of Benjamin and Sarah Baker, the youngest of six children. In the 1860 census, Sarah appears with four of the children who were with her in 1850, but she is listed as a widow. The two oldest boys, Jacob and Benjamin, Jr., were then working, one as a painter, and the other as a “box maker.” Ralston is also there, age 11, but his name is spelled incorrectly, this time appearing as “Raulston.”

It seems likely that this is Pvt. Ralston Baker who was killed in the Indian attack. As often happened with underage recruits of that era, he added a couple of years to his actual age when he enlisted in 1864. He may have been only 15 or 16, but likely told the recruiting officer he was 18, and when he reenlisted in 1865, he naturally continued with the deception. By then he was 17 years old instead of the 19 that appears on his enlistment document.

The name discrepancy might be explained if Salter was Sarah Baker’s maiden name, and the uncle contacted was her brother, last name Salter, with the resultant confusion. There are several Salters in the Philadelphia city directory who are possible candidates for this uncle. Perhaps significantly, William Hynes, who wrote as if Baker was a good friend of his, did not mention any doubt that Baker was Ralston’s real last name.

The current headstone for Ralston Baker’s grave near La Prele Creek was obtained from the Department of the Army in the early 1950s and placed by Oregon Trail enthusiasts then living in Douglas. Reportedly, the stone replaced a worn, wooden board whose whereabouts is now unknown. The present writer placed an Oregon-California Trails Association marker at the grave in 2001. 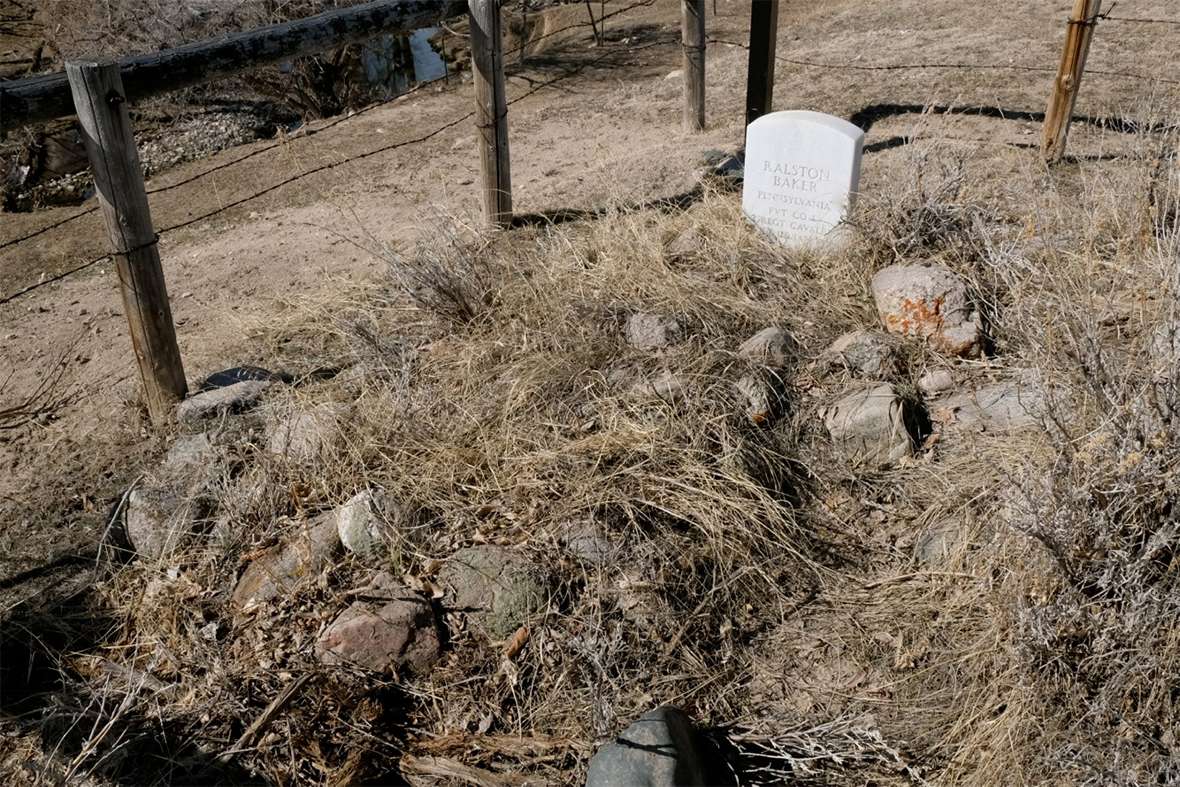 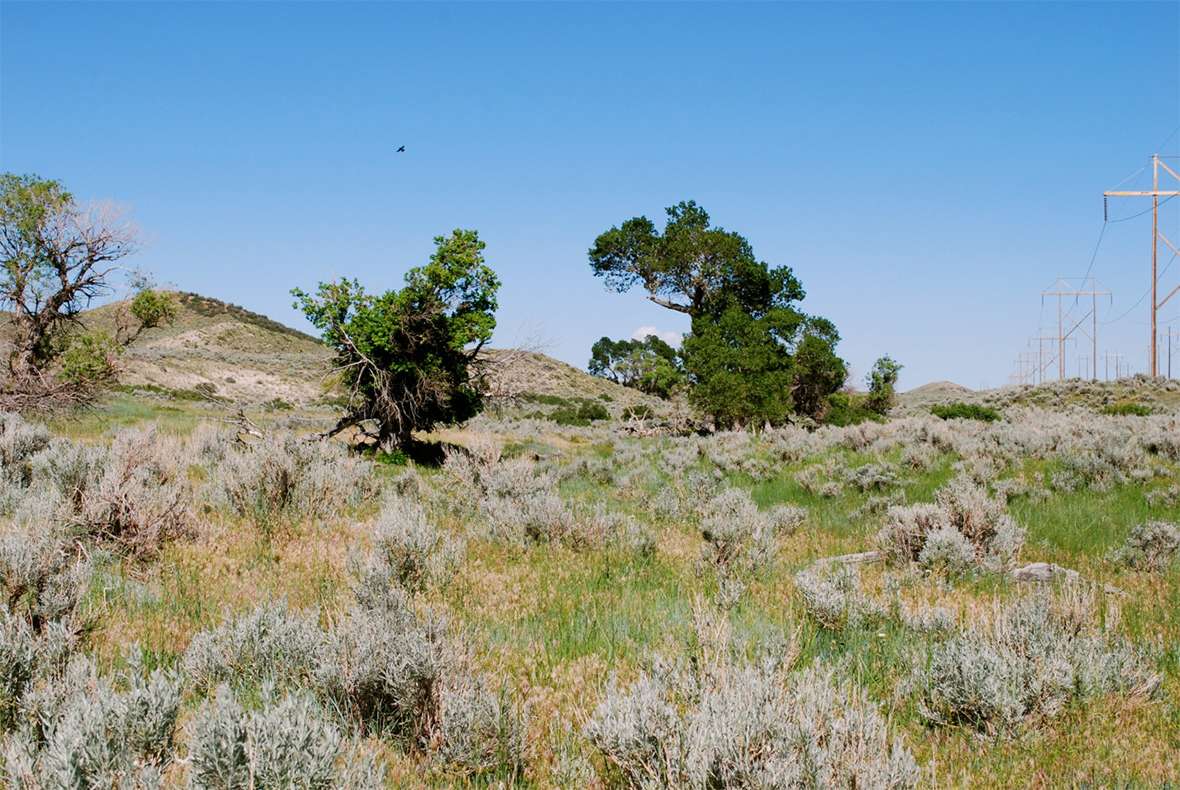 Pvt. Ralston Baker killed near La Prele Creek during an Indian attack on the Oregon Trail.

Wyoming Pioneer Memorial Museum, open all year on the state fair grounds in Douglas includes Indian, pioneer and military artifacts and one of Wyoming's first schoolhouses. For more information visit https://wyoparks.wyo.gov/index.php/places-to-go/wyoming-pioneer-museum or call (307) 358-9288.

To reach Ayres Natural Bridge take Interstate 25 Exit 151 east of Douglas, Wyo., and follow signs. The bridge, reportedly one of only three natural bridges in the nation with water flowing beneath it, lies in a Converse County park about four miles south of the highway.