As travelers on the Oregon Trail made their way west up the Sweetwater River valley, they found the grade even, but the road was often sandy and the winding river required many crossings.

Thirty miles or so before the trail left the valley to climb steeper stretches toward South Pass, emigrants forded the river yet another time, crossed a sandy, five-mile stretch and then came to a place many seem to have heard about in advance, though some doubted its existence. 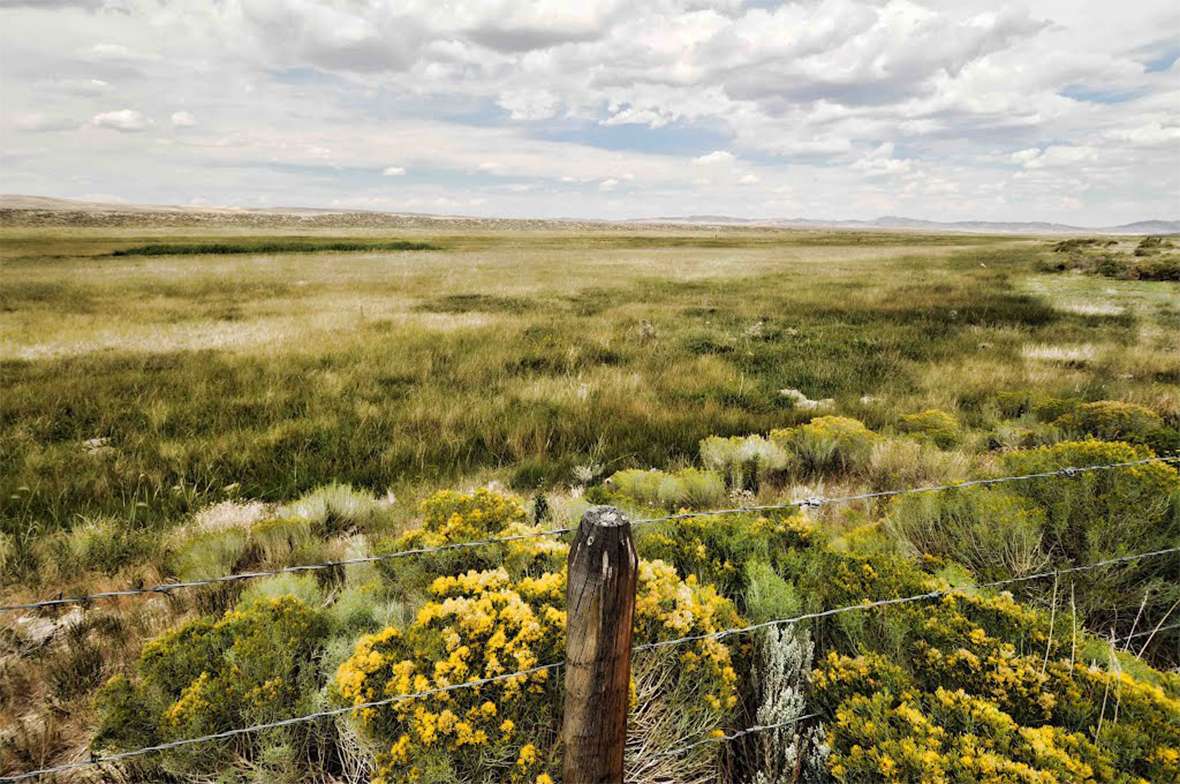 “We were told we would come to ice spring this evening,” California-bound Thomas Eastin wrote July 14, 1849. “[W]e were told that we would find it in a low swampy place and that by digging a little below the surface we would find plenty of ice. The story appeared incredible and we paid no attention to it …”

But when Eastin’s party arrived they found other travelers already camped there—and, in fact, one or two were eating ice. “They took us to the place where they got it and with a spade we dug down about 12 inches beneath the surface and there sure enough found as pure ice as I ever saw about 10 inches thick,“ he wrote.

“We took up a bucket full. The story I fear will hardly be believed but it is nevertheless true.”

The Ice Slough is actually a small, subsurface tributary that drains into the Sweetwater. A variety of marsh grasses and related tufted marsh plants, known as sedges, form a patchwork of surface plant life. Water flowing underneath this peat-like vegetation freezes solid in the winter and remains frozen during the spring and early summer, thanks to the insulating peat.

Longtime trails historian Gregory Franzwa called the slough "one of those absolutely delightful interludes that somehow seemed to crop up just as the incessant slogging west was putting emigrants in the lowest of spirits." 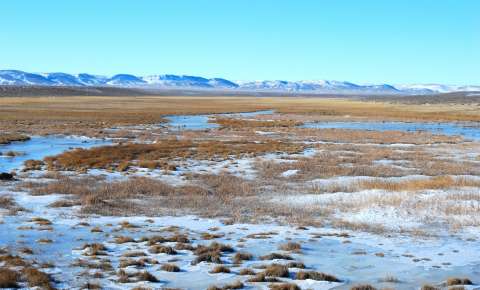 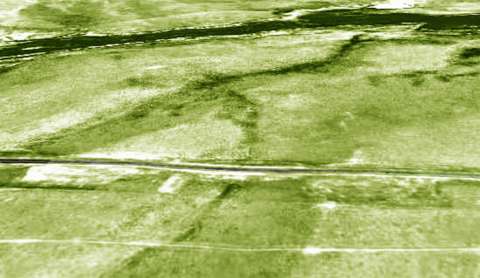 “Here we found a great curiosity,” Mormon pioneer Norton Jacob wrote June 24, 1847. “[It] would seem that Vegetation & Frost had agreed to operate in copartnership, for in digging through a grassy turf to open a Spring we found plenty of Ice!”

Some travelers were prepared for a treat. “[W]e gathered several buckets full [of ice], Dr. William Thomas noted on June 16, 1849, “from which we have had mint julips in abundance.” Others could only remember past pleasures. “[W]ere it not for the absence of Brandy and mint, we might have had a beautiful Julep,” Henry Mann wrote when he passed Ice Slough two weeks later.

Because the place was such a novelty, many, many diarists wrote about it. In spring and early summer, some described a layer of peaty plant life floating on a layer of heavily alkaline water, under which lay the ice—clear, sweet, thick and good tasting.

“The Ice is found from 8 to 10 inches beneath the surface,” James Pritchard wrote on June 16, 1849. “There is from 4 to 6 inches of water above the Ice, and a turf or sod of grass apparently flo[at]ing on the water, upon which you can walk all over it. You can stand and Shake for 2 or 3 rods Square.” Many emigrants noted this shaking ground as they passed; some seemed to have seen similar shaking in bogs elsewhere.

“The water above the Ice is pretty strongly impregnated with Alkali,” Pritchard continued. “To get to the Ice you take a spade or Ax & cut away the sod & then strike down & cut it out in Square blocks. The Ice is clear & pure entirely free from any Alkali or other unpleasant taste. It is from 4 to 10 inches thick, and as good as any I ever cut from the streams in Kentucky,” he concluded.

As the summer weeks passed, emigrants described a layer between the ice and the peaty plant layer that was more and more like mud and less like clear--if alkaline--water. By late summer, many were unable to find any ice at all.

Steady use of the trail over three decades by what eventually totaled hundreds of thousands of people and millions of head of livestock seems to have changed the place as well.

In early July 1862, Oregon-bound Aaron Clough found a company of around 40 soldiers camped near the slough, and most likely near what had been a Pony Express station the year before until that operation was abandoned on completion of the transcontinental telegraph. The troops were probably members of the Ohio cavalry regiment that had arrived in the area a few weeks earlier to protect white travelers from raids by Indian warriors.

The place seemed less charming to Clough than it had to earlier diarists. “The slough at Ice springs is a spouty, swampy place, and is a dangerous place for stock. You can shake the ground for rods around by jumping up and down. If an ox gets stuck in the slough, it is almost impossible to get him out. … The water has a bad taste, a kind of sulphury or stone coal taste, like the water in the wells down on the Platte.”

Two weeks later, Randall Hewitt found the place littered with the carcasses of dead animals, killed, apparently, by the bad water. Buzzards were preying on the carrion. “It was a dirty, sandy, pestilential hole,” he wrote.

And the Army’s horses and mules had eaten nearly all the grass. “This escort had so far succeeded in just about denuding the country of what little feed there was, and was always sure to locate and occupy the best spots,” Hewitt wrote.

He felt tricked; it made him angry. “This delectable spot is named ‘Ice Spring’ by the guide books,” he noted. “It was said ice could be found by digging down about two feet. All traces of ice, if there had ever been any in the summer season, had disappeared before we got there. That ice story was a cold-blooded romance, put in the guide books to deceive.”

Today, the place is accessible only by crossing private land. Little ice is left, according to the National Park Service, since well over a century of trampling by wild horses and season-long grazing by livestock has so damaged the peaty layer that it offers no insulation to protect ice from melting.

At Ice Slough, not far from the Sweetwater River on the Oregon, California and Mormon trails, covered-wagon emigrants were often surprised to find a thick layer of clear ice buried 8 or 10 inches under a layer of boggy turf. A historical marker on the north side of U.S. Highway 287/Wyoming 789, nine miles west of Jeffrey City and 10 miles east of Sweetwater Station, commemorates the spot.

Split Rock is located in Natrona County. The Bureau of Land Management Interpretive Rest Area lies just across the line in Fremont County. Travel west of Muddy Gap Junction on U.S. Highway 287 for about eight miles to the Split Rock Rest Area on the north side of the highway.

The BLM has developed an attractive rest area here, south of Split Rock. A short hiking trail, with interpretive panels regarding the area and its history, leads to an overlook from which trail ruts are visible. Unfortunately, the location of the rest area precludes seeing the distinctive gunsight notch.

Another 3.5 miles west of the rest area is a historical marker turnout for Split Rock. From here, there is a good view of the gunsight notch from the west.