Fifty million years ago, the peaks of the Granite Range rose in today's central Wyoming, and began the long geologic processes of exfoliation. Over time, the vast weight of the mountains caused them to sag into the earth's crust, and about 15 million years ago, wind-blown sand smoothed and rounded their summits. Wind and weather eventually exposed an ancient peak, creating one of America's great landmarks. 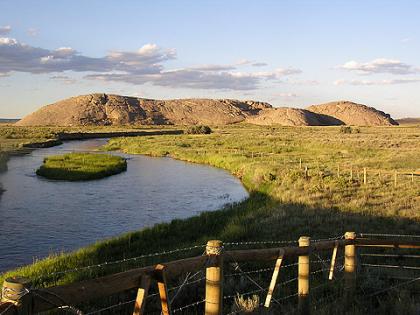 The Sweetwater Valley became the main trail to the heart of the continent when American fur hunters headed west in the 1820s. As the fur trade declined, thousands of pioneers followed the roads that Indians and mountain men had blazed to the West Coast. M. K. Hugh carved the oldest recorded inscription (now weathered away) into the ancient landmark in 1824. Some say legendary mountain man Thomas "Broken Hand" Fitzpatrick named "Rock Independence" that year when he passed by on the Fourth of July. The best evidence indicates that William L. Sublette, on his way to Wind River with 81 men and 10 wagons, christened the rock in 1830, "having kept the 4th of July in due style."

Like a great stone turtle, Independence Rock sprawls over 27 acres next to the meandering Sweetwater River. More than a mile in circumference, the rock is 700 feet wide and 1,900 feet long. Its highest point, 136 feet above the rolling prairie, stands as tall as a twelve-story building.

When the pioneer priest, Pierre-Jean De Smet, saw the rock in 1841, he found "the hieroglyphics of Indian warriors" and "the names of all the travelers who have passed by are there to be read, written in coarse characters." Other sojourners called it the backbone of the universe, but De Smet dubbed the rock "the great register of the desert."

Over three decades, almost half a million Americans passed Independence Rock on their way to new homes on the frontier, and thousands of them added their names to Father De Smet's great register. Located at the approximate mid-point between the Missouri River and the Pacific Coast, Independence Rock became a milestone for travelers on the Oregon Trail. The natural wagon road up the Platte and Sweetwater rivers to South Pass became the Oregon, California, Mormon, and Pony Express roads. Wyoming lay at the heart of each of these ways to the West.

Although much of the trail has disappeared beneath modern cities and highways, hundreds of miles of nearly pristine ruts and swales still mark its course over the plains and mountains of Wyoming. Visitors at Deep Rut Hill at Guernsey, Devil's Gate, South Pass, and the Parting of the Ways can still see a landscape closely resembling the views that greeted the first sojourners. This national treasure is part of the historic legacy belonging to all Americans, and few places evoke that heritage as powerfully as Independence Rock. 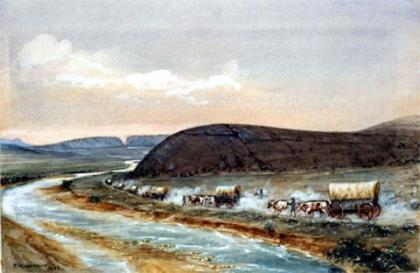 The singular appearance of the formation evoked a host of descriptions. In 1832, John Ball thought the rock looked "like a big bowl turned upside down," and estimated that its size was "about equal to two meeting houses of the old New England Style." Lydia Milner Waters thought that "Independence Rock was like an island of rock on the grassy plain," while Civil War soldier Hervey Johnson reported that it looked "like a big elephant [up] to his sides In the mud."

At a distance, J. Goldsborough Bruff said the rock "looks like a huge whale." Like other goldrushers, Bruff found it "painted & marked in every way, all over, with names, dates, initials." To George Harter, Independence Rock was shaped "much like an apple cut in the middle and one half laid flat side down."

"Thousands of names are engraved, & painted by all colors of paint," wrote Daniel Budd after chiseling his name. "1 can compare it to nothing so [much] as an Irregular loaf of bread raised very light & cracked & creesed in all ways."

"Many ambitious mortals have immortalized themselves in tar & stone & paint," Charles Grey wrote in 1849. Personal glory motivated some inscribers, and topographical engineer Capt. Howard Stansbury concluded that many hoped, "judging from the size of their inscriptions, that they would go down to posterity in all their fair proportions." Amasa Morgan noted that such glory could be fleeting: "Col. Fremont's name is among the highest, but a little boy put his a little higher than the Colonel's."

"After breakfast, myself, with some other young men, had the pleasure of waiting on five or six young ladies to pay a visit to Independence Rock," one young man wrote in July 1843. He painted Mary Zachary's and Jane Mills's names high on a southeast point, but saved the best spot for himself. "Facing the road, in all splendor of gun powder, tar and buffalo greese, may be seen the name of J. W Nesmith, from Maine, with an anchor." 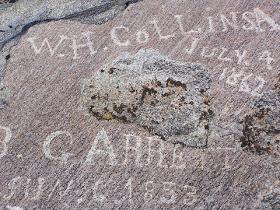 Except in caves and sheltered alcoves, most of the paint and tar signatures have worn away, leaving only names engraved deep in the hard granite.

Pioneers believed that the rock marked the eastern border of the Rocky Mountains. They felt well on their way if they could reach Independence Rock by the Fourth of July. Those who did often celebrated America's birthday.

Martha Hecox camped in the landmark's shadow on July 3, and "concluded to lay by and celebrate the day. The children had no fireworks, but we all joined in singing patriotic songs and shared in a picnic lunch." Polly Coon found a multitude gathered around Rock Independence on July 6, 1852. "Some one had put up a banner the 4th & it still fluttered in the breeze a happy heart cheering symbol of 'American Freedom' to the many weary toiling emigrants."

Independence Rock still overlooks the road to the West, an enduring symbol of Wyoming's contribution to our nation's colorful heritage and highest ideals.

This essay was commissioned in 2002 by the Wyoming State Historical Preservation Office to accompany its annual Archaeology Awareness Month poster. Used here with thanks. 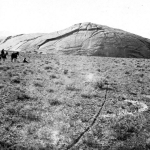 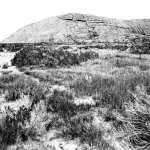 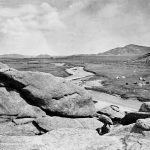 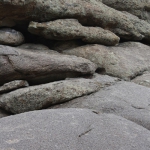 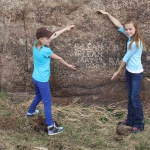 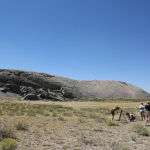 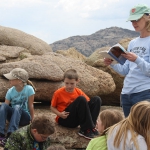 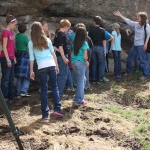 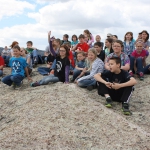