The town of Bessemer was founded in 1888 by the Wyoming Improvement Company at the location now called Bessemer Bend, a loop of the North Platte River approximately 12 miles southwest of Casper, Wyo., and named for Englishman Sir Henry Bessemer, inventor of the Bessemer steel-manufacturing process. The red hills south of the townsite are the landmark Red Buttes of the Oregon-California-Mormon-Pony Express trail. The town’s name supposedly came from early settlers’ correct assumption that the red shale and sandstone of the hills implied an iron oxide content. 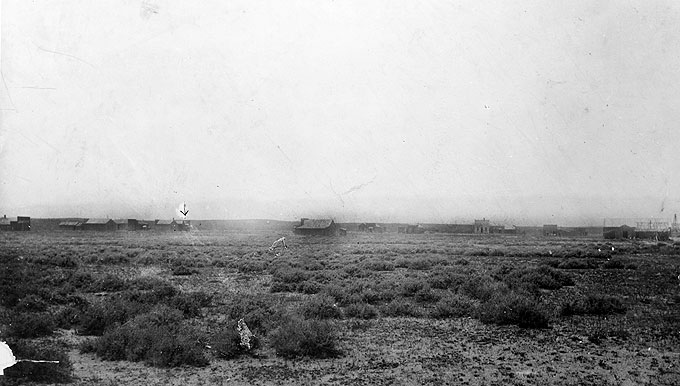 Two of Bessemer’s attractions for settlers may have been the fertile land by the river and the large spring, Speas Spring, at the foot of nearby Bessemer Mountain. The town was on the west side of the river about half a mile west of the west end of the bridge that crosses there today.

In addition, the Wyoming Improvement Company, a group of investors based in Geneva, Nebraska boasted in advertising circulars that the location "borders upon the richest and most extensive oil fields now known to the world…immense deposits of coal…mountains of the finest iron ore" and was destined to be a "great railroad, manufacturing, and industrial centre." Land was reserved for "the future Capitol of Wyoming." Business blossomed. A saloon, three stores, a hotel and livery stable, the weekly Bessemer Journal and other establishments rapidly appeared.

On April 8, 1890, Bessemer and Casper were rival candidates in an election for the seat of brand new Natrona County. Bessemer received 667 votes in the election. Casper received 296. Sources disagree widely on the population of Bessemer at that time. A.J. Mokler’s History of Natrona County, published in 1923, places it at around 220 while James Donahue of the encyclopedic Wyoming Blue Book estimates only two dozen. In any case, the reported Bessemer vote probably exceeded the number of people in Natrona County at the time.

Casper’s newspaper, the Wyoming Derrick, charged that "fraud is so glaringly evident that, should the matter be taken into court, no judge on earth could conscientiously say that Bessemer was entitled to the county seat." Though Casper voters may not have been irreproachable either, the Bessemer returns were discarded, and county seat status was awarded to Casper.

This deprived Bessemer of any prospect for a place on the railroad line, which then terminated at Casper. When nearby oil exploration produced nothing, Bessemer businesses began to move to Casper. The Bessemer Journal suspended publication in December 1890, and soon even the buildings were torn down and moved.

Today, Bessemer Bend is home to small landowners, parts of larger ranches and the Speas Fish Hatchery maintained by the Wyoming Game and Fish Department. Only one copy remains of the Bessemer Journal. The issue of Aug. 1, 1889, is held by the Wyoming State Archives.

The former site of Bessemer is located approximately 12 miles southwest of Casper. From Highway 220, turn west onto Natrona County Road 311 and head west toward the North Platte River. The town site was about half a mile west of the west end of the bridge. No original buildings remain, and most of the land is privately owned. An interpretive site at the Speck-Bessemer Float Access Area features a short trail and signs about the general history of the area.