A day’s travel west of Independence Rock, emigrants on the Oregon/California/Mormon trail—all one road at that point—encountered another major trail landmark: Devil’s Gate. Here, the Sweetwater River has carved a narrow cleft in the granite Sweetwater Rocks that is about 370 feet deep and 1,500 feet long. The cleft is 30 feet wide at the base but nearly 300 feet wide at its top.

Millions of years ago, sediments from eroding mountains and ash from volcanoes filled the basins between the mountains. Rivers cut indiscriminately though softer sediment and harder rock. One such cut, once the sediment again eroded away, has left Devil’s Gate. 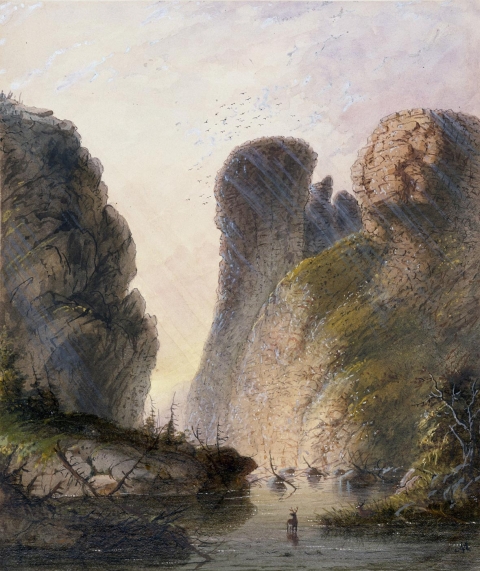 Although the cleft was too narrow for wagons to pass through alongside the river, emigrants frequently stopped to hike around these rocks and carve their names. Often they noticed bighorn sheep climbing the hills. “The chasm is one of the wonders of the world,” emigrant Charles E. Boyle wrote in 1849. “The water rushes roaring and raving into the gorge, and the noise it makes as it comes in contact with the huge fragments of rock lying in its course is almost deafening.”

It is thought that as many as 20 emigrants are buried near here, though only the nearby 1847 grave of Frederick Fulkerson is positively known. The occurrence of several murders in this region led some emigrants to believe this truly was a bedeviled site.

One so-called legend about the origin of Devil's Gate was relayed by New Orleans newspaperman Matthew Field, who traveled up the Sweetwater in 1843. Field attributes the tale to a mixed-blood Delaware hunter, traveling with his party.  The story tells of an evil beast with enormous tusks that once roamed the valley, preventing the Indians from hunting and camping. Eventually, the Indians became disgusted and decided to kill the beast. From the passes and ravines, the warriors shot the beast with a multitude of arrows. The beast, enraged, tore the cleft in the mountains with his large tusks and escaped.

By the early 1850s, trading families were running a post at Devil’s Gate and another at nearby Independence Rock. Mostly these were French-speaking men with Shoshone wives and families. Best known among them was Charles Lajeunesse, also called Simono, Seminoe or Cimoneau; the nearby Seminoe Mountains and Seminoe Reservoir are named for him. Other traders were surnamed Archambault, Perat, Papin and Mosseau. They would have traded hardware and supplies for cash or worn-out animals with the emigrants, and tools, guns and other manufactured items for buffalo robes with the tribes.

At its greatest extent, the trading post at Devil’s Gate included as many as 14 different hewn-log buildings built on three sides of a square. The structures had good floors, windows and board-and-dirt roofs. The post lay about half a mile south of where the river enters the canyon of the gate, where there was good grass for livestock and protection from the wind. Business was good—tens of thousands of emigrants were traveling the trail each year—and briefly the trading families prospered.

The Archambaults were last to run the post. They left in the summer of 1856. That fall, when two late-starting, desperate companies of Mormon handcart emigrants arrived during a terrible snowstorm, they found the post abandoned. The later company, led by Edward Martin, stopped at the post and burned part of it for warmth. Some took shelter for about a week at a cove in the rocks a mile or so upstream. Much later the cove became known as Martin’s Cove.

By 1872, a French Canadian who had anglicized his name to Tom Sun had established a hunting camp at Devil’s Gate, and by the early 1880s he and his family and cowboys were running thousands of head of cattle. The Sun family expanded the ranch steadily for more than 100 years. In the 1990s, they sold the historic core of the operation to The Church of Jesus Christ of Latter-day Saints—the Mormons—who established a visitor center to tell the story of the stricken handcarters of 1856. The visitor center includes a reconstruction of Fort Seminoe, the 1850s trading post. 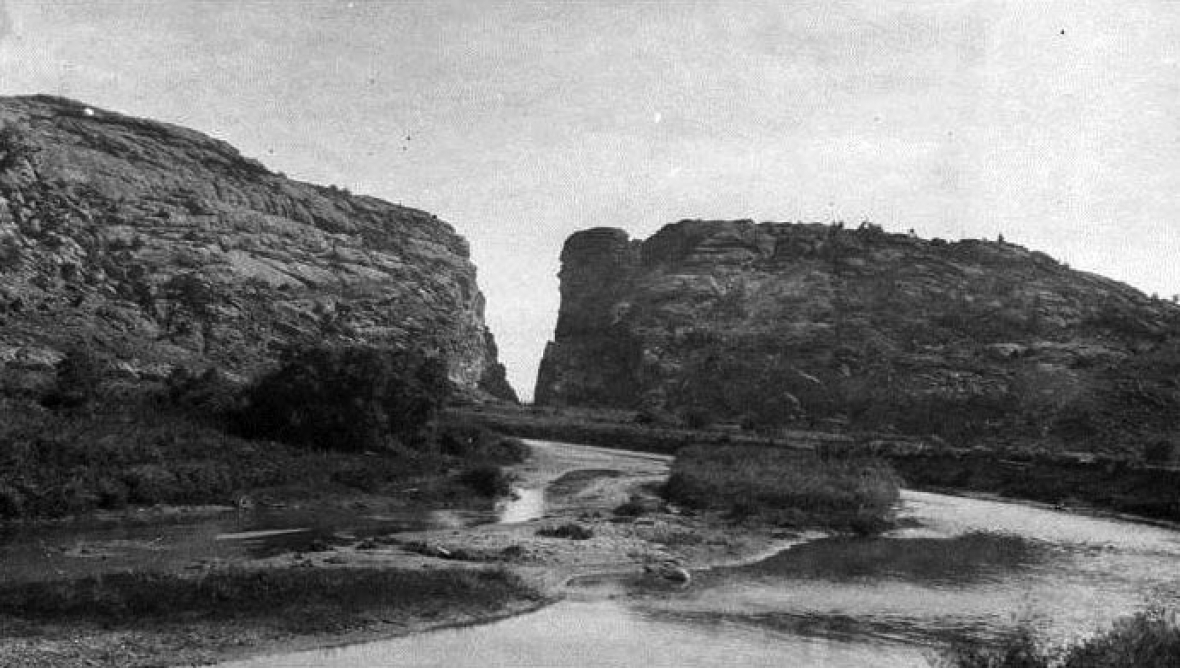