Moving west from Pacific Springs, Oregon Trail emigrants came in succession to three branches of the Sandy—Dry, Little and Big. At Parting of the Ways, they had chosen between the Sublette Cutoff, heading west, and the Fort Bridger road, heading southwest toward Fort Bridger.

Both routes took them across the Little Sandy and, finally, Big Sandy. 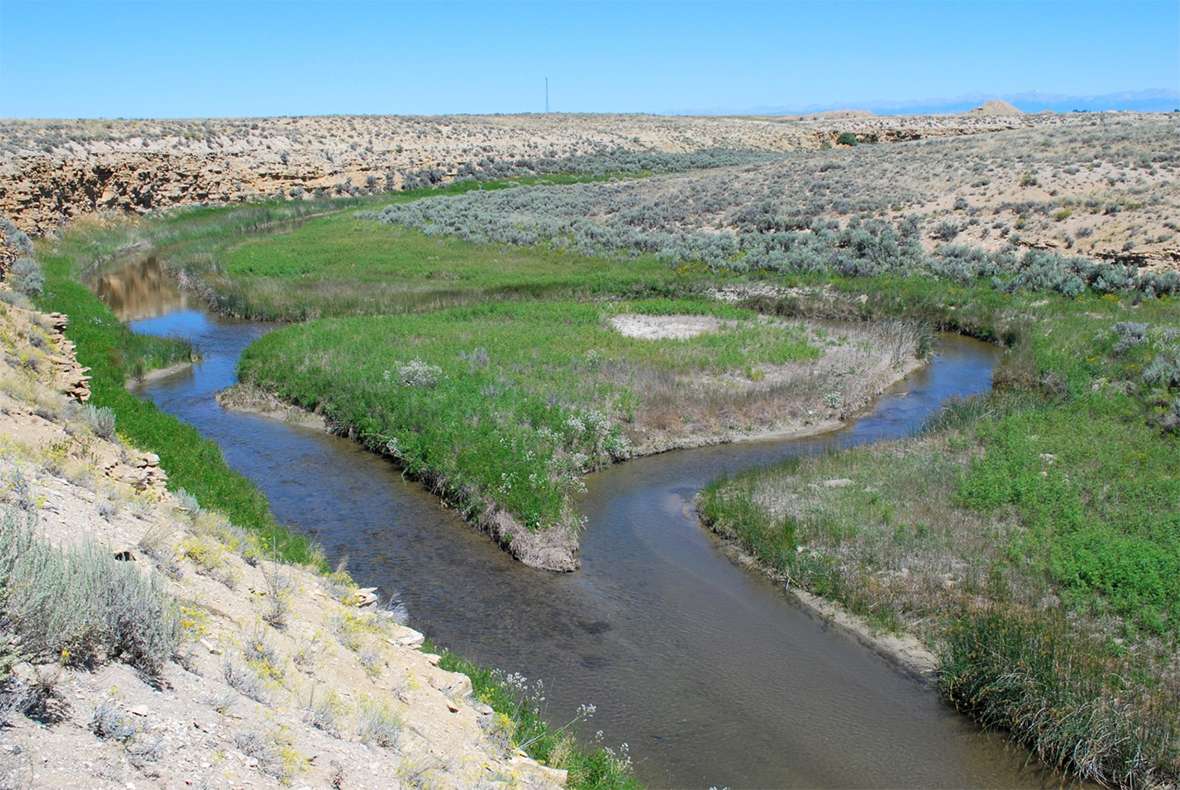 After crossing Big Sandy, Sublette Cutoff travelers faced the Colorado Desert, 40 miles with neither water nor grass. Travelers bound for Fort Bridger and Salt Lake had an easier time. They stayed close to Big Sandy after crossing it, because that trail more or less followed the creek. Still, the way was long and difficult.

“This is a flat running stream over a sand bottom,” wrote former mountain man James Clyman on June 15, 1846. “[W]e found its Bank full from the thawing of the snow on the wind river mountains in which it rises.”

The next year, after crossing Big Sandy on the Fort Bridger route, Orson Pratt with the first party of Mormon pioneers wrote on June 29, 1847, “We travelled 17 miles this afternoon without grass or water, although in about 12 miles water might have been obtained from the Big Sandy, which runs about half a mile to the left of our road.”

Isaac Wistar, whose party took the Sublette Cutoff in 1849, wrote on July 2 of that year, “We camped here to rest the stock and prepare to cross the ‘Jornada del Muerte,’ a waterless desert extending fifty miles or more to the Green River of the Colorado.” 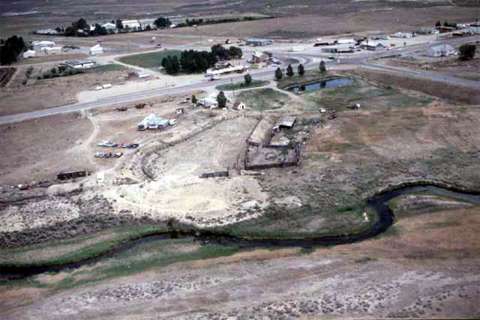 Knowing they could not allow themselves to be caught without food or water on this trek, emigrants prepared carefully. “Repacked wagons,” Wistar’s diary entry continues, “[and] filled every vessel that would hold water and overhauled the mules’ shoes and harness.”

The California Gold Rush brought hordes of travelers in 1849 and 1850. H.C. St. Clair traveled on the Sublette Cutoff. On July 8, 1849, he noted “100 wagons camped here [at Big Sandy] and as many more a few miles below, all awaiting to cross the cutoff [desert] tomorrow night.”

Though travelers could not cross the whole desert in a single night, the dark hours brought cooler temperatures and, at dawn, possibly some dew for thirsty livestock.

Despite difficult conditions and fatigue, diarists found time to describe their surroundings. “The soil, hereabouts, is curious,” wrote Joseph Sedgley July 17, 1849, on the Sublette Cutoff. “In some places it is red, in others yellow, and in still others, green.”

Israel Lord, also traveling on the Sublette, wrote on July 22, 1849, “A few trees are left standing (i.e., if any more ever stood there) alone in their glory just above the [Big Sandy] crossing, which here is six or eight rods wide [a rod is 5.5 yards], and two feet deep—a fine stream. The whole country is one vast sand bed, poorly covered with sage and bunch grass.”

The Wind River mountains, visible from the Sublette Cutoff, caught the notice of many travelers, evoking a sense of wonder. On Aug. 4, 1849, California-bound J. Goldsborough Bruff wrote, “The Wind-river chain of Mts’ trending off to the N. W. their dark jagged and lofty snow-patch’d fronts within 25 ms. And their northern portion fading away in the blue distance.”

Mendal Jewett’s party took the Sublette Cutoff in 1850. To cross the desert, he and his fellow travelers planned to start in late afternoon “and drive all night,” Jewett wrote on June 4. “We are now pulling grass though not 6 inches high to bait our animals on the route.”

Later that month, on June 18, Clark W. Thompson noticed the array of possessions others had left behind on the Salt Lake road. “We see many pieces of wagons that their owners have cut the spokes,” he wrote, “and other parts to make pack saddles of and parts of harness left, the balance being taken to strap the saddles.”

Despite the occasional good fortune of useful objects salvaged along the trail, some travelers were disheartened by the bleak terrain. “The face of the country presented an extremely desolate and forbidding appearance,” Elisha C. Winchell wrote on June 28, 1850.

The landscape “was varied only by banks, hillocks and irregular, shapeless mounds or broken heaps of sandy earth, producing no green thing save the ever present wild sage and a most miserly sprinkling of grass blades,” Winchell’s account continues. Only the “majestic chain of the Wind River mountains” relieved the eye and spirit from the “dreary monotony and beggarly sterility” of the route.

Nine years later, on Aug. 4, 1859, Eva Morse’s report of the Big Sandy crossing was terse and to the point. “Found a stage station, some wigwams, and what was a greater sight—a cat, a pig and some chickens. Last but not least, a white woman.”

Burton added, “The Indians, in their picturesque way, term this stream Wágáhongopá, or the Glistening Gravel Water.”

The Fort Bridger Route crossed the Big Sandy at present Farson, Wyo. State Highway 28 running southwest from Farson continues to parallel the route. Swales are often visible alongside the highway, sometimes to the right, sometimes to the left.

Just past the intersection of Highway 28 and U.S. Highway 191 in Farson are two historical markers. A few yards south of these markers, a modern bridge crosses the Big Sandy. This is also where the main route forded. The Sublette Cutoff crossed the Big Sandy nine miles west of Parting of the Ways, northwest of present Eden Reservoir. That crossing is difficult to reach because of irrigation canals.