Names Hill, a cliff of soft sandstone on the west side of the Green River, was a popular stopping place for travelers on the Sublette Cutoff of the Oregon Trail. Emigrants at this point had just crossed the river, and many travelers inscribed or painted their names on the cliff face. But before the white emigrants arrived, others had already inscribed a portion of the cliff.

On Aug. 7, 1849, J. Goldsborough Bruff described the cliff and these earlier inscriptions. “Reached an ascent, rather steep, but not high, and just at the foot, on right of trail – 20 paces from it, vertical cliffs of a mouse-colored sand-stone, on the face of which was engraved with a fine-pointed instrument, an Indian diagram, representing 43 rifles, nearly vertical, and a chief and horse, apparently separated from 4 other Indians and a horse laying down, by a stream with a small fork to it.” 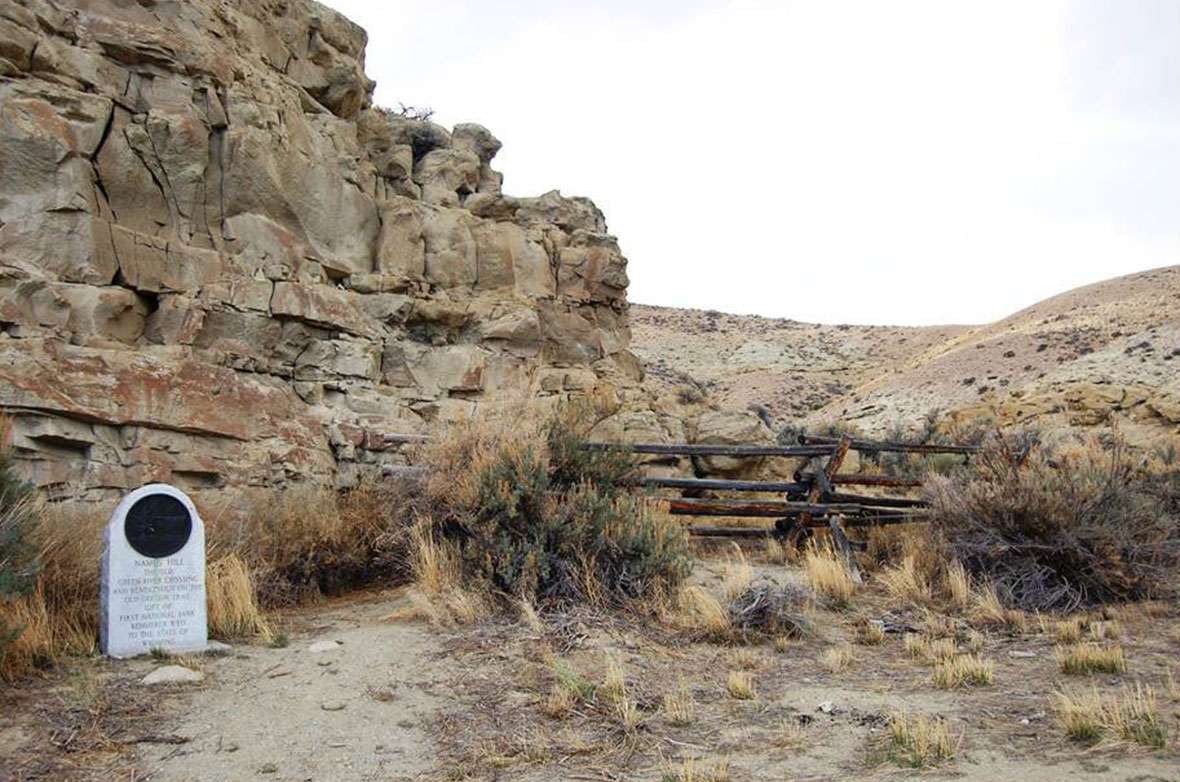 From the spot by the cliff the trail climbed steeply. Above, just to the left of the road, Bruff found a grave with a stone inscribed

“[B]y the names,” Fulkerson’s account continues, “it will be seen that the lady is the mother of the youth, buried in the Rattle-snake Pass, [195] ms, back, which I visited July 26th. The youth died on the 1st. and 13 days after his mother died here.” Frederick Fulkerson’s grave remains today at Rattlesnake Pass near Devil’s Gate.

The following year, another diarist mentioned his party’s recent crossing of the Green. J. F. Snyder’s entry for June 17, 1850, is solemn, perhaps for good reason.

“About nine o’clock we succeeded in getting the wagon ferried over, at the moderate charge of seven dollars per wagon, besides having to row the boat themselves. In this dreary place, I saw several graves, some of persons drowned in crossing the river – For some time, we have passed one or two graves each day.”

Before leaving the river, he continues, “I carved my name deeply in the sandstone, as a notice to my friends behind me, that I had passed. – It will probably remain on that rock, in that lonely place many years after I am gone.” The inscription, showing he was from Belleville, Ill., is still on the cliff.

Emigrants who chose to paint their names, rather than to inscribe them, had to improvise their materials. No doubt, their months on the trail had already improved their resourcefulness.

William Wagner’s diary entry of June 23, 1852, notes that “[h]undreds & even thousands of names are painted or registered upon – the Rocks.” He continues, “The absence of paint or something desirable led to the discovery that the tar or pitch in the end of the wagon hubs was an excellent substitute, & would last a number of years—The pencil used for painting ‘is the finger’ which should be previously greased to prevent the tar from sticking.”

Many travelers were still coming through in 1854, even after the years of the California gold rush, 1849 and 1850, when traffic was highest. W. S. Ebey’s report of what he observed at Names Hill on July 16, 1854, quietly shows, with its list of abandoned objects, the discouragements emigrants faced—and the opportunities those objects offered for those who followed. 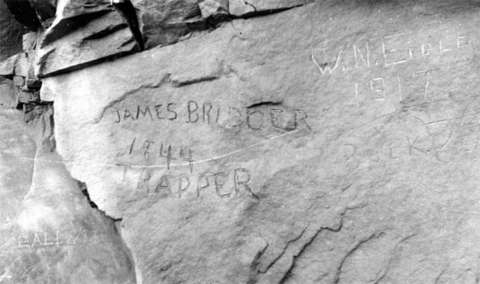 “Formerly many wagons were left here,” Ebey writes. “I am told that 500 have been seen here at one time. Many left them here and packed through. [The wagons] are all burned now but the ground is covered with Wagon Iron, Log Chains, & other hard ware. A great deal of this Iron is now being picked up, & hauled to Salt Lake where Iron commands a high price.”

Mary Fulkerson’s grave was destroyed in the 1930s by construction of a gas line relay station. The Indian petroglyphs have also disappeared, though there are others not far from the site.

The best-known name on Names Hill is Jim Bridger’s. The early explorer, guide and mountain man was illiterate, however, and the inscription is probably not genuine.