On Oct. 5, 1857, a band of Mormon militia attacked U.S. Army supply wagons in three different places in what’s now southwest Wyoming, burning 76 wagons altogether and running off a great deal of livestock. No one was killed in these skirmishes. 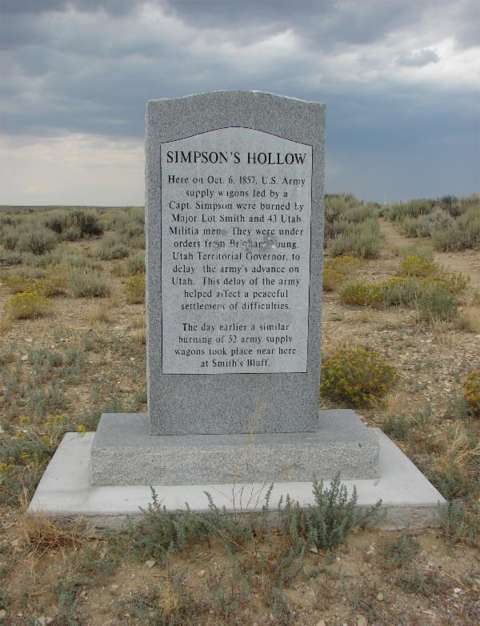 Best known of the attacks was at a low spot in the sagebrush along the trail later named Simpson's Hollow, about 10 miles southwest of present Farson, Wyo., on Wyoming highway 28. The place is named after Lew Simpson, the wagon master. There, the militiamen captured and burned 26 wagons, and stampeded hundreds of army mules.

The supply wagons were part of an army of U.S. troops, 2,500 strong but marching in many small groups, advancing on Utah in the summer and fall of 1857 to enforce federal law in Utah Territory. Mormons had first arrived in the Salt Lake Valley in 1847. Utah had been a territory since 1850, with Brigham Young, president of the Church of Jesus Christ of Latter-day Saints—the Mormons—serving also as territorial governor and chief federal officer of Indian affairs.

Buchanan and others expected trouble in dislodging Young. Although his term had ended in 1854, he had legally kept his post because the only replacement named before Cummings had refused to serve.

The militia, under the command of Capt. Lot Smith, was under orders from church authorities to harass and resist the army, bloodlessly if possible. They burnt supply trains, stampeded stock and burned as much grass as possible, to deprive the animals of feed.

Reports of the skirmish began reaching the East the following month.

On Nov. 14, William Carter, traveling on the Oregon Trail, wrote, “[We] came suddenly upon the smoldering ruins of 26 wagons which were corralled on each side of the road when burned by the Mormons.”

Four days later, on Nov. 18, the New Orleans Times Picayune reported, “The trains were altogether without any escort, and the teamsters made no defense of resistance whatever. … The contents were, I believe, mostly commissary stores. The supply sent out was estimated for a force of twenty-five hundred men for eight months.”

“The Utah expedition was supplied with full provisions for one year,” reported The Tennessean of Nashville, Tenn., on Nov. 21.

“I am authorized to say,” the account continues, “that the expedition will suffer not the slightest inconvenience from the loss of the destroyed trains, and that the force under Col. Johnston – two thousand men all told – are in no peril whatever from either the Mormons or the season.”

This would prove highly inaccurate, as winter was coming on, Johnston’s plans upset and provisions were drastically reduced. The army spent a very hungry winter near Fort Bridger—which also had been burnt by the Mormons—in what’s now southwestern Wyoming. Negotiations the following spring allowed the conflict to be settled peaceably.

In 1859, travelers on the Oregon Trail could still see traces of the burned wagons, and knew of the episode, although not necessarily the precise date of its occurrence. On June 23, 1859, more than a year and eight months later, emigrant J. A. Wilkinson wrote, “We saw today where the Mormons had burned a government train a year ago, giving the teamsters what provisions they could pack on their backs and drove the oxen to Salt Lake.”

“We passed more dead cattle today than any day yet, all of an ancient date however, we saw where several wagons had been destroyed by the Mormons,” John McTurk Gibson wrote on July 19, 1859.

British travel writer and adventurer Richard Burton rode in a stagecoach along the Oregon Trail in 1860. On Aug. 21 of that year, he wrote, “[W]e passed through a depression called Simpson’s Hollow, and somewhat celebrated in local story. Two semicircles of black still charred the ground; on a cursory view they might have been mistaken for burnt-out lignite. Here, in 1857, the Mormons fell upon a corralled train of twenty-three wagons, laden with provisions and other necessaries for Federal troops.”

Thus, Simpson's Hollow became notorious. The destruction of wagons in the vicinity, the burnt grass and evidence of other guerrilla tactics used by the Mormon church against the U.S. government marked an episode in what historians David L. Bigler and Will Bagley have called “America’s first civil war.”

On the north side of State Highway 28, there is a historical marker about Simpson's Hollow, and on the south side, Pilot Butte Interpretive Site, with more recent information. 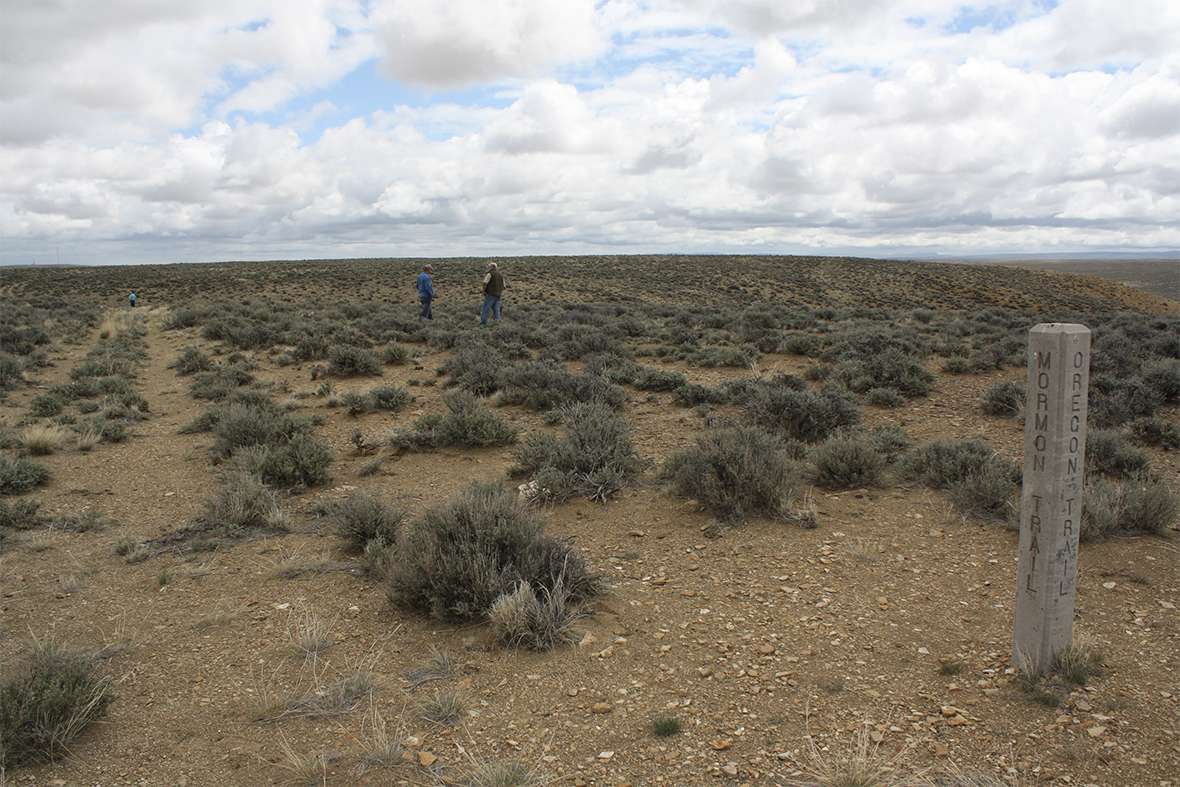 To visit Simpson’s Hollow, where Mormon militiamen attacked and burned a U.S. Army wagon train in October 1857 during the bloodless Utah War, travel about 12 miles west of Farson, Wyo. on Wyoming Highway 28. A stone marker and two Bureau of Land Management markers, all on the north side of the highway, commemorate this spot on the Oregon-California-Mormon-Pony Express Trail. For more information on the trail and to see a marked stretch of it, stop also at the Pilot Butte interpretive site on the south side of the highway, about three-fourths of a mile west of the Simpson’s Hollow markers.