The Grave of Daniel Lantz

The Grave of Daniel Lantz

The National Road, the first federally sponsored highway, enters Indiana just east of the town of Richmond, passes directly through it and heads for Centerville six miles west. From there it continues across the Wayne County toward Indianapolis. Funneling traffic west, the road was extremely busy during the peak years of the California Gold rush, 1849 and 1850.

During the Gold Rush years beginning in 1849 there was a very large emigration of men from the towns, villages and farms of Wayne County. Out of about 110 graves that can be identified on the Oregon-California Trails across the West, 53 are in Wyoming. And remarkably, three of these Wyoming graves are graves of Wayne County people.

Two of the Wyoming graves, of Alva Unthank and Martin Ringo, are in Converse County, Wyoming, a mere eight miles apart, just a little nearer than their homes had been in Indiana. There is no other connection between the two. Unthank died in 1850, Ringo in 1864. 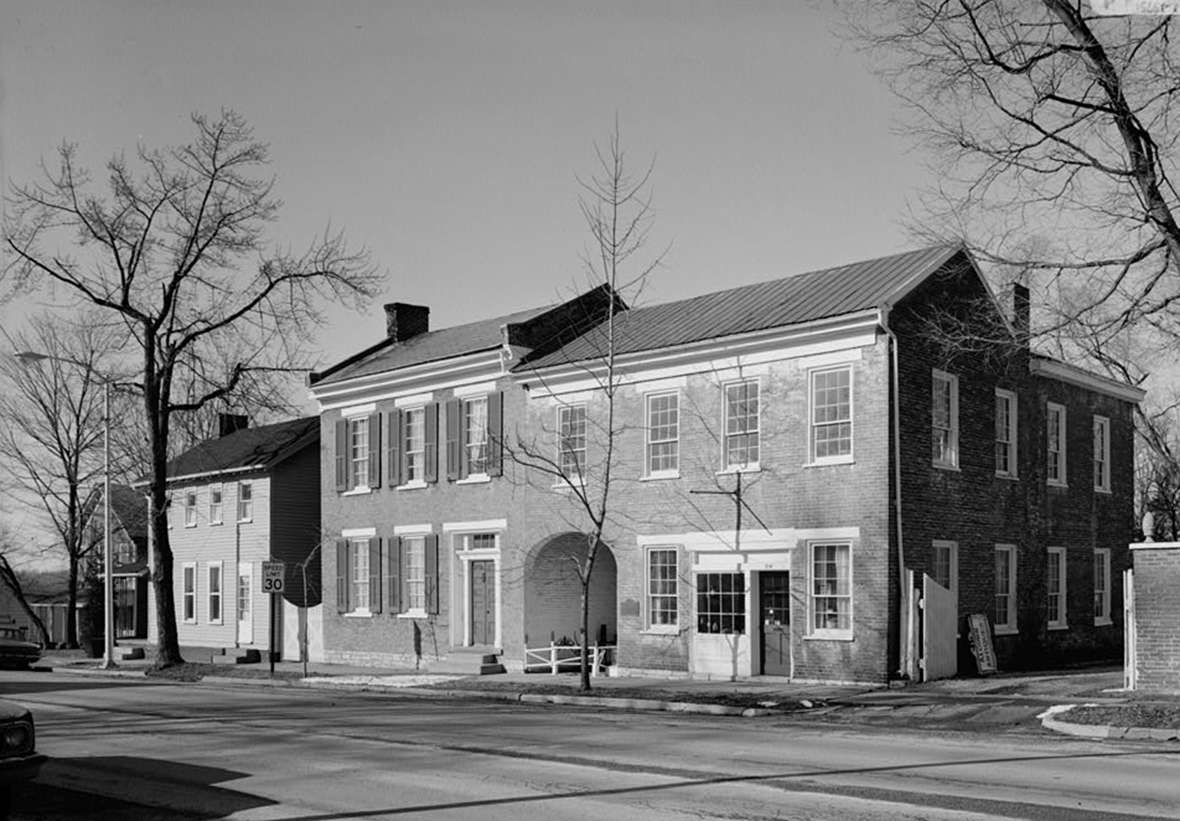 The third grave of a Wayne County resident is that of Daniel Lantz of Centerville. He is buried about five miles north of present Granger, Wyo., near the near the western border of Sweetwater County in southwestern Wyoming.

Daniel Lantz was a native of Fairfield County, Ohio, where he was born about 1803. In 1832 he married 16-year-old Mary Elizabeth Wilson of Pittsburgh, Pa. In 1833 they moved to Centerville, where Daniel’s wagon-making business took off. Business was so good that in 1835 the couple could afford to buy a substantial brick home on Centerville’s Main Street, the local name for the National Road.

They built a substantial two-story residence that was connected to the shop by a spanner arch, through which Daniel could wheel his completed wagons and present them for sale. The Lantz home is a landmark in the town to this day.

Daniel Lantz was a member of Centerville’s Oddfellow’s Lodge, Hoosier Lodge No. 23, I.O.O.F. Their lodge meetings were held in a room above the shop in the Lantz house. Access to the room was limited to a single doorway just inside the arch. The door at the top of the narrow stairway has peepholes, and there are pulleys above the windows that were used to lower blinds to insure lodge privacy.

By 1850 Daniel and Mary Lantz were parents of five surviving children. Henry, the oldest, was 15, followed by John, 13, Thomas, 6, Amanda, 4. Lewis, the baby, was just 2. When the census taker came in August, Mary estimated the value of their real estate as $2,600—that magnificent house and wagonmaker’s shop. By then, probably unknown to Mary, her husband was already dead.

That spring Lantz had joined a company of men from Centerville, including diarist James Seaton. They traveled first to Cincinnati and then by steamboat down the Ohio and up the Missouri River to St. Joseph, Mo., where they joined up with a company from Richmond. Smaller contingents from the neighboring towns of Economy and Boston, Ind. also joined the party. The “Richmond boys,” as they were called, included diarist Henry Starr. Thus, two excellent journalists, Seaton and Starr, described the company’s travels and eventually the illness and death of Daniel Lantz.

On July 3 the company reached the Parting of the Ways west of South Pass between Dry Sandy and Little Sandy creeks and turned left toward Fort Bridger and the Salt Lake Valley beyond it. They celebrated the Fourth of July in grand fashion and all seemed well, but on the following day James Seaton wrote: “This day D. Lantz was taken quite sick.”

On July 6 three more members of the company were stricken with what Starr called the “flu.” Seaton called it “the bloody flux”—dysentery—very likely the correct diagnosis. They stayed in camp all day and tended the men who were ill. All except Lantz improved and eventually recovered.

On July 7, Seaton wrote that Lantz thought he was able to go on, so they drove 10 miles to the Green River and ferried their wagons across. The river was very high; they did not succeed in getting the cattle to swim the river until the evening of July 8. The next day they went 18 miles to the Blacks Fork of the Green River and camped near the road about a half-mile from the river where, according to Starr, they found excellent pasture for their stock.

Seaton wrote on July 10: “As Lantz was getting worse it was agreed to stop until there was a change in him for better or worse.” Starr wrote: “We had to ly by today. D Lance having got worse and being considered by the Physician unfit to travel … we have a beautiful camping Place “

Seaton on July 11: “As Lantz was not improving any it was now feared he could not live. The Dr. said he could do nothing for him and did not believe he would live another morning.”

On the morning of the third day at their camp at Blacks Fork Daniel Lantz died. Seaton wrote: “Mr. Lantz is still alive but insensible. He lived until 9 ½ o’clock A. M. When he was no more he was buried at sunset near the road in a very decent manner. His grave was marked by a neat stone. His disease was the bloody flux. There are 10 more get the same disease but none dangerous.”

Starr: “D Lance died this morning In him we lost a most exemplary man one whom we always found cheerful and resigned come what would. We gave him as good and decent a Burial as we could. but it looked hard to consign him to the grave Coffinless.”

Someone in the company carved an inscription on the headstone that read: “Daniel Lantz of Centreville, Wayne County, Ind. Died July 12. 1850. Age 47 years.”

Near the top of the stone were carved three linked rings with the initials F, L and T, one letter in each link, representing Friendship, Love and Truth, a symbol of the Odd Fellows Lodge. Fragments of this stone still lie over the grave.

On July 13 the company rolled on toward California and Seaton wrote: “This morning we again started but [with] feelings of regret for having to leave a friend behind.”

It’s not known when Mary Lantz learned of her husband’s death, but on Oct. 23 a death notice appeared in the Richmond Palladium that is somewhat judgmental in tone and misspells his name. It reads in part: “Mr Lautz was an honest, industrious man, and was acquiring at his business a competency before he left home—but ambitious for sudden wealth he concluded to try his fortune in the far West.”

We cannot know for certain whether Lantz expressed any regrets in his final days when it became evident that death was near. Still, Henry Starr’s diary entry may give us a clue: “… [A] most exemplary man one whom we always found cheerful and resigned come what would.”

If in fact Daniel Lantz’s last words were “cheerful and resigned,” we might infer that any feelings of regret were not bitter ones, and that at the end he did not condemn himself for having been foolish. Like so many others in the Gold Rush, Daniel Lantz gambled and lost. 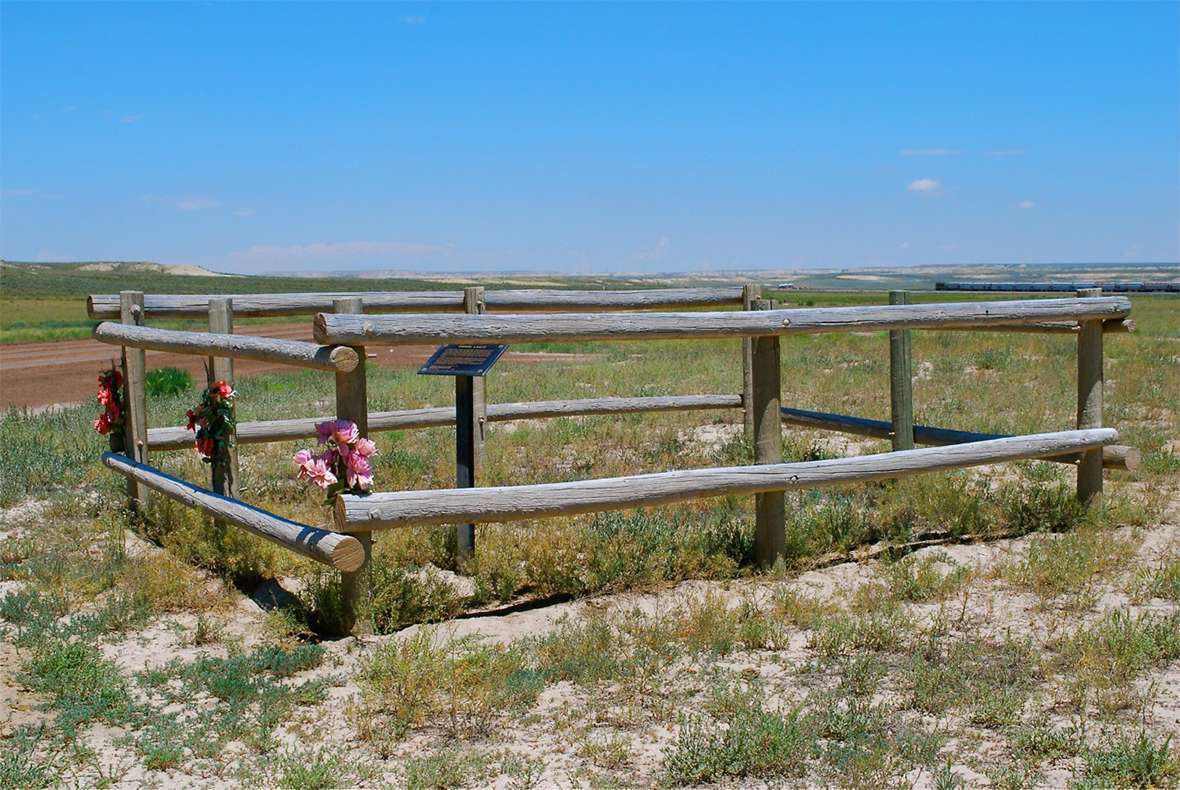 To visit the grave of pioneer Daniel Lantz, of Centerville, Ind., who died in 1850 on his way to gold-rush California, take I-80 exit 66 in southwestern Wyoming and head northwest on U.S. 30 toward Granger. After about five miles, instead of entering Granger, stay on Rte. 30. Proceed over a railroad overpass and then turn right—north—after about 200 yards. Take this gravel road toward the FMC mine; there are signs for the mine.

The grave is about 3.3 miles from the turnoff on the right side of the road. If traveling east on U.S. 30, turn left before reaching the overpass.

The grave is surrounded by a wooden rail fence. Inside the fence are the grave and a historical marker placed by the Oregon-California Trail Association.

The Alvah Unthank grave is about five miles east southeast of Glenrock, Wyo., across the North Platte River from the Dave Johnson power plant. From Interstate 25, take Exit 160, the east Glenrock exit, and turn north on Converse County Road 27. The grave is on the right, approximately one-half mile from the turnoff, near a small parking area along the road. There are two markers in this parking area for the grave, including an interpretive sign placed by the Oregon-California Trails Association.