Some boys ran away to sea or to join the army. But Pierre-Jean De Smet left his native Flanders to become a missionary to the Indian tribes in the American West. His father had already predicted that he would never be able to lead a quiet life, and his brother described him as "hardy, adventurous and indifferent to danger." 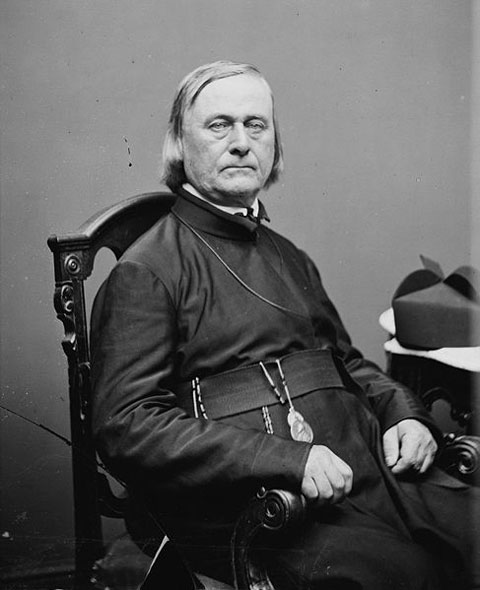 In 1821, without his father's knowledge, he left Mechelen, where he'd been attending Catholic seminary, to go to Amsterdam and await a ship that would carry him and his fellow missionaries to Philadelphia. He was then 20.

St. Joseph's Mission for the Potawatomi tribe at Council Bluffs on the Missouri River in Iowa Territory was established in 1838. De Smet was serving there in April 1840 when he was granted permission by his superiors to travel west as a missionary to the Flathead tribe in the northern Rocky Mountains. For safety and convenience he traveled with the American Fur Company brigade.

The group was headed for the Green River Rendezvous in present-day western Sublette County, Wyo. He was accompanied by guide Ignace la Mousse, the son of a Catholic Iroquois whose people had been converted by French Jesuits after the War of 1812. Some Iroquois now lived among Flathead people, and both desired a "Black Robe," as Catholic priests were called by the Indians, to travel west to instruct them.

Unfortunately, De Smet was stricken with malaria and forced to ride prostrate in a cart for the first part of the 1,000-plus mile overland journey from Westport, Mo., now part of the historical district in present-day Kansas City. Yet by the time he reached the Fort Laramie area, he was well enough to note, "I was often deceived in regard to distances; sometimes I wished to examine. . .a big rock or odd-looking hill; I started for it expecting to reach it in an hour; and it took me at least two or three hours."

Camping at Red Buttes near present-day Casper, Wyo., on June 14, 1840, the party then traveled past Independence Rock where De Smet inscribed his name, "that of the first priest to reach this remote spot." At the Green River Rendezvous, De Smet found the delegation of Flathead and Iroquois sent to guide him to their main camp in present-day eastern Idaho. On July 5, 1840, after resting for four days at the rendezvous, De Smet held the first Catholic mass in the area that is now Wyoming.

Like so many visitors to Wyoming, De Smet was captivated by the beauty of the terrain. Of Devil's Gate, west of Independence Rock, he wrote that a better name might have been "Heaven's Avenue. . .on account of the scene to which it leads. Imagine. . .two rows of rocks, rising perpendicularly to a wonderful height. . .the roaring waves. . .[forcing]. . .a passage, now rushing with fury, then swelling with majesty. . .till finally, as the sight travels through the long vista of lofty galleries, it is greeted by a distant perspective of such mild beauty, that a sentiment of placid happiness steals upon the mind." 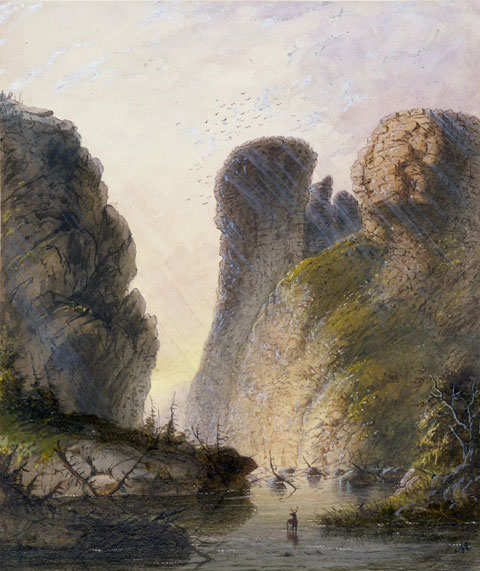 De Smet and his Indian escorts next journeyed north and west, heading along the Green River, probably crossing the Gros Ventre Range to the Snake River into present-day Jackson Hole. On July 12 they reached Pierre's Hole, now Teton Basin, a 25-mile valley at the western base of the Tetons just across the present-day Wyoming-Idaho border. There a camp of approximately 1,600 Flathead, Pend Oreille and Nez Perce people awaited him.

In 1841, on his second journey west to meet again with the Flatheads, De Smet had to travel without the escort of the American Fur Company because he was bringing along too many other people and too much baggage. This time he was bringing five other priests and five loaded carts.

He engaged the well-known mountain man Thomas Fitzpatrick and arrived at the location of the previous year's Green River Rendezvous on July 24, 1841. Met by another Flathead guide, De Smet and his party proceeded to the area that is now eastern Idaho, this time by an easier route via Soda Springs on the Bear River in present-day southeast Idaho. Later that season, on Sept. 24, 1841, De Smet and his fellow priests arrived with their Flathead guides at a point near present-day Stevensville, in the Bitterroot Valley of western Montana. There they built St. Mary's Mission, the first Jesuit mission for Indians in the Pacific Northwest.

In the years 1843-1851, before he again traveled through the area that's now Wyoming, De Smet became so trusted by Indians of all nations, so advanced in his knowledge of the terrain west and south of the Missouri River and so esteemed by the government that he was chosen to meet with the Indians at the Fort Laramie Council in September 1851. Government officials believed his presence would help persuade tribal representatives to sign the Horse Creek Treaty, which promised compensation to the tribes in return for free passage of settlers traveling on the trails, and which identified specific lands for specific tribes.

De Smet's 800-mile overland journey to Fort Laramie from the Fort Union Trading Post on the Missouri River on the current North Dakota-Montana border became a saga. First he traveled on the steamboat St. Ange from St. Louis to Fort Union. There he assembled a party of about 35 men: scouts; Creole, Canadian and mixed-blood Indian-white wagon masters; plus chiefs from the Assiniboin, Minnetaree, Arikara, Mandan and Crow tribes, whom he'd persuaded to attend the council. Starting out on July 31, 1851, the party became lost and had to backtrack several times before entering what's now Sheridan County in northern Wyoming near the base of the Bighorn Mountains, approximately a month later. 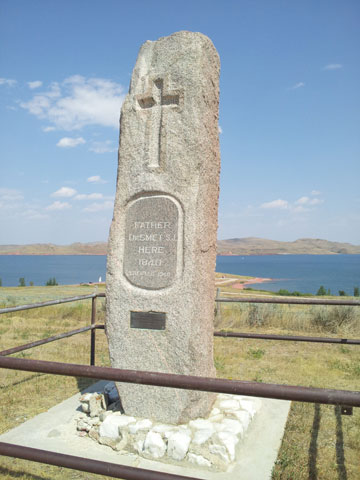 On passing "a lovely little lake about six miles long," six miles north of present-day Buffalo, De Smet's companions named this lake after him. They next proceeded southeast, passing through the southwest corner of what's now Campbell County, where De Smet noted the "Gourd Buttes,” now known as Pumpkin Buttes.

Three Crow braves they met en route misdirected them, and De Smet’s group arrived at Red Buttes near present Casper, Wyo, 160 miles north and west of Fort Laramie. The original planned start date of the council was September 1, but because of other issues, the meeting actually convened on September 8. De Smet was on time because he knew his way from Red Buttes to Fort Laramie.

At the council, as well as advising the gathered tribes to sign the proposed treaty and helping to draw the map that defined tribal territories, De Smet preached and taught. Later he noted, "Each time that I addressed. . .[the Indians]. . .concerning the particular vices which I knew reigned among them, they owned their faults with admirable simplicity and candor. . . ."

According to Robert Carriker, author of Father Peter John De Smet: Jesuit in the West, during his 72 years De Smet traveled 180,000 miles: to Europe for fundraising and recuperation; up the Missouri and down the Columbia rivers to find and convert Indians; around Cape Horn and across the Isthmus of Panama en route to the Oregon country to establish or visit missions; by snowshoe, mule, horse or cart in present-day eastern Washington, northern Idaho and Montana to reach a fort or mission to procure or deliver supplies.

Known among the Indians as the one and only Black Robe, he was almost always welcomed at camps or lodges, and even among the tribes whose members he did not convert, he was respected and venerated.

A monument memorializing Father De Smet’s 1840 celebration of the first Catholic mass in what’s now Wyoming is located on U.S. Highway 189 about a mile south of Daniel, Wyo. in Sublette County. A monument at the Daniel cemetery marks the exact location. Drive three miles northeast from the monument on the highway on a dirt road, Sublette County 188, to the cemetery and another historical marker. It’s well worth the visit. The view of Horse Creek, site of several fur-trade rendezvous in the 1830s in the valley below the monument, is breathtaking.

Lake De Smet and Father De Smet Monument are located near Buffalo, Wyo.  From Interstate 90 about 12 miles north of Buffalo, take Exit 47, Shell Creek Road and head east about a mile toward the lake to the intersection with Monument Road. The monument was erected in 1940 and dedicated by the Historical Landmark Commission of Wyoming in July 1940. The monument says De Smet was at the site in 1840, but in fact he was there in late August 1851.