Crossing the New Fork River was one of the toughest challenges faced by emigrants on the Lander Trail, a branch of the Oregon and California trails in present western Wyoming. Tens of thousands of travelers used the crossing primarily from 1859 to 1869. Many lost their possessions—and some their lives—in the attempt. 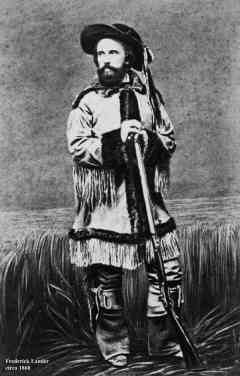 At low water, the river was easy to ford in a wagon. Unfortunately, most westbound emigrants arrived at the New Fork in late June or early July at the height of spring runoff, when the river swelled with snowmelt from the mountains. At this time of year the New Fork and the main branch of the Green River, five miles farther west, were very dangerous.

The Lander Trail would more accurately be called a wagon road. Unlike most other emigrant trails that evolved from horse and game trails, this one was funded, engineered and constructed by the federal government.

The work was done in 1858 under the leadership of its namesake, Frederick Lander, a railroad engineer. This “new road,” as emigrants knew it, left the old road at South Pass near a stage station there, Gilbert’s Station, and continued 256 miles to Fort Hall near present Pocatello, Idaho. The new road shortened the trip to Fort Hall by as many as seven days. In addition, the route was designed to cross the Green far enough upriver that it could be forded without use of a bridge or ferry, which were expensive to build, maintain and protect.

The New Fork River was physically and psychologically about halfway on the long, life-changing trip most emigrants took to California or Oregon. After more than two months, the travelers had just crossed the Continental Divide and were now on the Pacific side of their adventure. They faced an equal amount of hard or harder travel ahead.

Lander chose this crossing to divide the volume of water wagon trains had to ford between the two branches. Further, he located the New Fork crossing at a large island where the split into two channels, again dividing in half the volume of water needed to cross. The Green River crossing actually had two islands--given the attractive name of Mud Islands--and three channels. 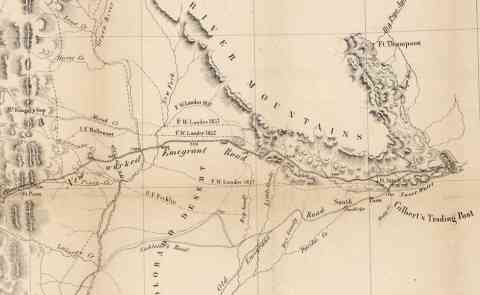 Lander underestimated the seasonal variations in the volume of water at these two crossings, however. At high water, the New Fork River swelled to 60 yards wide and more than 6 feet deep. And the mountain snowmelt water was very swift and frigidly cold.

Fording the river was never simple, therefore. In low water years, or later in the season, emigrants could often cross by raising their wagon boxes. The bed of the wagon would be detached from the running gear, raised with blocks and lashed down with ropes before the animals—usually oxen, sometimes horses or mules—pulled them across. Raising the beds made the wagons more top-heavy and vulnerable, but still manageable, even in 4 or 5 feet of water.

At the deepest point, however, the animals might be under water or swimming. In those instances, a rope was tied to the front of the wagon and pulled by as many as a dozen men on the opposite bank to help the wagon across. A rope might also be tied to the back and held tight by men on the starting bank to steady the wagon against the strong current.

During higher water, emigrants made makeshift ferries from pairs of wagon boxes detached from their running gears, caulked and then soaked overnight to waterproof them, then tied them together end to end. A third wagon could then be dismantled, its running gear loaded into the front wagon box, its contents loaded into the second and the empty box itself towed across the river, floating behind the other two.

A couple of men in the front box would row or paddle, while other men on the opposite river bank would pull with a rope attached to this temporary ferry. Once across the river, the disassembled wagon would be unloaded, reassembled and reloaded, and the two-box ferry would be pulled back across the river to load up the next wagon. Accounts vary, but about 40 wagons could be crossed in this manner in a long day. 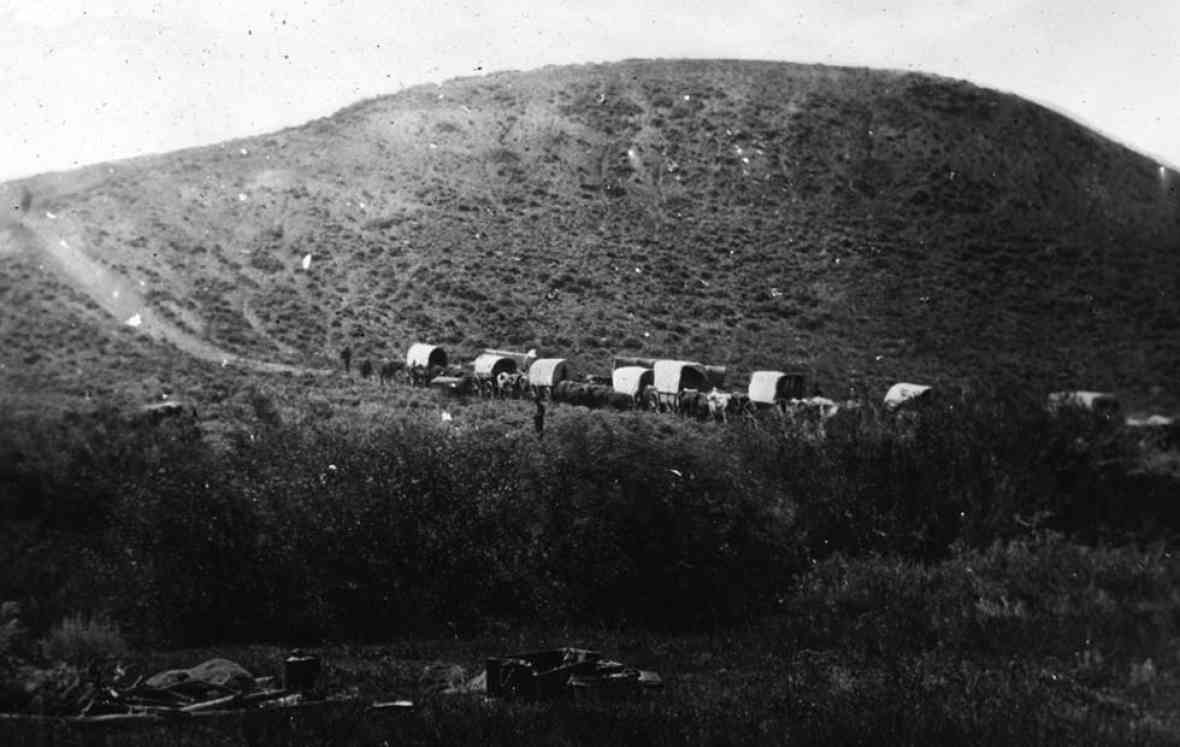 Sheep, cattle, oxen, horses, and mules were forced to swim the river, which they were not eager to do. Cold, fast water added to the risk. Weaker livestock were sometimes swept away by the current and lost. Sometimes it took many attempts to get the animals across.

Diarists often mentioned these hazards. In July 1861, Ira Butterfield noted that a couple of men who were good swimmers stayed in the stream to help the sheep swim across. Reaching the New Fork on July 19, 1862 on his way to the Idaho gold fields, 21-year-old James McClung wrote, “I seen several that had their teams drowned and out of one train a fiew days ago their was two men drowned hear in swimming horses across.” Hamilton Scott recorded in July 1862 having to pull a horse across tied to their wagon box ferry; the rest of the herd finally followed. 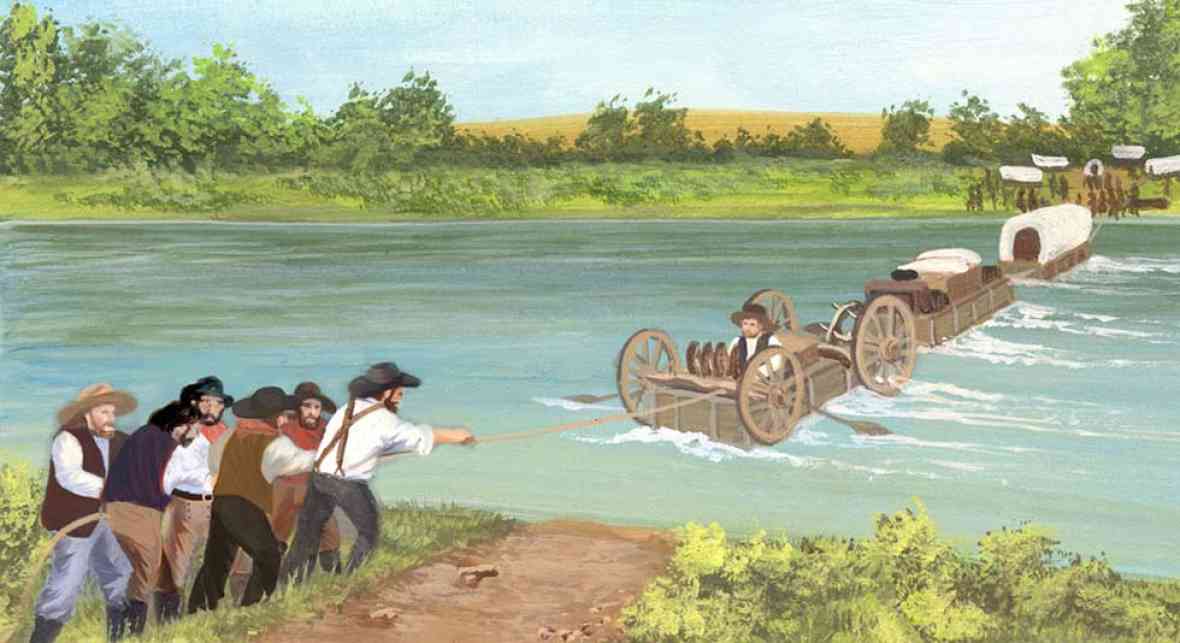 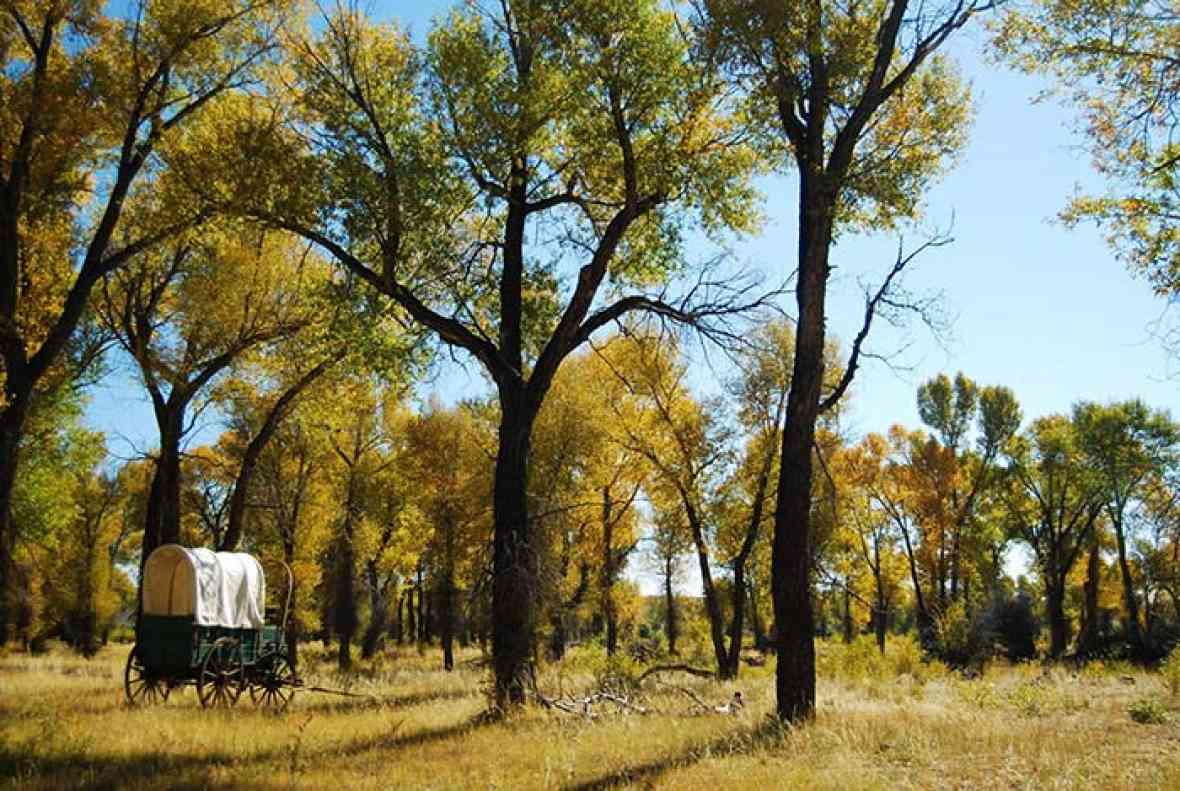 By the peak water year, 1862, some enterprising emigrants had developed a cable ferry over the Green River below the confluence, about 10 miles downriver from the New Fork crossing. However, many emigrants found the $4 per-wagon cost prohibitive.

In July in the 1860s, the New Fork River crossing would have been a very busy place. During 1859, the first year of the opening of the new road, 13,000 emigrants were documented to have traveled that route. There were about five times as many animals as people in the groups. Considering the emigrant season at this location only lasted between 30-45 days each summer, there would have been, on average, several hundred emigrants and a thousand head of livestock stacking up at the crossing on any single day.

Even with the treacherous crossing to come, the lush grass, abundant water, and cottonwood trees made the campsite an oasis where tired wagon-train travelers could rest, repair and recoup. They took the opportunity to fish, hunt, pick wild berries, cook, wash clothes, fix wagons and tend to livestock. But not all was paradise. William Smedley, wrote in July 1862 of “mosquitoes so numerous and voracious that comfort for ourselves or cattle was impossible.”

The completion of the transcontinental railroad in 1869 greatly reduced the volume of traffic on the wagon road, but it was documented to have been used by some emigrants as late as 1912. Parts of the road, including the New Fork crossing, were used for local traffic during the settlement era up to the 1940s, when new highways made the old road obsolete.

In recent years the Sublette County Historical Society has collaborated with the National Park Service, the Wyoming State Historic Preservation Office and other organizations to create a historic park, open to the public from May through October, on west bank of the New Fork River at the crossing site.

As part of that effort, archaeologists in 2011 and 2012, funded in part by a grant from the Wyoming Cultural Trust Fund, conducted investigations on the former island at the New Fork River crossing. (The river runs in only one channel now, having cut through the middle of the old island in the 1950s.)

Many diary accounts show the New Fork crossing was a prominent camp spot. Lander’s reports and map, and later oral history strongly point to this island as the exact crossing location. The archeology helped verify and support those conclusions.

The artifacts are still being analyzed and, as of early 2015, further archeology is planned. The artifacts will eventually be housed at the Museum of the Mountain Man in Pinedale.

Today, most major emigrant river crossings on the historic trails lie on developed private land. This park provides a unique opportunity for access to a river crossing that remains much like it looked when emigrants passed through in the 1860s.

For more information, visit www.NewForkPark.org, email info@newforkpark.org or call the Museum of the Mountain Man in Pinedale at (307) 367-4101.