First described in 1842 by explorer John C. Fremont of the U.S. Topographical Engineers, Warm Springs is one of the most famous water holes on the Oregon-California Trail. About three miles southwest of present Guernsey, Wyo., in northern Platte County, the spring is in a draw or canyon where emigrants carved their names on the sandstone bluffs.

On July 21, Fremont noted the approach to the springs from Fort Laramie. “The road led over an interesting plateau between the north fork of the Platte on the right and Laramie river on the left. At the distance of ten miles from the fort we entered the sandy bed of a creek, a kind of defile, shaded by precipitous rocks, down which we wound our way for several hundred yards to a place where, on the left bank, a very large spring gushes with considerable noise and force out of limestone rock.”

Fremont’s account continues, “It is called ‘the Warm Spring,’ and furnishes to the hitherto dry bed of the creek a considerable rivulet. On the opposite side, a little below the spring, is a lofty limestone escarpment, partially shaded by a grove of large trees whose green foliage, in contrast with the whiteness of the rock, renders this a picturesque beauty.” 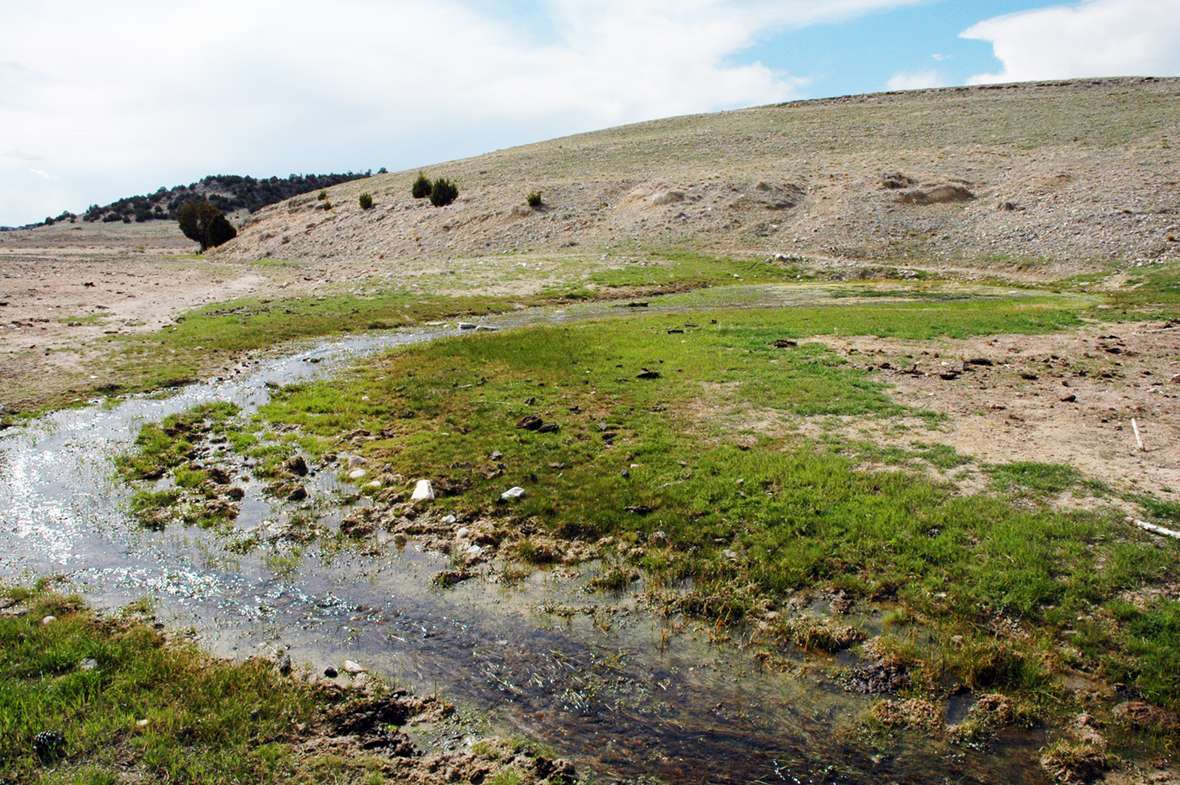 There are two outlets at Warm Springs, one forming a large pool, the other flowing out of rocks about 100 yards east.

In 1849, emigrant Amos Batchelder wrote, "[Warm Springs] comes out of the ground at the foot of a hill of limestone, in a dry, sandy, barren valley, which has a range of high limestone hills on each side, with not sufficient soil on them to support vegetation, except a very few yellow pines, and cedars, and these are small and shrubby. ... A company of men from the fort were nearby, cutting wood, and preparing to burn lime for the fort."

The spring was occasionally called “Lime Kiln Spring” because of these operations. Heating crushed limestone in a kiln produces quicklime, which was an important ingredient in cement. Shortly after starting the lime kiln near Warm Springs, the military moved it to Cold Springs, about two miles north.

Israel Hale, on his way to California during the first of the two most heavily traveled gold- rush years, wrote on June 15, 1849, “We followed the river two or three miles and took across the hill. It was an open rolling prairie with cedar or pine hills in plain view, but no appearances of water until we drove ten or twelve miles, where we found a fine spring. ... It affords us as much water as House Spring of Jefferson County, Missouri. The water, however, was warm.”

Also in 1849, John Benson wrote, “In going up a hollow we came to warm spring, water clear and tasted well. Scenery beautiful. This afternoon a shower fell and layed the dust. We camped about 3 miles from the warm spring.”

Benson noticed many items left along the trail by previous travelers. “This afternoon I counted six abandoned wagons. Saw 8 stoves, two to three thousand pounds of flour and bacon thrown away and perhaps did not see one-half of what was on the road.”

Like Israel Hale, Henry Puckett was one of many travelers who commented on the unusually warm temperature of the water. On June 23, 1850, Puckett wrote, “These springs are quite a curiosity. The water gushes up from under a high bluff, in such quantities as to form a considerable stream, and its temperature at all seasons, is considerably warmer than the river water in summer. During our afternoon walk we saw acres literally covered over with different varieties of cactus – many of them in full bloom.”

Sometimes called “Big Springs” by the emigrants, Warm Springs is known in Wyoming folklore as the “Emigrants’ Laundry Tub” because the pool formed by the spring was a convenient place for travelers to wash the trail dust out of filthy clothes.

One 1850 traveler, Pusey Graves, washed his clothes in the pool on June 24. Graves wrote, “We all felt an unusual buoyancy of spirits on entering this region; the change from the mountain to the valley air was truly pleasant and agreeable. … I proceeded to the spring a distance of 1 ½ miles with my bucket of dirty clothes. Instead of taking the road I passed over the hills and ravines to gaze on Nature’s beauties. For up to this time our road was apparently a dead level and the scenery dead and sullen monotony.”

There are five graves near Warm Springs, including the grave of a Dr. McDermott of Fairfield, Iowa, who died on June 21, 1849, at the age of 28. Many emigrants commented on McDermott’s grave, possibly because of its unusual appearance.

On June 27, 1852, California-bound Richard Keen wrote, “On an eminence about 200 yards from the spring, I accidentally came upon a grave which made quite an impression at the time. Here was a grave neatly finished and well paved with small boulders and on his headboard was nailed his epitaph which he had procured before starting, a physician’s sign or shingle. It read Doctor McDermott and under was scratched the date of his death which is June 21st 1849. He sleeps here alone in these rugged mountains far from the road and in a place seldom seen by a White man.”

On this day Keen inscribed his name on a bluff a half mile beyond Warm Springs, “R. A. Keen.” The inscription is still there along with seven or eight others.

Warm Springs and the surrounding land, though owned by the state of Wyoming, is controlled by the National Guard camp in nearby Guernsey, Wyo. Permission to visit this area must be obtained at Camp Guernsey.

The Warm Springs area remains undeveloped and little changed since Oregon-California trail days, except for fences and grazing cattle.

The photo of Warm Springs is by Gary Schoene of the Wyoming State Historic Preservation Office. Used with permission and thanks.