The Death of Charles Bishop

The Death of Charles Bishop

With the onset of the California gold rush in the spring of 1849, the old Oregon–California Trail suddenly became inundated with hundreds of wagon companies from all parts of the United States. Unfortunately, in addition to their heavily loaded wagons, the forty-niners also brought to trail campsites the scourge of Asiatic cholera, part of an epidemic then raging in towns and cities across much of the nation. Hundreds died of the disease and were buried on the trail.

Today there are ten known forty-niner graves still existing on historic trails across the West, most of them graves of emigrants who died of cholera.* Charles B. Bishop of Washington, D. C., buried near the Nebraska-Wyoming state line, is one of these.

Very little is known of the personal history of Charles Bishop. His death certificate, filed in Washington, D.C., shows that he was born in Maryland and worked as a plasterer. Bishop was a member of company of emigrants called The Washington City and California Mining Association, organized and captained by J.G. Bruff, a clerk in the U.S. War Department’s Topographical Bureau. Bruff kept a detailed diary of the trip, made even more vivid with many sketches he drew along the way. 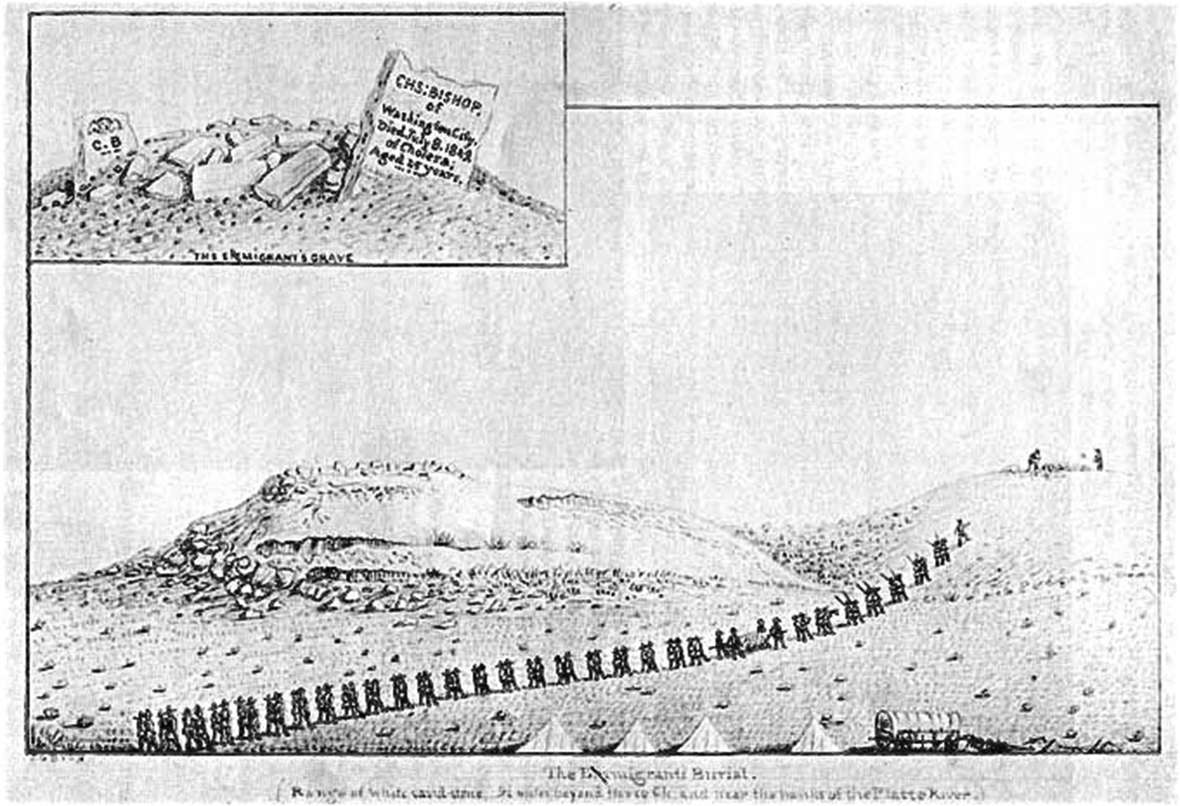 Bishop is among those listed in the roster as residents of Georgetown, a D.C. neighborhood. According to Bruff, Bishop had served in the U.S. Army “on the Rio Grande” as a non-commissioned officer during the Mexican-American War. There are references to a family in one of the documents relating to his death, but thus far the family cannot be identified.

The Washington City Company made quite an impression when it was organized, composed as it was by members of some of the capital’s most prominent families. Published rosters name 66 men and officers as members. Despite his apparent experience in the Mexican War, Charles Bishop is not listed as an officer. In fact, he was probably one of the company’s more humble members.

They formed a military-style organization complete with uniforms. A report in Baltimore and Newark, N.J., newspapers described the miners’ outfits as “grey; single breasted coat, with eagle buttons; black stripe down the outside seam of the pantaloons; flat leather cap, with the initials in front, ‘W. C. C. M. A.’ Every member is armed with a revolver, belt knife and hatchet, and a rifle, and provided with five hundred rounds of cartridges.”

A charter of organization was drawn up and each member signed it, all agreeing to abide by its strict military protocol. On April 2, 1849, the association assembled in Lafayette Square and, after a brief meeting with President Zachary Taylor in the White House, the Washington Light Infantry militia escorted them to the depot where they took the train to Baltimore, the first leg of their long trip to California. 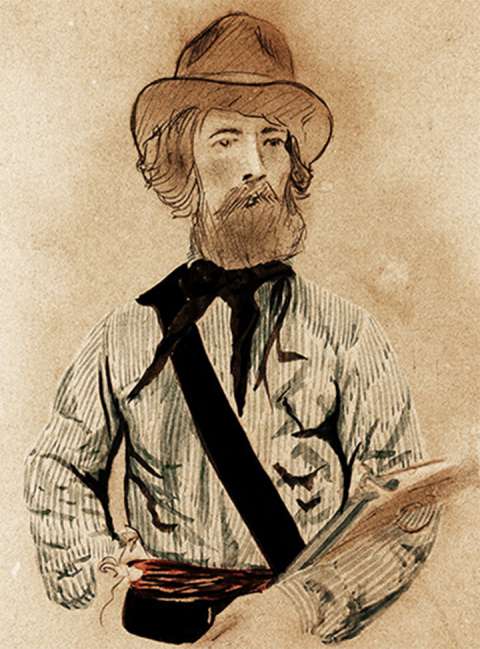 Eventually they boarded steamboats in St. Louis that took them to Lexington, Mo., where they boarded the Meteor for the remainder of the trip to St. Joseph, Mo. A glimpse of the company on board the steamer Belle Creole out of St. Louis is provided by a correspondent to the Burlington (Iowa) Hawk-Eye: “Last evening just after we passed St. Charles the Metropolitan boys (members of the W. C. C. M. A.) formed a coterie in the saloon and favored us with several popular glees, duetts and songs which went off with great spirit. Thereupon the Massachusetts boys brought out a Clarioneet, Violin, and Tamborine. Rarely have I witnessed a happier throng than the Californians of the ‘Belle Creole’ last evening.”

They reached St. Joseph on April 27 but were not able to cross the Missouri until June 4 and then only after they had traveled north along the river about 80 miles to a site almost opposite present Nebraska City. From there they followed a seldom-used branch of the trail to Fort Kearny on the Platte River. This allowed them to avoid routes farther south in what are now Kansas and southeastern Nebraska, where cholera was taking a heavy toll. That choice appears to be the best explanation of why Charles Bishop would be the company’s only death from cholera while crossing the plains.

Bishop may have had a predisposition to the disease. He had already come down with a case of cholera while on board the steamboat on the way to St. Joseph. The company doctor, Henry Austin, who had successfully treated him on that occasion, told him he was unlikely to survive another attack.

They crossed the present Wyoming-Nebraska state line on July 7. Five miles farther they camped for the night in a wide meadow near the North Platte River southeast of present Torrington, Wyo. After they camped Bishop “complained of indisposition,” Bruff wrote, but was able to take his turn on guard duty at 2 a.m.

At 7 o’clock the company hitched up and began to move out. Unbeknownst to Capt. Bruff, one wagon and tent was left behind in which the stricken Bishop lay suffering with a full-blown case of cholera.

In his diary Dr. Austin wrote: “The train started on the march leaving one wagon in which the sick man was behind. I stayed of course to attend to him. The symptoms continued to be Less favorable. The train was stopped before it proceeded far on the road and returned and layed by for the day.”

Capt. Bruff added other details: “On walking back to the tent of the unfortunate man, I found the wagon of his messmates standing there, and the Surgeon attending him. The Dr told me he had all the symptoms of Asiatic cholera. His messmates said that for several days he had complained of indisposition, and had also drank of Slew [stagnant] water, which I had cautioned the men against using. At 11 a.m. he was deranged, saying he was not afraid to die, and requesting his friends to shoot him.”

Charles Bishop died at 1:00 p.m. on July 8, 1849. He was 25 years old. Bruff described the funeral: “The messmates of the deceased laid him out, sewed him up in his blue blanket, and prepared a bier, formed of his tent-poles. I had a grave dug in a neighboring ridge, on left of the trail, about 400 yards from it. Dry clay and gravel, and coarse white sand-stone on the next hill, afforded slabs to line it with, making a perfect vault. I lay 3 hours in the hot sun, and sculptured a head and foot stone; and filled the letters with blacking from the hub of a wheel.”

Bruff continued: “I then organized a funeral procession, men all in clean clothes and uniforms, with music, (a key-bugle, flute, violin and accordion) and two and two, with the Stars & Stripes over the body, we marched to the measured time of the dirge, deposited the body of our comrade in the grave, an elderly gentleman read the burial service, and we filled up the grave, erected the stones, and returned to camp. Capt. McNulty, his Lieutenant, and a firing party of 8 men in uniform (NY Comp) came back some distance & participated in the last rites over the adventurer’s grave. The sun shed his declining rays over the scene. (Lowered the body into the grave with bridle-reins.)”

In the Oct. 1, 1849, issue of the D.C. Daily National Intelligencer appeared an obituary for Bishop headed “Camp ‘Washington,’ Twenty five miles East of ‘Fort Laramie’” that contained seven clauses. Clauses one and two read: “At a meeting of the Company it was unanimously resolved – 1st. That we deplore with feelings of great regret, the sudden death of one of our most amiable and beloved members, Mr. CHARLES BISHOP. 2d. That we deeply sympathized with the relatives and friends of our departed brother, who are called upon to mourn a loss so great, both to the social hearth and society.”

The story closed with a description of the grave. “We buried him upon a small hill near the roadside, in a stone coffin. A neat head-stone marks the spot, upon which is cut this inscription. 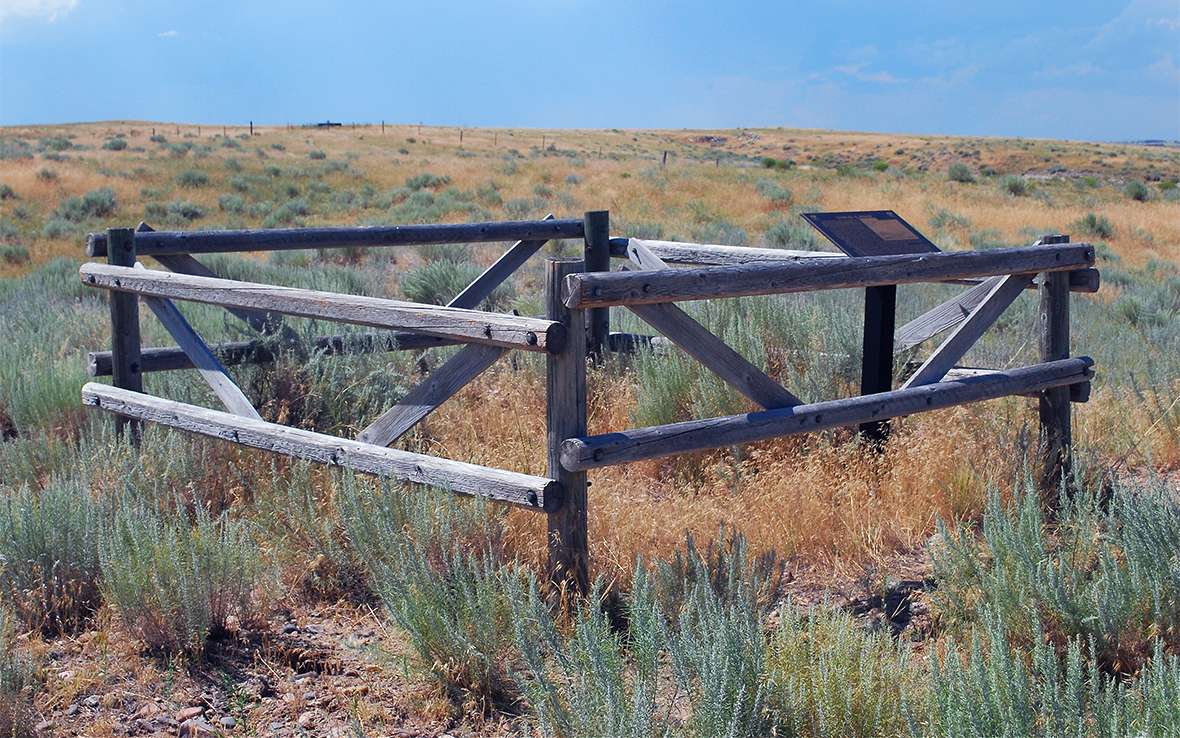 Forty-niner Charles Bishop dies of cholera on the Oregon-California Trail. He is buried near Torrington, Wyo.

More about Torrington at Wyoming Places