Mexican Hill, a Steep Descent on the Oregon Trail

Mexican Hill, a Steep Descent on the Oregon Trail

The Oregon Trail headed west from Fort Laramie via several branches, most of which eventually merged in Warm Springs Canyon after about 14 miles. Two of those branches, the Bluff Road and River Road trail segments, join at a place marked by huge, sandy swales about four miles from the fort. In another mile and a half the trail descends to the North Platte River bottom via a steep, rocky hill, a kind of chute where the iron wagon tires carved out deep ruts in the soft sandstone bluff. 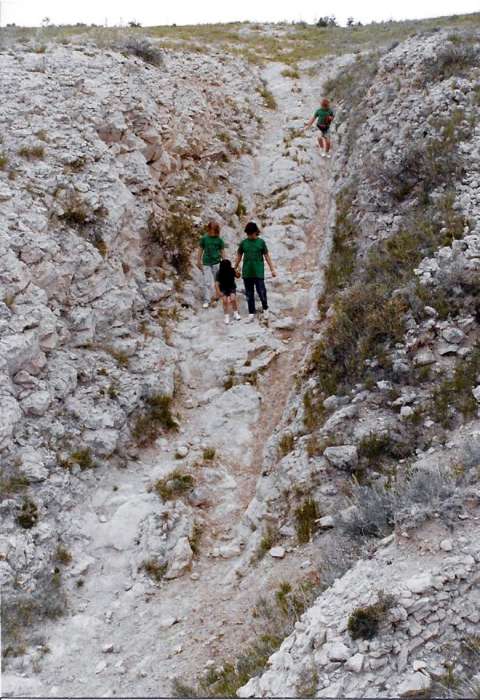 The site is now called Mexican Hill. It is on the south side of the North Platte River, seven or eight miles east of the much better-known Oregon Trail Ruts and Register Cliff sites.

The name “Mexican Hill” is derived from a group of Spanish speakers who lived in dugouts at the base of the hill. Reportedly, they had been brought from the southwest in 1841 by the American Fur Company because of their skill in building with adobe. The story goes that they were employed during the construction of Fort John—the 1840s adobe version of Fort Laramie that replaced the original wooden stockade—or in building another trading post nearby, Fort Platte or both.

After the posts were built, the people settled there for a time, and raised vegetables in the river bottom to sell to the traders and travelers at the forts. The story of the settlement may be a local legend and cannot be documented, but there are also reports that dugouts—remains of the Mexican dwellings—were still visible near the foot of the hill up through the early 1950s.

Diarists noted the challenges they encountered on this treacherous spot. In his “Emigrant’s Guide,” Mormon pioneer William Clayton described the hill as “very steep” and “dangerous to wagons” although he also noted that it was “not lengthy.”

The Mormon Pioneer Company led by Brigham Young arrived at Mexican Hill on June 4, 1847. Thomas Bullock, company clerk, recorded the difficulty of the descent, writing, “The road is very irregular & uneven. We came to a very steep bank of Sand where the teams had to halt several times . . . After the ascent, continued our route by the River. We had a very steep hill to descend between 4 & 5. We not only locked Wheels, but had attached ropes to the hind end of the Wagons [with] the brethren holding back [at] the same time.”

Forty-niner J. Goldsborough Bruff arrived on July 12, 1849, and wrote: “A steep and rugged hill to descend beyond this [the grave of T. Green]. High perpendicular white Sandstone cliffs in an acute angle of the river, where it turns left then right, and the trail descends to a grassy bottom, where alongside a large island, thick with willows, a short distance below the bend, my Company were camped.” Other emigrants also mentioned graves near the foot of Mexican Hill, but they are now lost.

Some diarists attested to the wreckage created at the bottom of the hill when travelers lost control of their wagons. On July 4, 1849, Elisha Perkins witnessed one crash near the bottom of Mexican Hill:

“At 11 we came to a steep descent & Cross being a little in advance went over first & and as I came to the top I saw a sight about half way down for fourth of July! There was the old cart bottom side up all the goods & chattels spilled out & Cunningham underneath the whole! In descending the hill both shafts had again broken & the body swung under the axle capsizing the cargo animate and inanimate as I have described. Cunningham crawled out from under his sugar & flour & somewhat discomposed, but unhurt & we began to deliberate what was best to be done. . . .

When Henry Starr came to Mexican Hill with his company on June 15, 1850, he noted in his diary that travelers still used ropes attached to the back of the wagons to try to slow their descent and control their speed. Eventually a detour with a long, gradual slope to the river bottom was developed a mile or so farther west. The Mexican Hill descent was abandoned. 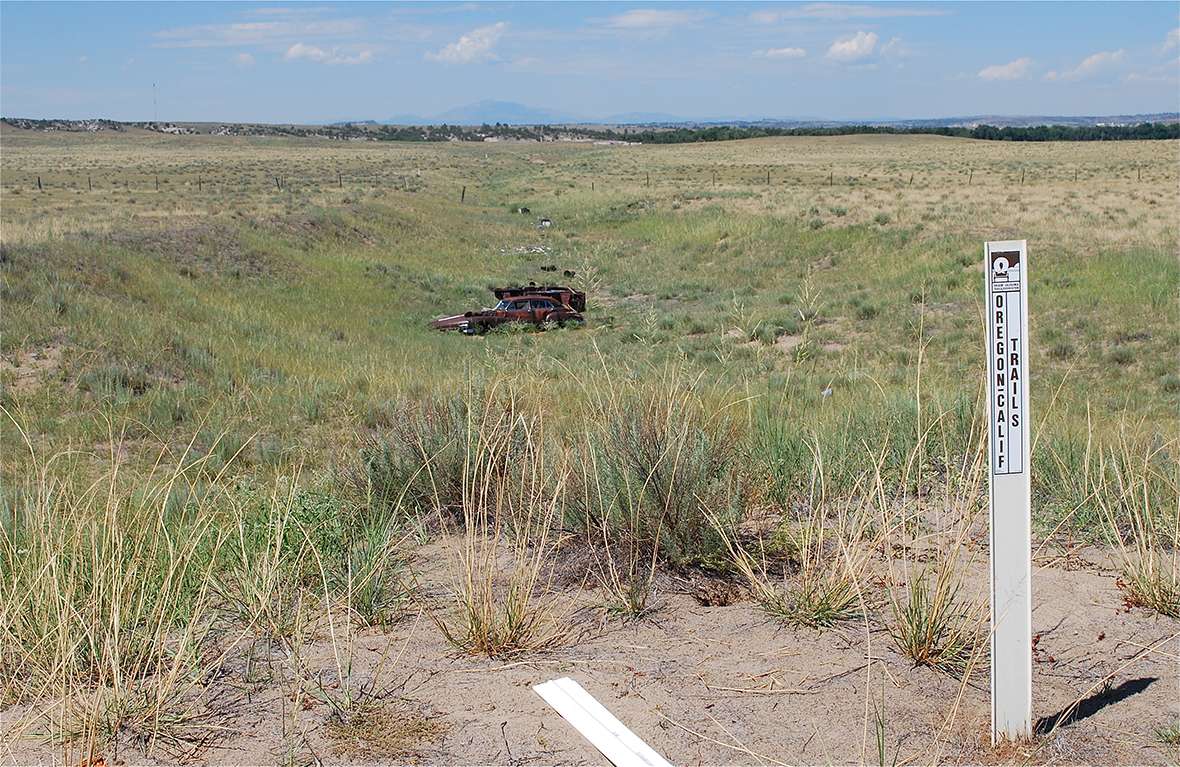 Elisha Perkins finds a wagon “bottom side up” at the base of steep, rugged Mexican Hill near Fort Laramie—contents spilled and occupant unhurt.