Emigrant Hill and the Grave of Elva Ingram

Emigrant Hill and the Grave of Elva Ingram

The Child’s Cutoff of the Oregon Trail was opened in 1850. This new route allowed emigrants who had been following the Council Bluffs Road along the north bank of the Platte River to remain on the north side and so avoid having to cross the North Platte at Fort Laramie and then again in the area near what’s now Casper, Wyo.

After leaving the river bottom a few miles east of what’s now Guernsey, Wyo., the cutoff passes through the present town of Hartville. Beyond Hartville the emigrants crossed rugged country hitherto deemed impassible for wagons. 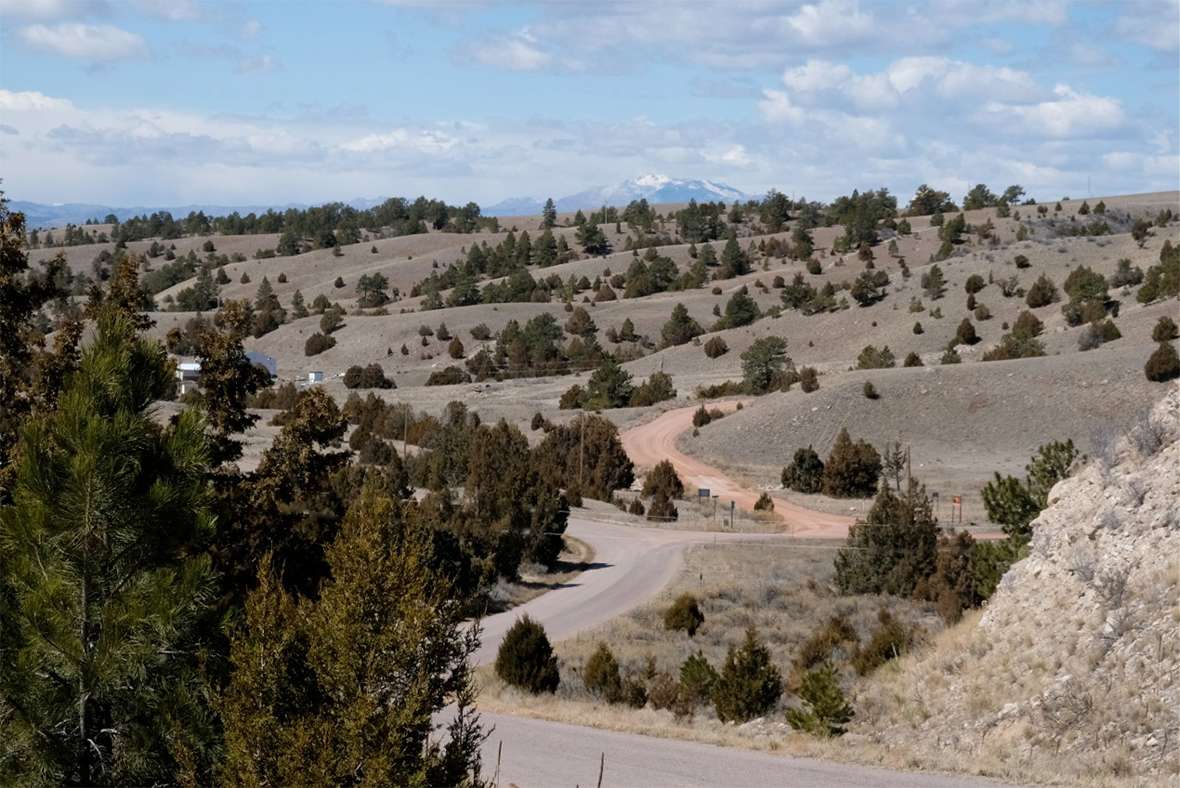 The current highway, Wyoming Route 270, has been built up over deep gullies the emigrants negotiated with their wagons. The current road turns left a few miles north of Hartville and leaves the highway, as does the trail, rises slightly and then descends a steep hill, now called Rocky Pass. According to diarists, this was a very steep and rough descent for the wagons. After reaching the bottom the trail continued down a valley for a short distance and then turned right to climb a steep hill now called Emigrant Hill.

After passing through the present site of Hartville, on July 4, 1852, John McAllister wrote: “After crossing a few more rough places you come to a long rocky descent that will require 2 wheels locked [Rocky Pass], at the foot of this [the] road turns down a hollow for some distance [and] it then turns to the right up a long rocky steep hill that is truly hard on the teams [Emigrant Hill].” 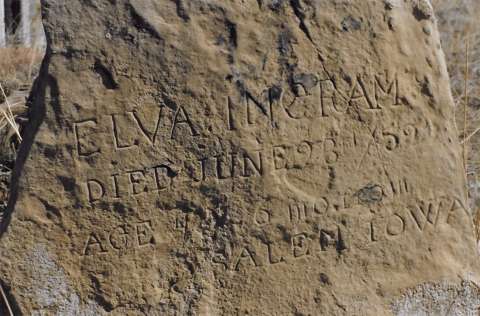 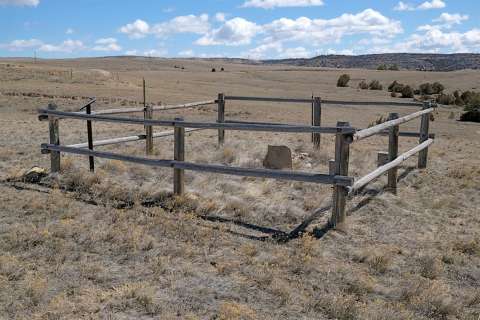 John Clark wrote a colorful diary in 1852 while following the north bank trail. He made up names for the features he described, names that seem somewhat bizarre today. At Rocky Pass on June 13, he wrote:

"From the top of the ridge go down an awful steep [hill] through Grannies Gut [Rocky Pass], a devil of a place with four broken waggons at the foot. We had the wheels all tied & cattle off but one yoke, then the men with ropes to hold back, and a small tree for a dragging anchor. Our dunnage was scattered all the way down. However, we gathered it up with little swearing & drove on to Jacob’s Ladder [Emigrant Hill], where we had to wind waggon & teams up with a windlass. Here we had to put in the extra lick with whip & hard words to the top of another beautiful slope to Battle Creek [Broom Creek]."

The next year, Michael Luark was more subdued than Clark when he wrote, “then passing through a gorge in the mountain between two high spurs 1 1/2 miles we descended a steep rough hill [Rocky Pass] to another small stream. Then down it ½ mile we made a short turn to the right and then ascended a long steep rough hill 1 mile to the summit [Emigrant Hill]. 2 miles more brought us to a dry branch [Broom Creek] near the river.”

There is an unidentified child-sized emigrant grave at the top of Emigrant Hill, and across a deep draw that diarist Byron McKinstry called a “notch,” the grave of Elva Ingram can be found. It is situated on a knoll about a hundred feet above the trail.

Elva Ingram was the daughter of James and Ritta (Akin) Ingram of Salem, Henry County, Iowa. The Ingrams were members of the Caleb and Stuart Richey/James Akin/ James Ingram wagon train. All these families were related by marriage. They numbered 39 individuals when they left Council Bluffs for Oregon in the spring of 1852. Nineteen of them were children under the age of ten, including Elva Ingram who was just over 4 years old. She was not the youngest Ingram child, however. Two other girls, Leana and Louisa, were younger than Elva. Other families named Rhodes, Gilliam and Mace, all from Henry County, plus many unattached men hired to drive teams, were with the company.

This company was plagued by cholera. At least ten in the train died on the trail. Seven from the related families died, including Elva Ingram who died at Emigrant Hill on June 23, 1852.

The only known account comes from James Akin, Jr., whose diary entry on the day of her death is very brief: “Elva Ingram daughter of James and wife died,” is all he wrote concerning the death of his young cousin.

Only two later emigrants are known to have mentioned the grave. James McLung in 1862 wrote that “we passed a beautiful spring some two rods from the road furnishing water in abundance for drinking purposes to quench the craving of the weary traveler. Near here we passed the grave of Elva Ingram who died June 23 1852 aged 4 years & 6 months from Salem Iowa. It is just ten years ago today since the death of this child.” Elizabeth Baker arrived there are few days later, and on July 3, 1862, she recorded a garbled transcription of the headstone, properly recording the name but confusing the date of death with the child’s age.

When Stuart Richey found time to write home from Oregon to his father in Iowa, he summed up his wagon train’s tragic journey with these few words. “It is of no use for me to tell you of our troubles, for words would fail. These are the names of the dead, viz., Louisa Richey, Eliza Akin, James Akin, Sr., Elva Ingram, Miranda Jane Richey, Eliza Ann Richey and Mary Ann Akin. The four last names are children—.” He did not list those who had died from the other families in the company.

Byron McKinstry was there on June 23, 1850, and summarized the route to Emigrant Hill with this entry in his diary: 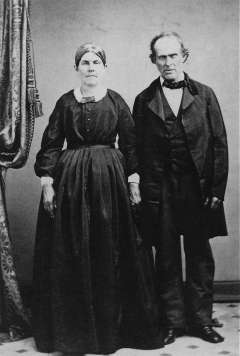 "We bear to the Northward among the hills making a circuit to avoid the high hills that cross the Platte at the first Kanyon. [These high hills now overlook Guernsey Reservoir, which now partially fills the canyon.] After winding among the hills for about 10 m. we passed through a notch and descended to the river again. … We passed some fine springs of pure cold water just before we reached the summit, say 9 m. from the River, but water was scarce on the route."

The “notch” McKinstry refers to is apparently the course of the trail where it dips and passes below the Ingram grave on the shoulder of Emigrant Hill.

The trail passes down the southwest side of Emigrant Hill to Broom Creek and follows the creek nearly to the river. Diarist McAllister described the route, writing, “By descending a very long hill & crossing several ravines 2 1/2 miles the road joins the river.”

Describing Broom Creek, which he called Battle Creek, John Clark wrote, “High ledge of rock encloses the branch for over a mile with good grass on the narrow flat.” An emigrant inscription on the ledge of rock over Broom Creek reads, “J.H. Bradley 1852.” From the river the trail turns north and in 15 miles reaches Box Elder Springs.

Elva Ingram’s grave was rediscovered in the 1920s. The headstone is probably original. About 40 years ago, an officer in the National Guard took the headstone and reportedly incorporated it into a fireplace he was building in his home in Wisconsin. The officer was tracked down and forced to return it. This stone has marked the grave ever since. The fence was built by trails historian Randy Brown and his students more than 30 years ago and seems to be holding up well. A memorable event during the 1987 Oregon-California Trails Association convention in Casper occurred when Dr. Jack Ingram of Medford, Ore., gave a talk at the grave. Dr. Ingram is a grandson of James Henry Ingram, one of Elva’s older brothers.