The Grave of Henry Hill

The Grave of Henry Hill

Identifying the person who lies in an Oregon Trail-era grave on private property in Goshen County, Wyo., has long proved difficult, but it is now certain that the occupant is Henry Hill of Monroe County, Mo., who died June 8, 1852, probably of cholera. Hill was 59 years old when he died, a veteran of the War of 1812 and a native of Virginia. The Hill clans, consisting of more than 30 members from two families related by marriage, made up the majority of the 62-member wagon train from the Paris area of Monroe County.

Henry Hill, son of Samuel and Clarissa (Holloway) Hill, was born around 1793 in Caroline County, Va., not far from Richmond. His father, Samuel, was born in Yorkshire, England, in 1755. In Virginia he became a prosperous farmer, and according to his will, owned two farms and 13 slaves. Henry was the oldest child. There were two other sons in the family, William and George, and two daughters, Anne and Elizabeth. 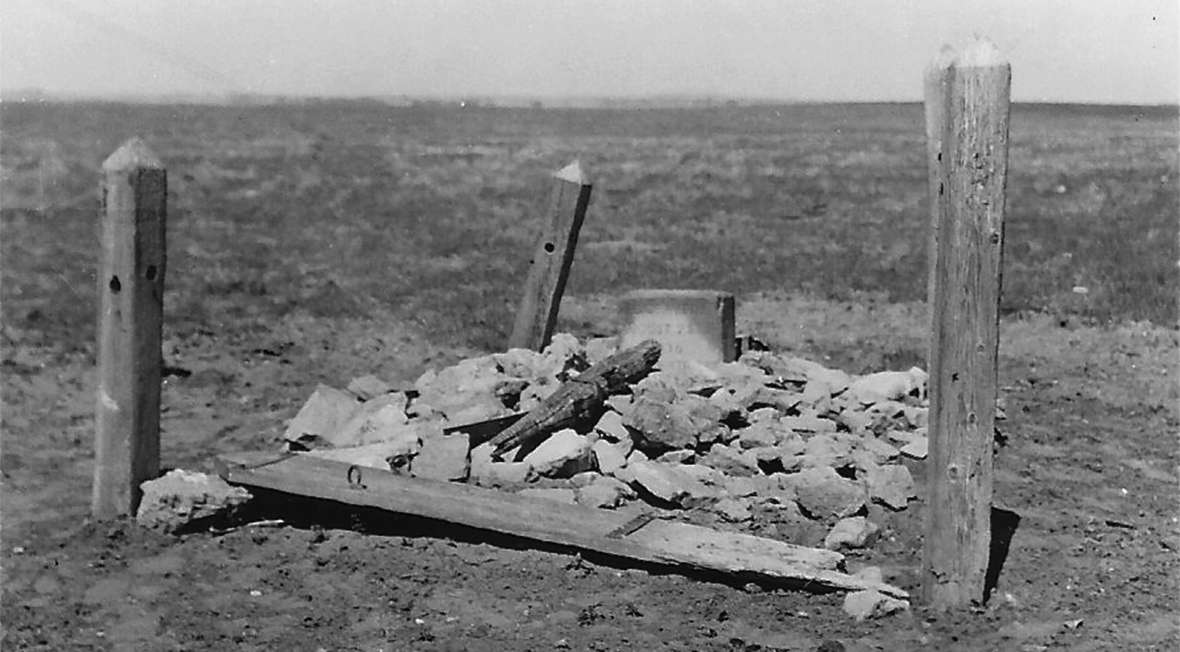 In 1808, Samuel Hill was involved in a violent dispute with a neighbor. The issue of the conflict is now unknown, but Samuel shot and killed Gawin Sommerson and was tried and executed for murder. It is believed that 15-year-old Henry Hill testified during the trial in defense of his father, but to no avail. After Samuel’s death, Clarissa Hill, with the support of her Holloway relatives, raised her children alone. In 1815, they moved to Fayette County, Ky. All five of Clarissa’s children, including the recent war veteran, 22-year-old Henry, went with her to be near Clarissa’s brother John Holloway who had settled in nearby Clark County. The next year, on Sept. 14, 1816, Henry Hill and his cousin Elizabeth Holloway, John’s daughter, were married.

Henry and Elizabeth Hill lived for a time in Clark County where their three children were born: Martha Ann in 1819, Joseph Littlewood in 1821, and Clemencia (Clemency) in 1824. A year or two after Clemencia’s birth they moved to Henry County where Henry had purchased a farm.

Prior to their move from Clark County, the Henry Hill family may have become acquainted with Abraham and Elizabeth Hill and their large family of eight children living in neighboring Bourbon County. Beginning in the early 1830s, brothers Samuel, Wesley, Steven and James Hill of this family moved to Missouri and eventually settled in Monroe County. This was a time when many Kentuckians were heading west to Missouri, and in 1836, Henry Hill followed suit. He sold his Henry County farm and moved with his family to Monroe County, as did Ann (Hill) and William Pickett, Henry’s sister and brother-in-law. Sometime in the early or mid-1840s Henry’s wife Elizabeth died, leaving Henry and his three unmarried adult children living alone on their farm. 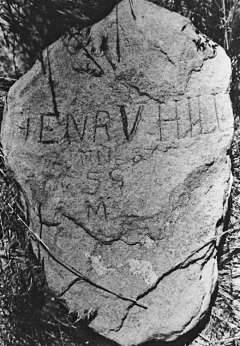 In 1845, 26-year-old Martha Ann Hill, Henry’s daughter, married Stephen C. Hill, one of the Bourbon County Hills who were now neighbors of the Henry Hill family in Monroe County. Although both families had migrated from Virginia to Kentucky in the early 1800s and settled in adjoining counties, it is thought they were not closely related, if at all. In March 1851, Joseph Littlewood Hill, Henry’s son, married Mary Elizabeth Hill, daughter of Wesley Hill, creating a second link between the two Hill families.

In 1849, Wesley and Samuel Hill, brothers of Stephen C. Hill, left Missouri and joined the California gold rush. After a year in the mines, they returned to Monroe County, and like many other former forty-niners, they resolved to head back west and settle in California with their wives and children. The wagon train of 1852 was organized and led by four Hill brothers, Wesley, Samuel, Stephen, and James.

Then in his 60th year, Henry Hill was of an age when he might have thought his travels ever westward were over. He had been born in Virginia and had migrated in turn to Kentucky and Missouri. Why pull up stakes again and go to California? His son, Joseph—married to Wesley Hill’s daughter—and their infant child were going. Henry’s daughter, Martha Ann, married to Stephen Hill, and their three sons would also be in the company. Therefore, two of Henry’s children and four grandchildren were leaving Missouri. It was only natural that Henry and his unmarried daughter Clemencia, who had been keeping house for him, decided that they too would head for California, an overland journey of roughly 2,000 miles.

The wagon train consisted of 62 men, women and children, including 19 hired hands. Of the remaining 43 members, more than 30 were named Hill. They were also driving a herd of

350–400 head of stock. This was a family migration of biblical proportions, and one that would have its share of bad luck. Before they reached California, there would be six deaths in the company.

The only contemporary account of the journey consists of letters written by James Hill to a former neighbor in Monroe County named Jefferson Marr. In a letter written June 15, he summarized the first three of these deaths, including that of Henry Hill:

We have had a great deal of sickness in our train since I last wrote you and have lost three of our company. John Quigley died on the Big Blue. He was taken with diarrhea, was sick about a week. We had a doctor attending him nearly all the time of his illness. About thirty miles below Fort Laramie we was called on to pay the last tribute of respect to Father Hill. Complaint the same. The next morning we buried Eglantines’s little black boy Billy. There has been a great deal of sickness on the road and a great many deaths, some said to be cholera and some of small pox.

The “Father Hill” referred to is Henry Hill. The exact date of his death is known from the inscription on the headstone carved by Robert Gillaspy, one of the hired hands. The information on the headstone is confirmed by a report in the Sacramento (Calif.) Daily Union, a death list compiled by emigrant John Hays, who wrote: “Henry Hill of Missouri, died June 8, 1852, age 59 years.”

It is likely that several of the Hill family contingents had enslaved people with them on the trail, but only two can be identified with certainty, both owned by Eglantine Hill, Wesley Hill’s second wife. Eglantine was the daughter of one of Henry Hill’s sisters. The slaves were Billy, 8 years old when he died, and Davidson, age 12 in 1852, who is listed in a Missouri document in 1848 and later, in October 1852, appears in the California census entry with Elgantine.

The exact site of Billy’s grave is unknown. Likely, it is somewhere near the grave of Henry Hill, but because Billy was a slave, the bodies were probably not buried next to one another.

On July 5, Nancy Jane Hill, daughter of James Hill, died. Her grave still exists, on Dempsey Ridge on the Sublette Cutoff in present western Wyoming. After a long illness, Wesley Hill died on the 40-Mile Desert and was buried at Ragtown on the Carson River in what’s now Nevada. A few days later—the exact date is unknown—Clemencia Hill, age 28, Henry Hill’s unmarried daughter, died. It had been a costly trip for both Hill families.

The Henry Hill grave lies on private property in Goshen County, Wyo., about two miles west of the state line between Wyoming and Nebraska. The Oregon-California Trails Association fenced the grave and provided a marker for it in 1987. The original headstone disappeared sometime in the 1970s. 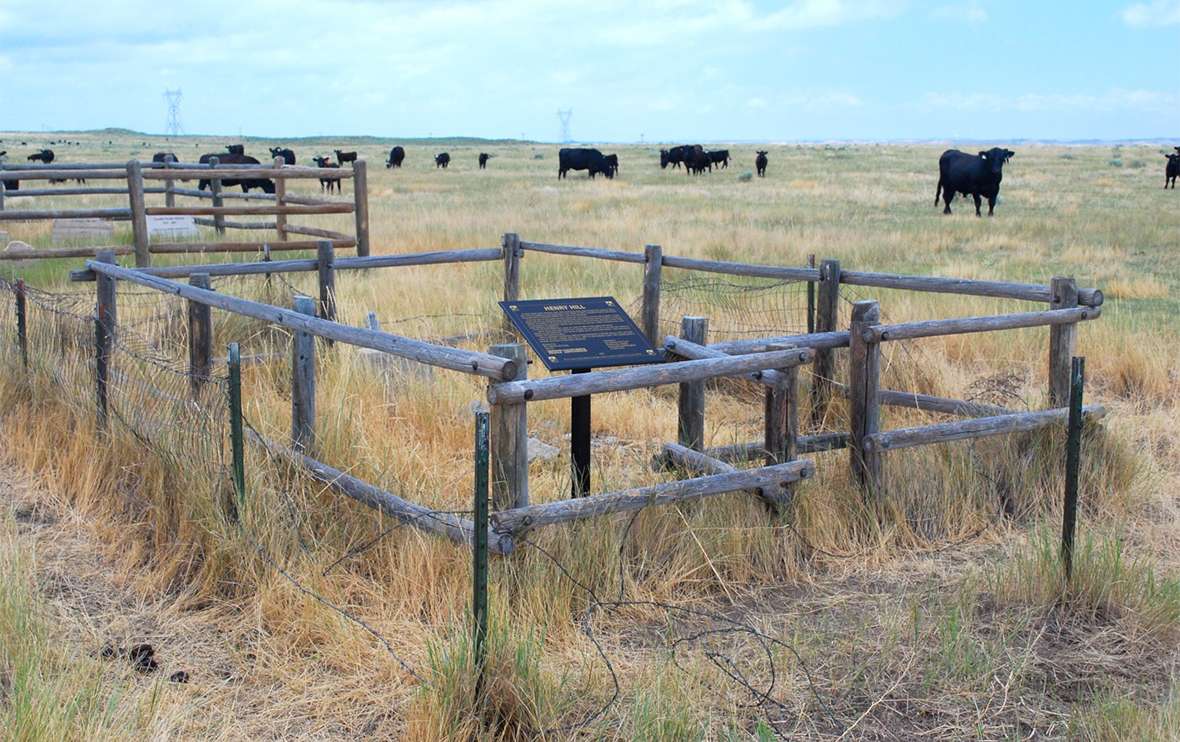 Henry Hill of Monroe County, Mo., age 59 died in what is now Goshen County, Wyo., probably of cholera, while traveling on the Oregon Trail.

The Death of Charles Bishop
The Grave of Mary Homsley
Fort Laramie
Making a Home in Empire, Wyo.
Goshen County, Wyoming
The Grave of William Clary
Mexican Hill, a Steep Descent on the Oregon Trail

More about Torrington at Wyoming Places