During the Indian Wars of the late1800s, two military posts were built a few miles apart near the strategic Bozeman Trail crossing of the Powder River—Fort Reno in the 1860s and Cantonment Reno in the 1870s. Informative historical markers mark the spots today, and the windswept landscape around them has changed little in the last 160 years.

In 1863, John Bozeman and others blazed The Bozeman Trail through the Powder River Basin across prized hunting lands of the Cheyenne, Lakota Sioux and Arapaho Indian tribes to the gold fields of Montana Territory

After troops massacred 150 Cheyenne and Arapaho people late in 1864 on Sand Creek in southeastern Colorado Territory, the survivors fled north 500 miles or more to the buffalo country in the Powder River Basin of present northeastern Wyoming, attacking settlements and Army posts along the way. 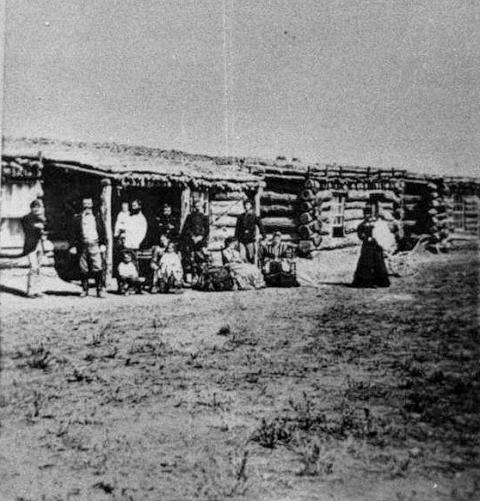 These events set the stage for a large, three-pronged expedition into the basin under Brig. Gen. Patrick E. Connor in the summer of 1865. His troops built Fort Connor at the Bozeman Trail crossing of the Powder River. Despite their attack on an Arapaho village near present-day Ranchester, Wyo., the expedition was largely unsuccessful, and the name of the fort was soon changed to Fort Reno.

Tensions continued. In 1866, Col. Henry B. Carrington and 700 troops were ordered to build more forts and protect the trail. Under the leadership of Oglala Sioux Chief Red Cloud, the tribes resisted, attacking troops and Bozeman Trail travelers in what came to be known as Red Cloud’s War.

Indians never attacked Fort Reno. It was abandoned under the terms of the 1868 Fort Laramie treaty, and the tribes burned it. Only shallow depressions in the ground remain today.

Cantonment Reno was a supply base established by Gen. George Crook in 1876, the year he led three different expeditions into the Powder River Basin as part of the Army’s attempts to force remaining free-roaming Sioux and Cheyenne bands onto reservations. In September, Crook established Cantonment Reno, a supply base about four miles south and upriver from the site of the old Fort Reno. From here, troops attacked a Cheyenne village under the ledership of Dull Knife on the headwaters of Powder River, destroying most of the Indians’ possessions and driving them off into the mountains and winter snows.

In that fight, Lt. John A. McKinney was killed. During this engagement, Cantonment Reno provided logistical support for the army as well as rudimentary care for those wounded in battle.

Shortly thereafter, Cantonment Reno was renamed Fort McKinney in honor of the fallen officer. By 1878, the simple outpost on the west bank of the Powder River lacked adequate supplies of lumber and water and was relocated to the Clear Fork of the Powder River near present-day Buffalo, Wyo. Shallow depressions remain in the earth where buildings once stood—the only vestiges of this former post—and serve as reminders of turbulent times on the Northern Plains a century and a half ago.

Cantonment Reno established on the banks of Powder River near the Bozeman Trail crossing, three miles from the abandoned Fort Reno.

Visiting Fort Reno and Cantonment Reno, Outposts on the on the Bozeman Trail