The 1860s brought new attention from both whites and Indians to the northeast corner of what soon would become Wyoming Territory. First, a gold frenzy in Montana Territory drew miners north from the emigrant road that followed the North Platte River. Mountain man Jim Bridger warned against establishing a trail through the Arapaho and Lakota hunting grounds, urging that another path west of the Bighorns be used instead. But the Powder River Basin route was the most direct and, in 1863, John Bozeman, following ancient routes long used by Indians, blazed the Bozeman Trail through the middle of the basin. 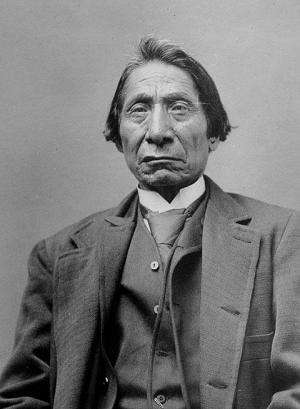 Meanwhile in 1864, Col. John M. Chivington led a detachment of Colorado volunteer troops that massacred about 150 Cheyenne and Arapaho men, women and children at a peaceful camp on Sand Creek near the Arkansas River in southeastern Colorado Territory. The furious survivors fled north to the Powder River country and Black Hills, attacking white settlements and army posts along the way. Early in 1865, bands of the Cheyenne, Oglala Lakota and Arapaho tribes set up huge camps on the Tongue and Powder rivers in northern Wyoming. That summer, thousands of warriors moved south and on July 26, 1865 attacked Platte Bridge Station, an army post where the emigrant road crossed the North Platte, and killed 26 men. Among them were Lt. Caspar W. Collins, for whom the city of Casper, Wyo., is named.

In hopes of protecting the Bozeman Trail, the U.S. military launched the 1865 Powder River Expedition, under District of the Plains Commander Brig. Gen. Patrick Connor, to subdue the aggressive Indian forces in the Powder River country. Three disorganized columns of troops marched north: one, accompanied by Connor, followed the Bozeman Trail, built Fort Connor on the Powder River east of present-day Kaycee, Wyo., and ambushed an Arapaho village on the Tongue River near present-day Ranchester, Wyo.

Connor’s party also had to rescue the Sawyers Expedition, attacked by those same Arapahos while trying to survey the trail to the Montana Territory gold fields. A second column, led by Col. Samuel Walker, made its way east of the Powder River toward Montana, and the third, led by Col. Nelson Cole, crossed Nebraska Territory and met up with Walker north of the Black Hills. Walker’s and Cole’s men suffered from terrible weather, dying animals, confusion in the badlands and demoralization, and limped into Fort Connor as “the sorriest army ever seen in Wyoming,” according to historian T. A. Larson.

In 1866, the U. S. Interior Department called upon thousands of Brulé and Oglala Lakota to meet at Fort Laramie for a treaty that would allow settlers and speculators safe passage on the Bozeman Trail. At the same time, the U. S. War Department sent Col. Henry B. Carrington into the Powder River Basin at the head of 700 troops. This move angered the Oglala leader Red Cloud, who refused to sign the treaty and instead, Oglala Lakota warriors with their Cheyenne and Arapaho allies in the Powder River country, launched what became known as Red Cloud’s War. 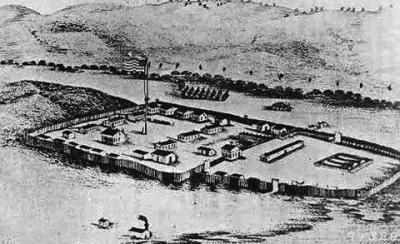 In December, a band of Oglala and Minniconjou Lakota warriors led by Red Cloud, Crazy Horse and High-Back-Bone lured Captain W. J. Fetterman over a rise near Fort Phil Kearny and into a trap. Within half an hour, Fetterman and all 80 of his men were dead. Their bodies were stripped, scalped and mutilated by the Indians.

The survivors at the fort feared another attack and a civilian scout, “Portugee” John Phillips, agreed to ride for help. Accompanied at times by various other riders, he traveled at night and reached Fort Laramie, 236 miles away, just four days later, on Christmas. It took a relief force until mid January to make its way to Fort Phil Kearny. Col. Carrington was blamed for the massacre and relieved of his command, although court hearings determined Capt. Fetterman had disobeyed Carrington’s orders and was at fault.

The Army the following spring began planning a large expedition into the Powder River country to whip the Lakota into submission. But Grenville Dodge, chief engineer of the Union Pacific Railroad, then building westward out of Nebraska toward Cheyenne, feared an expedition north would leave the railroad vulnerable to Indian attack. The U.P. reached what’s now southwest Wyoming by the end of 1868. While four military forts protected the railroad during construction, their purpose was as much to instill order into the railroad workers as to protect them from Indian attacks, infrequent along that route after 1866.

In the summer of 1867, meanwhile, Red Cloud, Crazy Horse and High-Back-Bone led another attack near Fort Phil Kearny. This time, they ambushed a woodcutting party and its military escort about five miles from the fort. This fight turned out much differently than the Fetterman Massacre. Thirty-two men lifted the boxes from 14 wagons and arranged them into a makeshift corral. From this fortification, they fired new Springfield-Allen breech-loading rifles, much faster to reload than any guns the Indians had previously encountered. By the end of the day, only four members of the woodcutting party had been killed. Indians counted their own dead at six; white estimates of Indian deaths in the fight ranged from 60 to 1,500.

After these battles and several smaller attacks, there was another treaty meeting at Fort Laramie. The 1868 treaty granted the land north of the Platte River from the Bighorns to South Dakota Territory to the Indians. Troops pulled out of Fort Phil Kearny and while they marched away, smoke billowed up behind them as Cheyenne warriors burned it to the ground, marking the end of Red Cloud’s War.

Emilene Ostlind is a third generation Wyomingite from Big Horn. She holds a master’s degree in creative nonfiction writing and environment and natural resources from the University of Wyoming and enjoys writing about landscapes, resources and communities in the West. She is public relations coordinator at UW’s Environment and Natural Resources Program. Visit her website at emileneostlind.com.

Fort Phil Kearny is located 20 miles south of Sheridan. From Interstate 90, take Exit 44 and follow signs. The fort is about two miles northwest of the exit.

Admission prices, other fees and hours of operation are available at https://www.fortphilkearny.com. For more information, call the Fort Phil Kearny office, (307) 684-7629.