More than seventy years of action and organizing in the women’s-rights movement in the United States came to a head on June 4, 1919, when Congress passed the 19th Amendment to the U.S. Constitution, granting all female citizens the right to vote. 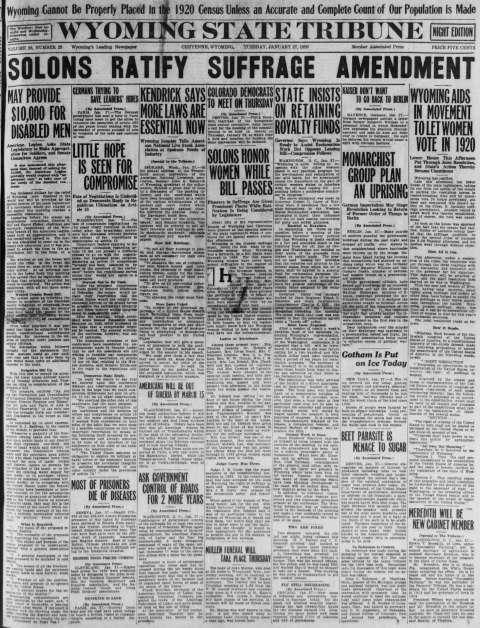 Before the amendment could become law, however, the legislatures of 36 of the 48 states—that is, three-fourths of them—would have to ratify it. In Wyoming, women soon began organizing for a final push.

The evolution of women’s suffrage

New Jersey’s first state constitution, passed during the Revolutionary War, had allowed single women to vote if they also owned property; their right was taken away in 1807. By the 1840s, women were becoming more active in the abolitionist movement against slavery, and many of these also began writing and calling for political and property rights for women. Historians generally date the beginning of the modern women’s suffrage movement to July 19 and 20, 1848, when the Women’s Rights Convention was held at the Wesleyan Chapel in Seneca Falls, N.Y.

Twenty-one more years would pass before the legislature of the new territory of Wyoming passed the first law granting women an unrestricted right to vote. Wyoming women not only voted, but began, briefly, to serve on juries. In 1870, South Pass City resident Esther Hobart Morris was appointed justice of the peace and thus became the first woman in the nation to hold public office.

Twenty years after that, there was significant opposition in the U.S. House of Representatives to Wyoming’s becoming a state if its women were to continue to be allowed to vote. But that opposition was overcome, Wyoming was admitted and in 1892 Wyoming’s women became the first to vote in a U.S. presidential election. In the 1890s, women also won the right to vote in Colorado, Utah and Idaho. In 1920, the voters in Jackson, Wyo. elected an all-female town council.

Meanwhile, the women’s suffrage movement was steadily gaining momentum in the United States and worldwide. By 1919, 21 nations and 17 of the 48 U.S. states had enfranchised their female citizens. 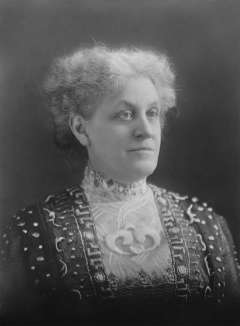 Prohibition and the WCTU

Just as there had been broad overlap before the Civil War among women supporting the abolition of slavery and those supporting women’s rights, so by the late 1800s there was broad overlap among women’s rights and temperance supporters. The National Prohibition Party and the Woman’s Christian Temperance Union were founded in 1869 and 1874 respectively. The Prohibition Party nominated presidential candidates starting in its first year and by 1888 was winning more than 200,000 votes nationwide. In 1917, Congress sent the 18th Amendment to the Constitution to the states for ratification. The amendment banned the "manufacture, sale, and transportation of intoxicating liquors."

The WCTU grew in tandem, mushrooming from 22,000 members in 1881 to more than 245,000 in 1911. By 1917 there were half a million members. Although temperance was the WCTU's primary mission, women’s suffrage became a major goal as well, as women trying to abolish alcohol consumption discovered the limits of their influence without the vote. The temperance movement succeeded; the 18th amendment became law on Jan. 16, 1919.

Activities of Wyoming women before the 19th amendment

As early as 1885, Wyoming’s WCTU boasted at least four chapters, or unions, as local chapters were called. The 1912 Report of the Twenty-Ninth Annual Convention of the Woman's Christian Temperance Union of Wyoming lists 38 unions around the state, with a total of 380 members. State and national officers visited local unions, and members of all local unions delivered public lectures and speeches, visited schools, held parlor meetings and children's meetings, visited prisons and held institutes—educational meetings for members and for outreach.

The National Council of Woman Voters, largely a regional organization at the time, held its third convention in Cheyenne, Wyo., on July 26-29, 1916. About 25 Wyoming women attended, including Mary G. Bellamy, Wyoming’s first woman legislator and women’s rights activist and University of Wyoming Professor Grace Raymond Hebard, along with 16 delegates from other states. Business included election of officers, reading reports and greetings from out-of-state chapters and voting to affiliate with the National American Woman’s Suffrage Association. The NAWSA later became the League of Women Voters. 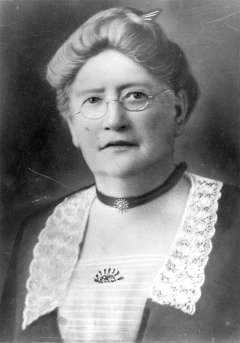 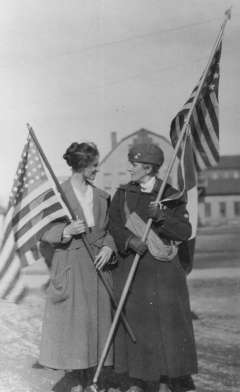 Agnes Wright reported in the July 28, 1916 edition of the Cheyenne-based Wyoming State Tribune that both the council and the NAWSA “are absolutely opposed to militant methods and desire and thoroughly believe that they may win their object by educational methods instead of the hatchet. They are opposed to the Congressional Union and all similar organizations.”

The radical Congressional Union, led by Alice Paul, was expelled from the NAWSA in 1914. The "defiant, aggressive" Union advocated opposing the party in power if it did not act on women's suffrage, publicly criticized President Woodrow Wilson—including interrupting his speeches to ask “pointed questions” about suffrage—and lobbied primarily for a federal suffrage amendment, as opposed to the state-by-state tactics the NAWSA had followed up to that point.

Late in 1919, five months after Congress passed the 19th Amendment, Wyoming suffragists formed a 26-person Ratification Committee, headed by Hebard, the UW professor. Nationally prominent suffragist Carrie Chapman Catt, then president of the NAWSA, met with the committee in Laramie, Wyo., on Nov. 11, 1919.

Also on the committee was well-known Wyoming temperance and suffragist orator Theresa Jenkins. Earlier that year, Catt had met with Jenkins at the annual NAWSA convention, and had asked her to ask Gov. Carey to call a special session of the Wyoming Legislature. Carey’s response was personal: “Mrs. Jenkins, if for no other reason than that you have asked me to do this I would call this session, for I know that if you did not think it the right thing for me to do you would not have asked it."

The next day, Nov. 12, the Laramie Republican printed the Ratification Committee's resolution, including: “[W]e the citizens of Wyoming … do urgently request his excellency, the governor of Wyoming, Robert D. Carey, to call a special session of the state legislature … to take measures to ratify the suffrage amendment.”

Carey called the session; the legislature met from Jan. 26-28, 1920. On the first day, Gov. Carey addressed a joint session of the two houses, reported by The Sheridan Enterprise on January 26. Twenty-four of the 27 members of the Senate attended, and 46 of the 54 House members.

“Recently it has become apparent,” Carey noted, that “in order to obtain the requisite number of states [to ratify the 19th amendment] that action on the part of this state may be absolutely necessary. Further, the opponents of suffrage have been using as an argument against granting equal rights to women that Wyoming had not [yet] ratified [the Constitutional amendment] for the reason that suffrage had proved a failure in this state. … [W]e could not allow such a charge to be unchallenged.”

On January 26, the Wyoming Senate voted unanimously to ratify. The House followed suit January 27, making Wyoming the 27th of the 36 needed to make the 19th Amendment law. Gov. Carey signed the resolution January 28. On January 29, the Wyoming State Tribune reported that Carrie Chapman Catt telegraphed Carey, “On behalf of the National American Woman’s Suffrage association allow me to thank you for the special session and the legislature for its unanimous vote on ratification.”

On January 27, meanwhile, the Tribune named 11 women who attended the legislative sessions, among them Theresa Jenkins, Grace Raymond Hebard and Mrs. P. Emerson Glafcke, Wyoming state chair of the National Women’s Party. A small committee of legislators escorted Jenkins and Hebard to places of honor on the floor of the House, in recognition of their suffrage work. 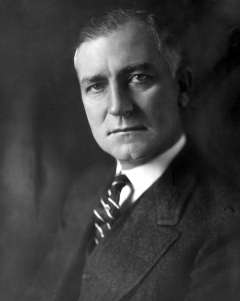 The next day, the Tribune wrote, “Representative Sackett of Sheridan said the participation of women in the politics of this state had added greatly to the purity of that politics, and his colleague, Dr. Kendall, said there never was any reason why the intelligent women of America should not have the vote.”

But Wyoming voters at the time were still reluctant to elect women to the legislature, or perhaps women were reluctant to run.

On Aug. 26, 1920, Tennessee became the 36th state to ratify the 19th Amendment. Thus, after almost three-quarters of a century of hard work and political action from protest marches in Washington, D.C. to a massive public education campaign, every female citizen in America had the right to vote.

Wyoming Legislature ratifies the 19th Amendment to the U.S. Constitution