On Jan. 24, 1973, when the Wyoming Senate voted to ratify the Equal Rights Amendment, supporters in the gallery cheered and rushed out to crown the nearby statue of Esther Hobart Morris with a garland of gold carnations. Only a day earlier, however, the outcome was deeply uncertain, despite Wyoming’s past record as the Equality State. 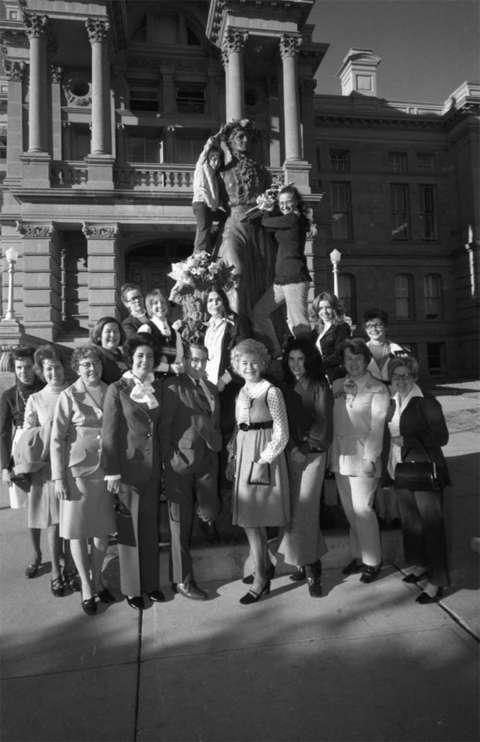 Reporting on the issue in the Casper Star-Tribune and other public discussion around the state had been intense at least since December 1972, with news stories, editorials and letters to the editor detailing the struggles and positions of ERA supporters and opponents alike.

The amendment, passed by Congress in March 1972, stated, “Equality of rights under the law shall not be denied or abridged by the United States or by any State on account of sex.” It inspired some to visions of equal pay for equal work, more freedom for both sexes to pursue their goals and a generally more progressive society. But others feared the ERA would threaten their families, weaken alimony and child support laws and level the sexes, thereby demeaning women.

The battle in Wyoming

Shortly after the November 1972 election, two rival organizations formed: the Equal Rights Amendment Coalition, and Women for Maintaining the Difference Between the Sexes and Against the ERA. The former, composed of at least seven Wyoming organizations, focused mostly on lobbying; the latter on circulating petitions and writing letters to legislators.

On Dec. 2, 1972, the Casper Star-Tribune published a letter to the editor by Casper, Wyo., resident Patricia Robison, who wrote that the ERA would “jeopardize my privileges, my protection, and my privacy. Those who believe the ERA is simply extending opportunities to women are sadly misled.”

Also early in December, the coalition polled all legislators on the ERA, as reported in the Jan. 1, 1973, Casper Star-Tribune. Although the poll revealed strong support in the House of Representatives, many senators were undecided or did not respond. 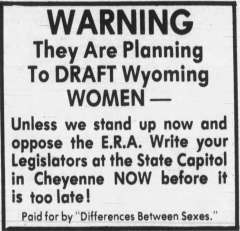 On Jan. 9, 1973, the Casper branch of the American Association of University Women held a public meeting in support of the ERA, with Mako Miller and Marjorie Carriger speaking, both in favor. The audience was a mixture of supporters and members of the opposition, including the co-chairwomen of Women for Maintaining the Difference Between the Sexes, Joanne Holbrook and Virginia Bumgardner.

In a “heated discussion” following the presentation, a teenage girl who opposed the amendment “brought up the subject of 18-year-old girls being drafted,” reported the Jan. 14 Star-Tribune. “Both … [presenters] told her that the volunteer army would take care of the draft question but agreed there would be no guarantee that women would not be drafted in the future.”

The next day, Gov. Stan Hathaway delivered his state of the state speech to the opening session of the 42nd Legislature. Having already promised his support of the ERA months previously, Hathaway added in his speech, “If Wyoming does not ratify the [Equal Rights] Amendment, we will no longer be called the Equality State.” Hathaway and Thompson were both Republicans.

Also on the 10th, the Star-Tribune published a letter by Georgina Guy of the University of Wyoming’s Women Law Students Association. Guy listed, and refuted, what she said were common misconceptions on a variety of issues: “[R]ape (there will be no change in the law), alimony (this will continue, based on need in each case), child support (fathers will still be obligated to support their children) and the right to privacy (this will not be affected).” 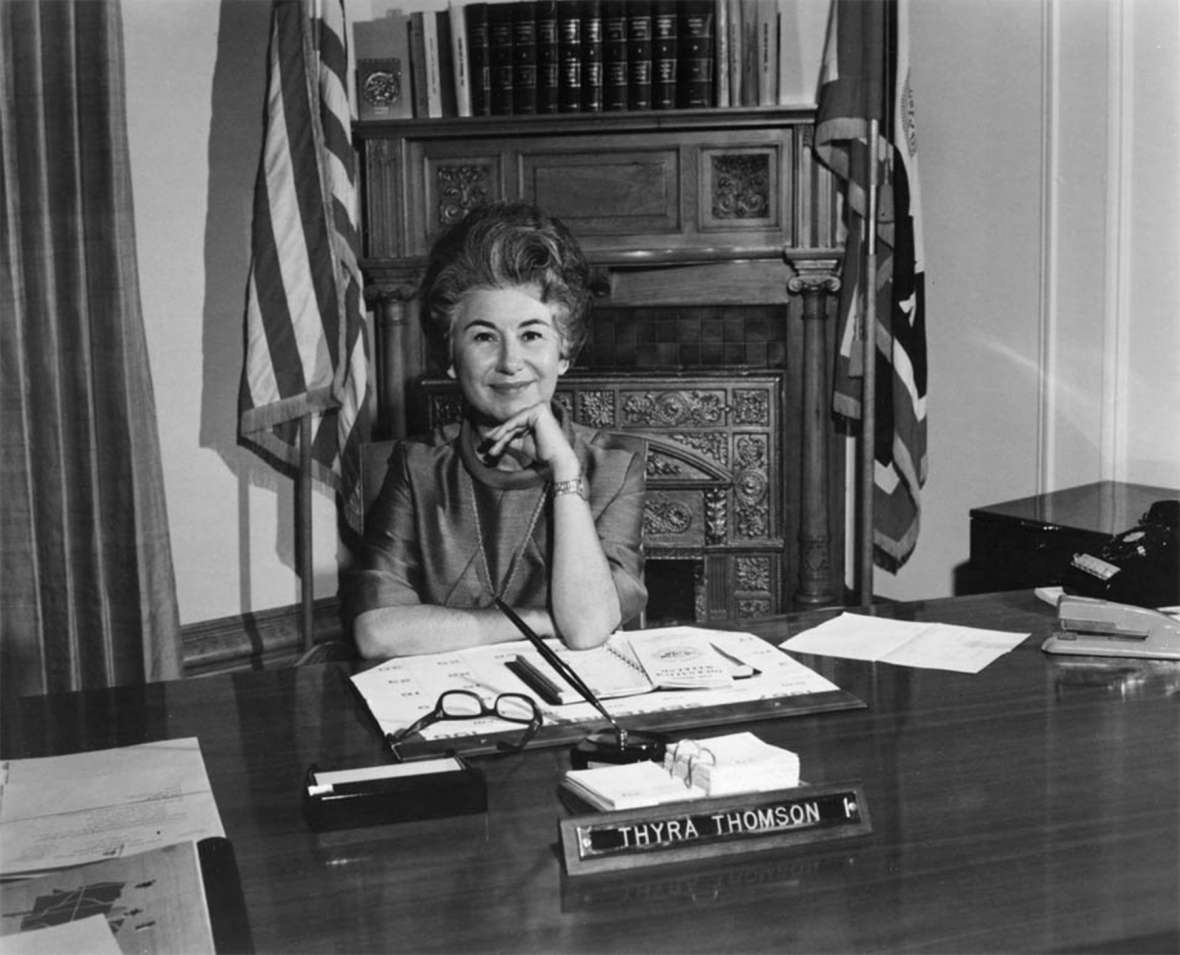 The House of Representatives voted 40 to 21 for ratification on Jan. 16, with one member absent. This was no surprise; the real battle was forthcoming in the Senate, with a vote scheduled there on Jan. 24. Meanwhile, arguments in letters to the editor continued on both sides.

In a Jan. 17 press conference, Hathaway mentioned “mail he has received from groups opposing the ERA. … ‘I suspect the John Birch Society is generating some of the mail,’” he said. On Jan. 23, the Star-Tribune reported that Joanne Holbrook sent a petition with 2800 signatures to Sheridan County Sen. Pete Madsen, an ERA opposer.

Suspense continued right up to the day the Senate voted. Before the vote, the Jan. 24, 1973, Star-Tribune reported, “Advocates of the ERA can only count 15 votes for the bill, which needs 16 to pass.” Later that day, the Senate voted 17-12 in favor, making Wyoming the 23rd state to ratify the amendment.

Roll calls published in the Star-Tribune after the votes allow an interesting look at Wyoming politics in 1973. The ERA won strong support from legislators in both parties. Though the Legislature at the time, with 61 Republicans, 30 Democrats and one Independent, was much more evenly divided between the parties than it is now in 2019, the ERA’s opponents were overwhelmingly Republican. In the House, one Independent and only one Democrat were among the 21 no votes; in the Senate, only two of the 12 no votes were from Democrats.

Among Wyoming politicians who later rose to leadership and prominence, future U.S. senators Al Simpson, at the time a representative from Park County, and Malcolm Wallop, at the time a senator from Sheridan County, both Republicans, voted no. Future Wyoming speakers of the House Rory Cross of Converse County and Russ Donley of Natrona County and future Wyoming Senate President Diemer True, all Republicans, voted no as well.

On Jan. 28, the Star-Tribune published its second editorial supporting the ERA, noting, “It all goes back to the role of pioneer women in the West. They carried their weight equally with men in enduring the hardships and facing the dangers of the frontier, in carving out the homesteads and earning a living.” 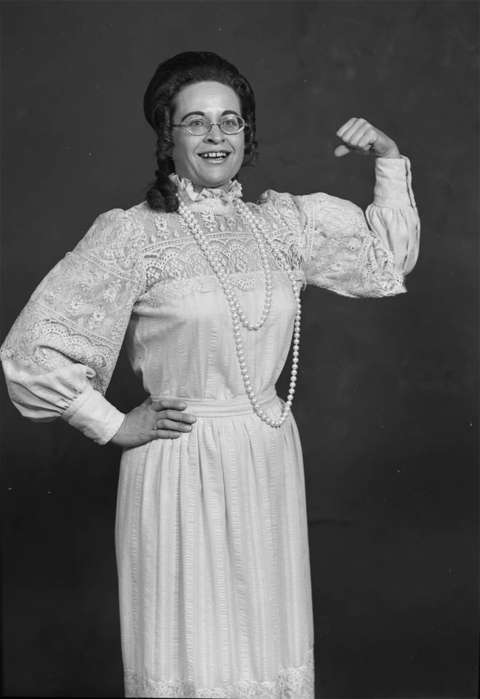 Longtime journalist Joan Barron, Capital Bureau Chief for the Star-Tribune at the time, now recalls, “Sen[ator] Earl Christensen of Newcastle … told me that I would be able to use the men’s bathroom if the bill passed. The opposed senators also circulated cartoons to that effect. That was the overall attitude at the time.” Barron continues, “The bill passed largely because of a strong lobbying effort by my fellow members of the Wyoming Press Women chapter … and other women.”

Historian Larson wrote a summary of the battle, published in the Feb. 18, 1973, Star-Tribune. Larson credited Julia Yelvington and Selia Riberio, co-chairwomen of the ERA Coalition, plus other members of the coalition, with effective lobbying, letter-writing and speaking in support of the Amendment.

The fate of the ERA

By 1977, 35 of the needed 38 states had ratified, and both major political parties, both houses of Congress, and Presidents Nixon, Ford and Carter had supported the ERA. Then, conservative Phyllis Schlafly, a constitutional lawyer, mobilized the opposition. Five state legislatures voted to rescind their ratifications, but it is unclear whether the law validates these actions.

Alice Paul, a prominent early suffragist, wrote the first version of the ERA in 1923; it was introduced in Congress the same year. The Alice Paul Institute, founded to honor Paul and continue her work, provides current information on the status of ratification efforts, including various bills pending in Congress. The map on the Institute’s home web page shows that 37 states have ratified the Amendment.

With the Democratic Party’s gaining control of the Virginia Legislature in November 2019, that state may well in 2020 become the 38th to ratify the ERA. If that happened, questions of the legality of the earlier deadlines and of five states’ earlier votes to rescind their ratifications would probably end up in the courts.