Women's Suffrage in the Wyoming Constitution

Women's Suffrage in the Wyoming Constitution

In September 1889, delegates from across Wyoming Territory gathered in Cheyenne to draft a state constitution. Article VI, Section 1 reads 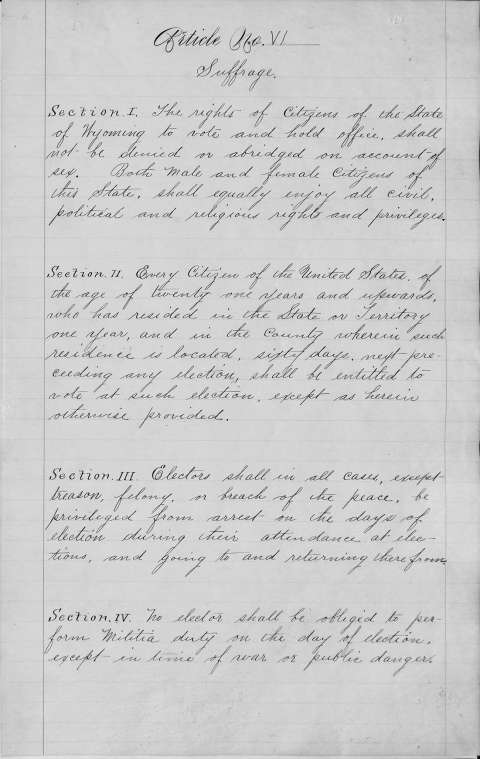 During the Constitutional Convention, however, the delegates discussed the question of women’s suffrage at length. With votes for women established in the territory for 20 years by this time, the delegates—all of them male—were wary of opposing the idea. Still, some proposed that the question should be put directly to the people in a separate vote. If it passed, as they said they were confident it would, that would only strengthen the example Wyoming was setting to the nation and the world, they argued.

Further, the Laramie Daily Boomerang noted, inclusion of votes for women in the new constitution could hurt Wyoming when the question of admission to statehood came before Congress:

It is not at all certain that Congress would approve a state constitution making provision for woman suffrage and there is no reason in declaring that Wyoming should stay out of the Union until Congress may be willing to ratify such a constitution. . . . No other state has equal suffrage and they have grown and prospered and been successfully governed and a majority in Congress might say that so long as women do not vote in the older states there is no reason why suffrage should be conferred upon them in any of the new states. [1]

When Congress brought up the question the following spring, however, it turned out the Boomerang had not been so far off. There was substantial opposition, especially in the U.S. House of Representatives, to admitting a state whose women could vote. Congress finally passed the measure, however, with a close vote of 139-127 in the House and more comfortable 29-18 in the Senate. President Benjamin Harrison signed the statehood bill on July 10, 1890, admitting Wyoming as the 44th state and the first to guarantee universal suffrage. And in 1892, the women of Wyoming became the first to vote for president during a general election.

The image of the handwritten Article 6 of the Wyoming Constitution is from Wyoming State Archives. Used with thanks.