“Barthold’s Statue of Liberty enlightening the world is fashioned in the form of a woman and placed upon a pedestal carved from the everlasting granite of the New England hills, but the women of Wyoming have been placed upon a firmer foundation and hold a more brilliant torch.”

Theresa Alberta Parkinson was born in Madison, Wisconsin on May 1, 1853. In December 1877, she left a teaching job to travel to Cheyenne, Wyoming’s territorial capital, to marry James F. Jenkins. Family records show that she was appalled at the number of saloons and dance halls in the city. She “immediately became interested in anything of civic welfare, education, and social environment for the betterment of women and children,” her daughter Agnes Wyoming Jenkins, wrote years later, “and became an ardent Temperance Worker and advocate for Woman's Suffrage.” 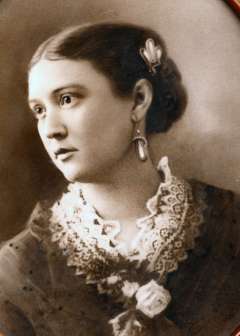 Her passions placed her at the center of two of the most powerful reforms moving through American politics at the time—votes for women and temperance. Organized, educated women like Theresa Jenkins were crucial to both movements. Both would reach nationwide success at very nearly the same time: The 18th amendment to the U.S. Constitution, prohibiting the production, sale and transport of alcohol was ratified in 1919, and the 19th amendment, guaranteeing votes for women, was ratified in 1920. Jenkins was active and effective in both the suffrage and the temperance movements for more than 30 years.

Theresa Jenkins, like other women who flocked to Wyoming Territory, took advantage of the opportunities of the Suffrage Act of 1869. Desiring to bring some refinement to the West, she became active in the First Presbyterian Church and helped to organize and fund a reading room for young people as an alternative to saloons. In 1883 Mrs. Jenkins helped organize the Woman’s Relief Corps, an auxiliary to the Grand Army of the Republic, the Union Army veterans’ group.

As well, she became a charter member of the Women’s Christian Temperance Union, delivering the first speech on prohibition in the territory and securing the introduction and passage of a law requiring public schools to teach about the harmful effects of alcohol and narcotics.

In the early years of Wyoming Territory women joined groups like the W.R.C. and W.C.T.U. to secure the more conservative values. Territorial voters elected a legislature entirely of Democrats in 1869; beginning in 1871, women like Jenkins and others helped elect Republicans, and the legislature became gradually more Republican in succeeding years. 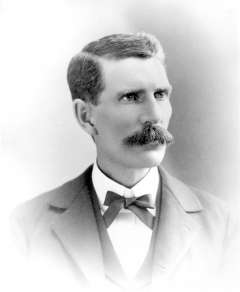 In 1889 Theresa Jenkins and other women worked hard to elect delegates to the state constitutional convention who were open to women’s suffrage. Their work sparked the criticism of Professor Edward Drinker Cope of Philadelphia, a dinosaur-hunting paleontologist and one of the best-known scientists of the day. In an article on “The Relation of the Sexes to the Government” in the October 1888 Popular Science Monthly, Cope claimed that “being free from the disabilities imposed by maternity, the male could acquire a greater mastery over his environment than the female,” and that “women would be irresponsible voters, as they can not assist in the execution of the laws that they help make.”

Jenkins was so outraged with Prof. Cope’s article that she submitted a rebuttal, "The Mental Force of Woman,” published the following spring. She wrote,

I wish that women everywhere would study the one argument that can be brought against woman suffrage. It is this: Woman may reform man. He has shown us clearly that he will not reform himself. . . . But woman in asking for the ballot ought to say to man[:] We will make better use of it than you have. This is the ground on which we must demand the suffrage. Not the use of the ballot simply to make our own importance greater, but the ballot as it could be used to raise politics out of its filthiness, corruption, and ignorance, and to bring in the reign of purity, patriotism, and intelligence.

Sentiments like Cope’s had some inhabitants of Wyoming Territory worried that Congress would not accept Wyoming's constitution with its suffrage clause. On the morning of Sept. 25, 1889, a resolution was introduced at the statehood convention in Cheyenne to remove that clause from the drafted constitution so that women, once Wyoming became a state, would lose their right to vote, a right they had enjoyed for the last twenty years. 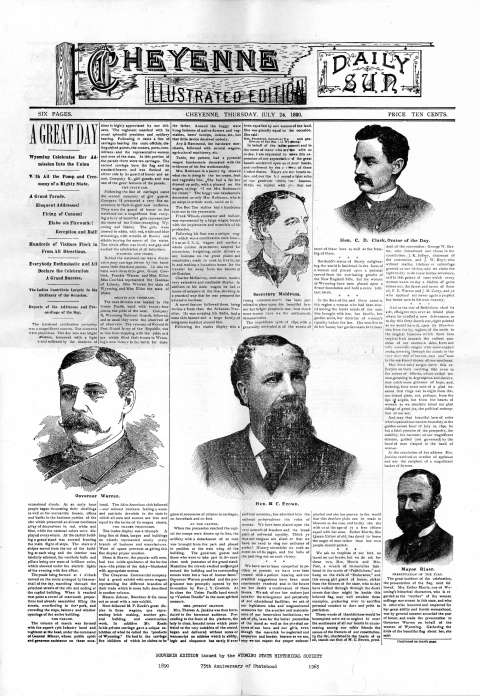 As Jenkins’s daughter, Agnes W. Jenkins Metcalf, told the story years later, “Mr. W. E. Chaplin, who was the delegate from Laramie and a great newspaperman, came into my father's shoe store and told him that there had been a resolution introduced that morning to take that clause out of the drafted constitution so that women would lose their right to vote. And knowing how much both my father and mother were interested in suffrage, [Chaplin] thought she should know. So Dad went home for his noon meal and told my mother, and he hitched up the horse and buggy and she made a door-to-door canvass of all of the prominent women of town to get down to that meeting that afternoon and use their influence to not let that resolution pass—not giving the women the right to vote. So they all went, and the man who had introduced the resolution withdrew it because he didn't want to face the opposition of all of the ladies of the town."

Theresa Jenkins had rallied the women together at the capital to stand for unity, to petition to retain what had been granted to them in 1869. Unfortunately she did not make it to the meeting, however. Apparently the buggy ride sent her into labor with her third child, a baby girl whom she named Agnes Wyoming Jenkins.

Despite some strong opposition in the U.S. House of Representatives, Congress passed the bill making Wyoming a state the following spring. President Benjamin Harrison signed the bill on July 10, 1890. Because of her work to save woman's suffrage for the new state, officials invited Jenkins to deliver the keynote address at the statehood celebration July 23. She wrote out her speech, memorized it and practiced on the outskirts of town for volume and diction. James Jenkins, with baby Agnes, would move their buggy farther and farther away, signaling when she could be heard and understood.

The day after her speech, the Cheyenne Daily Sun reported,"Theresa A. Jenkins was then introduced to the immense audience. Proceeding to the front of the platform, the lady in clear, forceful tones which penetrated to the very outskirts of the crowd, began and delivered without notes or manuscript an address which in ability, logic and eloquence has rarely if ever been equalled by any woman of the land. She was grandly equal to the occasion."

The Wyoming Commonwealth described Mrs. Jenkins as “a fair representative woman of Wyoming, modest, yet brilliant, educated and eloquent and withal a lover of home, which she labors to make the dearest spot on earth. … She is in no sense a reformer, only an earnest, well meaning woman laboring to make woman less dependent and more use in this busy world.” 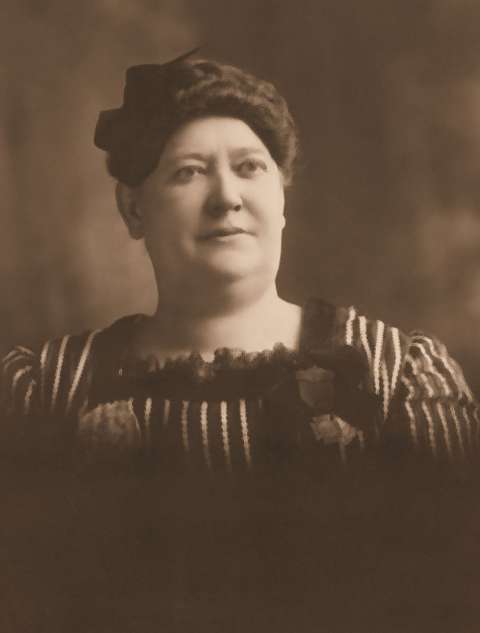 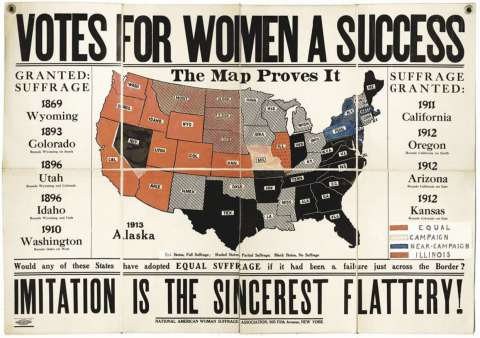 An 1893 collection of biographical sketches, A Woman of the Century, echoed this: "She is a thoroughly educated woman, and her writings are clear and forcible. Since 1887 she has labored to secure equal rights and justice for all citizens. She was one of the orators of the day when Wyoming’s admission to statehood was celebrated and her address on that occasion was powerful and brilliant.”

Theresa Jenkins traveled throughout the West speaking on Wyoming’s stand for women’s suffrage. Many referred to her as a “champion of women’s rights.” In 1892 she was elected to attend the Republican National Convention in Minneapolis, the first woman in nation to be so honored. In 1893 she spoke in Denver and in practically every town in Colorado in a statewide campaign for a referendum on women’s suffrage. That year, Colorado became the second state in the nation to grant women the right to vote.

The more she traveled, the more in demand she became. She met with famous suffragists as she worked to help other states pass their own equality laws. In 1911, Jenkins was made national superintendent of franchise in the W.C.T.U., and attended the World's W.C.T.U. Convention in Boston. She spoke in 12 states for suffrage and prohibition.

In 1919, when Jenkins attended the convention of the National American Woman’s Suffrage Association, Association President Carrie Chapman Catt asked her to ask Wyoming Gov. Robert Carey call a special session of the legislature to ratify the 19th Amendment to the Constitution. Congress had passed the amendment in June of that year. Before it could become law, 36 states would be needed to ratify it.

Carey replied, “Mrs. Jenkins, if for no other reason than that you have asked me to do this I would call this session, for I know that if you did not think it the right thing for me to do you would not have asked it. I am, however, very anxious to see this amendment ratified and will do all in my power to have this state one of the first to go on record along this line.” In January 1920, Wyoming became the 27th state to vote for ratification. The following August, Tennessee became the 36th.

Also that year, Jenkins was chosen to represent the Rocky Mountain region at the W.C.T.U. World's Convention in London. In an oral history about her mother’s life, Agnes W. Jenkins Metcalf reported, “One of the greatest honors conferred upon her during the latter years of her life was when she was named by Mrs. Carrie Chapman Catt, together with the name of Mrs. Esther Morris and Dr. Grace Raymond Hebard, as the three women of Wyoming who had meant more than all others for the state of Wyoming in the cause of suffrage, and these three names now appear engraved on a bronze plaque in Convention Hall, in Washington, D.C.”

Jenkins died Feb. 28, 1936 and is buried next to her husband in Lakewood Cemetery in Cheyenne. 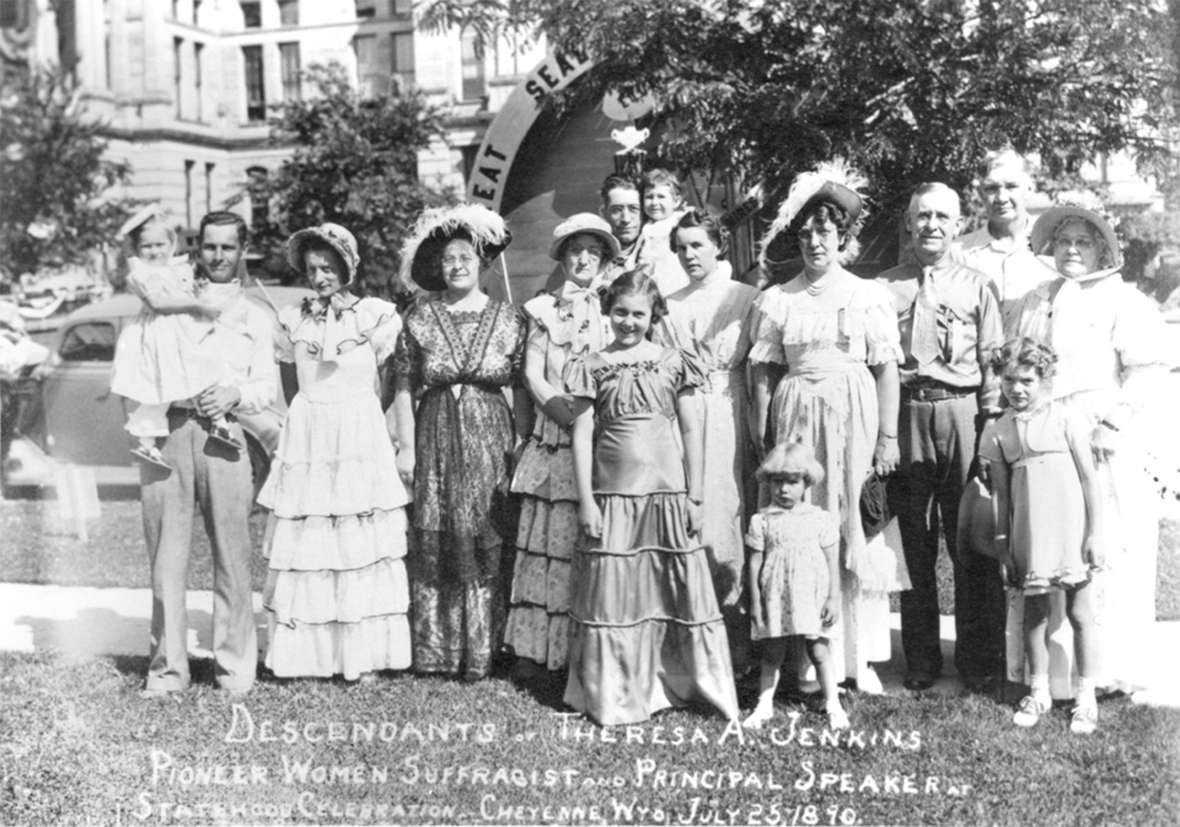 MaryJo Birt lives in Wheatland, Wyo., where she teaches middle school history and geography and has been coaching students for National History Day for more than 20 years. A family friend, Paula Qualls, "introduced" Birt to Theresa Jenkins (Qualls’s great-grandmother) and the research took over.