Sheridan, Wyoming is located at an elevation of 3,743 feet in Goose Creek Valley in the north-central part of the state. The city is in the Tongue River watershed ten miles north and east of the Big Horn Mountains, in the ancestral homeland of the Crow people. The 2000 Census counted Sheridan’s population at 15,800. 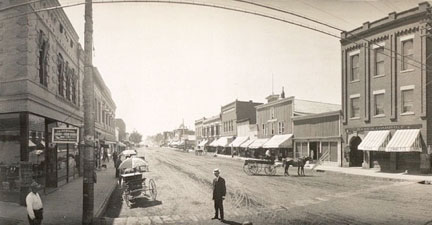 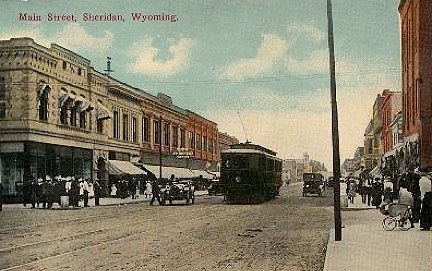 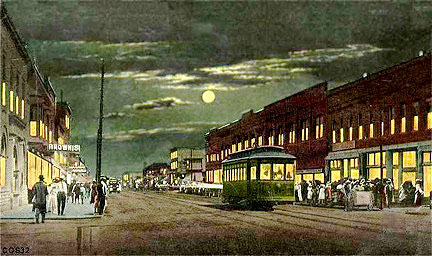 The valley served as a staging area for General Crook’s campaign against the Lakota and Cheyenne in 1876. Over the next two years the U.S. Army forced the tribes onto reservations, opening northern Wyoming to settlers. A trapper named George Mandel built a cabin and post office near the forks of Goose Creek. However, he decided not to stay.  Mandel sold his 40 acres to a Civil War veteran named John D. Loucks, who paid $50 for the claim.

One evening in the spring of 1882 John Loucks sat on a hill above Goose Creek and envisioned a town laid out in the valley below him. He went to his cabin and sketched out the town site, giving it the name “Sheridan” in honor of the Union general he had served under. Loucks then hired Jack Dow of Big Horn to survey the town, and registered the plat in the Cheyenne land office. Loucks later served as the first postmaster, and in 1884 took office as the first mayor when Sheridan formally incorporated.

In the spring of 1888, the Johnson County residents north of Piney Creek moved to reorganize their district as Sheridan County. The bill to divide Johnson County passed in the Territorial Legislature with a 14-2 vote over Governor Moonlight’s veto. In the election for county seat, Sheridan received 486 votes, Big Horn earned 248, and Dayton won 224.

The arrival of the Burlington & Missouri Railroad in 1892 sealed Sheridan’s destiny as the center for this region of Wyoming. Local farmers and merchants did so much railroad-related business in the month after the B&M arrived that they paid off $30,000 in bank loans. Coming out of the panic of 1893, coal mines opened at Dietz, Monarch, and Acme along Goose Creek and in the Tongue River Valley. This set off a 20-year boom for Sheridan. In the decade leading up to 1910, the population grew from 1,559 to 8,408.

For the first few decades Sheridan’s social life centered on the bars, pool halls and brothels around Main Street, and at the Sheridan Inn. William F. “Buffalo Bill” Cody invested in the Inn, and used it as his headquarters during tryouts for his Wild West show. Local cowboys and cowgirls joined the show and traveled to Europe, including George Gardner and his wife, Tode Bard, Jim Jennings and his wife, and Paul Case.

By the 1910s, Sheridan had the only long-distance electric trolley line in the state, and a cosmopolitan population that included African Americans, Hispanics, and many immigrants from Europe, Asia, and the Middle East. Notably, the mines attracted dozens of families from highland villages near Istebna in south-central Poland. Hoboes also frequented the town.

In the years leading up to World War I, high agricultural prices led to investment in the flour mill of Denio Milling Company, the Holly Sugar Mill, and Sheridan Brewery. In 1920, Prohibition forced the brewery to produce soda pop, but also stimulated Sheridan’s black market businesses of bootlegging, speakeasies, prostitution, and illegal gambling.

John B. Kendrick became the region’s most prominent cattle rancher, with holdings stretching from Tongue River to the Powder River. On land he bought from early Sheridan settler Andrew Nielsen, Kendrick built his 13,000-square-foot Flemish-Revival mansion “Trail End," and land donated by Kendrick and Nielsen later became Kendrick Park. A Democrat, Kendrick won election as governor in 1914 and served as U.S. Senator from 1917 until his death in 1933.

The 1930s saw efforts to promote tourism and the dude ranch business through the establishment of the airport and the Sheridan WYO Rodeo.

The community welcomed the founding of Sheridan College in 1948, just as industry began to falter. In the same year the Holly Sugar Mill stopped processing beets due to a drop in federal price supports for sugar. The Monarch mine north of Sheridan closed in 1953 because of a drop in demand for coal as locomotives shifted from steam to diesel power. Many houses from Monarch were picked up and moved into town.

The 1960s brought the end of passenger rail service, the arrival of Interstate-90, and the closure of the Sheridan Inn. Rising energy prices in the wake of the Arab Oil Crisis of 1973 helped spur the opening of new coal mines on Tongue River in Montana, bringing new energy to Sheridan’s economy. Residents moved out of town into rural subdivisions, occupying former farms that had done poorly after the closure of Sheridan Creamery and Sheridan Flouring Mills.

The 1980s saw a bitter labor strike at the Montana mines that split the community between union members and those who chose not to strike. The economy slackened through the 1980s until the 1990s brought a boom in real estate and coal-bed methane production. As the 21st century began the non-profit sector grew with strong support from local foundations.

The Trail End State Historic Site, 400 Clarendon Avenue in Sheridan, Wyo. is open daily from March 1 through mid-December. Call 307-674-4589, email trailend@state.wy.us or visit the website linked above for information on hours, tours, prices and more.

The Carriage House Theatre, on the Trail End grounds, stages a season of productions of the Sheridan Civic Theatre Guild every year. For information on shows, times and prices, call 307-672-9886, email ctg@actaccess.net or visit the websites linked above.