On the morning of Aug. 29, 1865, Brig. Gen. Patrick E. Connor led his troops out of a draw, formed a line and attacked Chief Black Bear's Arapaho village of about 500 people on the Tongue River near present-day Ranchester, Wyo., driving the warriors toward the Bighorn Mountains. After a 10-mile chase, the troopers’ horses began giving out, leaving Connor and a small group still in pursuit. 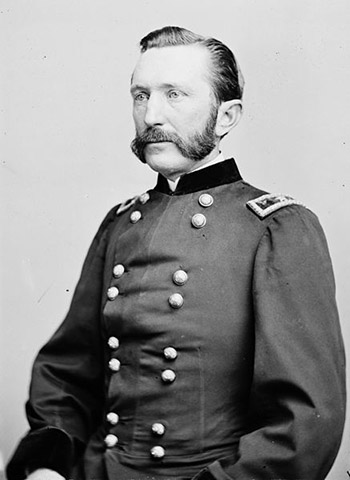 The warriors turned and drove the soldiers back to the abandoned village, keeping them under fire until after midnight. The soldiers burned most of the lodges and all the food they could find, captured a large herd of horses, and took eight women and 13 children captive. The soldiers lost eight men while the Arapaho lost 63 warriors, not counting women and children. The captives were later released.

The Tongue River battle was the only significant fight of an expedition sent to punish, at all hazards, the hostile Arapaho, Cheyenne and Lakota Sioux, and in that fashion bring about what the army saw as a satisfactory and durable peace. Though promised an additional 7,000 men, Connor was able only to put about 2500 men into the field, most of them cavalry, in three separate columns.

These columns were to rendezvous where Rosebud Creek flows into the Yellowstone River in southern Montana, and from there attack any Indians they could find. Plagued by bad planning and inadequate supplies, however, the soldiers ended up suffering months of hardship, weeks of travel on half rations and the loss of hundreds of their starving horses and mules—all at a cost of millions of dollars.

As for the Arapaho, they were never again the military power on the northern plains that they had been before Connor’s attack. The more powerful and numerous Cheyenne and Lakota Sioux remained essentially unscathed.

Though Connor’s Powder River Expedition was initially considered a success, many historians believe neither side could claim victory and some consider it a failure for the army.

Sparks in the Powder

After the outbreak of the Civil War, nearly all regular U.S. Army troops in the mountain West were pulled east. Partly to fill that vacuum, Connor, then a colonel, led a troop of California volunteers into Utah to protect the western segment of the overland trail and to keep an eye on the Mormons. In January 1863 Connor led attack on a Shoshone-Bannock village on the Bear River in present southeast Idaho, killing between 250 and 300 women, children and warriors.

After that he was promoted, and given responsibility for protecting the overland mail route through what’s now Wyoming between Salt Lake City and Fort Kearny in Nebraska Territory. Concerned that he could not gather enough troops to fulfill this duty, he requested that he be provided with two additional cavalry regiments.

The Sand Creek Massacre late in 1864 in the area that is now southeast Colorado infuriated tribes already angered by the actions of the whites. Many Southern Cheyenne warriors headed north and joined forces with the Northern Cheyenne, Lakota Sioux and Arapaho, moving through present-day eastern Colorado and western Nebraska, attacking settlements, stage stations and troops along the way. The bands continued north around the Black Hills of Dakota and into the country surrounding the Powder and Tongue rivers, where they gathered in large numbers in the winter and spring of 1865.

Out of this gathering came a force of 2,000 or more warriors, which attacked Platte Bridge Station on the upper North Platte in late July 1865, killing Lt. Caspar Collins and 27 other soldiers. 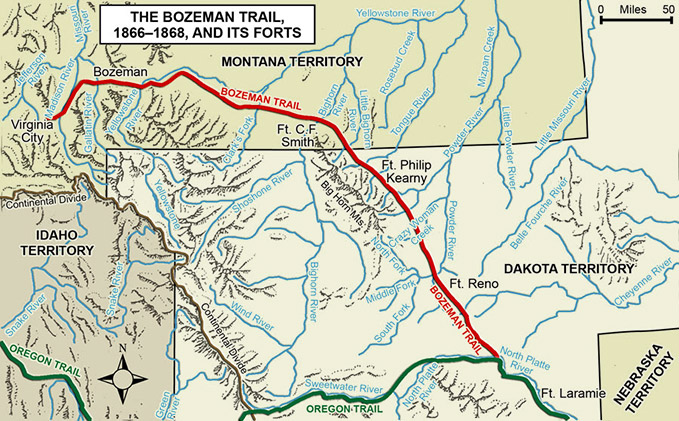 Late in March 1865, meanwhile, Maj. Gen. Grenville M. Dodge put Connor in command of the newly organized District of the Plains. Connor’s duties: keep the roads open, safeguard mail, keep the telegraph lines operating and mount an offensive into the Powder River country. Dodge wanted Connor there before the grass started to grow and the Indians' grass-fed horses got strong again after the winter.

In addition, Dodge’s superior—Maj. Gen. John Pope, head of the recently created Division of the Missouri—expected complete success. "It is absolutely essential," Pope wired Dodge, ". . .that this Indian force in the Black Hills be routed as soon as possible. . . .I have assured Judge Hubbard that you will clear out those Indians. Do not, therefore, fail to do it."

Flash in the pan on the Powder

Connor planned to build a fort on the Powder River and join and resupply two columns coming from the east—one coming all the way from Omaha and commanded by Col. Nelson Cole, the other coming from Fort Laramie and commanded by Col. Samuel Walker. Together they were to attack any Indians in the vicinity of the Powder. But Connor couldn't move without supplies, horses and troops, which were slow in coming to him. Finally, he felt he had to circumvent regular channels. He ordered Cole to purchase supplies directly and hire civilian wagons and teamsters.

On July 1, 1865, Cole’s wagon train left Omaha with 1,400 men and 60 days’ rations, less for the animals. On July 30, Connor departed from Fort Laramie with around 360 troops and 95 Pawnee scouts, plus added supplies for all three columns of troops. He traveled the Bozeman Trail to where it crossed the Powder River, where he made sure construction had begun on the fort that would carry his name. The spot lies on the river east of present Kaycee, Wyo. and north of Sussex. Connor left some of the supplies there, and then continued north into the Tongue River country. 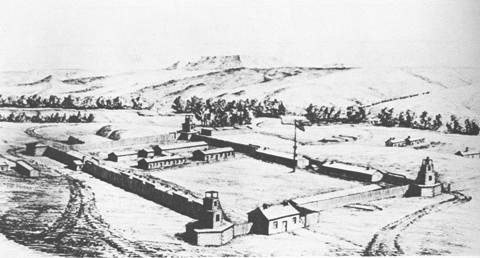 Walker left Fort Laramie on August 5, a few days after Connor, with 600 men and a string of pack mules. Cole was to skirt the Black Hills on the east and north, Walker was to skirt them on the west and both were to attack any Indians they found in the area. Connor had ordered Cole and Walker not to accept offers of peace but to “attack and kill every male over twelve years of age.” Maj. Gen. Pope reportedly considered this order “atrocious” and instructed Dodge to countermand Connor’s order, although this action was moot—Cole and Walker didn’t find any Indians until the Indians found them.

Once west of the Black Hills, Cole and Walker, out of touch with each other, headed separately into the Powder River country toward the rendezvous at the mouth of the Rosebud, where Connor had told them they would find supplies. Cole couldn't find passage for his wagon train over the divide between the Powder River and the Tongue rivers, however, nor could his scouting party locate either Connor's column or any promised supply depot. Therefore Cole turned up the Powder River, planning to return all the way to Fort Laramie.

Both Cole and Walker described the country they traveled through as "barren," with Cole noting further it was "nothing better than a desert and barren waste away from the banks of occasional streams." They found little grass for their animals and no game to supplement their meager rations.

Connor, moving more quickly with the smallest column and aided in finding his enemies by his Pawnee scouts, engaged in the only real fighting of the expedition when he attacked the Arapaho village of Black Bear near the end of August. Afterward, he moved his men and supplies northeast down the Tongue, heading for the rendezvous with Cole and Walker.

It soon became obvious that he would not arrive on time, however, and he sent a scouting party ahead to meet them. The scouts reported no trace of the other columns on the Rosebud or its vicinity. Connor sent scouting parties into the Powder River country with orders for Cole and Walker to move up the Powder to Fort Connor for supplies.

Cole and Walker, meanwhile, were encountering trouble of their own. They repelled two attacks from Indians, September 2-3 and September 8-9. The first attackers, according to the Cheyenne mixed-blood George Bent, were Minniconjou, Sans Arc, Hunkpapa and Blackfoot-Sioux seeking horses. 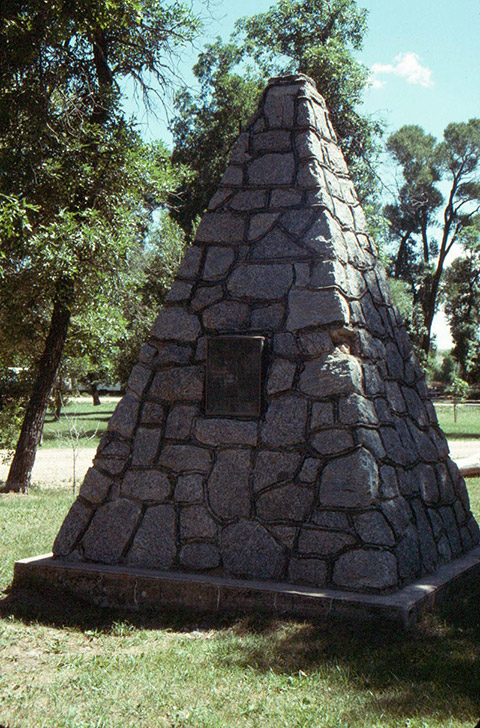 ​The second skirmish occurred when a combined force of Sioux and Cheyenne discovered the two columns, but the Indians didn’t have enough weapons and they decided the soldiers’ horses and mules were too exhausted to be worth stealing. They gave up the battle and traveled elsewhere.

By the time Connor’s scouting parties found Cole and Walker’s columns, Cole's men had stretched their 60 days of rations through 82 days and Walker's troops had spent 15 days on half-rations. Just between September 3 and 9, Cole lost 639 horses and mules, about a fourth of his herd, due to exhaustion and cold.

They finally arrived at Fort Connor on September 20. Many of the men were shoeless, wearing rags and living by eating the dead animals. Years later, George Bent remembered that a person could have followed Cole's column all the way from Omaha by going from the carcass of one Missouri horse or mule—formerly pampered, now dead—to the next.

Meanwhile Secretary of War Edwin M. Stanton had received notice of requisitions for more than $2 million per month for the Powder River Expedition. He pressured Pope to cut expenses and troops.

On August 22, Pope abolished the District of the Plains he had established just a few months earlier with Connor in charge. Pope also relieved Connor of command the Powder River Expedition, and ordered him to travel at once to Fort Douglas near Salt Lake City to command the District of Utah.

Connor did not receive these orders until September 22, however, when he had finally managed to gather all the columns at Fort Connor, and the Powder River Expedition was nearly over in any case.

Still, the expedition was initially reported as a success. Walker, for example, noted, "We drove the Indians entirely off the Powder." Later reports, including Bent’s, revealed a less glowing story.

After Black Bear’s village was attacked and burned, its people were forced to drain the resources of other Arapaho bands if they were to survive. Many joined the Cheyenne and Lakota Sioux resistance of the coming years, but the attack was still a severe blow to the military strength of the Arapaho tribe.

Fort Connor was later renamed Fort Reno. It was finally abandoned in 1868 after the Treaty of Fort Laramie ended Red Cloud’s War, and tribes burned it down soon afterward.

More about Ranchester at Wyoming Places