Church Butte is a soft sandstone and clay landform standing alone to the left of the Oregon-California Trail as it heads southwest toward Fort Bridger. The butte was an important landmark on the route between Green River and Fort Bridger and is located about 10 ten miles southwest of present Granger, Wyo., adjacent to a gravel road that once was a branch of U.S. Highway 30. At its highest point, the butte rises about 100 feet above the surrounding prairie. Except for nearby gas wells, the area is now deserted and just as desolate as it was in trail days, though at one time a busy service station stood just across the road. .

The name Church Butte did not come into general use until the 1850s. Before that, emigrants, if they called the landmark anything, made up their own names, often comparing its knobs and eroded towers to imaginary castles and pyramids. 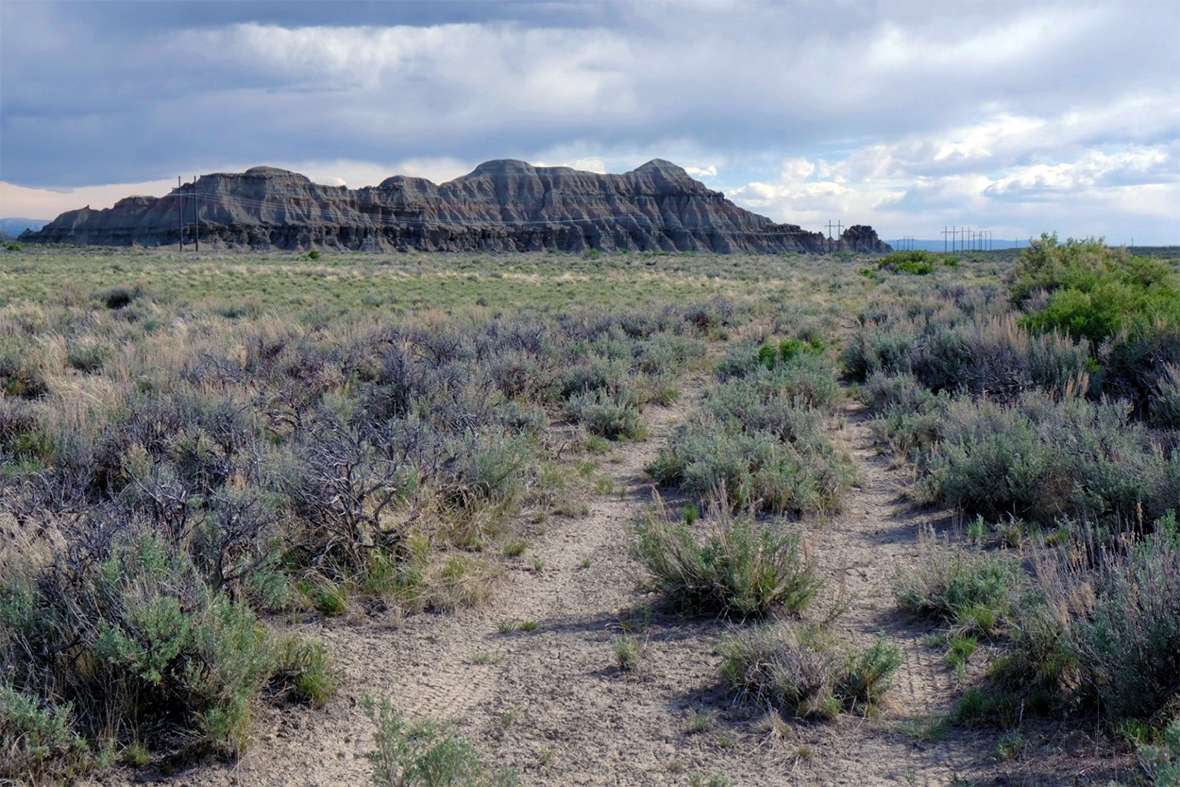 An early use of a name involving the word church comes from Howard Stansbury, an Army officer returning with his surveying expedition from Salt Lake City on Sept. 12, 1850. Stansbury wrote, “Struck out of the bottom of Black’s Fork & reentered the road rising a hill to ‘Church Hill’. Followed the road for about 3 or 4 miles over a level country of sand and clay almost denuded of vegetation except Artemisia & liquorice weed. …”

Civilian Albert Carrington was with Stansbury’s outfit and on the same day, wrote, “Rose onto 1sttable & went nearly East to the old road, near the church (an isolated cliff of brown & green indurated clay, & brown sandstone [worn] by the elements into fantastical shapes, as minarets, spires, aisles etc. capped by domes) traveled on the old road & soon left it on the left . . .”

Stansbury and Carrington probably heard the butte called the “church” by Mormons in Salt Lake, as at various times church services conducted by Mormon companies heading for the city may have been held there.

One of the earliest descriptions of Church Butte comes from John Boardman, an Oregon emigrant of 1843. Boardman’s report predates Mormon companies by four years and the forty-niners by six. He passed on Aug.12, 1843, and seems to have been very impressed with the butte’s appearance: “Crossed Black’s Fork, and passed Solomon’s Temple, a singular mound of clay and stone of the shape of a large temple, and decorated with all kinds of images; gods and goddesses, everything that has ever been the subject of the sculptor; all kinds of animals and creeping things, and everything that art has manufactured or brought into notice. A magnificent and striking sight.”

Pardon D. Tiffany was a member of the Pioneer Line—a commercial enterprise that took paying customers over the trail to California for a fee—and came to the butte on July 28, 1849. Tiffany wrote, “Between the second and 3rd crossing of Black’s fork there is the remnant of a clay range of bluffs near & on the left of the road, the 1stone of which appears to be nearly stone & the wind & rain have worked the edges & top into many curious shapes. The soil of clay for a long time past has been cut up into a worse [condition] than St. Louis dust & fills the eyes and mouth during the high winds with saleratus.”

Three days later David Staples called the line of buttes to the left of the road the “Rain Bow” bluffs and mentioned Church Butte, explaining, “Our road ran along near the ‘Rain Bow’ bluffs. They derive their name from the different colors of clay and sand mixed up the sides. We noticed one prominent bluff whose sides presented with a little stretch of imagination every variety of forms—groups of men, heads of animals &c. Looked like Egyptian architecture.”

In 1852, Oregon emigrant Mariett Cummings thought Church Butte was the most impressive trail landmark she had yet seen and had a unique name for it. On June 29 she wrote: “Passed the most magnificent curiosity I have ever seen on the road. It was a stupendous rock of petrified clay and sandstone of blue and light and dark brown color. There were spires and domes, grottoes and caves of every form and size. It was immensely high and colonnaded. One’s voice would reverberate several times. We called it ‘Echo Rock.’”

Frederick H. Piercy saw Church Butte in 1853, and in his description he let his imagination run riot: “Just before arriving at Black’s Fork, [ford] No. 3, where we camped, we passed as splendid range of clay bluffs which, as we passed them, seemed covered with figures in almost all attitudes—nuns confessing to priests, and warriors fighting, and transforming and varying themselves as we changed our position.”

Finally, British adventurer and travel writer Richard Burton, aboard the Overland Stage on his way to Salt Lake City, arrived on Aug. 7, 1860, and compared the scenic butte to cathedrals he had seen in his native England. Burton wrote:

After twelve miles we passed Church Butte, one of many curious formations lying to the left or south of the road. This isolated mass of stiff clay has been cut and ground by wind and water into folds and hollow channels which from a distance perfectly simulate the pillars, groins, and massive buttresses of a ruinous Gothic cathedral. The foundation is level, except where masses have been swept down by the rain, and not a blade of grass grows upon any part. An architect of genius might profitably study this work of nature: upon that subject, however, I shall presently have more to say. The Butte is highly interesting in a geological point of view; it shows the elevation of the adjoining plains in past ages, before partial deluges and the rains of centuries had effected the great work of degradation.

Burton’s description works just as well today as it did in 1860. Made as it is of soft sandstone, Church Butte might be expected to be eroding very rapidly; a plaque placed in 1930 to honor Mormon pioneers has been dislodged by erosion. Still, comparisons with photos from the 1800s show the butte looking very much the same then as it does now. 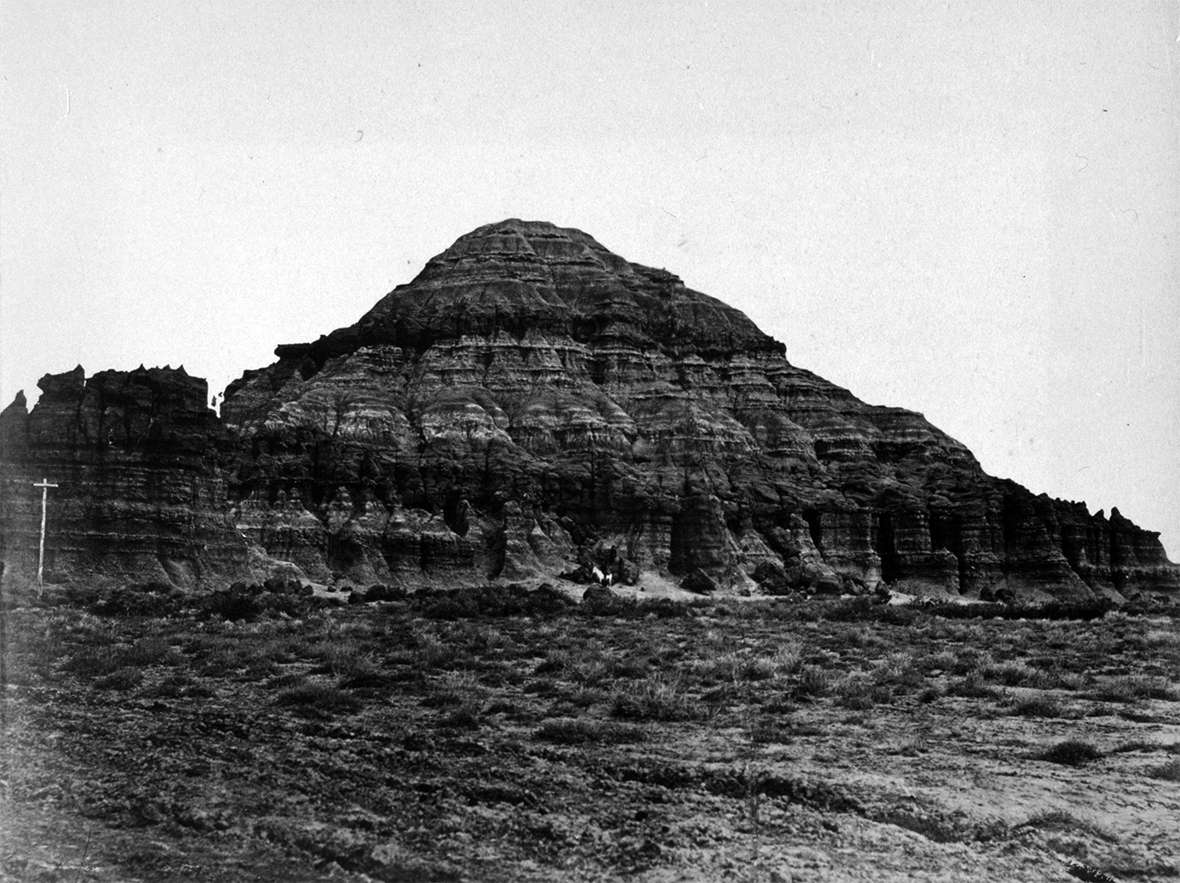 More about Granger at Wyoming Places

Church Butte, an important landmark on the Oregon/California/Mormon Trail across southwestern Wyoming, lies about 13 miles northwest of Lyman, Wyo., and 10 miles southwest of Granger, Wyo. From I-80, take Exit 53 between Granger and Lyman. Follow the Church Butte Road north—it’s a gravel road—about five and a half miles to the road’s intersection with Uinta County Road #233. Turn right. The butte is plainly visible on the right.

Travel on gravel roads in Wyoming is safest between June 15 and October 1 in clear, dry weather.