After the transcontinental emigrant trails were well established, stagecoaches began to carry passengers and mail to Oregon and California along the same routes, and stage stations sprang up across the western United States. The site of the Granger Stage Station, on U.S. 30 west and north of present-day Green River, Wyo., was originally home to a dugout station called Ham’s Fork. The station building, with two-foot-thick walls made of cut native stone and lime-sand mortar, represents the different eras of transcontinental travel. 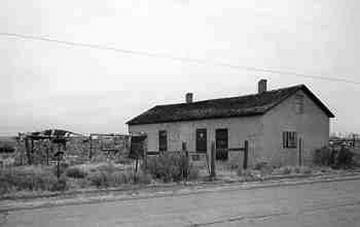 Fur trappers and traders passed the confluence of the Ham’s and Black’s forks of the Green River as early as 1824, frequented the area often and the fur trade’s annual rendezvous at the spot in 1834.

In the 1840s, emigrants traveling the trails to California and Oregon crossed Ham’s Fork near its mouth. In 1856, a stage station was built near the Ham’s Fork-Black’s Fork confluence. The place served as a stop on the short-lived Pony Express route in 1860-1861, and when the Overland Stage changed from its South Pass route in 1862 to use the Bridger’s Pass and Bitter Creek route instead, across what’s now southern Wyoming, the station was renamed South Bend Station.

This new Overland Trail route rejoined the old South Pass route at Ham’s Fork. The new station name reflected the sudden bend the Black’s Fork made nearby, changing its northeasterly course to a southeasterly flow toward the Green River.

The name was changed yet again—to Granger this time—when the Union Pacific Railroad was built through the area in 1868. A rail camp was located near the station, and a sidetrack, station buildings and water tank for locomotives were constructed. Granger became an active station on the rail line.

Clarence E. and Eva Adams donated the site of the old stage station and one acre of land to the state of Wyoming in 1930 to honor the pioneers who traveled through the area. The stage station was designated as a State Historic Site that year.

Horace Greeley, well-known editor of the New York Tribune from the 1840s through the early 1870s, and celebrated American author Mark Twain are just two famous early-day passengers who passed through the stage station. The station was named to the National Register of Historic Places in 1970.

More about Granger at Wyoming Places