On the Oregon-California Trail in western Wyoming lies the grave of 20-year-old Nancy Hill, who died of cholera July 5, 1852, while traveling with her family from Missouri to California. The fenced grave lies near the summit of Dempsey Ridge about nine miles west of Ham’s Fork.

The stone at the grave is not original, however, and its inscription for many years caused some confusion about the cause of the young woman’s death.

Nancy Jane Hill was born in Monroe County, Mo., in 1832. In 1852 she was traveling with a wagon train made mostly of the families of her father, Wesley Hill, and his three brothers—about 65 people in all, driving 14 wagons and around 400 cattle. 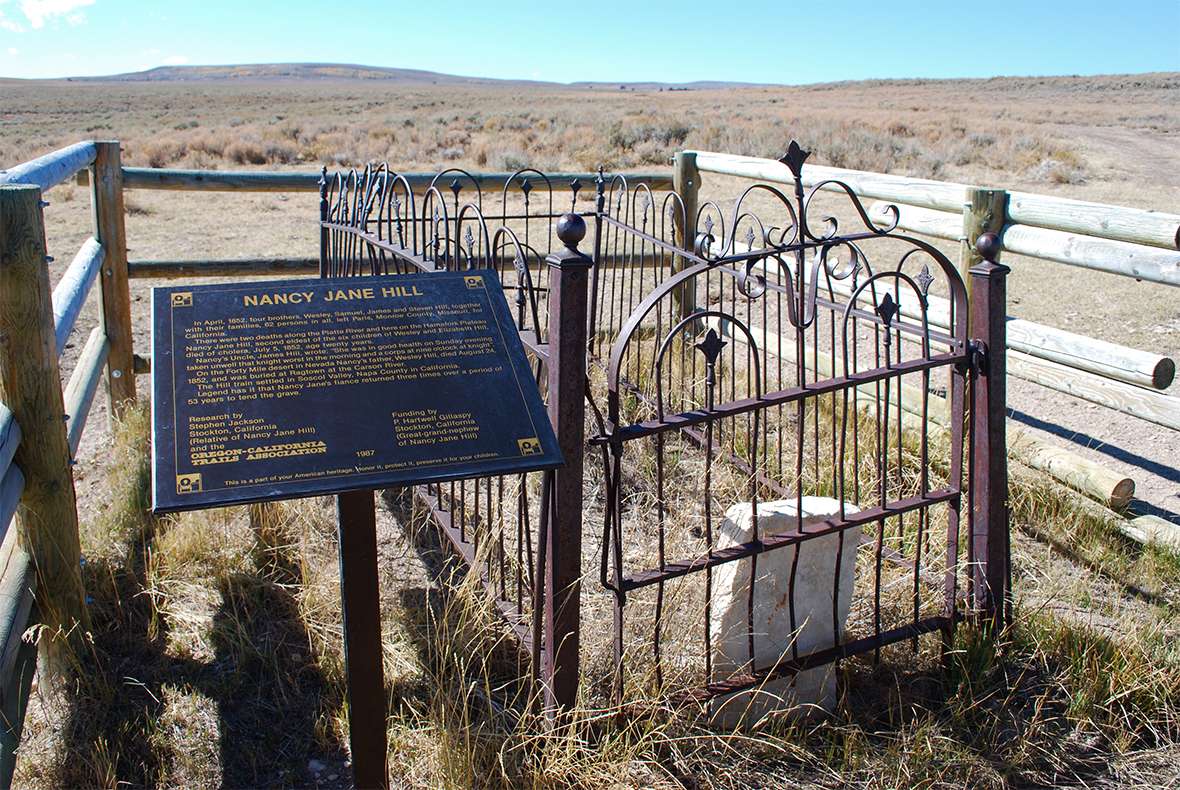 Nancy was Wesley and Elizabeth’s second child. Her older sister, Mary Elizabeth, was born in Kentucky just before the move to Missouri. The Hills had five additional children who were born later, all in Missouri: John William in 1833, Angeline in 1834, George Wesley in 1837, Sarah Margaret in 1839, and finally Abraham, who was born in 1841. Elizabeth, Wesley’s wife, died in 1842.

Wesley was one of four Hill brothers who had moved to what became Monroe County in about 1830. They were from Bourbon County, Ky., where Wesley and Elizabeth Kiplinger were married on July 23, 1829. Nancy was named for Wesley’s sister, Nancy Jane, who was living with the family as Wesley’s ward since the death of their parents. Elizabeth Hill died in 1842.

Wesley Hill is said to have made one or two overland trips to California with local merchants in the 1840s. Back in Missouri, he married widow Eglantine (Holder) Sanders in 1848. In 1849, Wesley, with his son John, and two of his brothers, Samuel and Stephen, joined the California Gold Rush. Wesley left his six other children in the care of his brother James where they all are listed in his household in the 1850 Monroe County census. Nancy Jane Hill, age 17 appears as “Jane,” as she was probably known, to distinguish her from two of her aunts, both also named Nancy Jane. One of these was the foster sister mentioned above, the other the wife of James Hill.

California census records show that Wesley’s brothers worked as miners, while he worked as a merchant. By 1851 all four were back in Missouri to prepare for another overland journey to California, this time with their wives and families.

Ill health during the journey

Like many companies in 1852, they were plagued by ill health and disease. One of the hired men died of cholera on the Little Blue River in present Nebraska, and on June 8, Henry Hill, father-in-law of Nancy Jane’s sister, Mary Elizabeth, likewise died of cholera while they camped near present Torrington, Wyo. Henry Hill was a member of another Hill family, unrelated, except by marriage, to the family of Nancy Jane Hill. 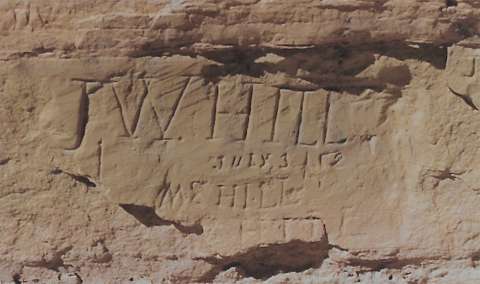 It’s clear that the Hill clan used a trail variant called the Slate Creek Cutoff, for at Emigrant Springs on the cutoff, neatly carved on the sandstone bluffs, are inscriptions of three members of the Hill wagon train. The initials are those of J.W., M.E., and one unreadable initial followed by B. They are dated July 3, 1852.

Since the company did not travel on the third of July due to the illness of Samuel Hill’s son, Abe, who later recovered, the three had time on their hands that day. The first two inscriptions could be John W. and Mary Elizabeth Hill, siblings of Nancy Jane. It cannot be determined with any certainty who “? B. Hill” was, but perhaps he or she was one of their many cousins in the company.

The only contemporary account of the journey comes from letters James Hill wrote to a former neighbor back in Monroe County. From one dated July 6, we have a sparse eyewitness testimony about Nancy’s death:

This day was called on to consign to the tomb one other of our company, N.J. Hill. She was in good health on Sunday evening. Taken unwell that night, worse in the morning and a corpse at nine o’clock at night. We had two doctors with her. They pronounced her complaining cholera but I believe it was nothing more than cholera with congestion connected.

Wesley Hill, Nancy’s father, died--probably of cholera--on Aug. 24 after a long illness. He was buried at the emigrants’ cemetery at Ragtown on the Carson River in present Nevada.

Local ranchers told many conflicting stories about imaginary Nancy Hill sweethearts who reportedly came back to visit the grave in later years. These stories probably have no basis in fact. One of them included a hair-raising story of an Indian attack on the wagon train and that Nancy had been killed by an arrow, all this supposedly occurring in 1847. This led one rancher to install in good faith the current headstone at the grave with that year as her date of death, and including, as part of the epitaph, “Killed by Indians.”

Family tradition has it that the original headstone was inscribed by Robert Gillaspy, one of the hired hands, who later married Nancy’s sister Angeline in California. Robert is thought to have worked as a stonemason in Missouri. There is no record of how this marker appeared. However, three later emigrants noted the grave and provided evidence of what the inscription was. Sarah Raymond, who having crossed Dempsey Ridge on Aug. 19, 1865, wrote, “We passed eight graves on the mountains one [a] young lady twenty years old from Monroe County, Missouri.”

Two days later Dr.Waid Howard passed the grave and wrote: “Twenty yards beyond [the 1849 Alfred Corum grave and to the right of the road is the grave of Miss Nancy J. Hill who died July 5, 1852, from Monroe county, Miss[ouri]. We are now resting against the headstone. The grave of Corum is plainly in view. Though far from their places of nativity these graves surely have each other company on one of the most lovely spots passed upon the mountain.”

William E. Jackson was on a west-east cattle drive that originated in La Grande, Ore., when he noted the grave on Aug. 3, 1876.

The headstone must have lasted until settlement times, since the grave’s identity was never lost. Eventually, after the headstone disappeared, the other details included on it were forgotten, and the replacement stone, with its incorrect information, along with confusion over other pertinent facts, misled later researchers.

In the 1980s when Hill family descendants living on the west coast became aware of the grave’s continued existence, the identity of Nancy Hill was firmly established. Later, several of them traveled to Wyoming to attend a dedication ceremony for the Oregon-California Trails Association marker placed at the grave in 1987. The marker and new fence around the grave was funded by Hartwell Gillaspy--a direct descendant of Nancy’ s sister Angeline and her husband, Robert Gillaspy, the hired hand who had engraved the epitaph on the Nancy Jane Hill headstone 135 years before.

Nancy J. Hill, age 20, dies of cholera west of Ham’s Fork on the Sublette Cutoff of the Oregon-California Trail.