There were several “Emigrant Springs” on emigrant routes during the historic trail era. Two are in Wyoming, and these are only about 25 miles apart. One is on the Sublette Cutoff at the summit of Dempsey Ridge. The other—the focus of this article—is on the Slate Creek Cutoff about 15 miles west of the Green River.

The Kinney/Slate Creek Cutoff was opened in 1852 and was possibly developed by mountain man Charles Kinney. A variant of the Sublette Cutoff, this route was established to avoid most of the approximately 45-mile-long desert crossing of the Sublette between the Big Sandy and Green rivers. Instead of heading nearly due west across the desert from Big Sandy to the Green, emigrants intending to take the Kinney Cutoff stayed on the Fort Bridger Road and traveled farther down the Big Sandy until they were about eight miles from the crossing at Lombard Buttes. There they turned northwest and crossed 10 or 12 miles of desert to reach various ferrying operations on the Green River. Once across, they continued upstream seven or eight miles on the west side to near the mouth of Slate Creek. From there they followed upstream along the creek for about 15 miles to Emigrant Spring, located in a hollow at the bottom of a steep, rocky hill. 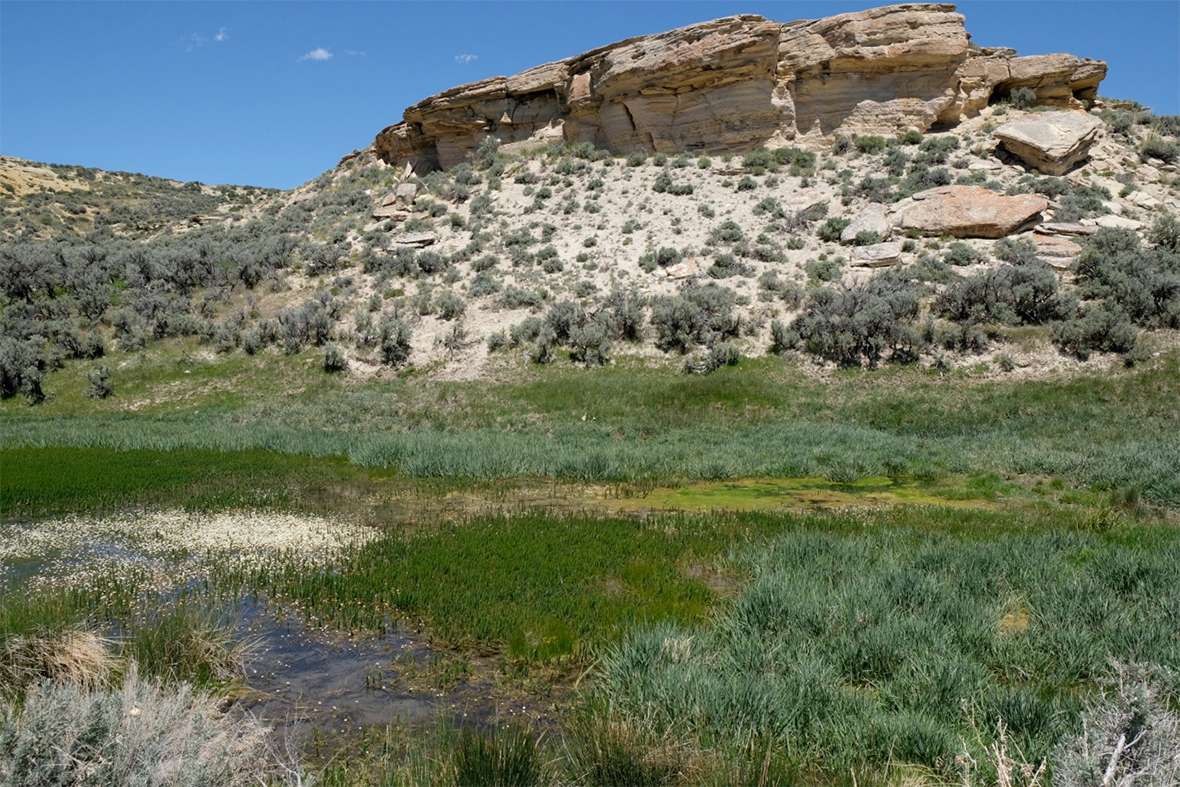 The spring had no generally accepted name, so emigrants, if they called it anything, used whatever name happened to occur to them at the time.

An early arrival, Luzerne Humphrey, stopped there on June 23, 1852. In his diary he described fishing in the Green River and catching two fish that resembled Pike, but without teeth. The road was “some sandy & quite hilly.” After crossing Slate Creek the next day, he camped at Mountain Valley Springs about 12 miles away, where, he wrote, “… I cut my name in the Rocks of the Bluffs to the North East.”

Humphrey pointed out the main interest the spring has for current visitors, the collection of inscriptions on the bluffs surrounding the deep hollow. Apparently, there were once thousands of them, but today a careful count finds only about 300 surviving on the crumbling sandstone bluffs, with fewer visible every year.

A few days after Humphrey arrived, R.O. Hickman saw the bluffs and noted that already there were thousands of inscriptions. On June 29, 1852, he wrote, “This place was one of the most singular looking places I have seen yet. It is called the Indian Springs. There was a most beautiful spring of pure water flowing from the foot of the mountain, and the bluffs along the north were composed of a soft substance resembling both chalk and lime and carved so full of names that I could hardly find room to register my own.”

The next year, Amelia Knight’s motherly report described a long day of travel—20 miles—in her diary entry of June 30, 1853. She spoke of camping “near a clear cold spring of good water, grass plenty, and dry sage brush to burn. The children have climbed a mountain to see the sun set.” The ”mountain” probably was the top of the bluff on the north side of the spring. 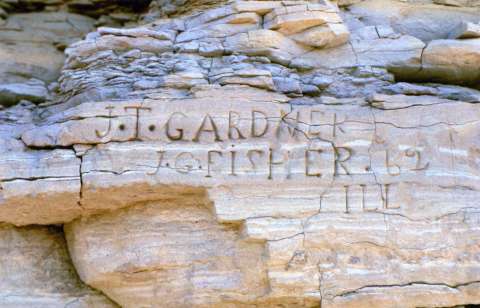 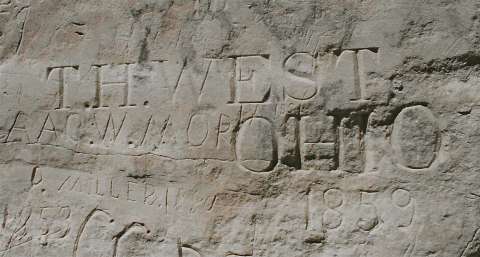 John Murray got there about three weeks later, and on July 19, made note of the gigantic sagebrush growing in the hollow. He wrote, “The hills around look red & where we came into the first deep hollow the ground was all red & a most beautiful cold spring gushed out of the hills 50 or 60 feet above the road. Here the red top’d Oregon Company were camped & about here in the hollows was the largest sage brush I ever saw 5 or 6 feet high and 4 to 6 inches thick at the ground.”

If anything, Murray underestimated the height of some of this sage. Today, much of it appears to be as tall as 10 or 12 feet, and a visitor could almost get lost in what seems like a forest of sagebrush.

Even after the Lander Trail opened in 1859, the Kinney Cutoff continued to be frequently used. Eva Morse with her company was there on Aug. 9, 1859, when she wrote, “We are now camped in a valley, between some high bluffs. Have just come down a very long and steep descent, at the bottom of which is a beautiful cold spring. We camped near it. Just above them rise high clay cliffs and sand bluffs, on the sides of which are written thousands of names.”

There are many inscriptions dated in the 1860s and continuing into the 1880s when the cutoff was being used primarily by Oregon and Idaho emigrants—including Emily Towell who described her experience on July 13, 1881. “We saw a band of cattle from Oregon and Idaho. This made us feel much nearer to our destination. At Rock Springs there were hundreds of names and dates carved in the rocks above the springs, names of emigrants who had gone before us. Some of our crowd cut their names beside those of their predecessors.”

Another emigrant of the 1880s, Viola Springer, like Emily Towell, noted the emigrants’ vast bulletin board carved on the surrounding bluffs. On July 27, 1885, Springer wrote, “We camped today noon by a spring where there was some big rock back of the spring covered with peoples names.”

A side road from the main Sublette Cutoff on Willow Creek may have passed to the spring, but the generally accepted and most important junction of the two cutoffs was on the west side of Slate Creek Ridge. Thereafter, the Slate Creek and Sublette Cutoffs followed one track and in about 18 miles, after a steep climb out of Ham’s Fork Valley, they reached the second Emigrant Spring on Dempsey Ridge.

California-bound R.O. Hickman finds the bluffs at Emigrant Spring on the Slate Creek Cutoff “carved so full of names that I could hardly find room to register my own.”

The grave of 20-year-old Nancy Jane Hill of Monroe County, Mo., who died in 1852, lies in a fenced enclosure on public land on the Ham’s Fork Plateau near the summit of Dempsey Ridge, northwest of Kemmerer, Wyo.

The site can be accessed with a four-wheel-drive vehicle as long as the roads are reasonably dry. Inquire in Kemmerer about likely road conditions.

From Kemmerer, drive north on U.S. 189. At the township of Frontier, veer left onto Wyoming 233 and drive north for approximately 3½ miles. Just before Hams Fork Bridge, make a sharp left turn onto a county gravel road. Drive approximately 11 miles northwest to the road’s intersection with the intersection with the Sublette Cutoff. Drive west past the grave of forty-niner Alfred Corum to the grave of Nancy Hill, about 300 yards farther west.