The grave of forty-niner Alfred Corum is located near the summit of Ham’s Fork Plateau in Lincoln County in western Wyoming, on the Oregon Trail variant called the Sublette Cutoff.

The year of his birth is uncertain, but based on the marker inscription reported at his grave by contemporary diarists, the date must have been 1826 or 1827. Unfortunately, Alfred is not included in membership lists for the Henry Corum family compiled much later by descendants. Because he died young, with no children of his own, Alfred was evidently forgotten by later Corum generations, but trails researchers have discovered diary entries that help sketch his life.

Alfred Corum was a native of Cooper County, Mo., one of nine children of Henry and Gilla Lowrey Corum. Henry was born in North Carolina in 1795 and was one of seven brothers. Four of the brothers, together with their parents, moved to Kentucky for a few years and then in 1819 moved on to settle in what became Palestine Township in Cooper County, Missouri, 15 or 20 miles south of Boonville, the county seat. The four brothers who made the move to Cooper County are known to have been Henry, Heli, Hiram, and Harden Corum. Many descendants of these four brothers still live in the Boonsville area. 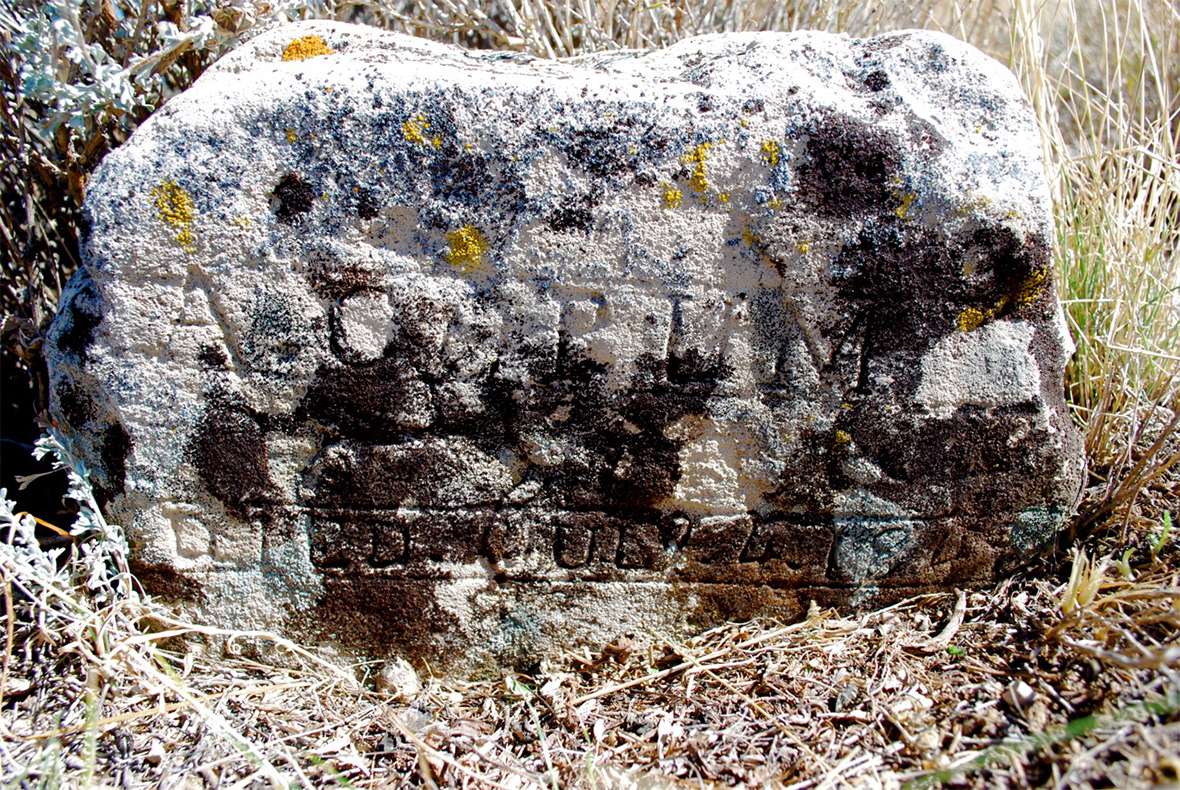 Henry and Gilla, sometimes called Gilley, had married in 1817 when they were residing in Madison County, Ky. Between 1820 and 1840, Henry and Gilla had five sons and four daughters.

Nothing is known of Alfred Corum’s life before he left for California in 1849. He probably had been working somewhere in Cooper County, probably as a farmer’s hired hand, perhaps at his father Henry’s place or for a relative or neighbor. There is no evidence that Alfred ever married.

What is known about Alfred Corum is that in 1849 he joined what became known as “Clark’s train of mule teams,” organized and captained by Bennett C. Clark, clerk of the Circuit Court of Cooper County, and comprised of 24 county residents, including four men named Corum: Alfred and his older brother John, and two of their cousins, Simeon, age 20, and Herod, 24, the sons of Heli and Eveline Lowrey Corum. The two sets of brothers were double cousins. Their mothers were sisters, and their fathers were brothers.

The company members left their homes on April 10, 1849. They had nine wagons and one other vehicle that Clark at first called a carriage. He later was more specific and referred to it as a Dearborn wagon, a vehicle that often was light enough to be pulled by one horse or mule. Mules were the company’s draft animal of choice. Most wagons on the historic trails were pulled by oxen, which were cheaper, slower and hardier.

At the start of the trip, Bennett Clark in his diary listed Alfred Corum on the company roster. The diary indicates the company’s journey was mostly routine, but with a recurring problem of wagon breakdowns. Clark’s group managed, however, to make good time and reached Ash Hollow in present western Nebraska on June 2 and Fort Laramie just eight days later. West of South Pass, they took the Sublette Cutoff on June 20. Five days later, they ferried across the Green River. About this time, Alfred Corum came down with an unspecified illness, possibly mountain fever.

On July 2, 1849, the company crossed Ham’s Fork of the Green River and climbed the steep, 600-foot hill just beyond the river to the top of Ham’s Fork Plateau, a lower spur of Dempsey Ridge. Clark wrote that they “laid by a day” because Alfred had been “sick for a week or 10 days.” Outside of the roster, this is the first time Clark mentions Alfred.

Clark’s diary entries of July 3 and 4 show that Alfred’s condition was dire and illustrate the tough choices often forced on Oregon Trail travelers. Clark wrote, “Whilst lying by some 200 wagons passed us & Alfred continued to grow worse & there was no prospect of his living it was deemed prudent for the wagons to start the next morning.”

Clark explained that most of the group continued on their westward journey on July 4, but left the Dearborn and six men “to render every service to our dying friend.”

The account continues, “As there was neither wood nor water near us we concluded to move him about 1½ miles where we found both. About 1 o’clock he died without a struggle & in full possession of all his faculties to the last. It was truly melancholy to reflect that whilst our friends at home were doubtless enjoying this great anniversary of national Independence in the usual way we were performing the last sad offices to one of our dead companions.”

Many years later, Wesley Corum prepared a manuscript that told of his father, Simeon Corum’s, recollections of the trip. Simeon’s report about his cousin Alfred’s death was brief. He wrote, “… Had to leave before he died. John Corum his brother stayed with him until he died, then buried him and caught up with the crowd. Papa [Simeon] had to go on with the main crowd as his brother Herod was sick with fever.”

The Clark company went on to California, suffering through the usual hardships along the way. As often occurred, the company broke into smaller units. Diarist Bennett Clark was a sick man when he finally reached California, probably in September. As soon as he was able, he left San Francisco by ship and returned to Missouri. Alfred Corum’s brother, John, quite likely made the return trip with Clark. The 1850 census shows that John at that time lived with his parents in Cooper County.

The Corum grave is marked by a small stone with an inscription that reads: “A CORUM DIED JULY 4th 1849.” It has every appearance of being an original headstone of the trail era. 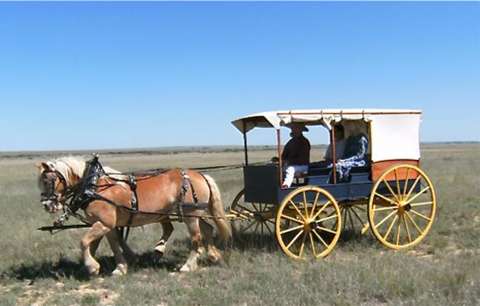 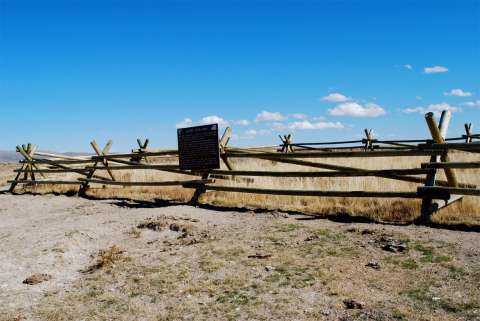 However, emigrant J. Goldsborough Bruff noted a wooden board at the head of the grave when he and Henry Austin passed by the following month. On Aug. 10 Bruff wrote that inscribed upon the board was, “Sacred to the memory of Alfred Corum, Who died July 4th, 1849. Aged 22 years.” On the same day, Austin recorded seeing the grave with the same date and age. The only other emigrant of the Gold Rush era who mentioned the grave by name was Andrew Woods on June 5, 1850. These three diary quotations are the only evidence we have of Alfred Corum’s age at the time of his death.

Sometime between 1850 and 1865, someone apparently replaced what was probably by then a badly worn wooden marker with the current small stone. Not all the information on the original marker was included in the new inscription, most particularly Alfred’s age when he died.

On Aug. 21, 1865, Dr. Waid Howard, a former resident of Cooper County, saw the grave and recorded an inscription that is identical to the one on the stone still at the grave. Howard stated that Corum’s grave was located about a mile beyond the grave of J.N. Tutt. However, because the stone only included Alfred’s first initial with his last name, Howard mistakenly noted Alfred’s name as Andy, and misidentified the town of Belton, Mo., as the location of the Henry Corum family. The Corums actually lived near now-defunct Cooper County town of Bellair.

The U.S. Bureau of Land Management has constructed a fence around the Corum grave and the other five or six graves thought to be nearby. Surface evidence for these other burial sites is scanty, and only one other grave, about 20 feet from Corum’s, can be located with any certainty, but the occupant of that grave cannot be identified.

Corum’s grave lies about three hundred yards east of the grave of Nancy Jane Hill, who died nearby while traveling west in 1852.

Missourian Alfred Corum, 22, dies while traveling to California on the Sublette Cutoff of the California Trail in present Lincoln County, Wyo.

The grave of 20-year-old Nancy Jane Hill of Monroe County, Mo., who died in 1852, lies in a fenced enclosure on public land on the Ham’s Fork Plateau near the summit of Dempsey Ridge, northwest of Kemmerer, Wyo.

The site can be accessed with a four-wheel-drive vehicle as long as the roads are reasonably dry. Inquire in Kemmerer about likely road conditions.

From Kemmerer, drive north on U.S. 189. At the township of Frontier, veer left onto Wyoming 233 and drive north for approximately 3½ miles. Just before Hams Fork Bridge, make a sharp left turn onto a county gravel road. Drive approximately 11 miles northwest to the road’s intersection with the intersection with the Sublette Cutoff. Drive west past the grave of forty-niner Alfred Corum to the grave of Nancy Hill, about 300 yards farther west.