On the North Platte River in eastern Wyoming, Fort Laramie plays a starring role in the history of the American West. Now a National Historic Site, Fort Laramie once was a way station for the thousands of pioneers heading overland to Oregon, California, or the Salt Lake Valley in the mid-1800s. With Laramie Peak in the distance, they rested briefly at the fort before lumbering on, their heavy wagons carving deep ruts in the soft sandstone south of present-day Guernsey, Wyoming. Overlanders followed the arc of the North Platte River deep into central Wyoming until they turned up the Sweetwater River, bound for South Pass over the Continental Divide. 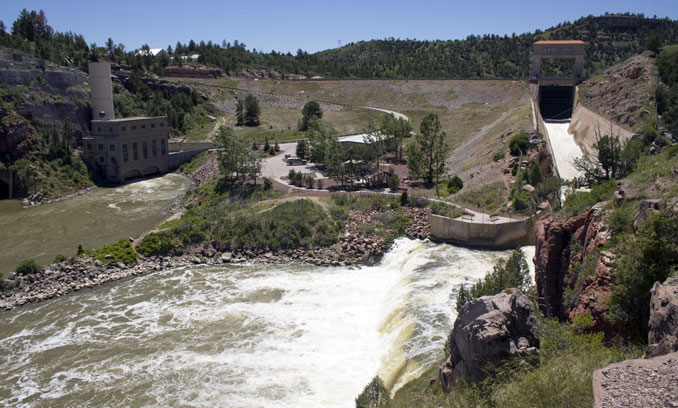 The North Platte River Valley is rich in history from its centrality to the Plains Indians and the fur trade, to its stage stops and Army forts, to its overland trail route, with wagon ruts still visible near Guernsey. The river is no less important today as it supplies the water to irrigate more than 335,000 acres, transforming Wyoming and Nebraska sagebrush and rangeland into productive agricultural land, where alfalfa, corn, potatoes, sugar beets, and dry beans grow.

The Bureau of Reclamation has constructed a number of dams on the North Platte River, including the historic Guernsey Dam, completed in July 1927 with its two-generator power plant and its elegant, classical arch gatehouse, all of which are listed on the National Register of Historic Places.

Guernsey Dam is a 135-foot-high, diaphragm-type embankment of sluiced clay, sand, and gravel. Eastern Wyoming residents, in search of electricity, first discussed the possibility of a dam near Guernsey in 1915, but it wasn’t until 1924 that Congress gave its authorization. A bid was let on May 2, 1925, to the Utah Construction Company of Salt Lake City, the only company putting in a bid, and work began three weeks later.

By summer, 200 laborers were at the site at the mouth of the small canyon, using steam shovels to gather broken rock for the dam’s embankment. Trains hauled the material to the dam site and dumped it from trestles on each side of the embankment. Completed on July 13, 1927, Guernsey Dam stores water and also controls flow from other dams on the river. 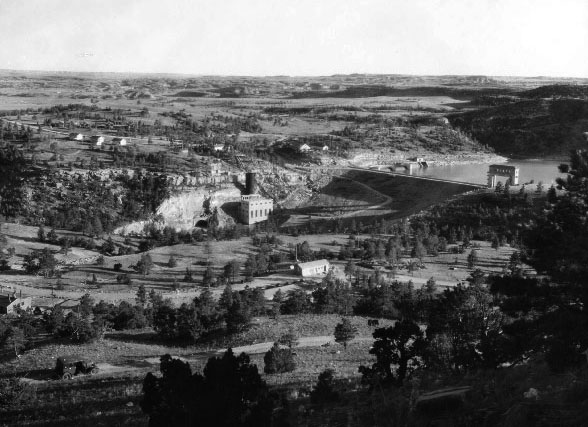 In addition, as an outgrowth of the Depression-era Civilian Conservation Corps (CCC), Guernsey’s reservoir, Lake Guernsey, has become a showplace and prototype for developing recreation areas around western reservoirs. At Guernsey, National Park Service landscape architects assisted the State of Wyoming by developing the kind of master plan that would be used in scores of state and local park developments around lakes and reservoirs.

On May 21, 1934, the CCC, a work relief program for young men 18 to 25 years old, located a camp (Camp BR-9) on a scenic bluff north of Guernsey Dam. A second camp, Camp BR-10, was established about a mile west of the dam in July 1934, a time when the reservoir shoreline was largely undeveloped.

These CCC workers set about constructing what became a showplace of state park design. They built roads, including Lakeshore Drive and Skyline Drive, where winding steps still lead to The Castle, an overlook offering a spectacular view of the lake. They built bridges, picnic shelters, water fountains, trails and a museum on the summit of a hill.

Made of locally quarried bluff and white sandstone, and featuring a roof of heavy, hand-hewn timbers covered with cedar shingles, the museum displayed the rustic architecture considered appropriate for a park. Inside, two exhibit halls and 14 display cases depict eastern Wyoming history and prehistory, exhibits that mostly have been maintained in their original locations.

Lake Guernsey State Park, historian Christine Pfaff writes, is “the most important early example of recreational development around a Reclamation reservoir in the West.” The park was one of the first two joint endeavors by the Bureau of Reclamation, National Park Service and CCC.

In 1997, Lake Guernsey State Park District was designated a National Historic Landmark. The park, the nomination states, is “an extremely significant and well preserved state park of the period, and epitomizes the artistic quality and high aspirations held for the state parks designed by the Park Service and built by the Civilian Conservation Corps during the 1930s.” The historic district contains 60 contributing buildings, structures, and sites, of which all but a few were the work of the young men of the CCC.

Lake Guernsey’s location--so close to historic trail sites, and with its scenic, rugged shoreline covered with cedar and pine trees--figured in its selection as a recreation site. Just two miles upstream from the town of Guernsey, Wyoming, and within driving distance of Cheyenne and historic Scotts Bluff and Fort Laramie, local boosters pushed for development of the reservoir, realizing that it could draw additional tourists to the region.

Guernsey Dam is two miles upstream from Guernsey, WY. From Interstate 25, take U.S. 26 east toward Guernsey. Turn north onto WY 317 (Lake Shore Dr.), which goes to the dam and continues over it. Lake Guernsey State Park may be accessed from WY 317 on the south, or WY 270 from the north. The park grounds are open 24 hours a day, year round, weather permitting; the museum is open May 1-September 30. The park offers a variety of recreational activities, including camping and fishing; there is a daily use fee ($4 for Wyoming residents; $6 for non-residents). For information, visit Wyoming State Parks' Guernsey State Park website.