Cody, Wyo., is located on the Shoshone River in the Bighorn Basin in northwest Wyoming. This basin is surrounded by mountain ranges on three sides: the Absarokas to the west; the Owl Creek Mountains to the south; and the Bighorn Mountains to the east. The east entrance to Yellowstone National Park lies 53 miles to the west, up the North Fork of the Shoshone. The Bighorn Basin was restricted from white settlement by treaties with the Indians in1868. Ten years later, those restrictions were lifted and early settlers began to come into the basin. This made the area one of the last frontiers settled in the lower 48 states. 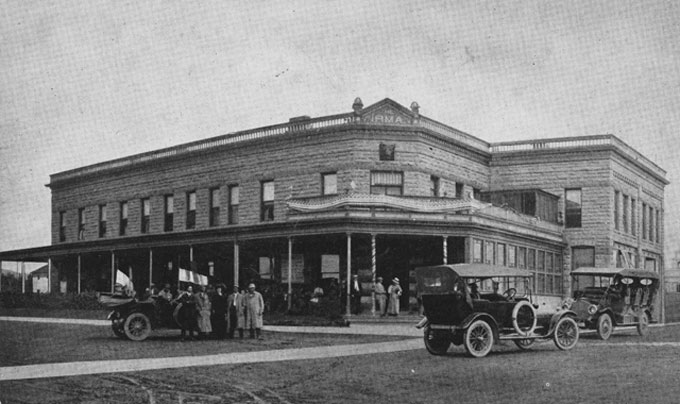 William F. “Buffalo Bill” Cody was visiting Sheridan, Wyo., in 1894, when his son-in-law, Horace Boal, took him to the top of the Bighorn Mountains for a view to the west over the Bighorn Basin. Although Cody had heard of this area from Indians, Yale paleontologist O.C. Marsh and others, he personally had never been to the northern basin. On learning that a group of Sheridan businessmen was already interested in founding a town there, Cody eagerly joined the effort. He saw the beauty of the region, its proximity to a Yellowstone already attracting tourists, the abundance of game and fish, and land available for ranching and farming.

However, Beck did not like the location or the fact that a great deal of the land was already owned by Charles DeMaris. And DeMaris was not interested in selling. Beck began looking at other possibilities to the east and soon settled on the town’s present location. In the fall of 1895, construction began on the Cody Canal, which would carry water from the south fork of the Shoshone River northeast to the town. In May 1896, Beck and surveyor Charles Hayden laid out the site of the present town.

“The Colonel,” as the townspeople often referred to Cody, invested a great deal of money in the birth and growth of the town. Beck, a town founder, lived there and supervised its ups and downs. The Chicago, Burlington and Quincy Railroad was interested in building a spur to Cody from Toluca, Mont., located in the Pryor Mountains northeast of Cody on the north-south railroad line. To make sure that the CB&Q built the line all the way to Cody, the Shoshone Land and Irrigation Company sold the majority of the town lots to the railroad company. The railroad thus gained a vested interest in the success of the town, and the irrigation company dropped the word “Land” from its name. The railroad line to Cody opened on Nov. 11, 1901. The Cody Depot was located on the north side of the Shoshone, across the river from the town.

An 1896 attempt at a newspaper, the “Shoshone Valley News,” meanwhile, lasted only briefly. The “Cody Enterprise” started operating in 1899 and is still publishing today under a masthead that honors Buffalo Bill as its founder. By 1900, Cody had a population of slightly more than 300, and in 1901 the town was incorporated. That same year the CB&Q was completed from Toluca to Cody. The Irma Hotel, named for Buffalo Bill’s daughter, opened November 18, 1902, and boasted that it was the most modern hotel in the Rockies.

In 1902, the Newlands Reclamation Act created the U.S. Reclamation Service and decreed that all funds received by the federal government from the disposition and sale of public lands in the 16 western states were to be used to construct dam and irrigation systems that were too large and too costly to be undertaken by the private sector. With the passage of this act, Buffalo Bill’s vision to dam the Shoshone River began to take shape. The Shoshone River Valley Project was the first begun after the passage of the Newlands Act. Cody assigned his water rights to the Reclamation Service in 1904, a dam site was selected in Shoshone canyon approximately eight miles upstream from the town, and work began on building and improving the road between the town and the dam site that spring. The reservoir created by the dam meant that the community of Marquette, at the confluence of the north and south forks of the Shoshone, would be flooded, requiring the removal or abandonment of the ranches and buildings there. 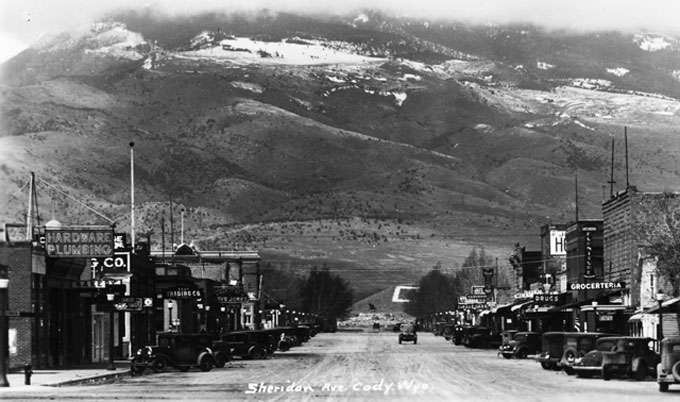 With the arrival of the railroad, and with federal money pouring in for construction of the dam, the town of Cody began to grow and to prosper. In 1909, the Wyoming Legislature created Park County from Big Horn County and made Cody the county seat. Elections were held for county offices the next year. By 191l, the county was fully operational. In 1912, oil was first discovered in Oregon Basin southeast of town, and other fields soon followed. After the excitement died down, the rate of town growth slowed somewhat, especially during World War I.

Buffalo Bill Cody died Jan. 10, 1917, and within six weeks, five prominent town citizens formed the Buffalo Bill Memorial Association. Led by Maggie Simpson, wife of prominent Cody lawyer Will Simpson (and mother of future governor Milward Simpson), the group agreed to capitalize on the $5,000 already authorized by the Wyoming Legislature for a memorial to Buffalo Bill. Buffalo Bill’s niece Mary Jester Allen and Caroline Lockhart, editor and publisher of the “Cody Enterprise,” were instrumental in engaging Gertrude Vanderbilt Whitney, well-known New York sculptor, to create the statue. Whitney picked out the site for the statue, purchased the land and donated it to the memorial association. The statue was dedicated on July 4, 1924, and three years later to the day the Buffalo Bill Museum opened.

After World War I, the nation began to travel once again and the town of Cody began growing again, in part through finding ways to entice Yellowstone visitors to stop there. The Cody Stampede, a rodeo (with other festivities) held annually during the Fourth of July weekend, was started in 1920 with Lockhart as president and continues to this day. The Cody Club, forerunner of the local Chamber of Commerce, even asked the citizens to “dress western” so as not to disappoint tourists.

In addition to tourism, Cody depends on the oil and gas industry. Several oil companies have operated here since the early discoveries in Oregon Basin. In 1938, Glenn Nielson brought his Husky Oil Company headquarters here and built a refinery near the Cody railroad depot north of town. In 1982, Husky was sold, and the refinery finally closed in the mid-1980s. Marathon Oil, meanwhile, bought the Husky headquarters building in Cody, and Marathon remains the primary oil company in the area.

Today, Cody has 9,500 year-round residents. It’s a popular stop for travelers on the way to and from Yellowstone just as Colonel Cody envisioned it, as well as a hunter’s and fishermen’s paradise. Irrigation has overcome the high desert climate enabling ranchers and farmers to succeed. Buffalo Bill’s legacy continues today at the Irma, the Buffalo Bill Historical Center, and numerous other businesses seeking to catch the eyes of tourists. In 1946, to commemorate Buffalo Bill’s 100th birthday, the dam and the reservoir were renamed after him, a fitting tribute.

Lynn Houze served as assistant curator at the Buffalo Bill Historical Center until she retired early in 2013, and before that as assistant curator of the Park County Historical Society Archives, from 1992 to 1999. Her books include two pictorial histories for Arcadia Publishing: Images of America: Cody (2008), and Cody, Then and Now (2011), and she is a coauthor of Buffalo Bill’s Town in the Rockies: a pictorial history of Cody’s first 100 years (Virginia Beach, Va.: Donning Company, 1996).

Visitors interested in the history of religions in the West will also want to see the Historic Cody Mural and Museum on 17th Street just north of downtown. Completed by artist Edward Grigware in 1951 and renovated in 2015, the mural is on a 36-foot-diameter domed ceiling in a Mormon chapel, and tells the story of the early years of the Church of Jesus Christ of Latter-day Saints. Other exhibits commemorate Mormon pioneers from Utah and Idaho who came to the northern Bighorn Basin in the early 1900s. Guests will also enjoy seeing a one-of-a-kind display of miniature furniture created by Western artist and designer Thomas Molesworth. Built and owned by the Church of Jesus Christ of Latter-day Saints, the building remains an active house of worship for area church members. The center is free and open six days a week, Memorial Day through late September. Click here for details.