Shoshone Cavern National Monument was the second national monument created in Wyoming and the only one in the state to be delisted and turned over to local government.

The cavern’s story offers interesting background for current debates over whether public lands in the West are best managed by local or federal governments. For four decades, the cave was managed by the National Park Service. In 1954, locals persuaded Congress to turn it over to the City of Cody, Wyo. After years of neglect the site passed back into federal hands in 1977, where it remains and is administered by the Bureau of Land Management. 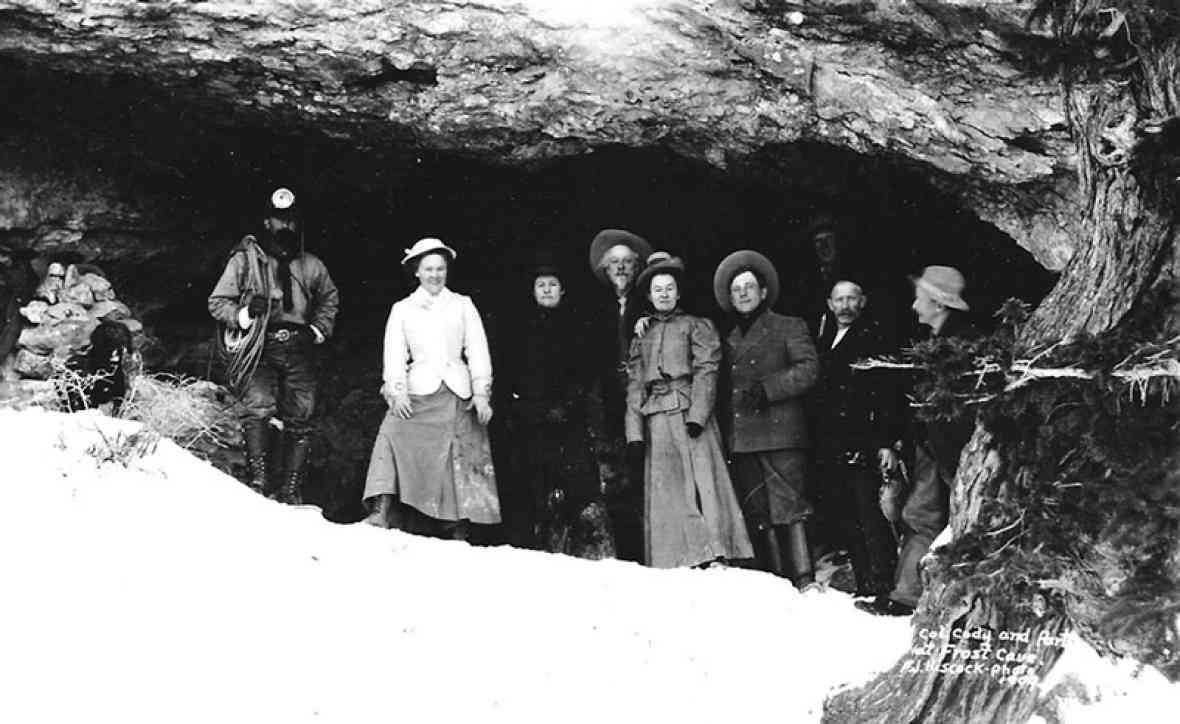 The cave was discovered by a man and his dog. Located on the east flank of Cedar Mountain, about five miles west of downtown Cody, the entrance was hidden below an outcropping.

One cold January afternoon in 1909, Frost was hunting on the mountainside—federally owned public land—accompanied by a large retriever. A bobcat, escaping from Frost's hunting dog, darted down the entrance with the dog in hot pursuit. Frost followed, soon discovering that he lacked sufficient matches to see much beyond the "great room" just beyond the cavern's entrance. Inside, he saw the first of what turned out to be hundreds of rooms linked together with tunnels. As a later visitor observed, the cave featured "a carnival of color running from red to purple, blue to yellow, brown to orange."

The day after his discovery, Frost reported his find, and, a few days later, an exploration party including Cody's founder and world-renowned showman, William F. "Buffalo Bill" Cody, inspected the cavern with lanterns and ropes. The cavern, in the view of Col. Cody and other visitors, warranted federal designation. Just nine months later, President Taft set it aside under the Antiquities Act.

The site was initially named Frost Cave, in honor of the discoverer, but the federal government believed the name implied cold temperatures in the cave, and suggested Crystal Cave as an alternative. Because of the proximity to Shoshone Canyon, a compromise resulted in the Shoshone Cavern name. 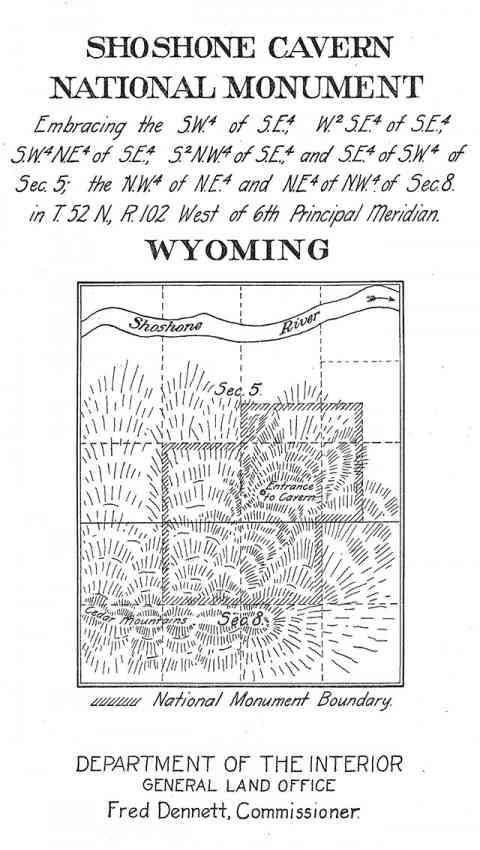 Surveyed to more than 4,000 feet below the entrance point, some experts believe the cave descends far deeper, perhaps running under the Shoshone River just north of Cedar Mountain and into the base of Rattlesnake Mountain to the north of the river. Geologists say the cavern was formed by hydrogen-sulfide-rich water, ascending aggressively inside cracks of the mountain, and creating crystalline encrustation on the cave's walls.

The National Park Service administered the cavern, along with the 210-acre site surrounding the entrance, from 1916, when the NPS was created, until 1954.

The cavern entrance, at an elevation of 6,300 feet--about 2,200 feet above the road along the floor of the Shoshone River canyon --made public access to the site difficult. In 1934, crews from the Civil Works Administration graded a narrow but passable automobile route that switchbacks up to the cave entrance. Even after minor improvements over the next two decades, the steep climb did little to encourage tourists to drive the road to the site.

Over the years, Park Service officials viewed the cave as interesting, but not as compelling as other NPS-administered caves such as Carlsbad Caverns in New Mexico or Wind Cave in South Dakota. The Park Service did little to resist the efforts of Wyoming advocates for "return" of the cave to local government. Some advocates said that future management of the site would be a test of whether public lands could be better administered by local and state government than by the federal government.

Amid great fanfare, Congress passed an act in 1954 delisting the monument and returning the site to local administration. On May 17, 1954, after many years of lobbying by Cody boosters who contended that the site could be better run if it were not in federal hands, the federal government turned over the site to the City of Cody. The site was renamed Spirit Mountain Caverns, based on a mythical tale of Indian observances in or near the cave.

But the city and private concessionaires slowly came to realize that that the task of improving and operating such a site was beyond their means and expertise. Local businessman Claud Brown leased the cave from the city, formed a corporation and sold stock to 300 shareholders. He planned to open the cave to tourists the following summer, charge a fee of $1.50 each and sell snacks and souvenirs. Work proved difficult and expensive, however, and the grand opening did not come until September 1957.

Brown made improvements, paving the parking lot and stringing electric lights in the cave. He announced plans for a $190,000 cable car to the site but was unable to raise the money. And tourists mostly stayed away.

Brown operated the site until the late 1960s when the cave was entirely abandoned. Another group signed a lease in 1972 but did nothing more. The Cody City Council allowed for the cavern and the site to be returned to federal ownership in September 1977. After that, the location was incorporated into surrounding federal lands and is currently administered by the U.S. Bureau of Land Management.

Experienced cavers may access the entrance to the cave, now sealed by a padlocked gate, through application to the Cody office of the BLM. Bureau officials say Spirit Mountain Cave, as it’s now generally called, draws 600 to 700 spelunkers per year.

The primary historical significance of Shoshone Cavern National Monument is that it was one of the few national monuments ever to be delisted. The fate of the cavern, practically forgotten today, is one example that argues against the proposition that public lands would be better served if they were overseen by local governments or private owners, a result entirely contrary to the assumptions of those who sought the delisting.

President Eisenhower signs a bill abolishing Shoshone Cavern National Monument as a national monument and turning the property over to the City of Cody.

Spirit Mountain Cave is high up on the east side of Cedar Mountain, about five miles west of Cody, Wyo. The good gravel road to the site is open to the public but the cave is locked. People wishing to explore the cave should call the Cody office of the U.S. Bureau of Land Management, (307) 578-5900, or stop by the office at 1002 Blackburn Street in Cody for a permit and a key. Office hours are 7:45 a.m. to 4:30 p.m. Monday through Friday.