In late September 1913, a hunting party made its way up the North Fork of the Shoshone River, north of the hunting lodge at Pahaska Tepee just east of of Yellowstone National Park. In some ways it must have been like any hunting party: Men awed by the scale of the wilderness, engaged by the camaraderie of their companions and eager to bag big game.

Yet because of who those men were, the hunting party was unique. Prince Albert I of Monaco was the first reigning European monarch to visit the United States. Col. William F. “Buffalo Bill” Cody, a form of American royalty in his own right, was an entertainer perhaps even more internationally famous than Albert. Their presence made this arguably the best-known hunt in Wyoming history. 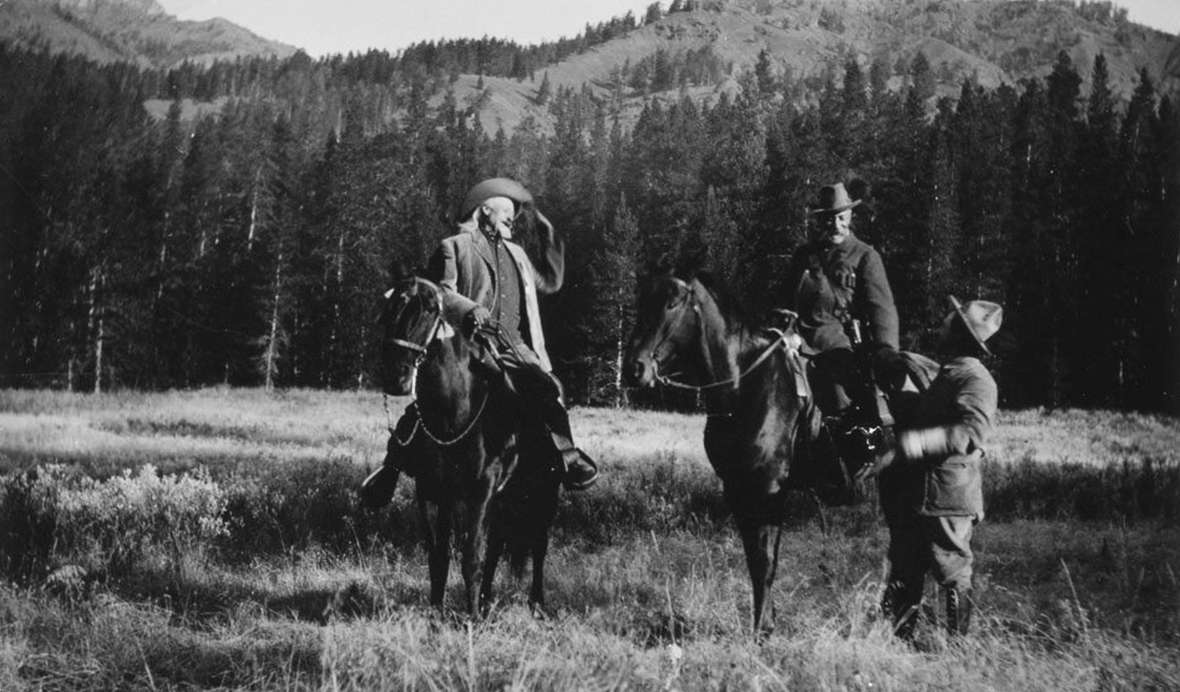 The trip was organized by A.A. Anderson, an artist, hunter, socialite and former superintendent of the Yellowstone Forest Reserve. During his sojourns in Europe, Anderson had met the prince. He invited Albert to join him on a hunt near his ranch in the mountains above Meeteetse, Wyo. But when Albert’s private train arrived in the town of Cody on September 15, 1913, he found a good deal else too.

The Park County Fair was underway, with rodeo events and Crow Indian dances. Furthermore, the fair was being filmed by a company co-owned by Buffalo Bill. This was in the early days of movies, two years, for example, before the silent blockbuster Birth of a Nation.

The Cody footage was intended for a film, The Indian Wars, which would set standards for the infant industry’s production values, narrative tropes, and attitudes toward Native Americans. Its climax was intended to be a sympathetic reenactment of the 1890 Ghost Dance tragedy, followed by scenes approvingly showing Natives assimilating into white culture.

While other company employees, including retired Army general Nelson A. Miles, began arrangements on the Lakota Sioux Reservation at Pine Ridge, South Dakota, Buffalo Bill instructed cameraman Charles Kaufman to capture plenty of scenes of the prince exchanging gifts with Chief Plenty Coups of the Crow.

Albert was also invited to oversee other fair activities, which were covered in newspapers as well as by Kaufman. The prince enjoyed this celebrity so much that he delayed the start of his hunt with Anderson. At the time, he needed some good publicity—because not all was well in Monaco. His tiny principality in southern France was known primarily for the gambling mecca of Monte Carlo. Gambling made the royal family rich and eliminated any need to tax citizens.

But Albert was an absolute monarch who had been facing three years of protests from subjects who wanted to establish a republic. Citizens were banned from the high-toned casinos, yet the small nation also lacked factories or farmland, and as a result unemployment was high. In 1911, Albert had created an automobile race and established a constitution, but neither had much immediate impact.

Meanwhile, the prince’s real love was outdoor life, especially oceanography. He owned research yachts and had made four cruises to the Arctic. Many of the cultural and business advances in Monaco itself—such as establishing an opera, theater and ballet—resulted from the work of his second wife, Alice Heine, from whom he was estranged.

At some point during the Park County Fair, or perhaps during preparations for it, Buffalo Bill inserted himself into the hunting plans. At the time, Buffalo Bill too was in bad need of good publicity. Now 67 years old, he was struggling to keep up with the times and nearly broke. His famed Wild West show could not compete with movies. Transport of performers and livestock to each venue was cripplingly expensive.

The latest version of Buffalo Bill’s show, a partnership with Gordon William “Pawnee Bill” Lillie, had recently been foreclosed on and its assets sold at a sheriff’s auction. Furthermore, Bill’s highly publicized 1904 divorce suit had tarnished his family-friendly image, though he and his wife had reconciled in 1910. Positive publicity could help his public image and his cinematic ambitions. 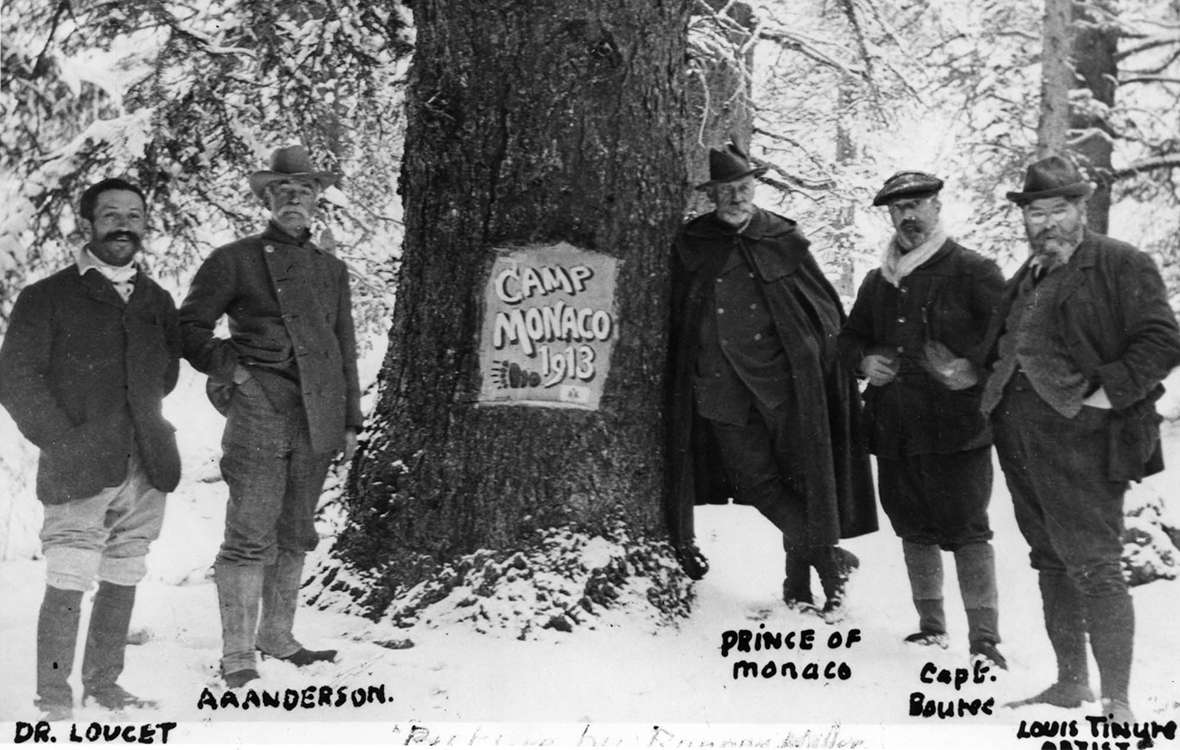 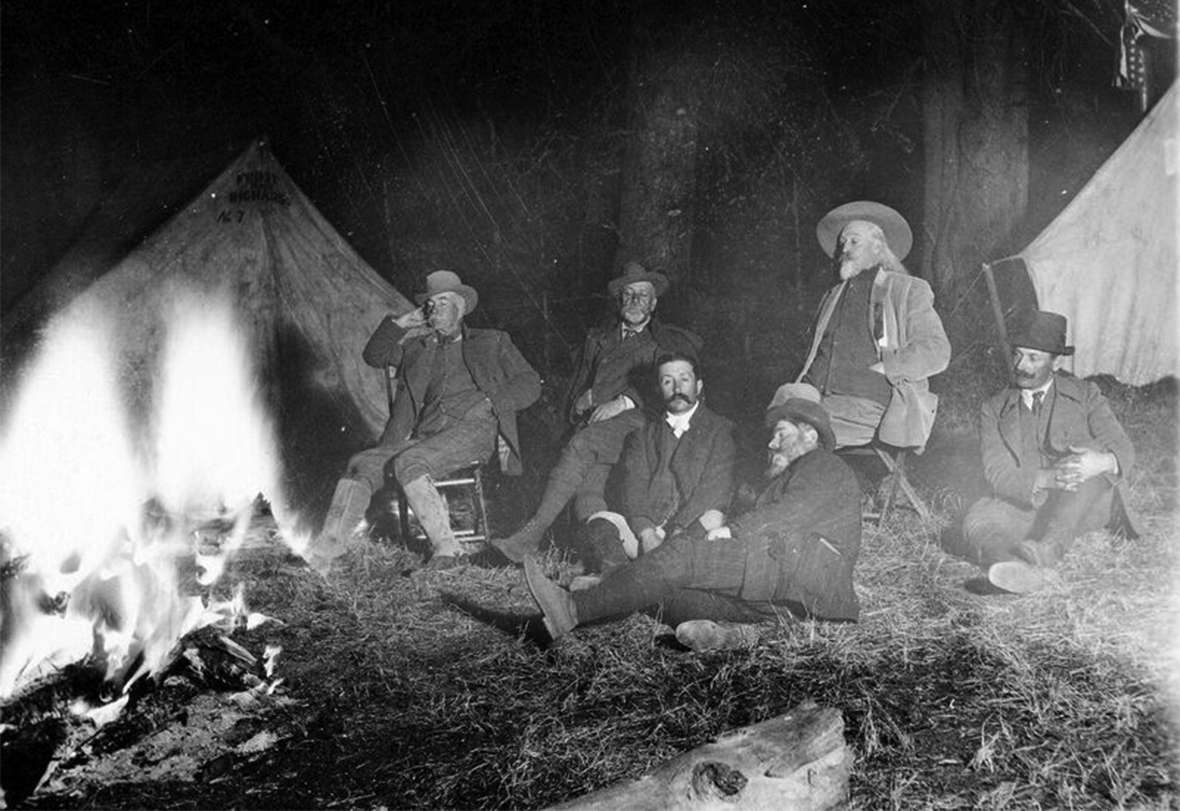 After the fair ended, Albert and Anderson spent a week successfully hunting on the Greybull and Wood rivers in the mountains above Meeteetse. Then on September 28 they traveled with Buffalo Bill from Cody towards Yellowstone Park up the North Fork of the Shoshone. Given the celebrity of Prince Albert and Buffalo Bill and the fact that they would be traveling with a film crew, dozens of others wanted to join them.

For example, Charles G. “Spend a Million” Gates, gadabout heir to a barbed-wire fortune who once bragged that he spent a million dollars a year in tips alone, stayed overnight with them at Pahaska Tepee, Buffalo Bill’s lodge near the east entrance to Yellowstone National Park. Although Gates had hired guides through Buffalo Bill, the next morning the Gates party (and guides) left Pahaska in a different direction from the royal party.

They made camp about 10 miles north-northeast of Pahaska at Torrent Creek. On a massive spruce tree five feet in diameter at the center of the camp, Tinayre carved out an area that he painted with a bearpaw print and the words “Camp Monaco 1913.” In one famous photograph, Albert, Dr. Louet, Bourée, Anderson and Tinayre posed in the snow around the tree.

Several other photographs recorded camp life, as did some film footage. Kaufman filmed Buffalo Bill doing chores, including chopping wood; the implication was that the trip’s organizer was too busy and important to participate in the hunt. In fact, however, Buffalo Bill and Kaufman left Camp Monaco almost immediately after arriving, because their film crew was overdue to shoot at Pine Ridge.

The hunt was successful: Albert had a wonderful time; he shot and killed a bull elk and a large black bear. The Northern Wyoming Herald reported that he was “well pleased.” He spent an extra several days in camp, delaying the departure of his private train from the Cody station.

Stories and images from Camp Monaco permeated the press. For example, the Denver Post ran the Camp Monaco story under a full-page headline. The Post’s owners happened to be Buffalo Bill’s financier-partners in the film company; they also sent a reporter to chronicle the filming at Pine Ridge.

The Camp Monaco sojourn turned out to be the last big hunt of Buffalo Bill’s life. He died four years later. However, the movie resulting from his film company’s footage, The Indian Wars, flopped. (The nitrate film has disintegrated over time, and only a few scraps remain.) He had not been able to adjust to this new era; his final years involved continued financial difficulties.

However, publicity surrounding the royal’s visit and the hunt proved beneficial to the local hunting and dude ranching industries. Cody became known as a destination for trophy-level hunting.

Camp Monaco inherited the fame of its inhabitants. The site, which today features the stump of the old spruce tree, regularly appears on area maps and in hunting magazines. The 200-plus-year-old tree was one of the most famous victims of the 1988 Yellowstone fires; the fires killed it but did not consume it. In 1994, a 5,000-pound portion of the spruce containing the campsite sign was removed by helicopter. It’s now in the collection of the Buffalo Bill Center of the West in Cody.

Albert’s great-grandson, Prince Albert II of Monaco—the principality is now a constitutional monarchy—has visited Cody three times, and on his 2015 visit spent three days at the old campsite. As keenly interested in environmental affairs as his ancestor, Albert II has endowed a Camp Monaco Prize of $100,000, which is awarded every three years by the Buffalo Bill Center of the West to support integrated scientific research and public education initiatives.

The notion of Buffalo Bill’s last hunt still seems poignant, especially in light of the image of his chopping wood in camp, and of his attempt to evolve from Wild West impresario into a movie maker friendly to Indian people.

From one point of view, he is redeemed in his old age, having progressed from hunter and scalp-taker to caretaker with progressive attitudes toward indigenous cultures. In another interpretation, the Camp Monaco experience—with the triumphant frontiersman demoted to working basically as a servant to a moneyed class from elsewhere—is a metaphor for the decline of the romance of the West.

As sportsmen’s magazine Outdoor Life described the view of guide Lee Livingston in 2014, Camp Monaco represented “the transition of a frontier buffalo hunter to a big-game outfitter, the violent American West reduced to a vacation destination for Europe’s royalty. This wilderness went from a landscape to be feared to one to be protected.” 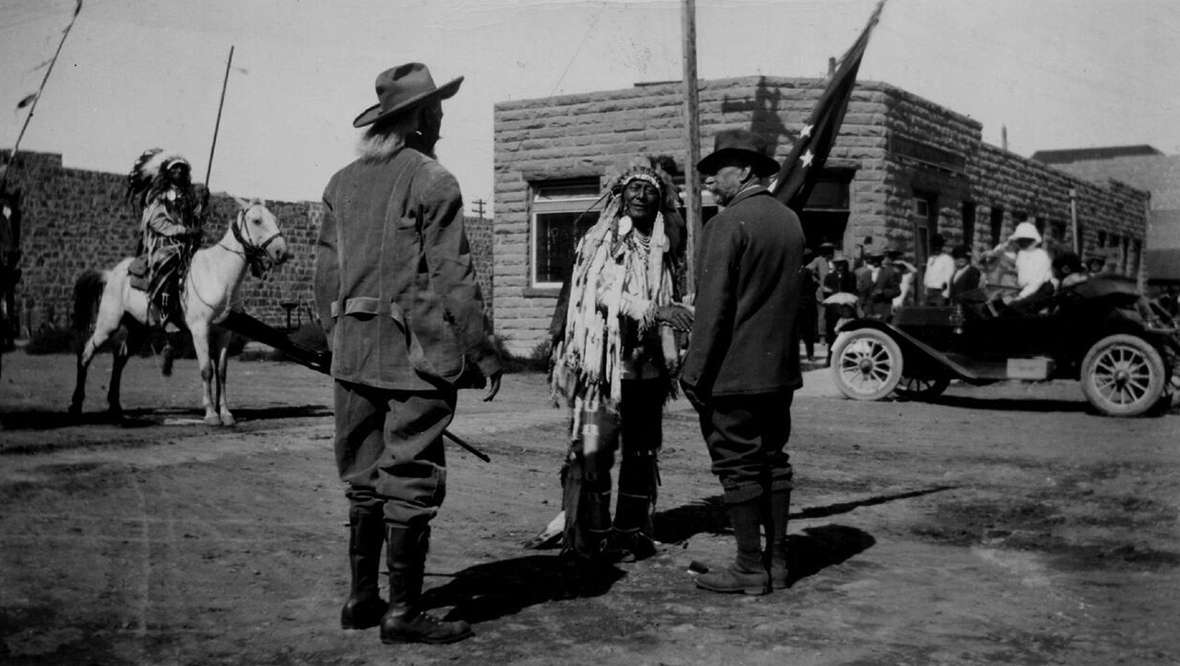 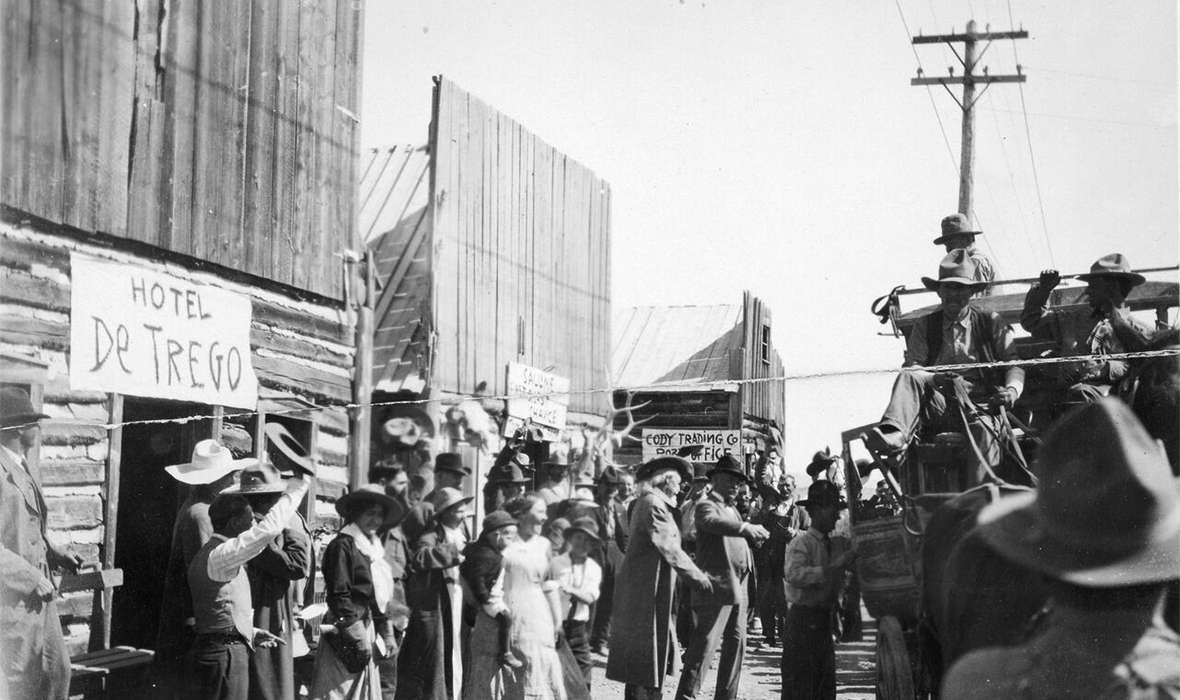 Visitors to the Buffalo Bill Center of the West (details below) can see a display that includes the trunk of the Camp Monaco spruce tree with its distinctive sign.

Prince Albert of Monaco and Buffalo Bill Cody leave Cody, Wyo., to hunt big game out of Camp Monaco on the North Fork of the Shoshone River.

More about Pahaska at Wyoming Places

Camp Monaco, where William F. “Buffalo Bill” Cody hunted big game with Prince Albert of Monaco in September 1913, was more than 10 miles north of the present Pahaska Teepee, a lodge and gift shop on U.S. Route 14/16/20 just east of the East Entrance to Yellowstone National Park. The site, in the North Absaroka wilderness, is accessible by trails open only to hikers and horseback riders. The area is frequented by grizzly bears; visitors should take appropriate precautions. For more information, call the office of the supervisor of the Shoshone National Forest in Cody, WY, (307) 527-6241.

The Palette Ranch is now part of the Hoodoo Land and Cattle Company, run by the family of famed Texas oilman H.L. Hunt. Hunts purchased the ranch in 1948. It’s private land, not open to the public, but people can drive up the Pitchfork Road, on the opposite bank of the Greybull River, to the Jack Creek campground, where they can depart from a trailhead for Warhouse Creek and other upstream destinations. Warhouse Creek enters the Greybull about two miles upstream from the campground; A.A. Anderson’s studio, on Warhouse Creek inside the Washakie Wilderness Area of the Shoshone National Forest, is further up Warhouse Creek from there. For more information, contact the offices of the Shoshone National Forest in Cody, Wyo., or phone 307.527.6921.