Construction of Buffalo Bill Dam, six miles west of Cody, Wyoming, was the key that opened about 90,000 acres in northwestern Wyoming to irrigated farming. So dry and forbidding was this part of the state that it was one of the last regions in the United States to be settled. It wasn’t until the 1890s, with dreams of irrigating the region and turning it into productive farmland, that a significant number of people began to settle there. 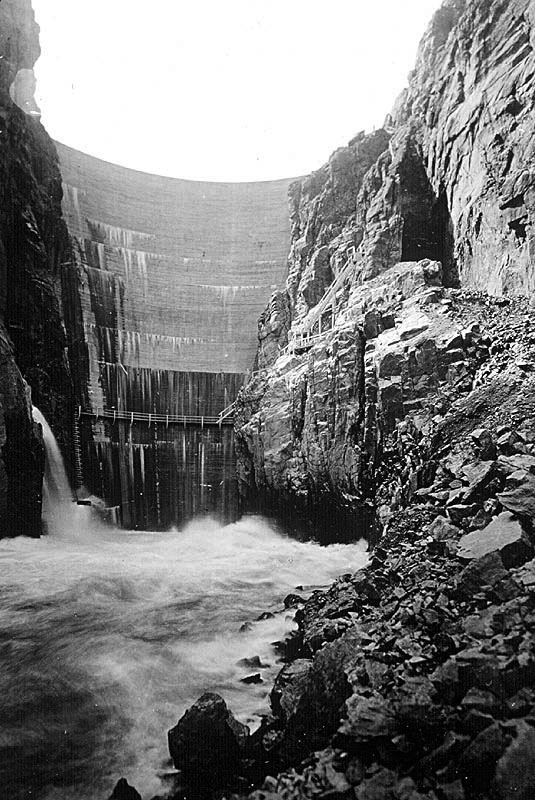 Among the visionaries were William F. “Buffalo Bill” Cody and a group of investors who formed the Shoshone Land and Irrigation Company, founded the town of Cody, and acquired water rights from the Shoshone River to irrigate 60,000 acres. When the project proved cost prohibitive, the Wyoming State Board of Land Commissioners turned to the Federal Government for help. In early 1904, Buffalo Bill transferred his water rights to the Secretary of the Interior, and that July exploratory drilling began for Shoshone Dam--renamed Buffalo Bill Dam in 1946 in commemoration of the one hundredth anniversary of Cody’s birth.

When completed in 1910, Buffalo Bill Dam stood as an engineering marvel, one of the first concrete arch dams built in the United States. At 325 feet high, it also was the highest dam in the world (surpassing New York’s Croton Dam).

Buffalo Bill Dam was an American triumph touted, along with completion of the Panama Canal, at the 1915 Panama-Pacific International Exposition in San Francisco. Here the U.S. Reclamation Service, barely a dozen years old, erected an exhibit featuring an idyllic forty-acre irrigated farmstead set in a desert valley rimmed by beautiful mountains.

This was Wyoming’s Bighorn Basin modified to serve human needs through construction of Buffalo Bill Dam, a structure so significant that it was listed on the National Register of Historic Places within the first five years of the register’s creation.

The dam was part of the Shoshone Project, which comprised a system of tunnels, canals, diversion dams, and Buffalo Bill Reservoir. Today, the project irrigates more than 93,000 acres, where principal crops are beans, alfalfa, oats, barley, and sugar beets. Although the number of irrigated acres never reached the 150,000 acres originally projected by project proponents, the figure has increased steadily over the years: from 25,753 acres in 1915 to 41,331 acres in 1928 to 77,560 acres in 1953.

“It really is critical for our livelihood, and is so important to the people in the northern Bighorn Basin,” said Beryl Churchill, an author whose family farm in nearby Powell has depended on the water for decades. In fact, the city of Powell, which blossomed on the desert as the water began to flow, was laid out near the spot where the men building Buffalo Bill Dam pitched their tents. 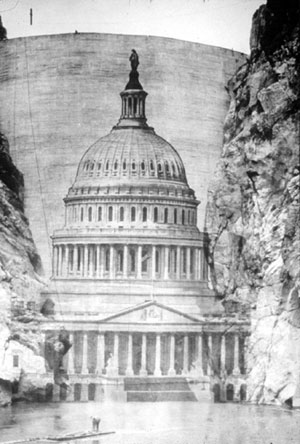 “When I go to a school to talk to kids about the dam or irrigation projects, the first thing I do,” Churchill told the Billings (Montana) Gazette in January 2010, “is show them an old picture of a man standing out in sagebrush and cactus, with not a tree in sight.” Not only did the dam make the desert bloom, but today Buffalo Bill Reservoir and its state park offer camping, fishing, boating, and other outdoor recreation.

What a different place it was in the autumn of 1905 when construction began on the barren, sparsely populated sagebrush flats. A contractor and men, mostly new immigrants from places such as Italy and Bulgaria, had to be imported.

One contractor quit before the dam was complete, and the workers staged Wyoming’s first labor strike, demanding and getting more than $3 a shift, about 30 percent more than the going rate in the Rocky Mountain region. Supplies were a problem, and once a road was built, it took a stout-hearted freighter to drive his team up the rocky lane, the towering cliffs of the Absaroka Range on one side and a straight drop to roaring waters and jagged boulders below on the other.

The Shoshone was no ordinary river to dam. It drained an almost entirely mountainous area and, with neither of its forks longer than 50 miles, the flow was rapid and powerful, dropping more than 7,000 feet by the time it reached the narrow canyon of the dam site.

The rapid flow created trouble in the summertime when winter runoff came roaring down the river, bringing boulders and uprooted trees with it. So high was the water in the spring of 1908 that a newly dug foundation pit flooded and workmen had to start over.

November brought freezing cold, and workers, seven of whom would die during construction, had to heat the sand and gravel before mixing and pouring concrete. When laborers poured the last bucket on January 15, 1910, the mercury registered 15 below zero. In all, they had poured 82,900 cubic yards of concrete, completing a dam designed with engineering theories developed to analyze stress factors--a forerunner of today’s trial-load method for large arch dams.

Buffalo Bill Dam, its Shoshone Power Plant (completed in 1922), and ongoing irrigation projects also played a significant role during World War II. In the frenzy following the December 7, 1941, attack on Pearl Harbor, the Federal Government relocated 120,000 people of Japanese ancestry from the West Coast to 10 inland internment centers. Among them was the Heart Mountain Relocation Center, a National Historic Landmark, situated on 21,521 acres near Powell, Wyoming, on the Shoshone Project.

At its peak, the Heart Mountain Relocation Center housed 10,767 people, many of whom worked on sections of the canal system originally slated for contract work, but which now supplied water to irrigate fields of the internees. Internees succeeded in growing a cornucopia of vegetables, including green beans, peas, carrots, spinach, beets, corn, tomatoes, and potatoes, as well as barley and wheat, and crops that reflected Japanese tastes, such as Chinese cabbage, daikon, takana, misuna, and nappa.

In the first five months of 1944, internees excavated 2,816 cubic yards of canal, in addition to other canal and road work. At a time when much of rural America did not have electricity, Heart Mountain, with the nearby Buffalo Bill Dam and historic Shoshone Power Plant, was an exception.

In 1993, the crest of the dam was raised, adding a needed 260,000 acre feet of storage capacity in Buffalo Bill Reservoir. 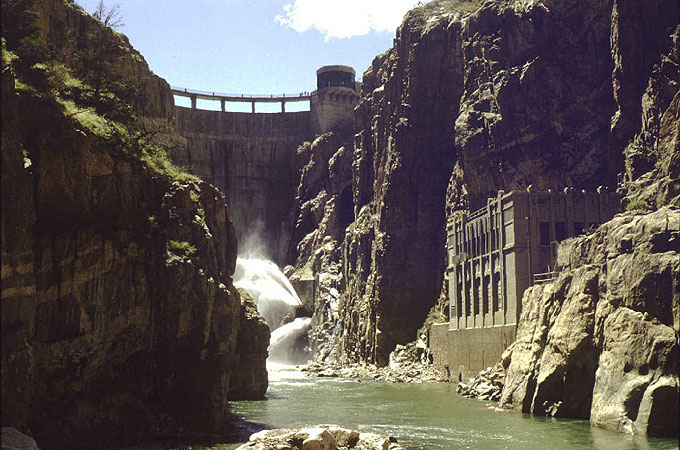 The illustration of the Buffalo Bill Dam superimposed on the U.S. Capitol is from the Bureau of Reclamation Archives, and was used in the original version of this article, accessed March 15, 2013 at http://www.cr.nps.gov/nr/travel/ReclamationDamsAndWaterProjects/Buffalo_Billl_Dam.htm.

All are used with thanks.

Laborers pour the last bucket of concrete to complete the Buffalo Bill Dam west of Cody, when the mercury registers 15 below zero.

More about Buffalo Bill Dam and Reservoir at Wyoming Places

Buffalo Bill Dam is six miles west of Cody, WY, on U.S. 16-20-14 (Yellowstone Hwy.) A visitor center at the dam is open daily May 1-September 30. Visitors may stroll to the top of the dam, view exhibits and a short movie in the visitor center or rent a self-guided audio tour.

The State of Wyoming maintains Buffalo Bill State Park, with two campgrounds and a picnic area, on Buffalo Bill Reservoir. Most facilities are open May 1-September 30. For more information, visit the website linked above.